Good Lord, three years of cruising along both sides of the Caribbean, and we have to deal with a hurricane as we come within spitting distance of home!!
Scott’s been watching the tropics closely all summer, and we cannot believe how quiet it’s been, as we traveled up the Bahama island chain, into Florida and through the Carolinas. Things began to heat up while we were in the Outer Banks, and we kept a watchful eye on the developments as we traveled north, into and through the Dismal Swamp, and on to the Chesapeake and Virginia’s Eastern Shore.
Our plan was to cross back over to the western side of the bay, but worked on a plan B, C and D as we watched Florence, and waited to see where she would actually land.
On Tuesday, we crossed the Chesapeake, entered into the Potomac River and headed for a marina in Lodge Creek, located several turns into the Yeocomico River. Any possible surge would get dispersed on this path, taking the impact down several notches.
We settled into a stressful slip situation for Scott, with short poles made taller with weak boards, but Scott made it work, using longer lines to tie to more poles than usual. We have to do the Hokey Pokey to get off the boat and up the pier, but we’re secure. 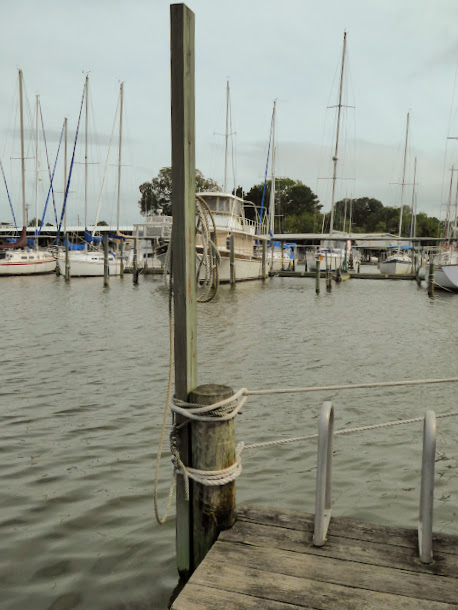 Here you can catch sight of our Intracoastal “mustache!” 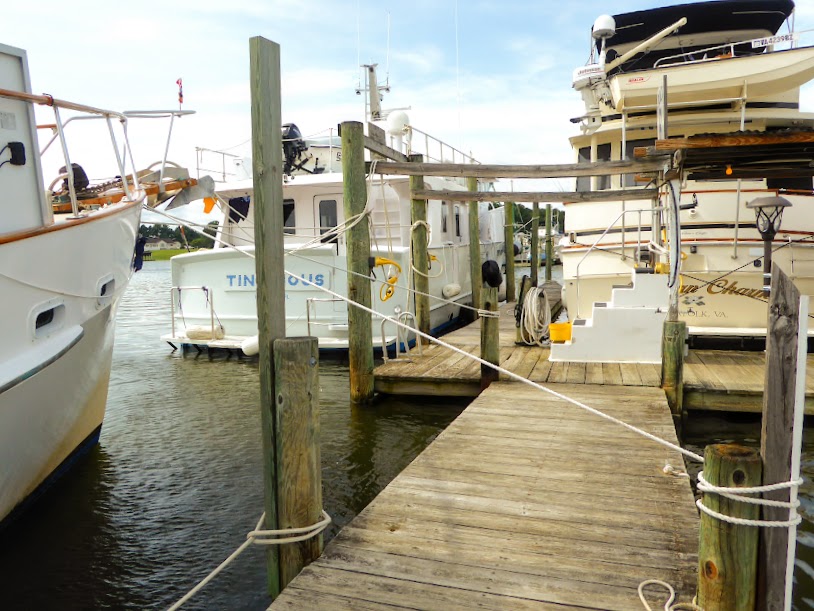 Scott went to the local hardware store, and bought wood to make fender boards. Our fenders press against the boards, keeping us off of the pier, while the boards rides up and down the poles. He also sealed the doors and windows with tape. After our crazy refit, we are leek-free when at anchor and into the wind; but in a slip, with rain and wind coming at us sideways, possibly torrential, it was smart to be proactive. 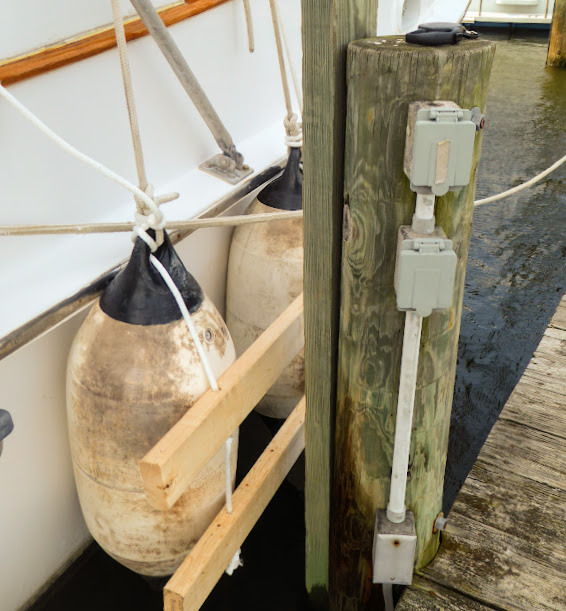 Howard was on hand to supervise, wearing his walking jacket. Without it, he gets far too curious about other people’s boats, and tends to hop on for a look. 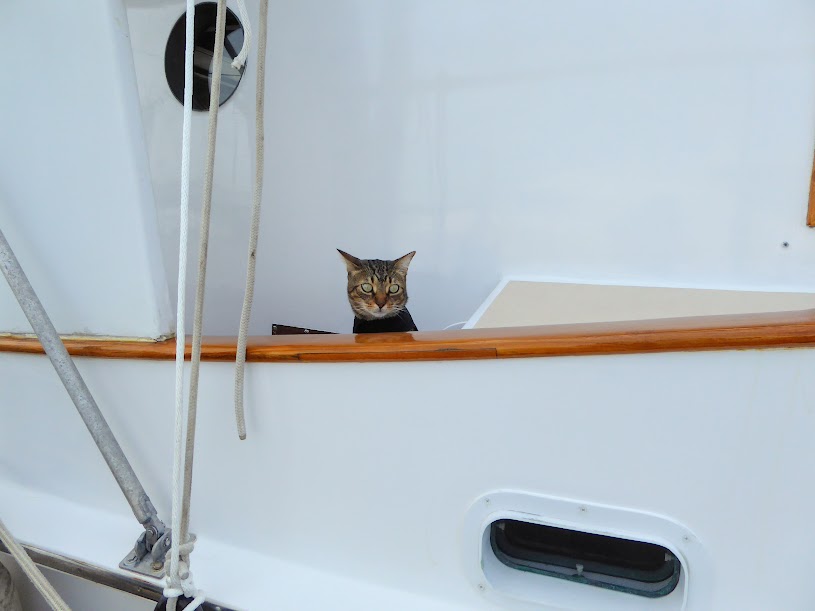 As the storm’s landfall was predicted to move more and more south, our forecast got better and better…whew! We’re just getting cloudy, breezy weather, with occasional rain. High tide cover the piers a few inches, but a new moon has been causing this for the last week. Days ago, we were predicted to get a 1-3 foot surge, with much rain as the storm looped north, but now that forecast has improved as well.
Thankfully, Florence missed us, but several of our friends are in its path. We have friends in the Charleston area, including one on their boat, who are trying to sell. They all headed inland safely, and some are already back in their houses, as that area now won’t be so badly affected.
Other friends left their boats in Oriental, North Carolina, and, right near New Bern, North Carolina, which seems to be ground zero for surge and rain right now. Our poor friend Jon was tearing his hair out in California, waiting for news, but we just heard today that all is well with his boat!
While watching Florence’s path, we’ve also been thinking about our friends in the Caribbean, as Isaac threatened the area from St. Barths to Grenada. Thankfully, the storm lost strength as it passed by Dominica. And Helene seems headed for our friends across the pond, in the UK…a busy month!
Here’s hoping the rest of the season is quiet, as we prepare to leave here mid-week and head for Annapolis. At the end of the month, in just a few short weeks, weather allowing, it’s on to Baltimore!!
“Shells Sink, Dreams Float. Life’s Good On Our Boat!”

On Saturday, I jumped into my trusty courtesy car and went to visit my parents for lunch. They had a new roof put on, and are now getting the siding done, so I got to meet the crew; it’s looking great.

That afternoon, our neighbors Rich and Sue invited us to a pot luck dinner on the pier. We are at the end of a long, covered pier, that dog-legs about two thirds of the way down. The dog leg is the gathering place for the regulars, and there’s always someone there to greet you as you come through.

I panicked when we were invited, having no idea what to bring (we haven’t fully stocked up on groceries yet). Then I remembered that I had a peanut butter truffle cake, that the AWESOME girls from Sugarbakers gave me, in the freezer. Woohoo, I was set!

Scott and I wandered up to the dog-leg at about 7pm, as the spread was being set out. All the food was terrific, but the pista resistance was the huge platter of freshly caught and fried (on site at the dog-leg) perch. It was awesome! We both had seconds of everything, especially fish, and were glad that everyone enjoyed the cake (thanks girls!).

The B Pier group welcomed us in, and made us feel like regulars. Can’t say enough good things about this Olverson’s place!

On another note. Years ago, Scott found an old Pennzoil Motor Oil jar in one of my parents out buildings. He’s saved it all of this time, and has now cleaned it out (really?), and has filled it with his own spiced rum. Scary thing is, it kinda looks like motor oil!

We’re currently staying at Olverson’s Lodge Creek Marina. It’s about 30 minutes from my parents’ farm, and we don’t have to take the boat too far up the Potomac to see them. Lodge Creek is tucked up at the end of the Yeocomico River, off of the Potomac River (check out our Where In The World Are We? page, to see detail of the location).

So we chose it because of it’s location, and it’s also very affordable, which is great too. It’s also a terrific marina! Fred Olverson and his staff are more than welcoming and even MORE than accommodating.

Fred has 60-some acres (forgive me if I’m a bit off on that, Fred) here, that includes the marina, huge amount of land storage (boats, RVs, cars, etc,), heated pool, a farmhouse that you can rent out, pavilion, free bikes, ice on the honor system, and FIVE courtesy cars!

Courtesy cars are the bomb. We discovered them on our trip south in the winter of  2008-2009 (If you’re interested, check out the blog we kept). Marinas have cars available to transient slip holders, to use for grocery store, west marine, etc. They’re usually always on the honor system, and you can use them for an hour or so, depending on demand. No money, no driver’s license, just ask to use the car, and they give you a key.

Now mind you, these aren’t dealer cars, or usually even gently used cars. We’ve driven all kinds of makes, models and years…and in all state of wear! On occasion, we’ve also used personal cars of marina managers and dock masters. We haven’t noticed them in Maryland, but usually don’t have a need for one when we travel around the bay in the summer.

Olverson’s is courtesy car gold! Fred has FIVE cars to use, at anytime. Unlocked, with keys in them ready to go. This is terrific for us, as we don’t have to go back and forth, trying to use my parents’ car. We happily jumped in a Jeep Grand Cherokee last night, to go to dinner…what a treat! I can also use it for both a Walmart and grocery run, before we head down the Intracoastal. It’s a terrific perk.

Honor system ice is also great. The bins are unlocked, with ice prices posted on the doors. There’s a box nearby, that you can drop your cash in. No worry about whether the office is open, to go pay someone or get a key.

Here’s an aerial view of Olverson’s:

If you find yourself in the area, please stay with Fred, at Olverson’s. Friendly staff and slip holders, helpful perks and a tranquil location. Thanks Fred!