We left Key West on a Friday morning. Our weather window wasn’t big enough to make it all the way to Mexico, so we decided to head toward the Dry Tortugas, and anchor off of Fort Jefferson, shaving about ten hours off of the total journey. This also provided a good anchorage for us to wait for another window to continue on to Mexico.

We needed to come into Fort Jefferson with decent daylight to navigate the shallows. The days are shorter now,  so we decided to break the trip into two days. We traveled three hours to the Marquesas Keys on Friday. The Marquesas Cays are just a few tiny spits of land. We need too much water depth to anchor inside of them, so we stayed on the outside, using them for shelter against the wind.

Howard surveyed his surroundings, scanning the water for fish. 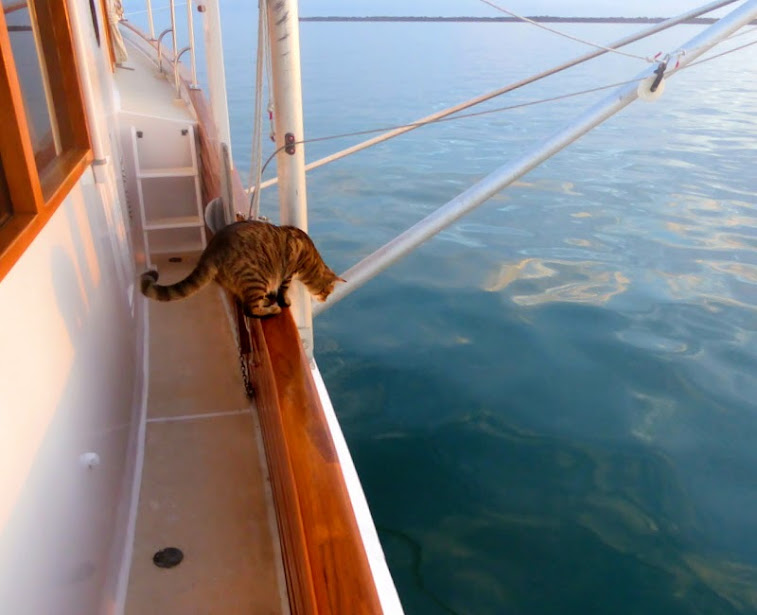 The Tortugas were first named Las Tortugas (The Turtles) by Ponce de Leon. Soon after, they read “Dry Tortugas” on mariner’s charts, showing that they offered no fresh water (dry), but plenty of food (turtles). The area became a wildlife refuge in 1908, and was named a national park in 1992.

Speaking of marine life, as we anchored, we were greeted by some of the local Goliath Groupers whole live here. Goliath is correct, they are huge!!! 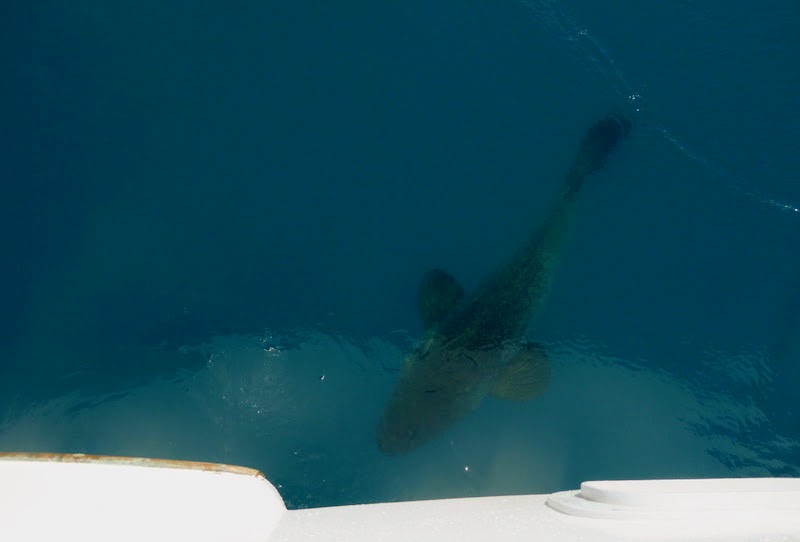 We first anchored outside of the harbor area. Scott had read that it was still protected by the reef, but offered more room for us to swing.  As the winds kicked up, we took a beating the first day, with Scott even being a bit seasick from the rolling at anchor. After watching numerous fishing boats take better shelter in the harbor, we headed in and found a spot. Scott was nervous, as the area didn’t allow for us to let out as much anchor scope as he would like. Never the less, we set our anchor and settled in to wait for good weather to travel on to Mexico.

Here are some photos of our trip from Key West to the Dry Tortugas.

We are shoving off this morning, to make our way toward Mexico!

Last night we spent time in some of our favorite Key West places, and said goodbye to friends here. We also met some new faces..Key West locals, by way of Maryland! Thanks for welcoming us Joe and Provie!

After a five hour run today, we’ll anchor for the night in the Marquesas Cays, and then head for the Dry Tortugas tomorrow. We’ll wait there for a good weather window, to continue on to Isla Mujeres, Mexico. It’s a two day run, and we’ll most likely be waiting close to two weeks in the Dry Tortugas for weather..ugh! Internet will be non existent until we get to Mexico, so I’ll upload posts in a few weeks, when we get settled.