Leaving the quiet, scenic town of St. Pierre, we made our way just a few hours along the coast of Martinique, to the capital city of Fort de France. It was a good next stop, and offered larger stores for groceries. Along the way, we again enjoyed scenic views of this beautiful island. 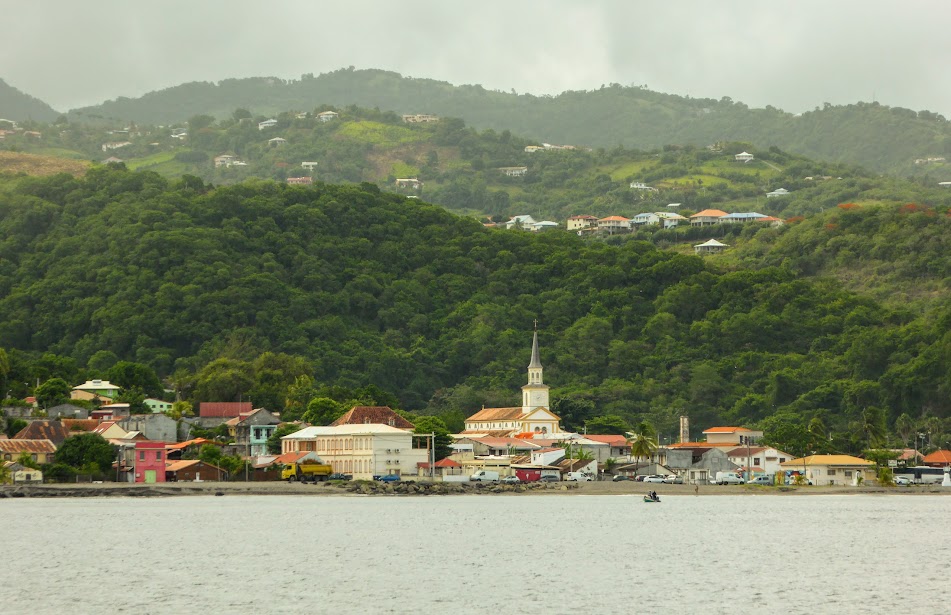 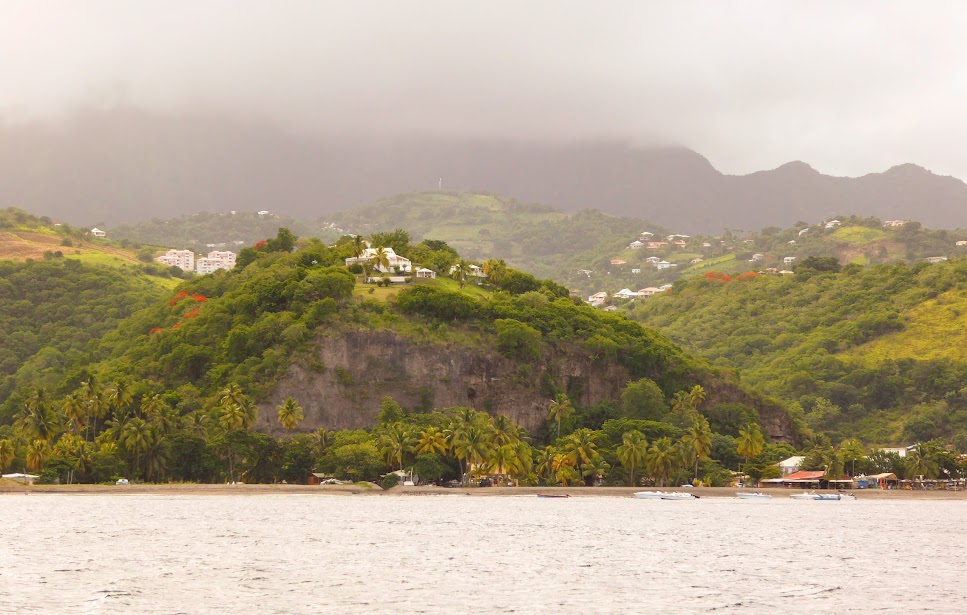 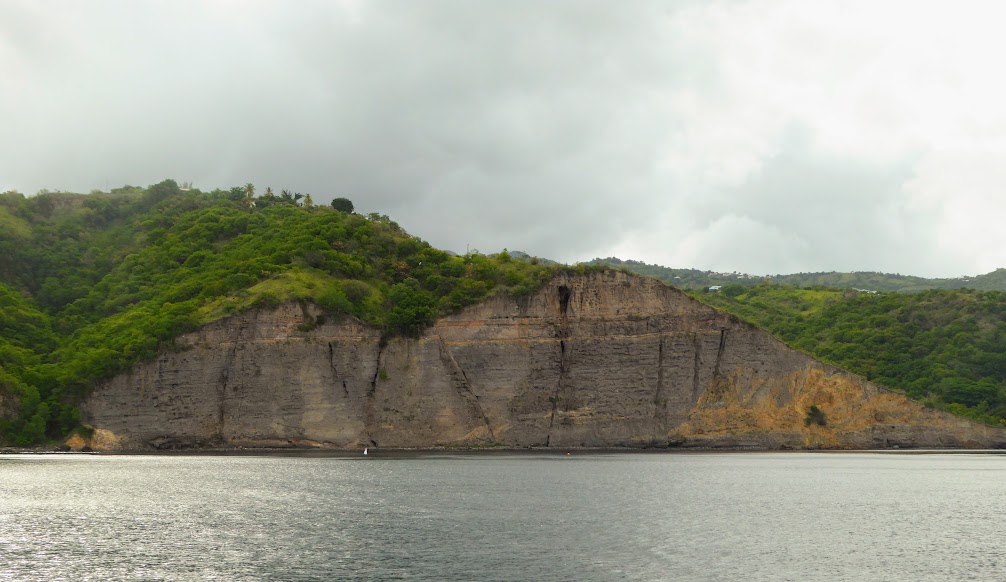 Fort de France became economically important after the eruption of Mount Pele, and the destruction of the town of St. Pierre in 1902. In addition to being the capital of Martinique, it’s also one of the major cities in the Caribbean, exporting sugar, rum canned fruit and cacao. I found some good aerial views of the city online: 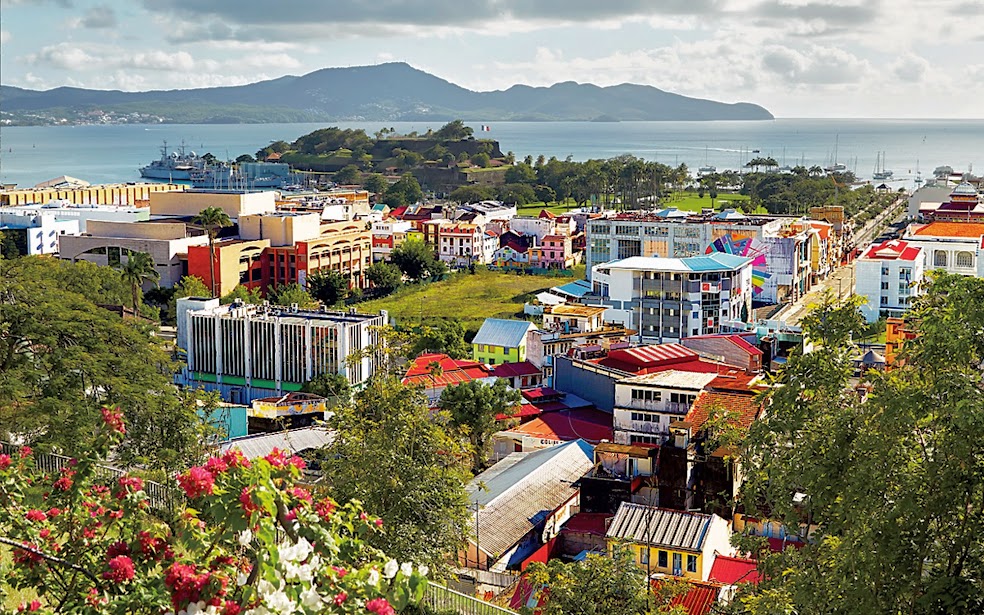 The capital city has recently reinvented itself as a cruise-ship destination, with the construction of two new terminals. As we approached the harbor, it was clear we’d have an imposing neighbor nearby. 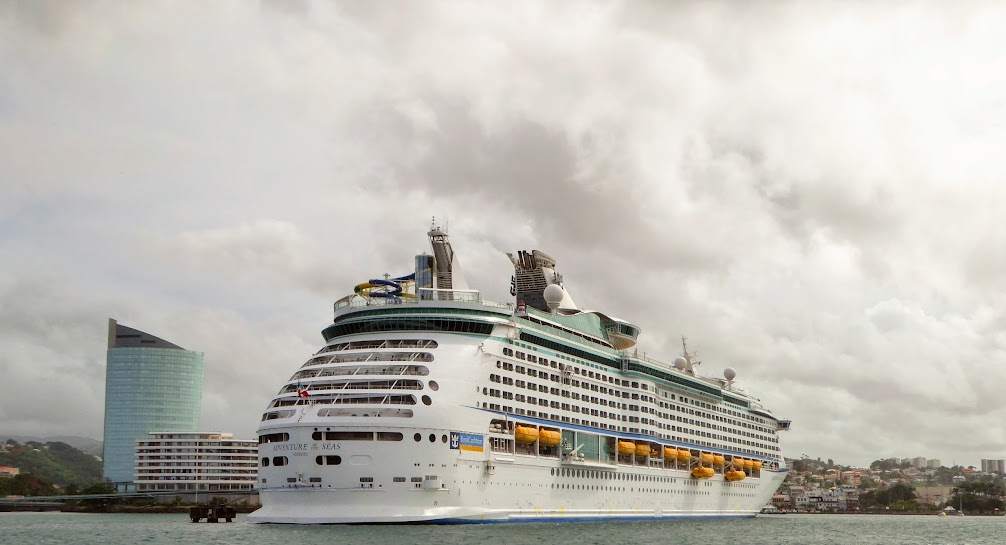 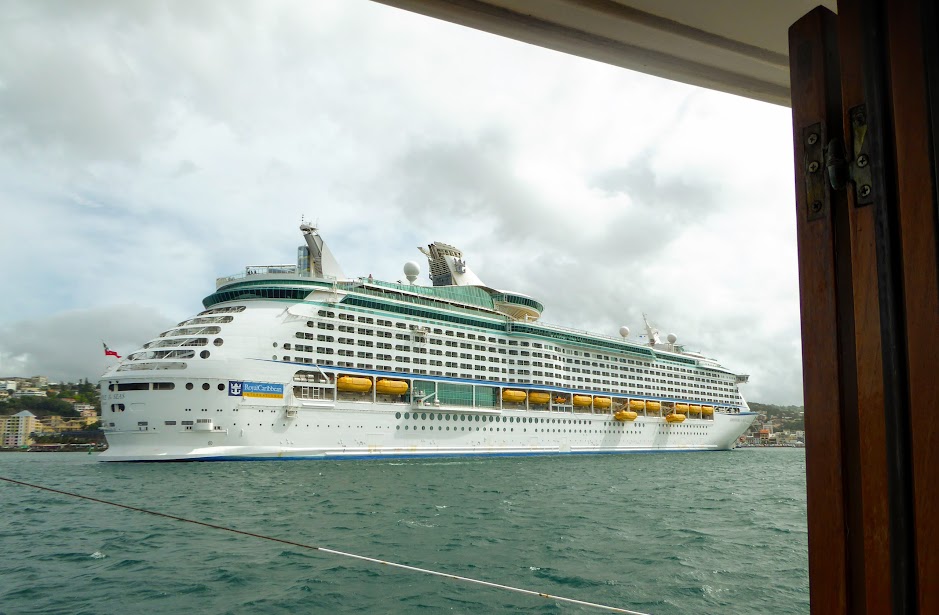 We anchored just off of the downtown area, and in view of Fort St. Louis, which is still in use by the French navy.

(Notice the McDonald’s in front of the cathedral, Scott was  thrilled.) 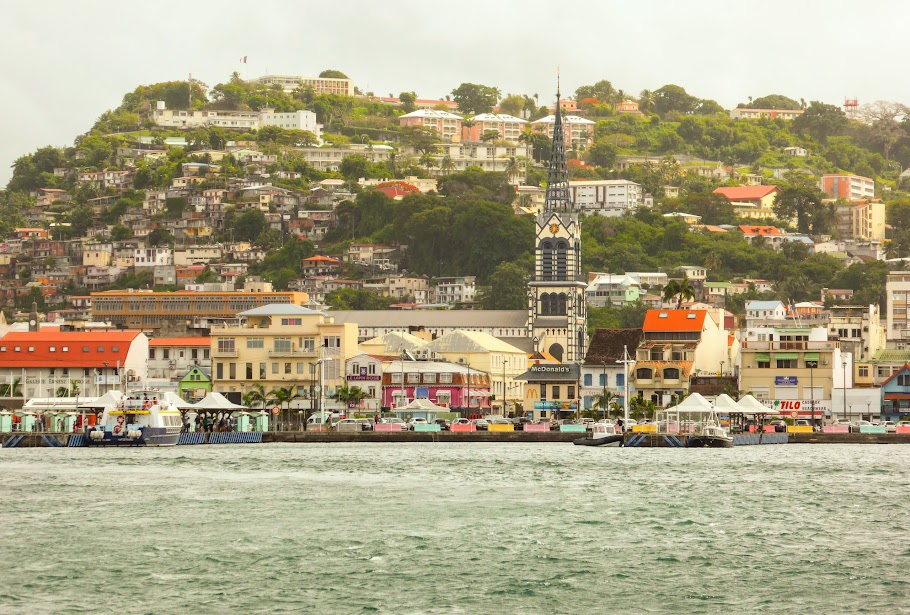 We enjoyed our first evening watching the cruise ship crew test lifeboats, and bracing ourselves against the wakes of the constant ferry traffic going to and from the town dock. 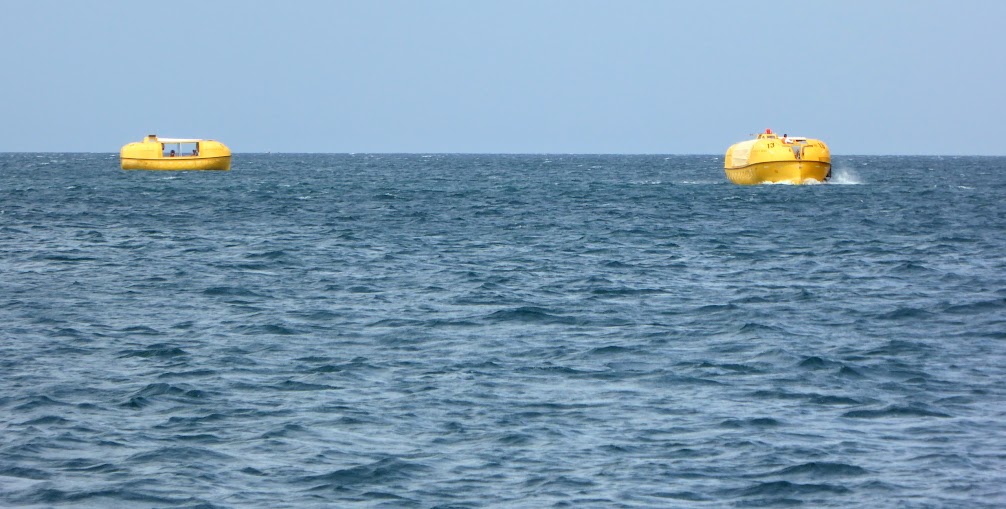 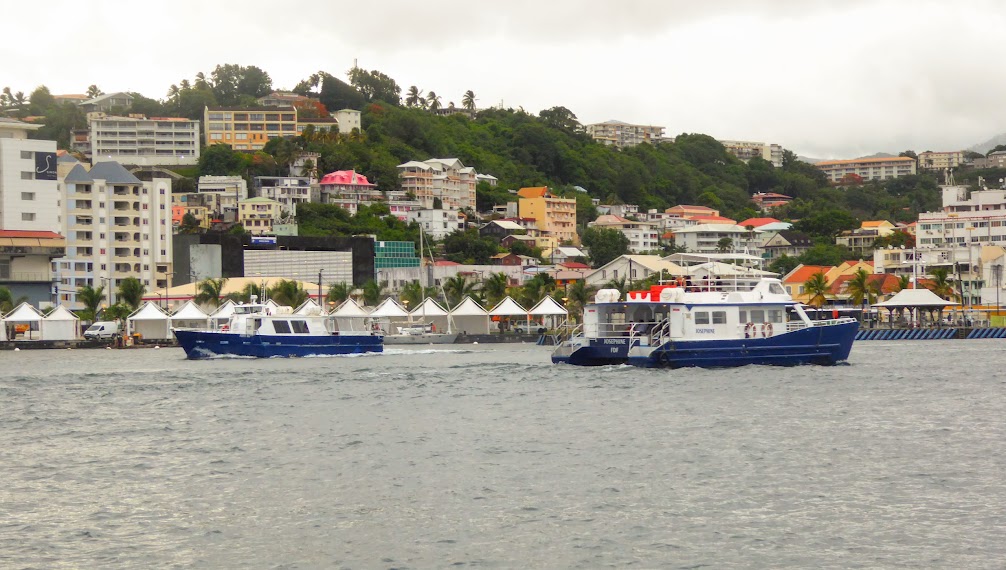 The many wakes were worth the colorful sunset views over the city.

In the morning, we made our way to the dinghy dock and into town, zigzagging the narrow, colorful streets. 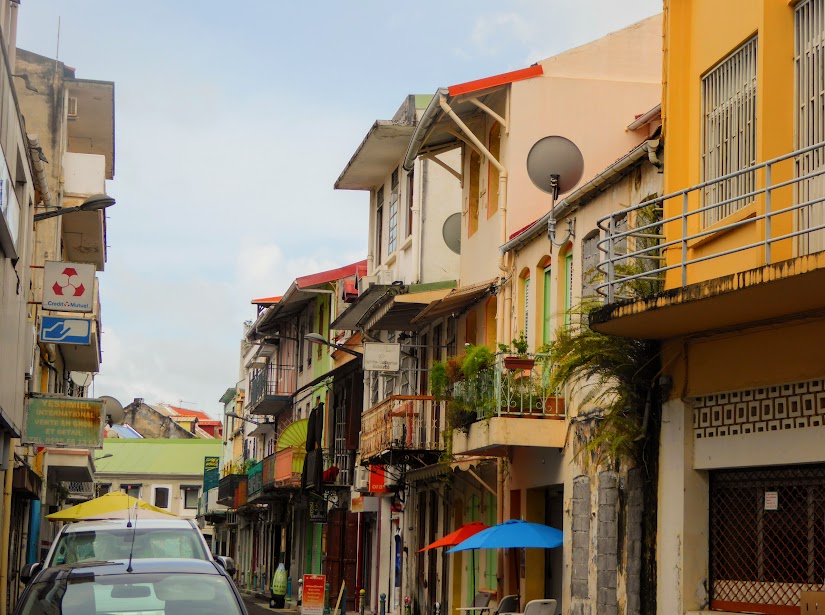 We turned a corner, and came upon the colorfully ornate Bibliotheque Schoelcher (Schoelcher Library), at the edge of the city’s park. (the lighting was horrible in my photos, so I borrowed some online) 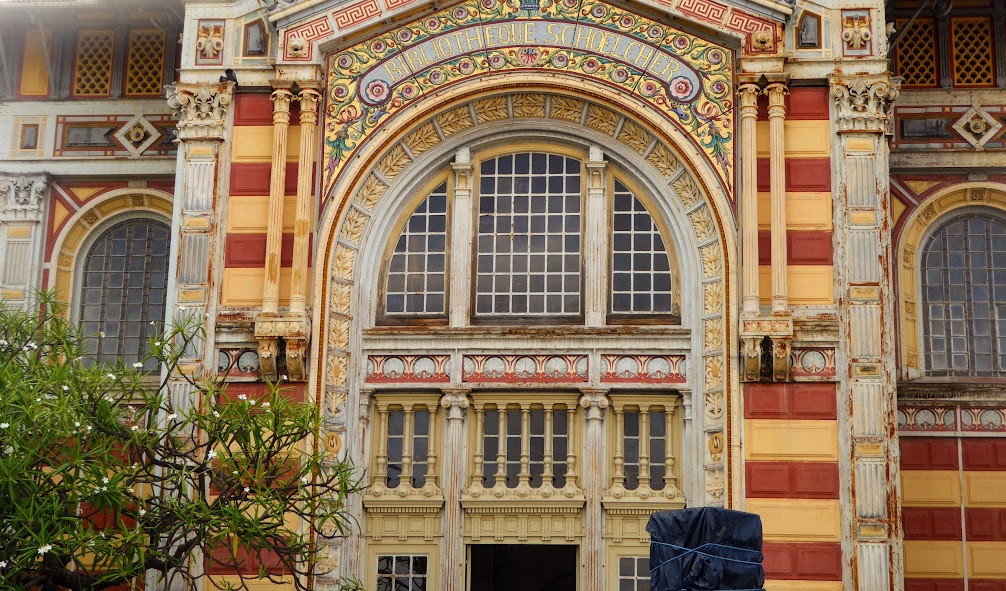 Abolitionist, writer and politician Victor Schœlcher left his vast library of 10,000 books to the General Council of Martinique in the late 19th century, on the condition that they should be kept in a private library open to all, with the intention of educating former slaves. Today, the library houses over 300,000 books. 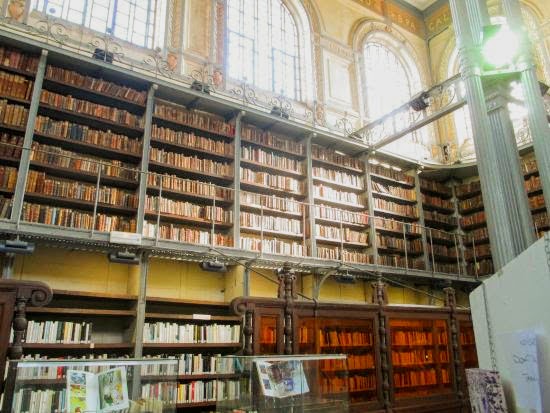 We learned that the building was created in Paris, and then shipped to Martinique in pieces to be assembled…impressive! 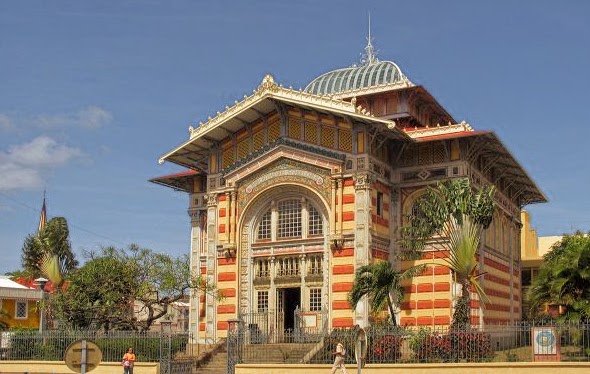 Just blocks away is the St. Louis Cathedral, the seventh to have been built at this site. (I borrowed this photo online, due to construction fences around the entire base of the cathedral when we visited) 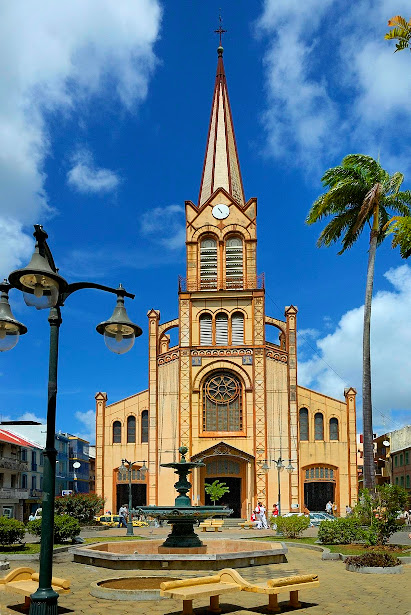 What we found most impressive about the cathedral is that the present one was completed as far back as 1895. It was designed by Henri Picq, who also envisioned the Bibliothèque Schœlcher.  This current cathedral is constructed with an iron frame and reinforced concrete, which has contributed greatly to its longevity. 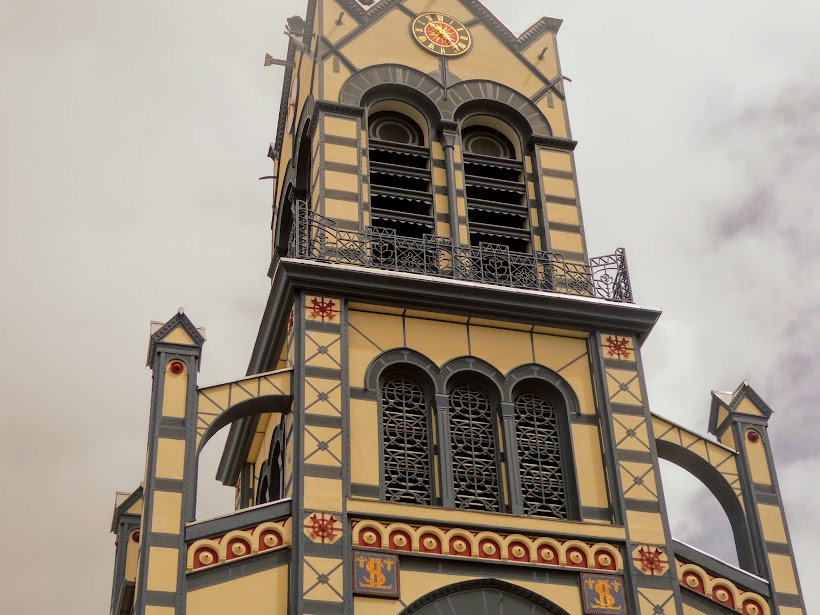 Inside, we learned that the wooden pulpit, 19 stained glass windows, organ and wrought-iron railing are all original to the 1895 structure. 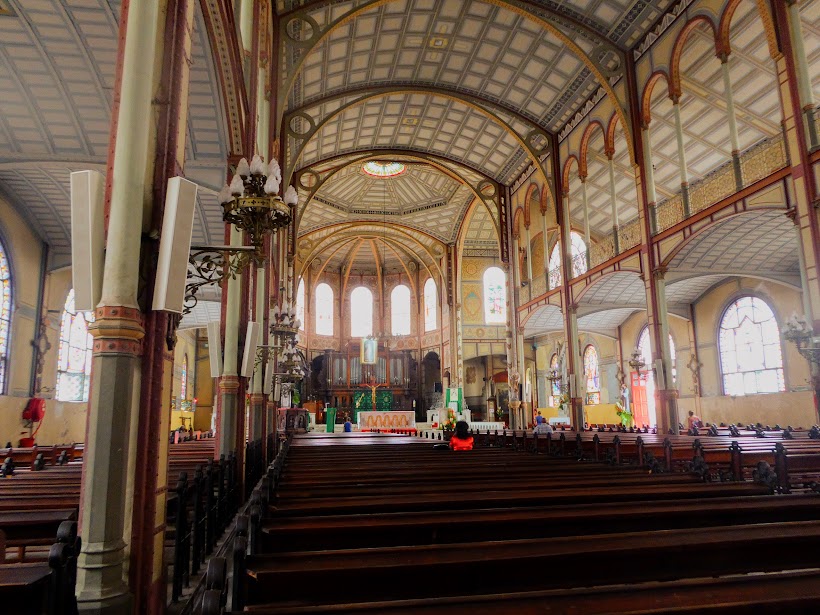 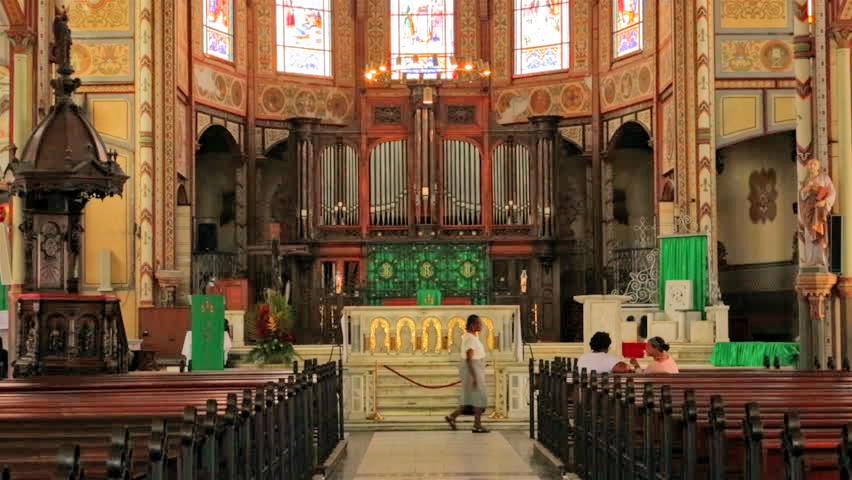 Scott stopped for a McDonald’s fix, and then it was on to Leader Price, a local grocery store. We perused the aisles, and bought a few things at good prices. With groceries in hand, we called it a day. 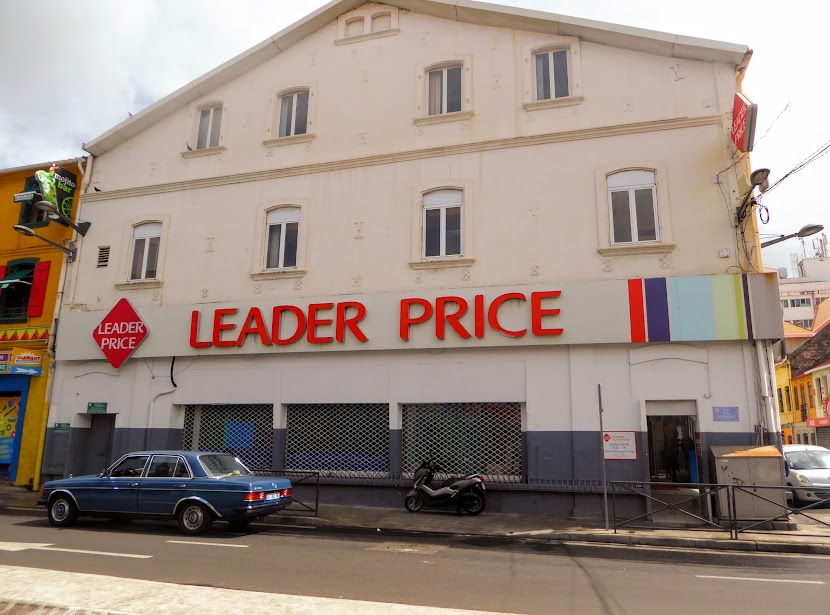 The next morning, it was back into town to clear out of Martinique. As I mentioned previously, clearing in and out of the French islands is far less complicated than other islands in the Eastern Caribbean, and much easier than on the western side. Computers are located in various shops throughout the islands, and except for a few euros paid to said shops for the service, the process is free. Find a computer, fill out the online form, pay at the register, and receive your printed clearance papers…done!

However, there are a few challenges: obviously, the language can cause some confusion when filling out forms, and European keyboards are a bit different than what we’re used to…just enough to cause frustration. We stopped in at Sea Services to clear out, and Scott managed the process just fine, despite a small boy looking over his shoulder. 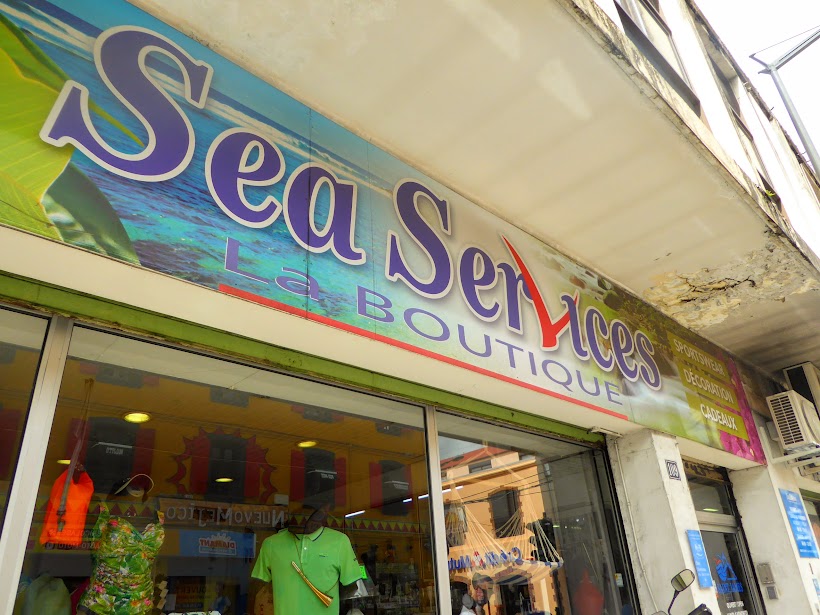 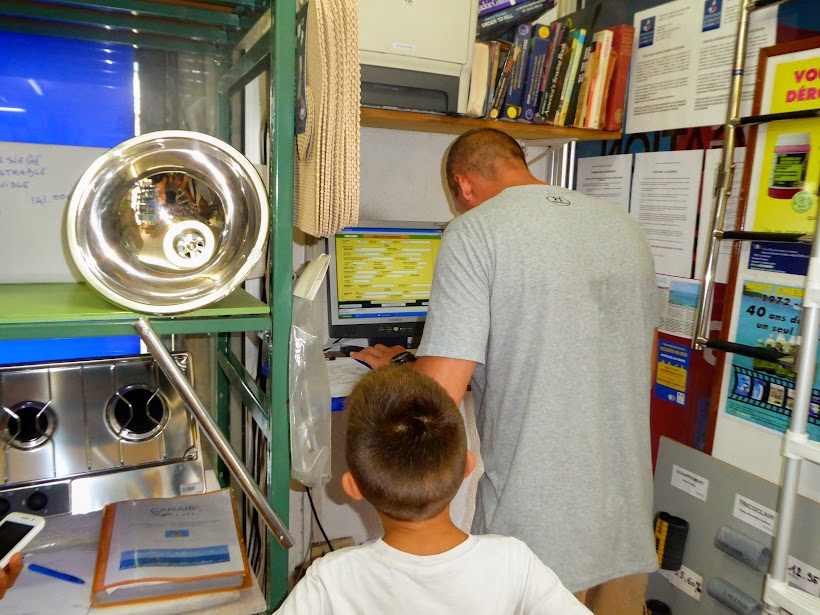 Once cleared out of Martinique, we had 24 hours before having to leave. We set off to find the local mall, where another grocery store was located. Along the way, we poked our head into the local open market, before finding the mall just a few blocks away. 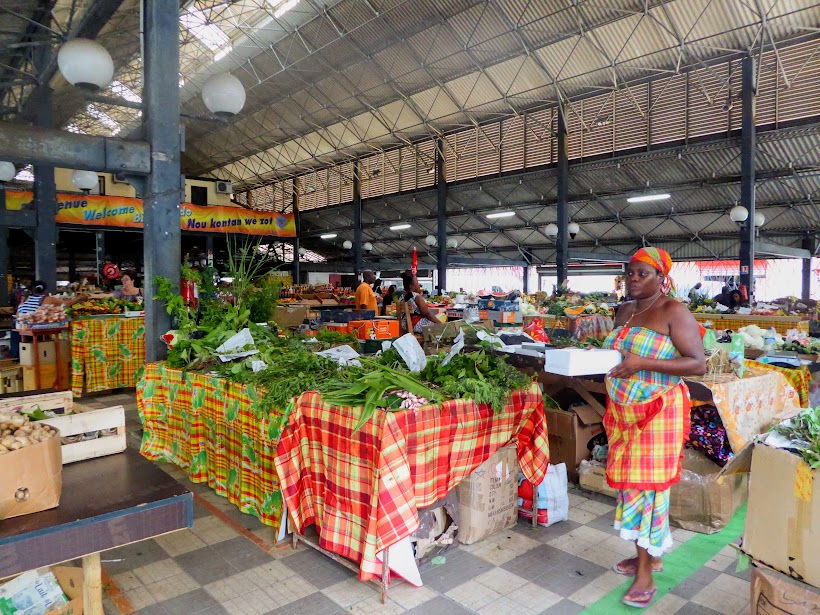 It was strange to see a large grocery store inside of a mall, but Carrefour did not disappoint. We came out with more groceries, and cheap, French foods. Wine, cheeses and other yummy items are incredibly affordable on the French islands. 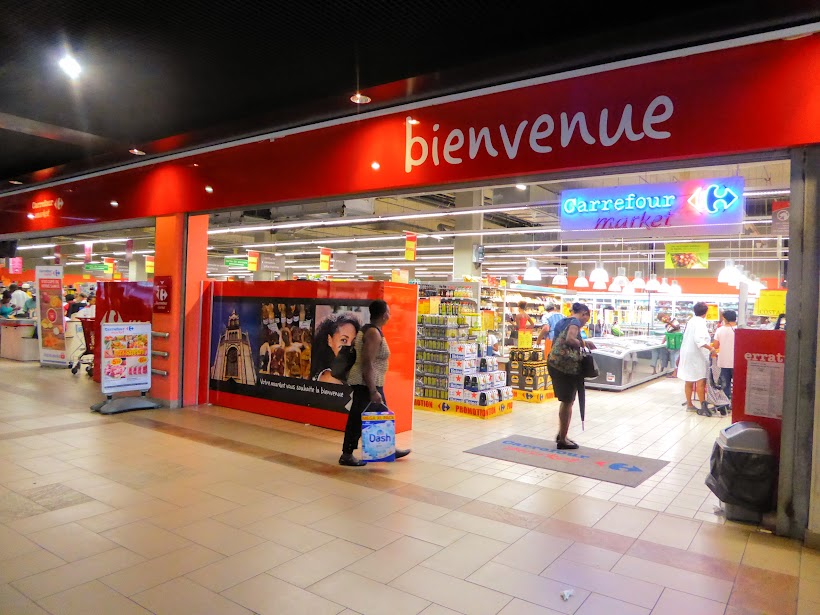 We made our way back to the dinghy, using strange, revolving gates to cross the main street. 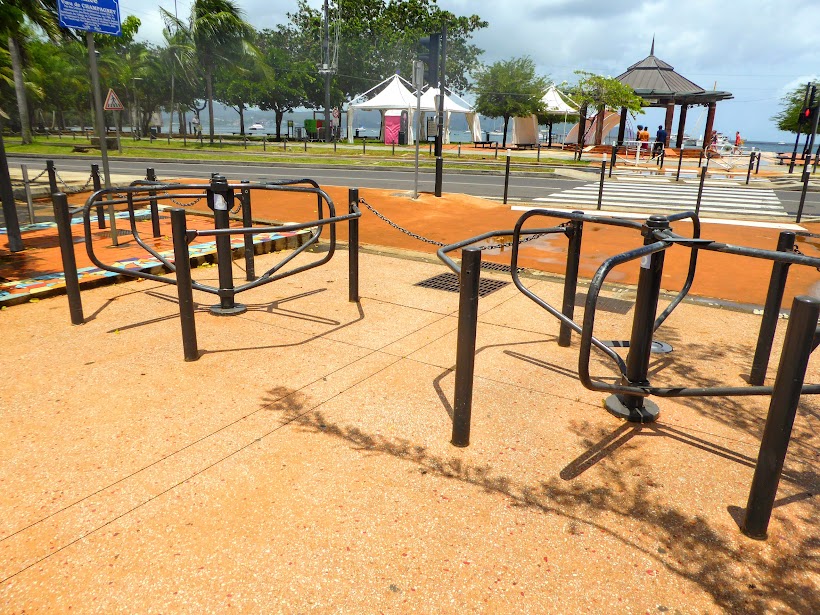 Scott was in love with the dinghy dock here. It was huge, with plenty of space for dinghies. The edge was covered in stainless steel, providing a smooth, kind surface for inflatables, and offered many stainless rings for tying off. 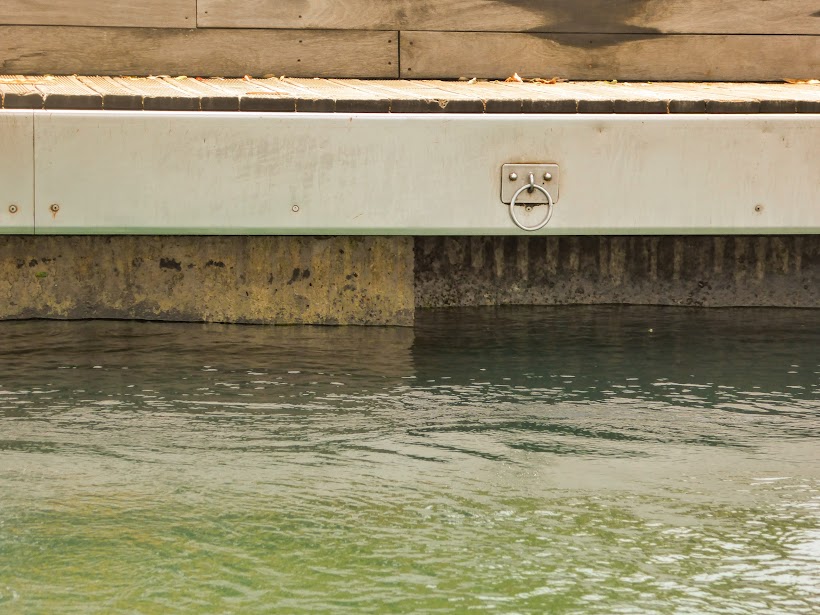 Later that evening, we returned to town for dinner at one of the many food stalls lining La Savane park, near the waterfront. I was so hungry, I forgot my camera, so here’s an online, aerial view.

We opted for kabobs, and they were nothing like I expected…much more delicious! Chicken was carved off of a spit, similar to a gyro, then placed on bread that was thinner than a pita, but thicker than a tortilla. Next, yummy garlic sauce was added, followed by tomatoes, peppers onions and…wait for it….french fries! Then, for the “piece de resistance,” the whole thing was wrapped like a burrito and placed in a hot press.

Whoever came up with this thing was a food genius. The wrap of awesomeness was yummy in my mouth, long after I was finished eating it. We hope to visit Martinique again, to explore more of the island, and will definitely make a pit stop at Fort de France, for another fix.

Our short stay in Fort de France was over, as winds were good to make another jump toward Grenada. We were leaving one beautiful island and heading for another; next stop, St. Lucia. Here are a few more photos.