Karen and I did an impromptu tour of Truman’s Little White House, while riding bikes around the island. The tour was great, and we learned many interesting details. I didn’t have my camera with me, so I “borrowed” some pics from the internet.

In November 1946, President Truman had finished 19 months in office, but was physically exhausted. His doctor ordered a warm vacation, so he flew to Key West and stayed in a house built for the base commandant of the Navy (there was no commandant at the time, so he displaced no one).

His second vacation came in March 1947, and this set the pattern for additional visits every November–December and every February–March. Changing technology allowed the President to communicate with multiple political or world leaders at one time and he could summon staff to Key West for a meeting in a three hour flight from Washington. Truman realized that where the President was, the White House was (convenient!). Consequently, documents issued from the Little White House read: The White House, US Naval Station, Key West, Florida. Truman spent 175 days of his presidency at the Little White House in Key West, FL. 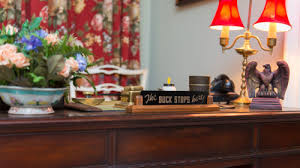 Truman’s bedroom and personal desk. Mrs. Truman had a separate bedroom, so that she wouldn’t be present if they had to wake the president for something official during the night. They did have a connecting bathroom!

During the Truman visits, Cabinet members and foreign officials were regular visitors for fishing trips and poker games. He regularly had more visitors and staff than bedrooms, so the presidential yacht traveled with him, bringing along his piano and poker table! The yacht also offered more communications that the one phone line Key West had at the time.

Eventually, Mrs. Truman had a poker table made for the Little White House, that had a table-like cover. She thought that it was in bad taste for people to see a poker table in the president’s house. It has inlaid holders for poker chips, and the ashtray are formed from old shell casings.

Truman visited Key West shortly after his 1948 re-election, and Division Street was renamed Truman Avenue in his honor. After Truman left office, he returned to Key West several times and stayed at various other places.

In 1948-49 General Eisenhower held a series of meetings here that resulted in the creation of the Department of Defense. He returned in December 1955 and January 1956 as President to recuperate from a heart attack.

President Kennedy and the British Prime Minister held a one day summit here in March of 1961. President Kennedy made a second visit in 1962, immediately following the Cuban Missle Crisis. During this time, Key West was entirely surrounded with barbed wire fencing, and guns were stationed all along the perimeter.

The house served as the Naval Station commandant’s house until 1974, when the base was closed due to the Navy’s conversion from diesel to nuclear submarines.  On February 12 of that year, it was added to the U.S. National Register of Historic Places, and in 1991, the house opened as a state historic site & museum.

Former President Jimmy Carter and family had a reunion here in 1996. In April, 2001, Secretary of State Colin Powell opened a week of OSCE peace talks, and in January 2005, the Clintons spent a weekend here.

Located on a quiet street, away from the flurry of activity on Duval Street, The Little White House is easy to  miss. Karen and I were glad to have stumbled upon it.