Martinique is home to seven rum distilleries, one of which was within walking distance of our anchorage in St. Pierre. A day of rum was definitely appealing to Scott, so we set off to visit the Depaz Distillery.

We climbed out of town, past more “volcano” ruins, and onto a rural road that led to the distillery. Our path was lined with sugar cane fields. 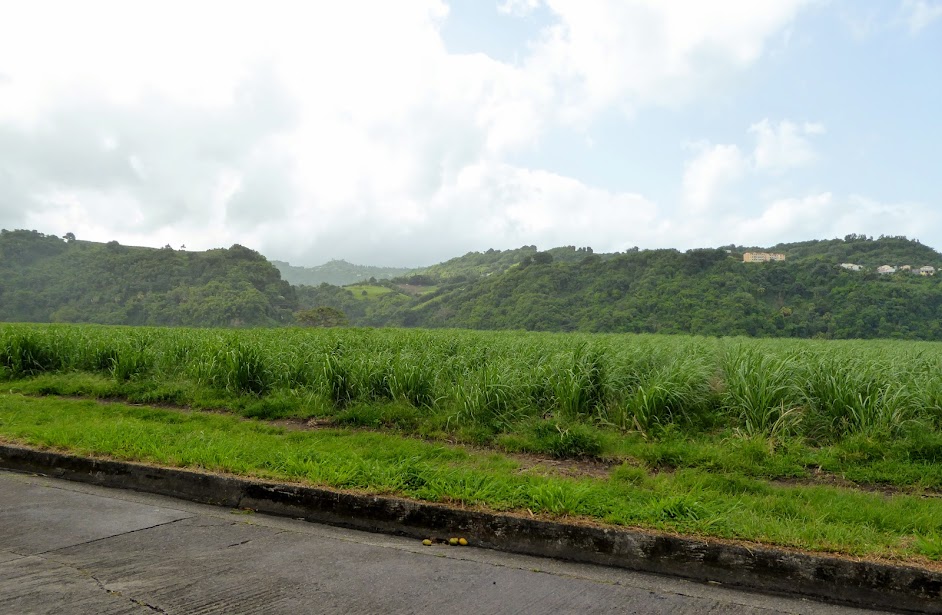 Dodging rain along the way, we eventually spotted the distillery ahead, with it’s grand manor house. 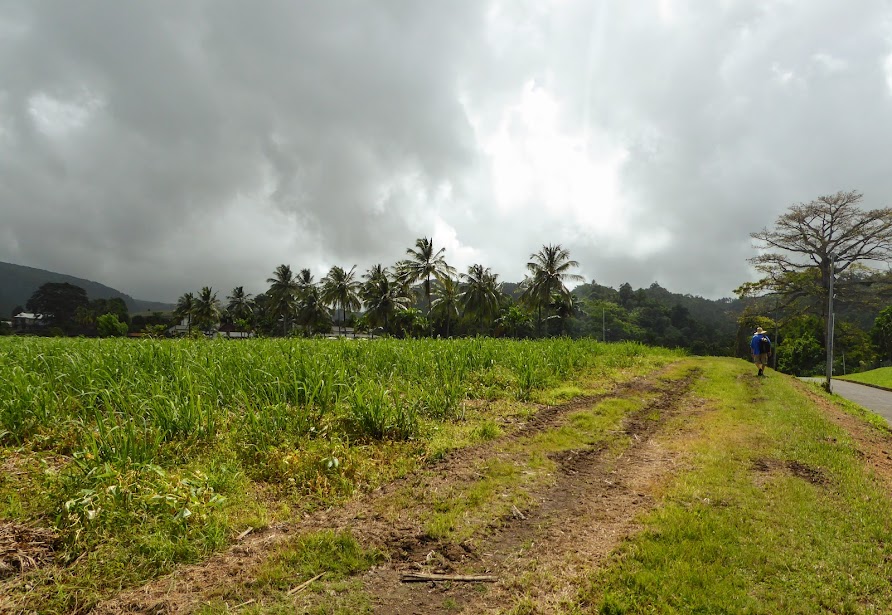 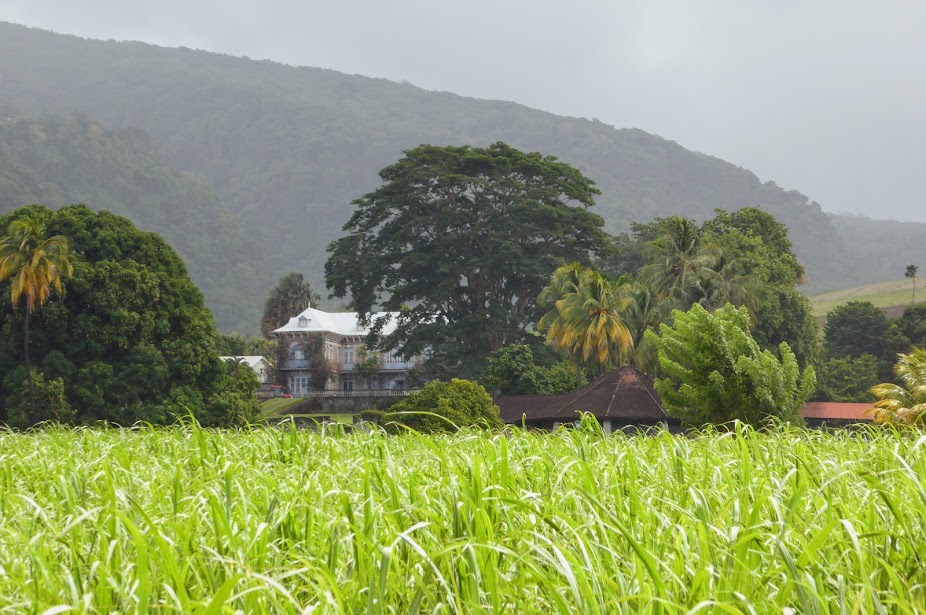 We walked up the lane, past the restaurant with Mt. Pele in the distance and began to explore the grounds. 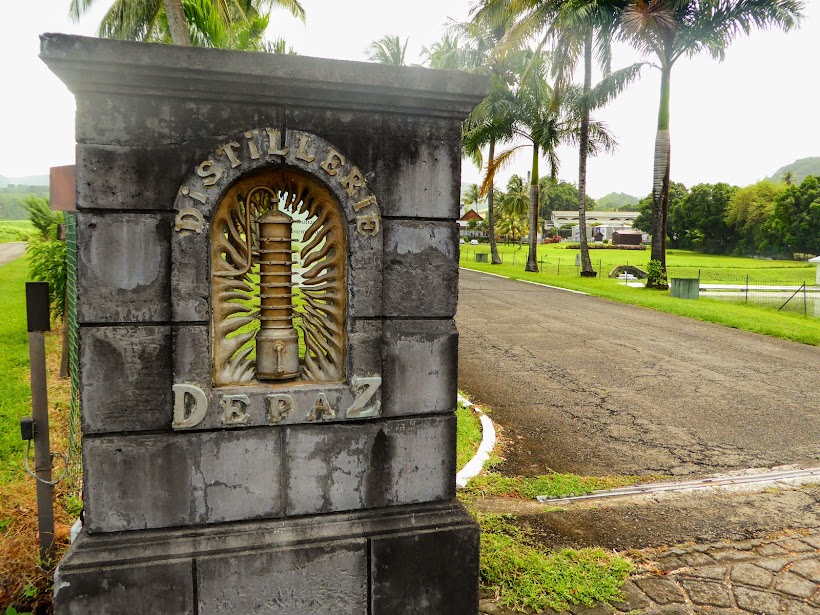 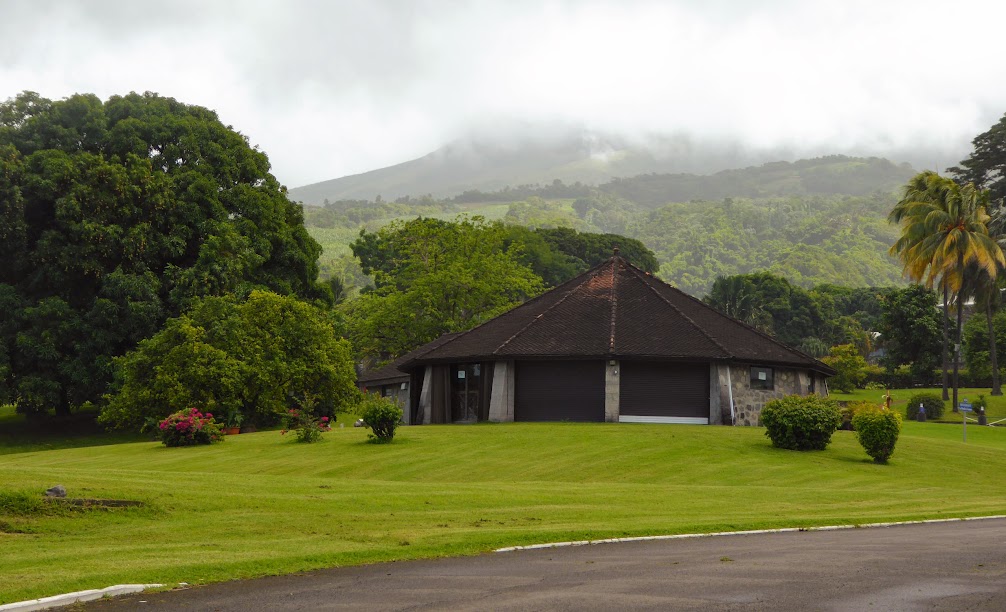 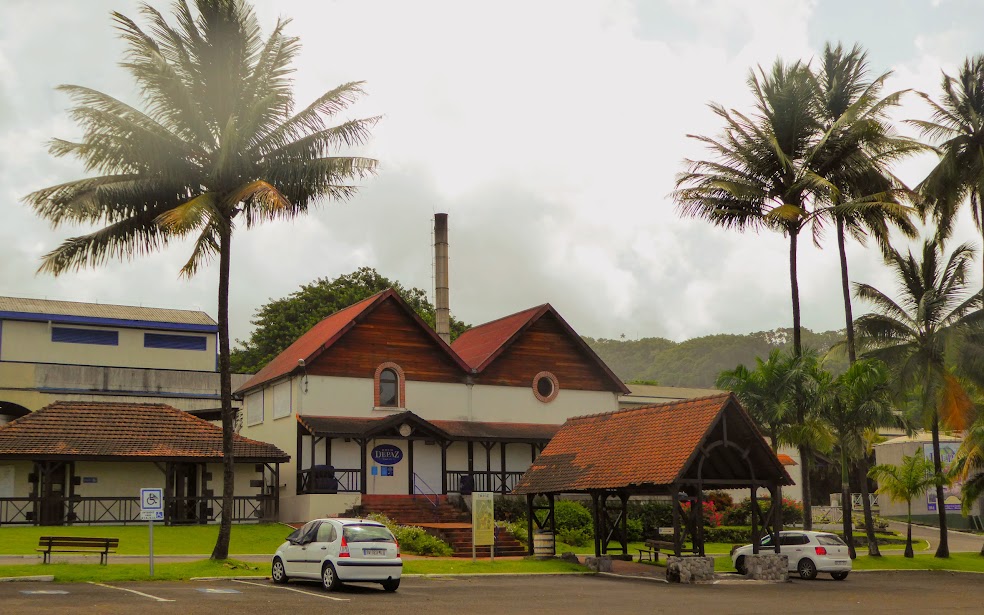 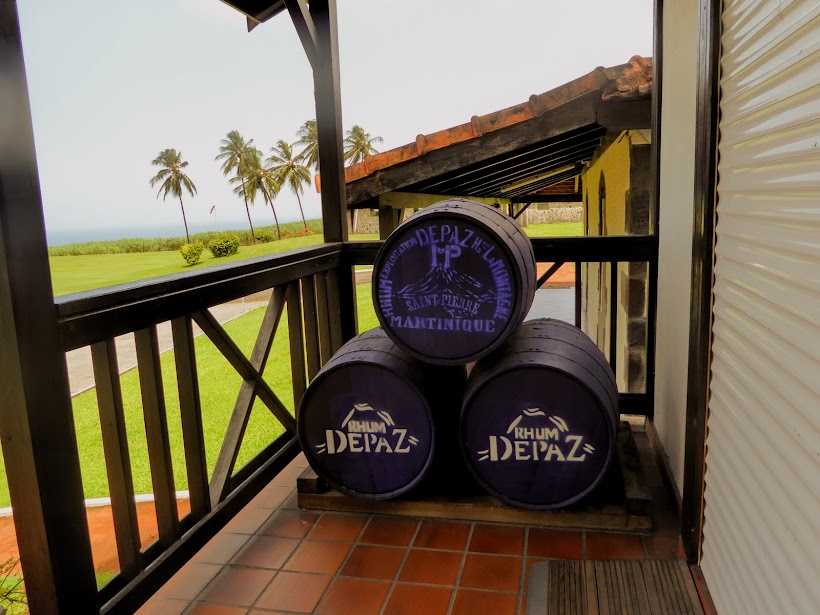 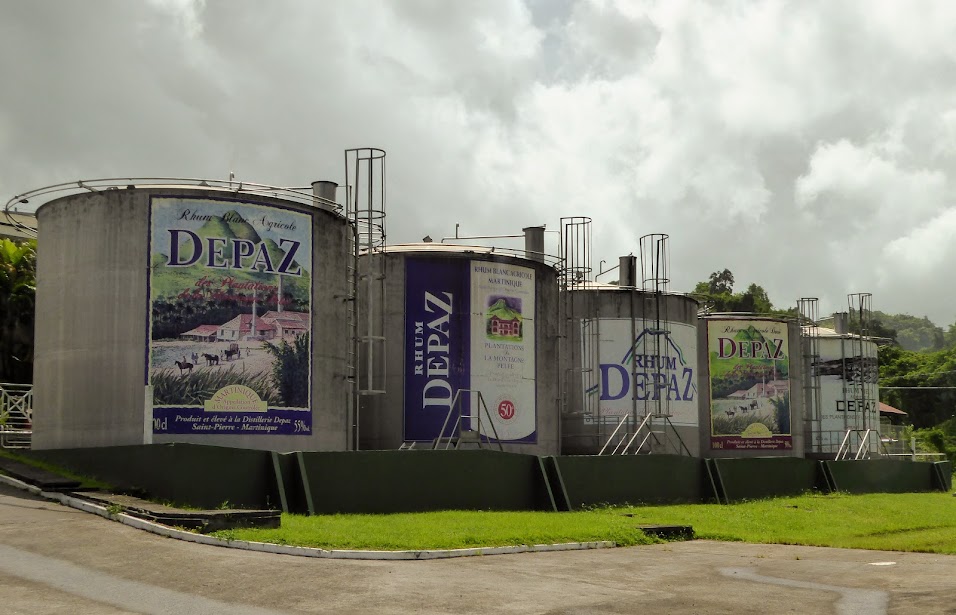 Several out-buildings described how the rum is made, and a small museum in the visitor’s center depicted Martinique’s history of rum, and that of the Depaz Distillery. 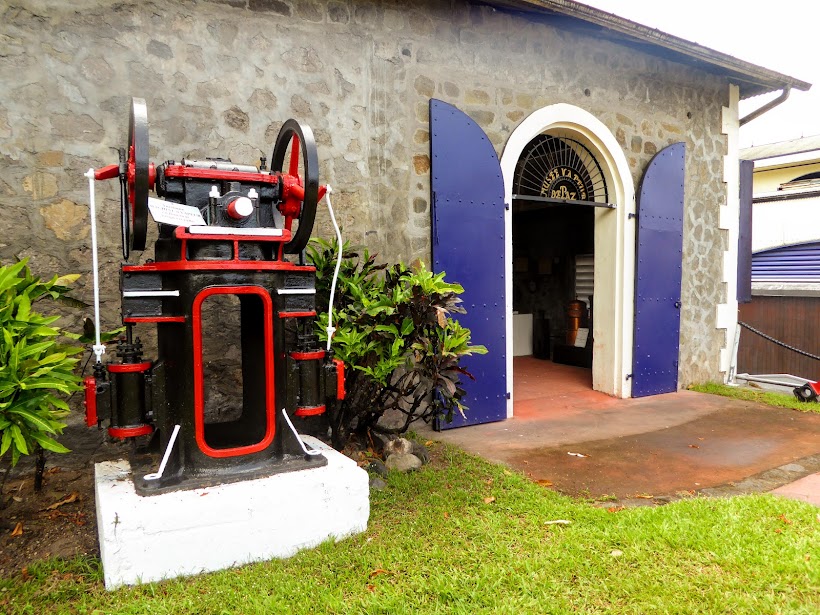 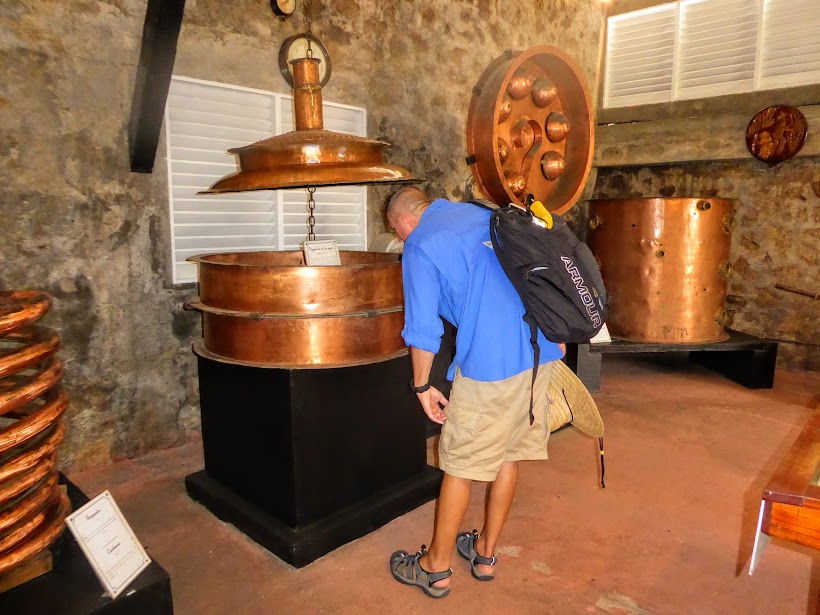 Here is what we learned:

Rum’s origins can be traced to the Caribbean, where over time, each island developed its own approach to making rum, but Martinique’s is very different from the others.

Almost all of the world’s rum is produced by fermenting and distilling molasses, a byproduct of the sugar industry, and is referred to as “rhum industrial.” When sugar cane’s power plummeted in the mid-19th century, distillers in Martinique and its neighboring French islands began a large-scale production of rum that originated directly from sugarcane, removing the sugar factory (the source of molasses) from the standard process.

The juice of fresh-cut sugarcane is taken directly from field to distillery, preventing spoilage. This “land to bottle” style is where the island’s signature spirit gets it’s name: “rhum agricole”, or agricultural rum. As a result, Martinique’s distilleries were booming by the early 1900’s. The number of operating distilleries has shrunk dramatically, from around 75 in 1935, to just seven today, but rhum agricole has held on.

Martinique is the only geographic area in the rum industry that has earned an AOC,  which translates to controlled designation of origin, which is a big deal. AOC specifies that a particular food or drink (such as the yummy blue cheese from Roquefort or the sparkling wine from Champagne), is a regional specialty, and notable enough to merit it’s own “identity.”

The AOC requires the cultivators of the sugar cane, and the producers of rum, to adhere to various regulations. Neighboring French islands of Guadeloupe and Marie-Galante make near-identical styles of rum, but only Martinique has earned this AOC mark from the French government, which was awarded to them in 1996.

Above the city of Saint Pierre, among the hills that gradually rise to Mount Pele, is the Depaz distillery, a grand sugarcane plantation manor. The original distillery and manor house were destroyed by Mount Pele’s eruption. The sole family survivor, Victor Depaz had been studying in Bordeaux, France at the time of the eruption. He returned to Martinique 15 years later, and began to rebuild his family’s extensive estate and distillery. His return was an emotional one, as the city of Saint-Pierre had been described by some who knew the family as the “cradle of Victor’s childhood, and the tomb of his family.”

Working tirelessly, Victor Depaz focused his efforts on replanting the surrounding land, specifically rebuilding the agricultural distillery on the hundreds of acres he called home. 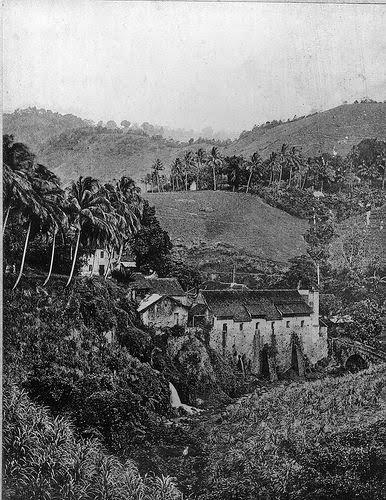 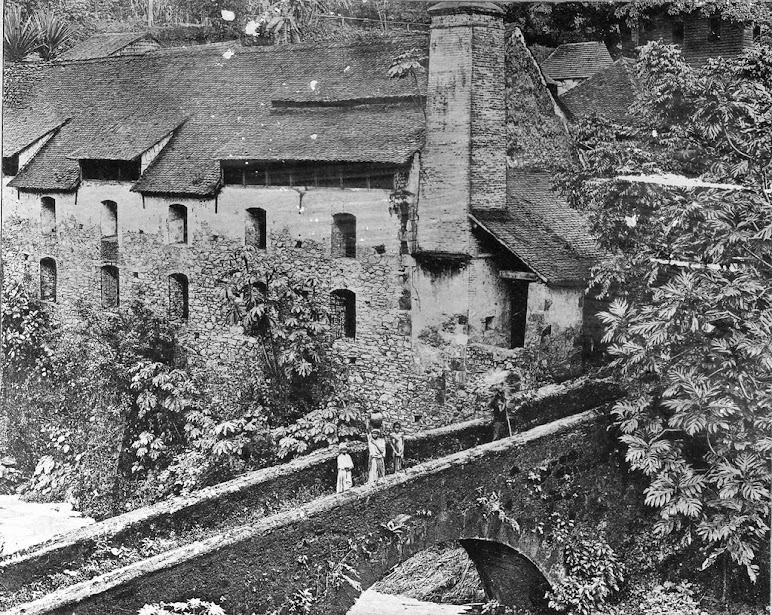 As luck would have it, the volcanic eruption left extremely fertile topsoil, in which Victor planted rare “blue” sugar cane (blue cane is the only type that requires true volcanic soil to flourish). This signature estate-produced blue cane is considered the most costly and difficult to grow, and delivers the ideal balance of sugars for Depaz rum’s maximum flavor and character. Today, it’s his signature blue cane that produces the agricole rhum called Depaz, and it’s production represents only 3% of the world’s rum. 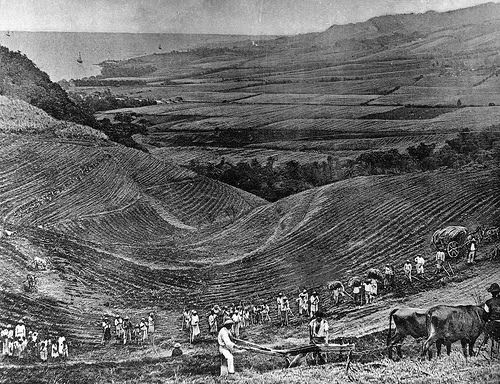 Eventually, Victor’s hard work paid off, and he successfully rebuilt the Depaz Estate to the brilliance it had historically known.

Nothing is, or can be added to an AOC designated rhum agricole, such as coloring or flavors. To further intensify the blue cane’s natural flavors, only oak barrel aging is permitted. 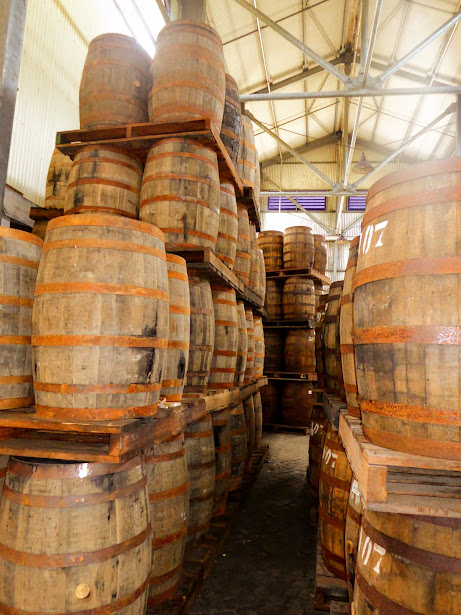 The rhum is aged in special small, charred oak casks, for at least three years, which we were told infused  “attractive” barrel wood, and mountain air aromas into the finished product. Aged rum from Martinique is among the most highly regarded in the world. 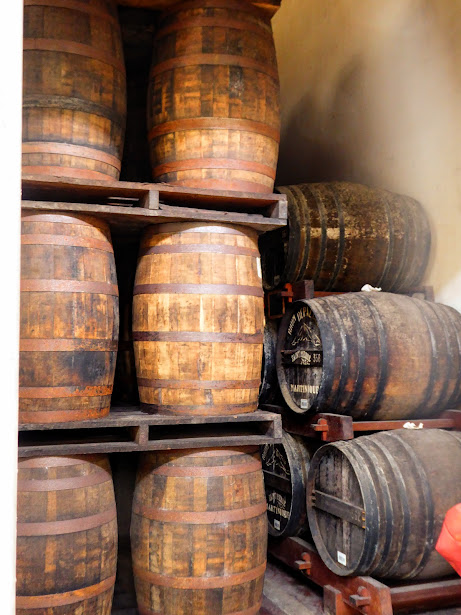 With our lesson over, we wandered on, past a huge water wheel and up to the sprawling manor house. Sitting high atop a hill, the views back down toward the Caribbean were amazing. 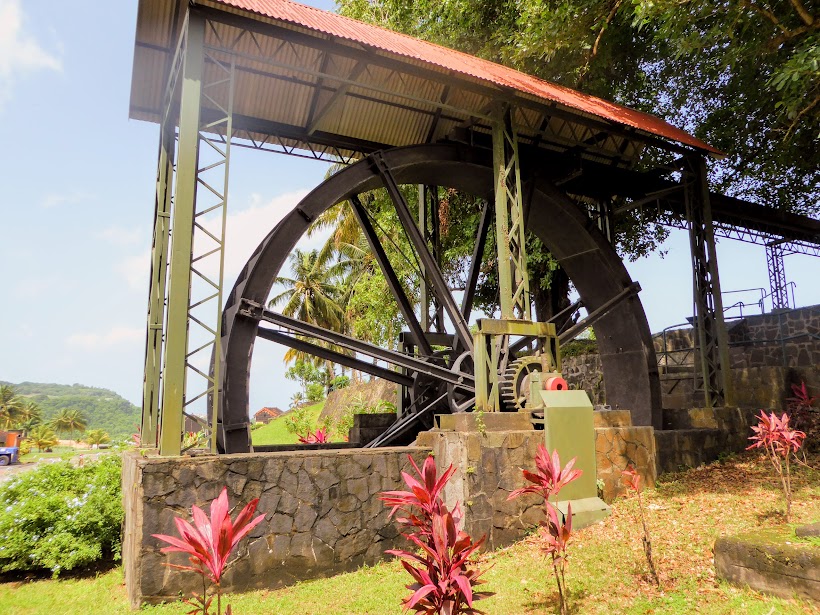 Once inside, Scott admired the large study, with it’s antique furniture and “mature” smells. He took note of the details, planning a similar room in his future. 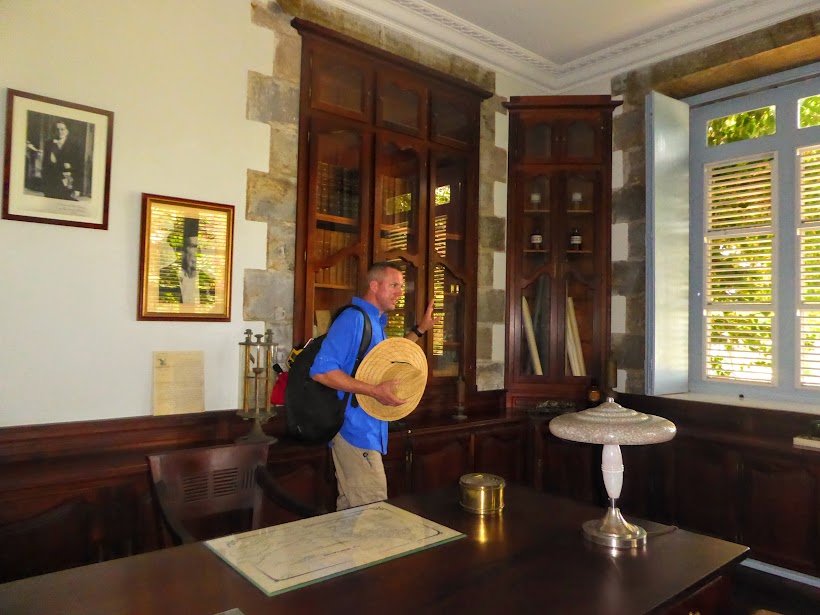 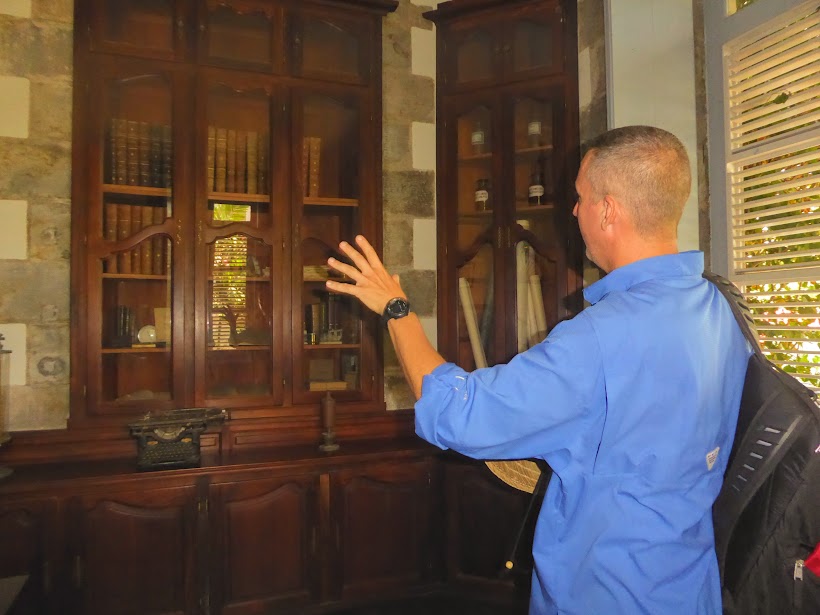 Outside, the rear of the manor house was just as grand, and the surrounding landscape just as beautiful.

Of course, no day of rum would be complete without  a tasting, so after roaming the grounds and manor house, we headed for the tasting area of the visitor’s center.

Depaz rum comes in bottles of all sizes and styles. I found this colorful photo online: 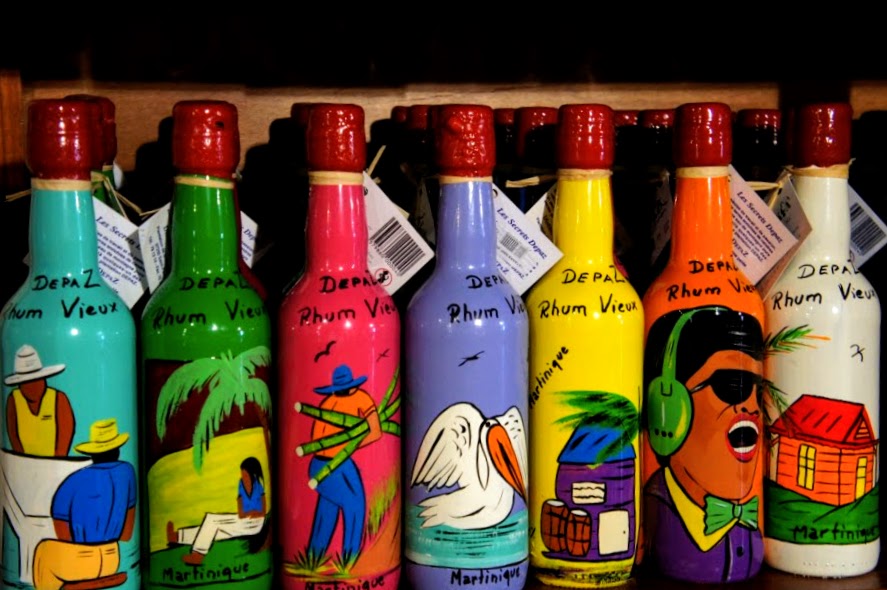 We tried several of the rums offered (well, Scott did), and learned about  Ti’ Punch, the national cocktail of Martinique. It’s extremely popular in the French islands of the West Indies, including Guadeloupe and Haiti. The name is taken from the Creole, Petit Punch, and has been abbreviated over the years down to Ti’ Punch. The cocktail is created by adding a large amount rhum agricole (ick), with a touch of fresh lime juice and a splash of cane syrup. “Purists” agree that a real ti’ Punch should be served without ice..bleh. This cocktail was much too “flavorful,” shall we say, for me. (Another online photo) 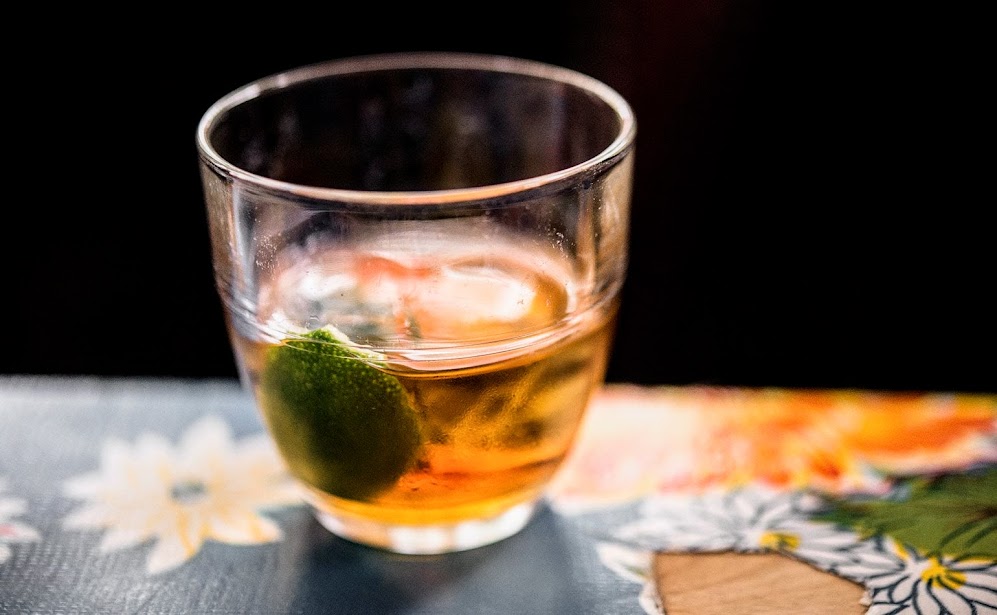 Making ti Punch calls for a unique type of swizzle stick, made from and named after a perennial tree called the bois lele, which is native to the region. Its branches have a unique end, that spreads out into five separate, small sections (More online help).

The “lele” is used to dissolve all of the cocktail’s ingredients. A bartender uses two hands on the stick, rolling it between his palms, similar to starting a fire, when mixing.

Ti’ Punch is usually served before meals as an aperitif, due its high alcoholic content. There is a tradition known as “chacun prepare sa propre mort” which roughly translates to, “each prepares his own death.” The bartender or the host will lay out the ti punch ingredients, and drinkers will prepare the cocktail to their own taste.

Having had our fill of all things rum for the day, we walked back to town, making our way back to the dinghy along the waterfront promenade, admiring it’s quirky shops and homes, while Sea Life waited quietly for us in the distance. 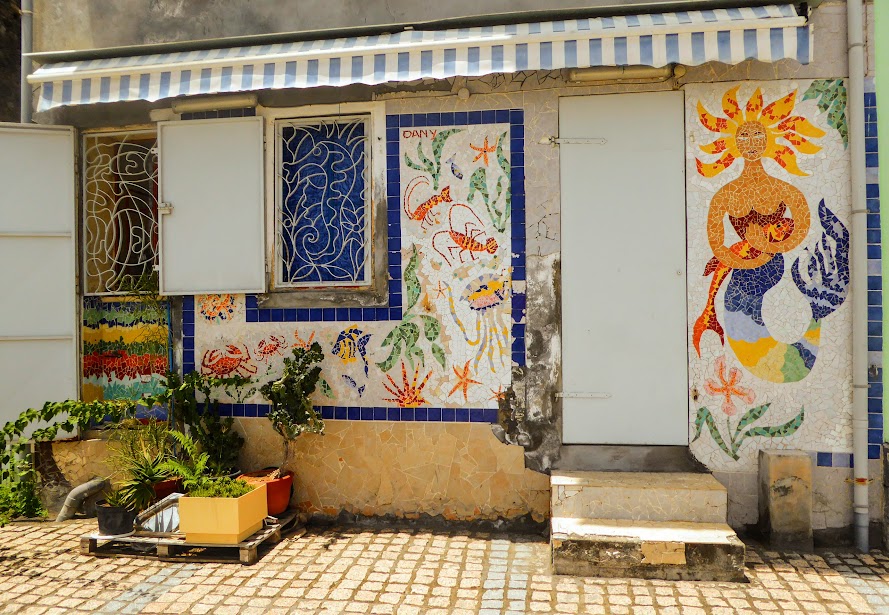 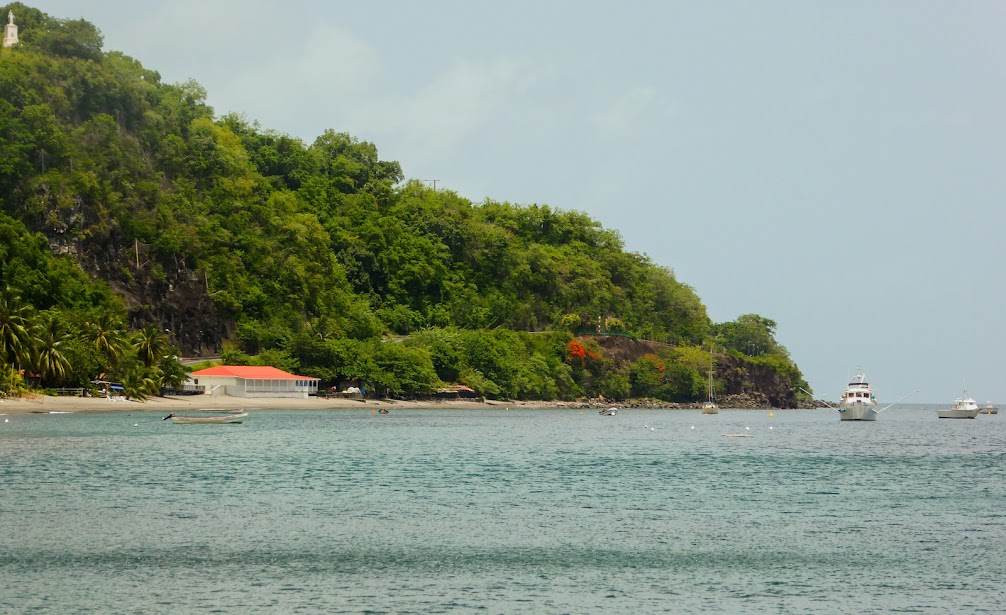