We made our way back to Guanaja, to pick up our refrigerator parts that have been delivered to Graham’s Place, and spend more time on the island. After a short visit, we’ll return to Fantasy Island Marina, where Scott can fix the refrigerator and cool it back down while we’re plugged into shore power. We paid for a month’s slip rental Steve, the dockmaster, was nice enough to let us split our time, leavnig for Guanaja, and coming back to our slip when we returned.

With head seas forecasted, I was not looking forward to the six hour trip. We only had a three hour ride from West End around to French Harbour, but the head seas made it a nasty go; a repeat made me cringe. Thankfully, the winds were much calmer this time, and aside from having to cool Howard down we had a good run back to beautiful Guanaja.

The forecast calls for strong winds this week (surprise), so we tucked back into El Bight. It offers more protection for us, than if we anchor off of Graham’s Cay. We were surrounded by the familiar sights of Manati bar and Han’s place.

Monday morning brought pouring rain (not called for), a beautiful rainbow and then more stormy clouds. It was neat to watch them settle down onto the mountains around us.

By mid morning, there was a break in the weather, so we jumped into the Aluminum Princess and headed for Graham’s Cay to pick up our parts and grab some lunch. It was just a quick 20 minute ride, and the sun came out to greet us as we arrived at Graham’s Place.

However, not two hours later, as we were finishing our yummy fish sandwiches (mine blackened and Scott’s fried), I noticed the sky darkening again. We paid our bill, jumped back into the boat with our boxes and set off for El Bight. Within minutes, the seas went from calm and clear blue to threatening grey. We made our way through an angry chop back to the boat, amidst building white caps. As usual at times like this, we were glad to be tucked into the Aluminum Princess.

Once aboard Sea Life, we unpacked our boxes in the cockpit. Corrugated cardboard is a favorite place for cockroaches to lay their eggs, so we bagged it up (unbeknownst to Howard, as he can’t resist a box) and set it out into the Aluminum Princess. Our parts now wait in the saloon, until they are installed.

The process was costly (2,000.00 in total: cost of parts, shipping to Miami, shipping to mainland Honduras, customs fees, and shipping to Guanaja..plus a tip for Alex, the manager at Graham’s, who was such a great help to us), but took just under two weeks. All in all, we can’t complain, especially since Defender was great enough to refund Scott the cost of his first order to Mexico (minus the shipping). It seems that they are having such a problem with Mexican Fed Ex customs that the parts will just be written off as a loss. Their customer service is fantastic!

In the meantime, our windlass had decided to give us attitude as we came in to anchor from Roatan, so Scott spent a day taking it apart and repairing it. Thankfully, no part ordering necessary! He promises to do a short Captain’s Corner post on the repair soon. Once the windlass was back together, he fixed a problem with the valving in our shower fixture in the guest head. Because why be bored?

The heat and humidity are in full force (86 degress, with 70% humidity by 8:30am), so we do our best to move as little as possible. Howard doesn’t quite understand the heat. He’ll get a wild hair and have a crazy session in his latest play area, an Ace Hardware bag. The thing has been torn almost to bits.

Exhausted and hot, Howard will splay out for a nap in his Africa basket taco. If his breathing gets consistently fast,  we’ve started placing a cold, wet towel on him. It seems to work well at cooling him down (with great success on our trip here from Roatan). I’m shocked though, at how much he’s starting to tolerate it.

Once cooled down, it’s into a good, deep sleep.

Last night we visited Hans’ place, catching up with the regulars and enjoying some pizza. We’ll stay in Guanaja for a week or so, before returning to Roatan. Here are some photos of our trip back, and the last few days.

Graham’s Cay sits just off of mainland Guanaja. The small private cay is owned by Graham Thompson, who purchased the property shortly after Hurricane Mitch devastated the island in 1998.

On a quick side note, Mitch stayed over the island for three days, with sustained winds of 100 mph. The high waves eroded northern coastlines and damaged lagoons. It also destroyed nearly all of the plants and trees on Guanaja, also uprooting or knocking down almost the entire mangrove forest. I’ve also read that Mitch produced waves of 44 feet in height! Here’s a photo that I took when we first arrived.

And here’s one taken after Mitch came through. Amazing. 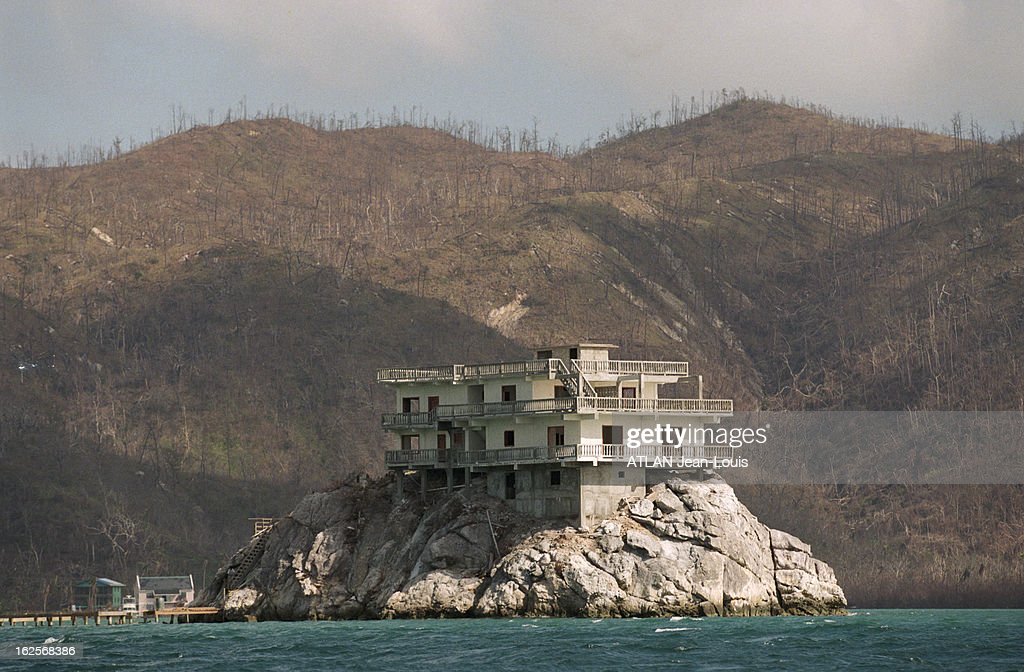 Ok, back to Graham. Originally from the Cayman Islands, Graham developed the cay into  Graham’s Place resort. The original hotel was made into five private rooms, and then four villas and a 16 room hotel were added.

The property is immaculately kept, with many areas for seeking both sun and shade, and the entire island is filled with colorful buildings, tables, chairs and plants.

The views from Graham’s property are beautiful, with clear shallow water leading into a mosaic of green, before meeting the darker blue of deeper depths.

Graham has also enclosed an area among his decks, and made it into and aquarium. There are a conch, some huge groupers, a variety of fish, and many turtles. Looking down on the fish didn’t provide the best photo opportunities, so I focused on the turtles. They are sizeable, and some of the large shells are really beautiful. There is also an area where the turtles can nest and lay eggs. Once hatched, the small turtles are released into the wild.

With low season approaching for tourist travel, we have had the place to ourselves each time we visit. We’ve enjoyed good food, refreshing caipirinhas and exclusive attention from the very friendly staff. The cay provides a large area to walk and stretch your legs, and many places to sit, lounge or swing.

The staff here at Graham’s Place was incredibly helpful in getting our refrigerator parts delivered. Alex, the manager here, promptly replied to our call for help and provided detailed information on how to proceed. He also paid the customs and delivery fees, allowing us to reimburse him when we picked up our parts.

Flying through Honduras is not dangerous, and Guanaja is completely safe. If you’re looking for a beautiful,remote and low-key island get away, consider Graham’s Place! Here are more photos, including many turtles.

With the forecast calling for winds below 20 knots, we planned to move out of El Bight and farther down the coast yesterday morning. However, on our trip into Bonacca for some food and an ATM run, the winds appeared to have picked up instead.

The Aluminum Princess slogged through white caps and sizeable waves in the open waters between our anchorage and town. With Scott wanting to tow her behind us when we moved, and concern for a comfortable stay at anchor, we decided to wait until this morning to change our location.

However, as I worked in the cockpit late yesterday afternoon, I noticed that the towels drying on the line weren’t whipping quite so violently (after getting slapped pretty good in the head by one earlier, I should know). Realizing that the winds had died down, I woke Scott from a nap, and we scurried to ready and go. It was only an hour ride to our next anchorage, but we liked the idea of waking up the next morning already settled.

We raised anchor and headed out of El Bight, around the corner and further down the coast of Guanaja. As always, the views did not disappoint along the way.

As planned, the Aluminum Princess tagged along behind for the ride. After a short and easy hour, we arrived at our next anchorage, off of Graham’s Cay.

We’d already planned to visit, having heard great things from fellow cruisers. Most hotels and resorts, and some islands in general, aren’t always welcoming to cruisers. Sometimes this is for good reason, but for the most part it’s frustrating and unnecessary. In addition to him being friendly toward cruisers, we now have another reason to like and meet Graham.

Unfortunately, we had no luck with Mexican Fed Ex, and getting the compressor for our refrigerator through customs. At whits end, Scott got Defender involved, the company we ordered the parts from. After more back and forth with no clear instructions or reasoning on the issue, Scott told Fed Ex Mexico to send the stuff back.

He then received an email asking for his credit card number, to pay for “fees and storage.” There was no cost given for said “fees and storage,” and Scott replied that he did not intend to pay. He was through with the matter, having done what little they’d asked of him, with no result or explanation as to why.

Defender has been just as frustrated with the issue. They have someone who deals just with Fed Ex, and with international shipping, and can’t get a resolution. Fed Ex Mexico wants Defender to pay 500.00 for return shipping. Defender has decided to just let the parts go, write it off and refund Scott his money (less original shipping). The company has been terrific to us the last few years, during our refit, and this is a true testament to their exceptional customer service, going above and beyond for Scott.

Ok, so we now turn to Honduras, and getting the stuff shipped there. I again reach out to our friend Louis, who is proving an invaluable resource. He suggested that I contact Graham Thompson, to ask how to proceed. A great idea; a local man, who could point me in the right direction.

It turns out that Graham didn’t point at all. He quickly replied to my email, giving me the information for a shipping company based in Miami, that he and his son use for things that they cannot get locally. Once our parts are in Miami, we can choose to have them shipped via boat or plane, with his name on the package. When they arrive in Guanaja, Graham will be notified. He will pick up the items, pay the fees and we can reimburse him…hoo-RAY!

However, this stupid saga continues. When Scott called Defender to re-order his parts, he feared the sale price originally offered had ended. It indeed had, but they honored the sale price for him…of course. However, the parts are now on back order until the end of the month! This was disappointing to hear, as we know that there are perfectly good parts sitting in Merida, Mexico!

We plan to go ashore and say a big hello and thank you to Graham, as well as get final details before the parts come in to Defender and the order goes through. Since it will take weeks for that to happen, and for the stuff to arrive here, we plan to stay here a few days and then head on to Roatan. We’ll stay there for a few weeks, and then return here to wait for our shipment. Neither location is a bad place to be stuck!

Here are a few photos from our short trip “down island.”