November in Bocas, and in all of Panama, means holidays, parties and a lots and lots of drumming. There are eight holidays in the month, all  marked with parades made up of school bands, with several adult groups walking throughout as well (haven’t been able to figure out who they are, or what they signify).

Practice for the parades begins weeks ahead, with drums echoing throughout town. School bands practice daily on the sides streets, marching down the middle of the road, with no closures or police. It’s like a flash mob parade, appearing out of nowhere, and cars have no choice but to take another road (ha, and they’re aren’t many others!).

The town is awash in Panamanian flags. They hang from buildings, cars, boats, ferries and zig-zag across the main street. Sea Life showed her Panamanian pride as well! 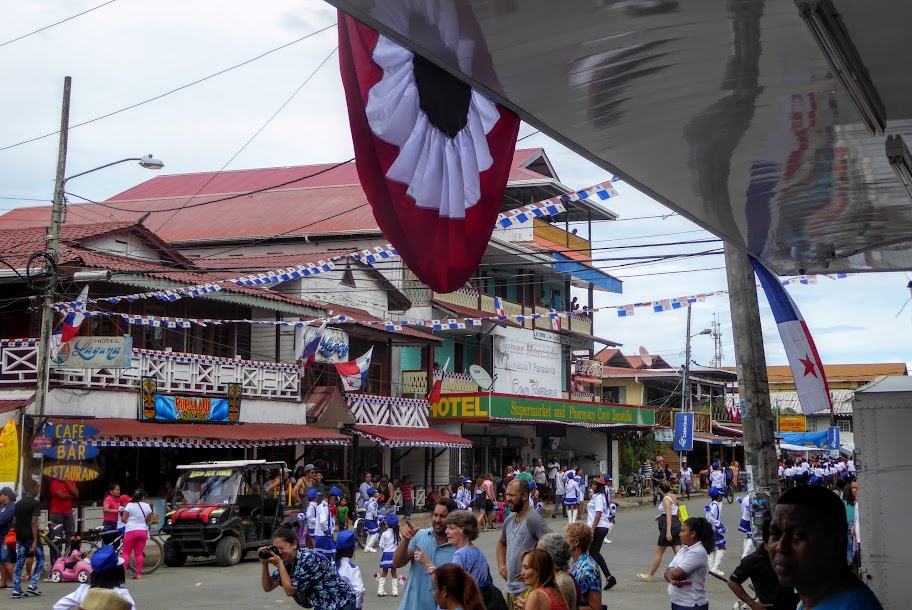 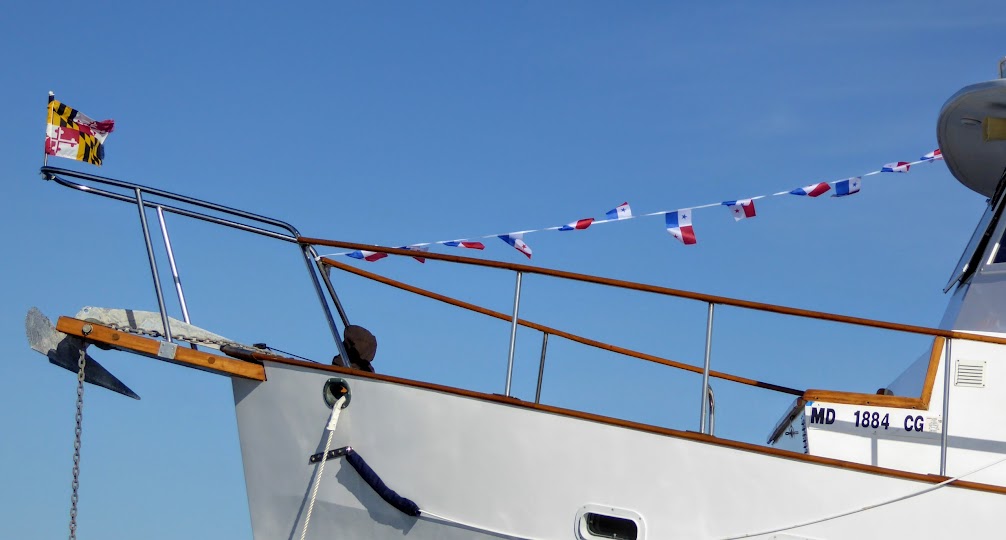 Many stores are open for business, despite the holidays. All of the Chinese-run grocery stores remain open, but the Chinese-run hardware stores choose to close. We assume that people working  jobs that require them to shop at the hardware stores are off on these holidays, but people always want to buy food! Most souvenir and gift-type shops along the main street are open, and as you’d expect, government businesses are closed on these days.

Since most all of the “regular folk” have the days off, local beaches on the holidays are mobbed; much like July 4th in the U.S. The public dock that leads to Red Frog beach was packed with pagas of all sizes. 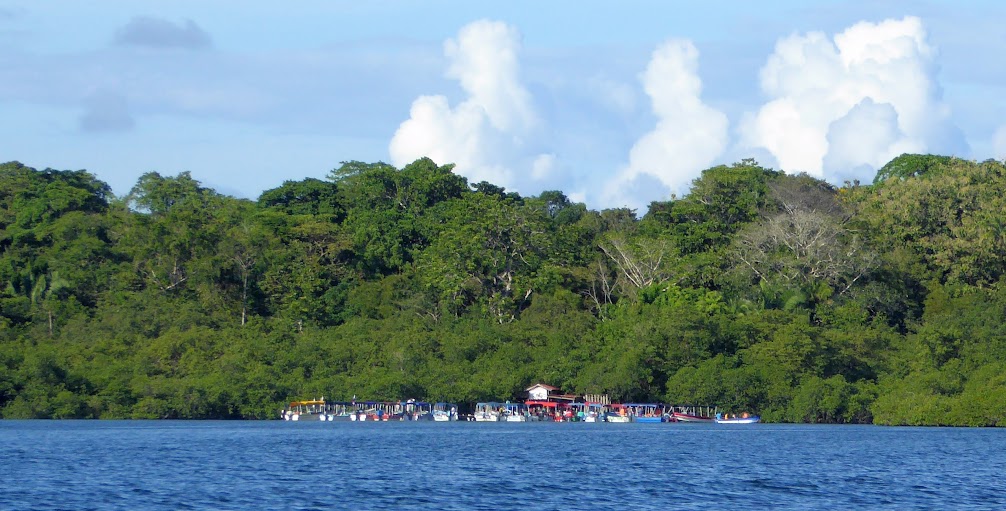 Here’s a brief rundown of November’s holidays, and what they signify:

November 2nd – Dia de los Difuntos (Day of the Dead): This isn’t a patriotic holiday, but it is a special day in Panama and all over Latin America. People pay respects to their loved ones who have passed away. Traditionally, they go to the cemetery, visit the graves of their friends and family, bring flowers and gifts and make any necessary repairs to their tombstones (like new paint).

Day of the Dead is a “dry” Panamanian holiday. Bars close at midnight on November 1st and stay closed until midnight the following evening. Sale of alcohol in the province of Bocas del Toro is prohibited on this day. Luckily, we did not come to town planning to stock up on alcohol, as we had no idea of the “dry” rule.

Novermber 4th – Dia de la Bandera (Flag Day): The flag of Panama was drafted in secrecy and presented the day after the separation from Colombia was proclaimed.

The red and blue rectangles represent the liberals and the conservatives, the two political parties of the time. The white stands for an agreement of peace between them. The blue star symbolizes purity and honesty, and the red star authority and law. Hanging it correctly has the blue star and red rectangle on top.

By the way, this is a pet peeve of mine. It makes me insane when I see the Maryland flag hanging upside down. If you’re going to fly it, do it right!

We were in town shopping on Flag Day, and had to weave in and out of spectators. and the parade itself, to get where we were going. When our shopping was done, we watch some of the parade while waiting for the panaga back to Red Frog. 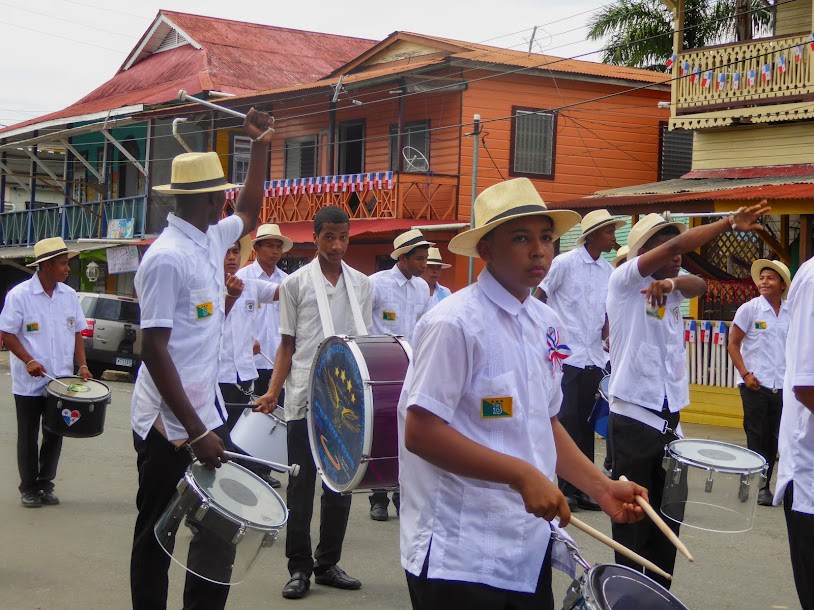 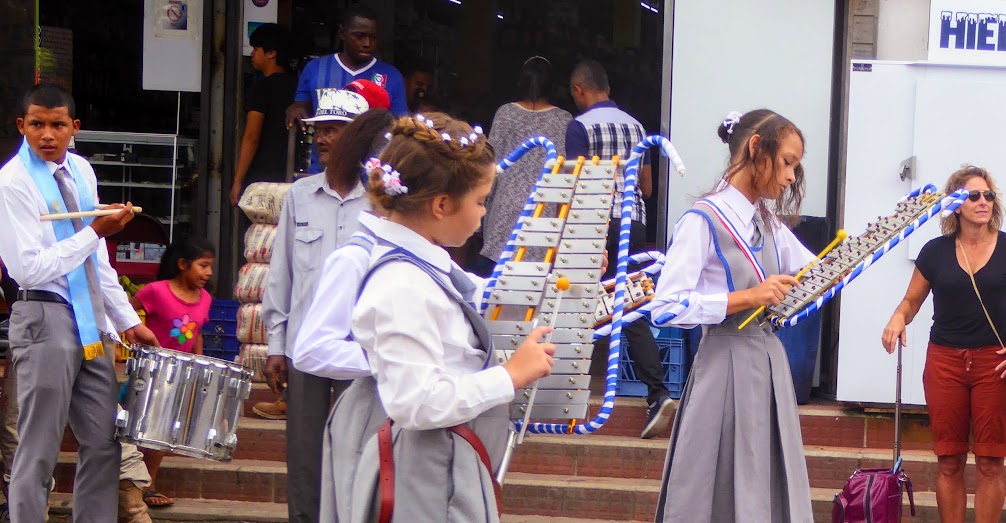 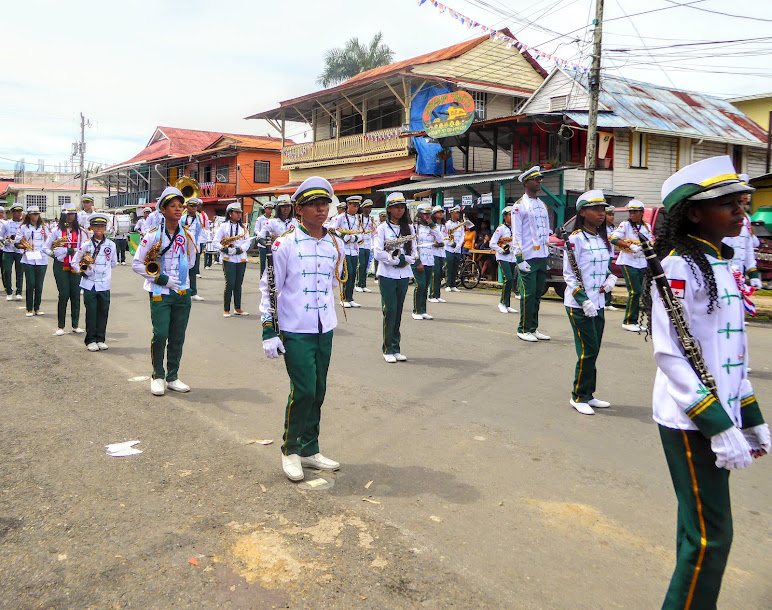 November 5th – Día de Colon (Colon Day): This holiday celebrates the day that the separation of Panama from Colombia was official.

November 10th – Primer Grito de Los Santos (First Cry of Los Santos): This date commemorates an uprising in the village of Los Santos in 1821, and is recognized as the first step toward independence from Spain.

November 16th  – Dia de la Fundacion de Bocas del Toro (Bocas Day): The province of Bocas del Toro was founded on November 16th, 1903, only 14 days after the creation of Panama as a sovereign state. This day also marks the culmination of all the drumming practice that is heard throughout the previous weeks.

Bocas Day features a big parade on Isla Colon with students coming from all over the province to participate. We’ve learned that these kids have good reason to be practicing so much; it’s a contest. There are three categories for prizes: niños (10 years old and younger), colegio (high school) and independiente (adults).

We were anchored off of town on Bocas Day, and I heard the drumming begin at 5:30am! A ferry arrives daily, from nearby Almirante, loaded with trucks full of groceries, goods, and supplies. It also acts as a passenger ferry, but we have seldom seen more than a few people aboard as it arrives.

Bocas Day was much different. The ferry came twice, each time loaded down with many more passengers than cargo. Band members also arrived by ferry, and we could here them celebrating on board, long before they passed us on the way to the dock. 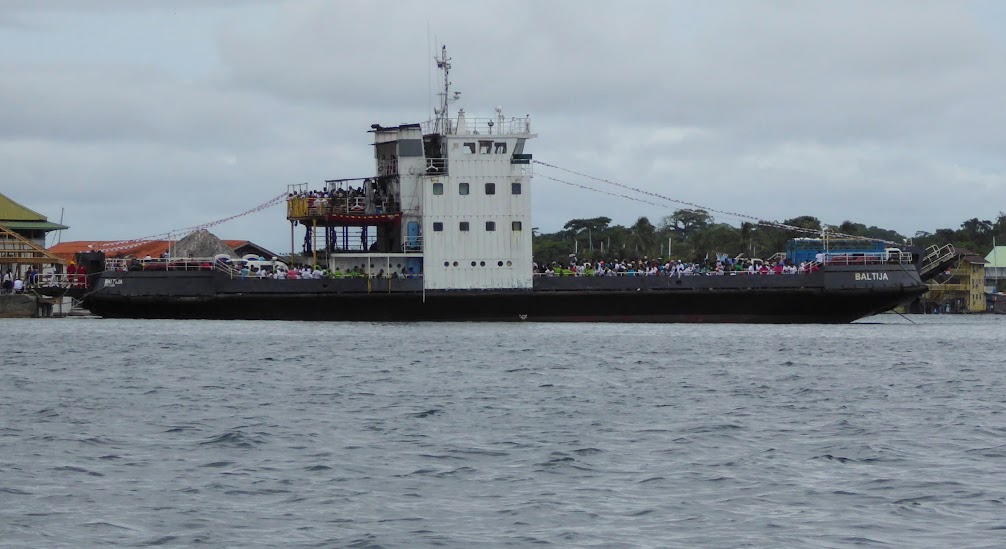 Scott and I went into town that afternoon, and watched the end of the parade. It went on for six hours, beginning at 10:30am, and ending around 4:30. During this time, there were several periods of heavy rain, but the parade participants were undeterred. Later that evening, it rained biblically,  for hours, and we still heard drumming late into the night.

Scott and I meandered through the crowds, watch a little of the parade and enjoyed some yummy street food. I had a noodle bowl, with tender, delicious chicken. Having eaten mystery meat at a previous event, Scott chose a skewer with the same chicken, because the meat was identifiable. 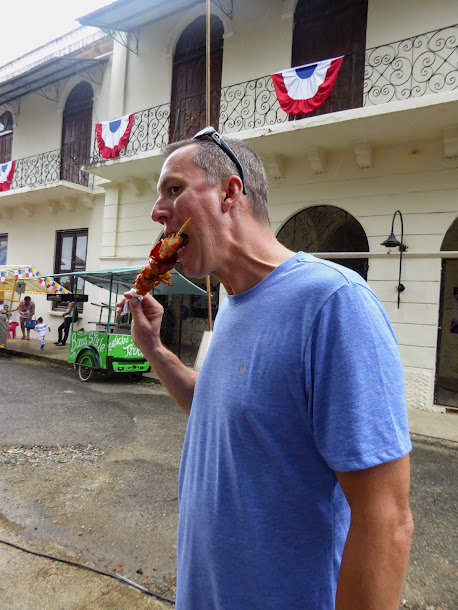 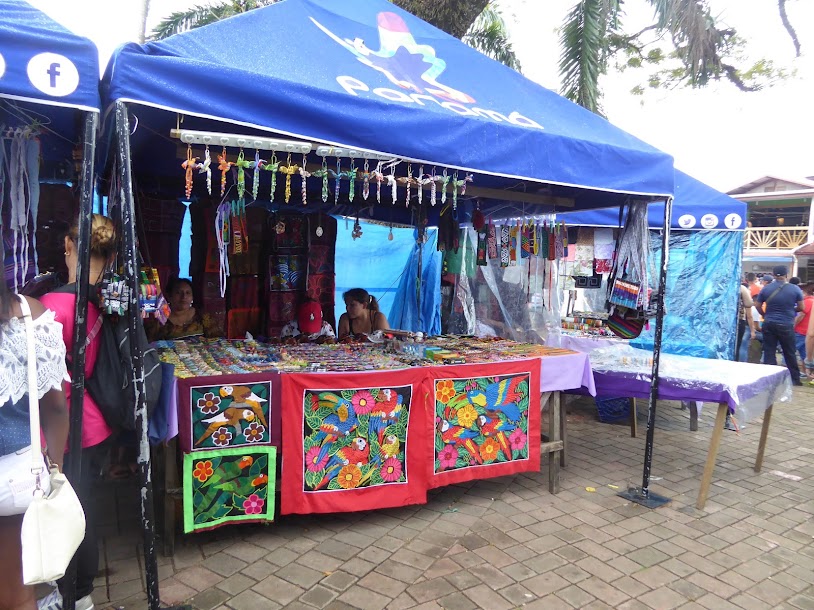 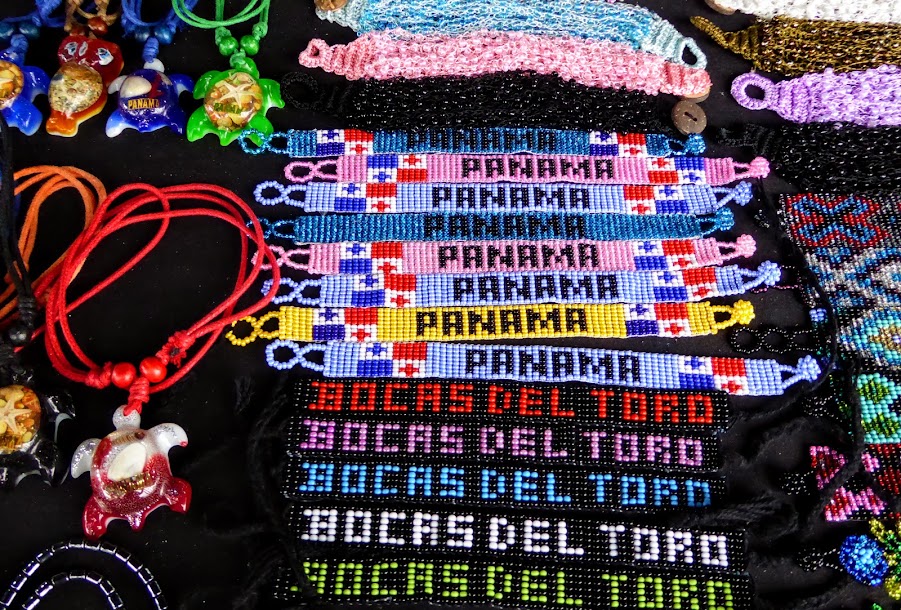 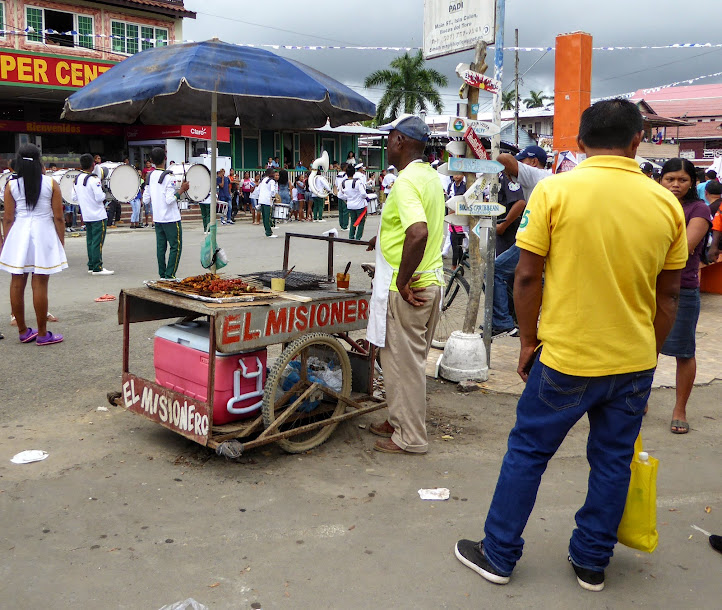 November 23rd – Dia de Bastimentos (Bastimentos Day): Bastimentos was founded in the same month (November) and year as Bocas del Toro, and this is another day full of parades and parties. “Basti” Day is located in Bastimentos Town, which is at the opposite end of Bastimentos Island from the Red Frog property. The little town is much more hilly, and must be a challenging go for those parade kids!

Many islands we’ve visited have celebrated holidays or carnival during our stay, and it’s been fun to experience the sights, and sounds in each location Here are more holiday photos.