As you may imagine, keeping stocked on groceries and supplies in the San Blas was challenging, to say the least. Although we were glad that Howard’s trip to the vet in Panama City resulted in no real issue, it gave me the chance to stock up on groceries and such. As long as the round trip by water and land was already in motion (to the tune of $200.00+ dollars) it was smart to fill the car and get my money’s worth!

With the trip to Panama City being logistically and time challenging, as well as costly, cruisers usually find other ways to get what they need.

There are several larger islands that have tiendas, or stores, on them. They offer a limited selection of canned items, rice, boxed milk and juice and produce that is more shelf-stable, such as onions, carrots, eggs (not refrigerated here) and potatoes.

Boats from Colombia arrive with supplies for these stores at various times each week, bringing with them, among other things, fresh produce. Scott is amazed that these old, wooden boats (that have seen much better days) make the journey to and from the San Blas, without breaking apart in the big waters off of Colombia. 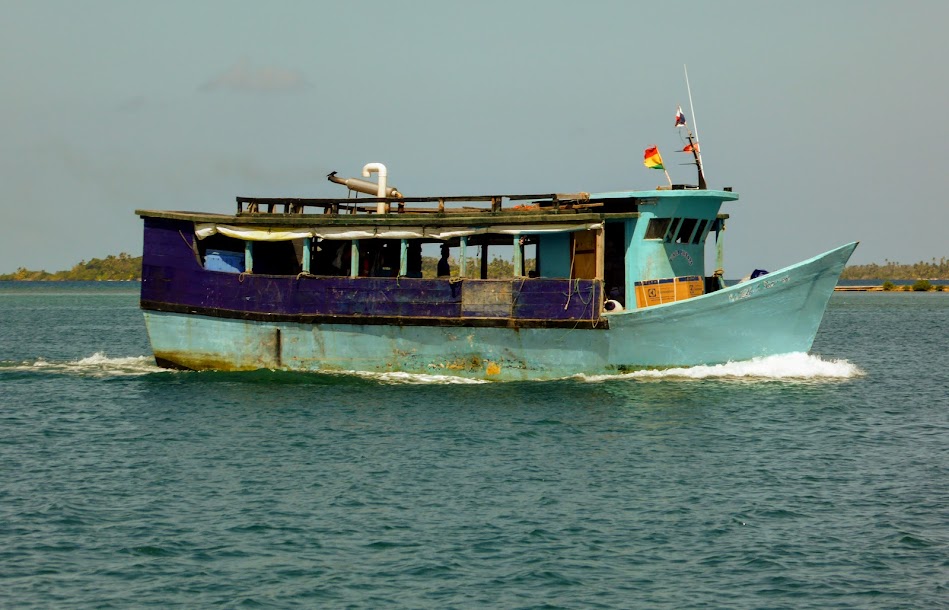 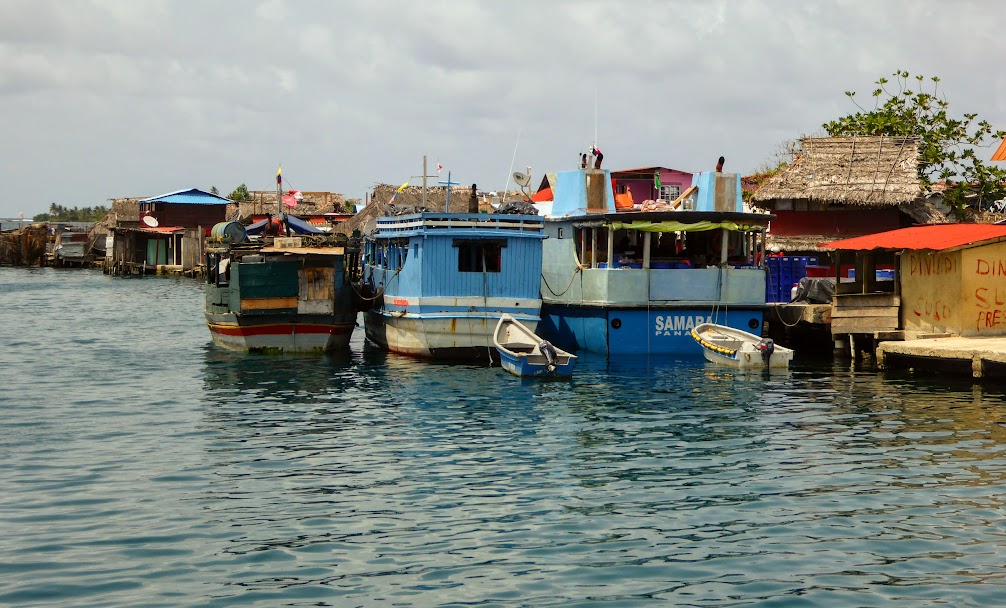 Unfortunately, the fresh stock is usually depleted within two days, so unless you happen to be very close by when the word gets out about a boat coming in, you’re out of luck.

Many out here use the chance to have things brought to them through other cruisers who may be traveling to Panama City, or through friends (or friends of friends) coming to visit. We have taken advantage of all three of these scenarios to restock on hard goods and groceries.

So….unless you are traveling near one of the larger villages when a shipment arrives, or have some form of Panama City connection coming to the area, the usual cruiser method for getting food (aside from fishing) is the veggie boat. 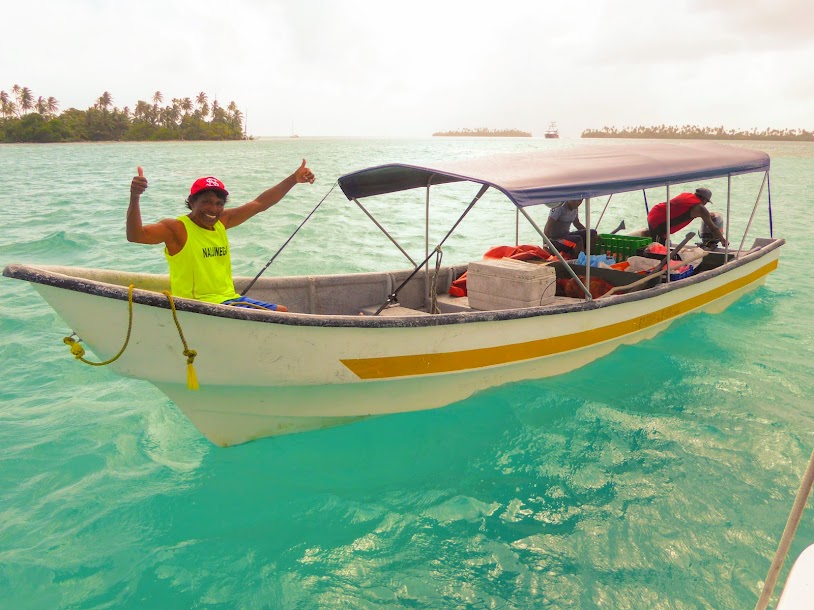 These pangas visit the many anchorages in the San Blas, bringing with them fresh veggies, fruit, beer, boxed wine, soda and sometimes meat and cheese. Their boats are filled with bags and crates of goods, and many also have “mobile” freezers, that may contain celery, parsley, chicken, cheese or butter. 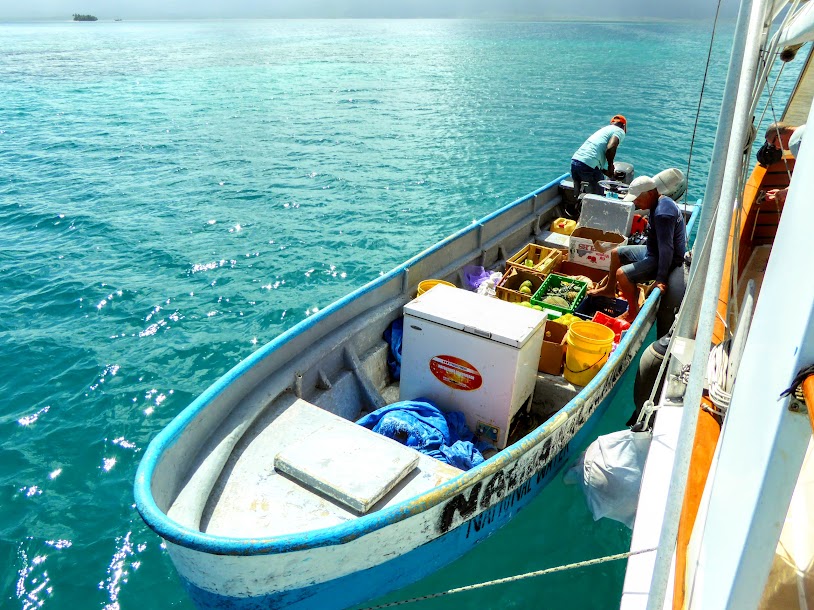 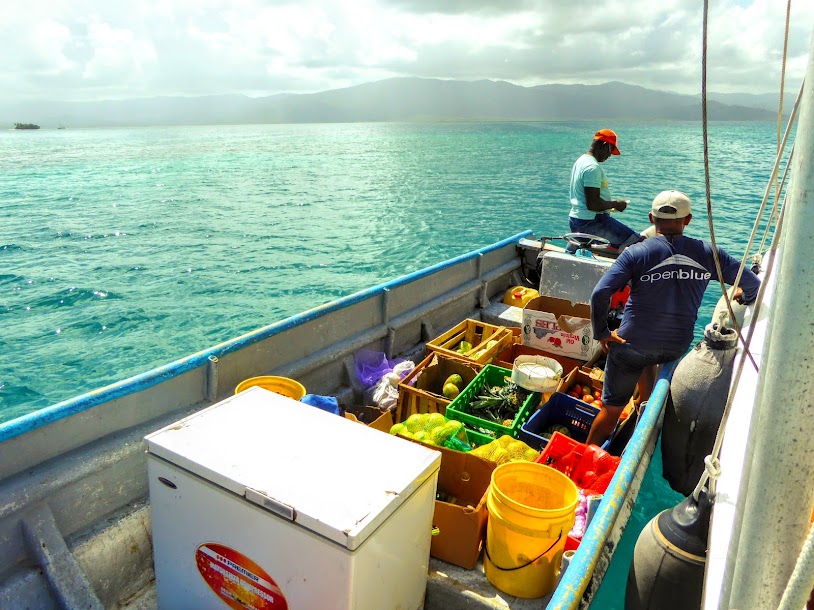 Some items are weighed by a hand-held scale, and others are sold by piece. We (especially Scott) have become familiar with most words needed to communicate what foods we need. For the rest, we just point. 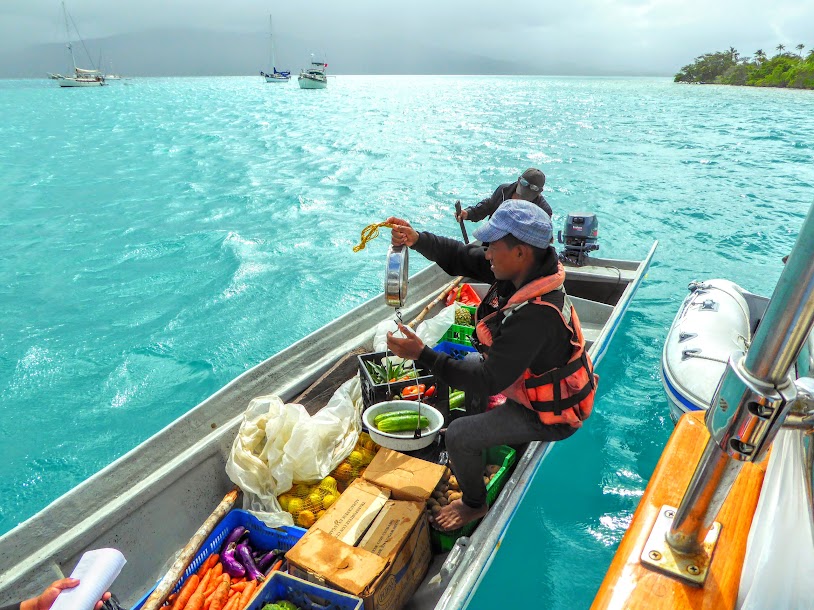 Word spreads of these traveling grocery stores’ arrival over the vhf radio. You may hear, “There’s a veggie boat in the anchorage!” or, “A veggie boat is just left Esnasdup, on it’s way to Green Island.” Some cruisers even have direct access to the boats by phone, and alert others as to when they will be coming to certain anchorages: “A veggie boat will be in the eastern Holandes early tomorrow morning, around 8am.” Knowing a boat is on the way gives you a heads up to stay put and be on alert, so as not to miss your chance at buying food!

In anchorages farther east, such the Holandes (swimming pool and hot tub), where we spent much time, the boats have to pass through stretches of open ocean, and come less frequently when strong winds are blowing. Between high winds and the holidays, we went almost three weeks without seeing one around Christmastime.

Now don’t get me wrong, we’re by no means in danger of starving here aboard Sea Life. We packed her to the gills with canned and dry goods before coming to the San Blas, along with plenty of soda and alcohol. However, you never shake the panic of not having convenient access to things, especially fresh food.

It has become more and more common for pangas to bring pre ordered groceries out to cruisers at anchor, especially to those who stay out for months at a time, or even year-round. Recently, these boats have even started to deliver diesel, gasoline and water…smart thinking!

The veggie boats usually stop first at cruisers who have placed an order, and then proceed to sell to the rest of the anchorage, usually starting at the front of the pack, working their way back. The excitement of spotting a veggie boat is quickly deflated by having it blow by you, and then watching and waiting for it to stop at all the other boats before coming to yours. Since we usually try to be toward the back of an anchorage, and away from any crowd of boats, we are typically one of the last ones “in line.” 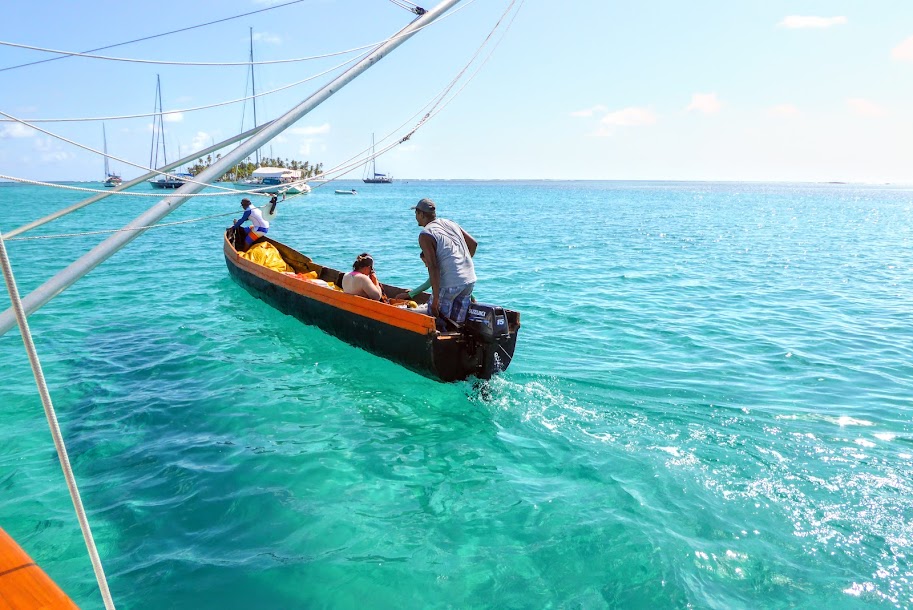 This whole process is incredibly stressful for Scott. Once the panga has been spotted, and identified that it is indeed a veggie boat, he keeps track of it’s progress through the anchorage, eyes peeled through binoculars, trying to see how much is being taken at each stop. I commonly hear, “@#%*@#!, so-and-so just hauled up two buckets full of stuff onto their boat! They just got here yesterday, and we’ve been here a week! We’re going to be last, and there won’t be anything left but some rotten @#%*!

These veggie boats must smell interesting to Howard, because once they’re tied alongside us, he jumps up on the rail, or cries to be held, to see what’s going on. Most of the men were taken aback at first, as Howard is much larger than any island cat (he is in no danger of starving either). We hear…“Grande!” or “Mucho Gato!” Several boats have learned his name, and call out “HOW-arrd!” as he appears. 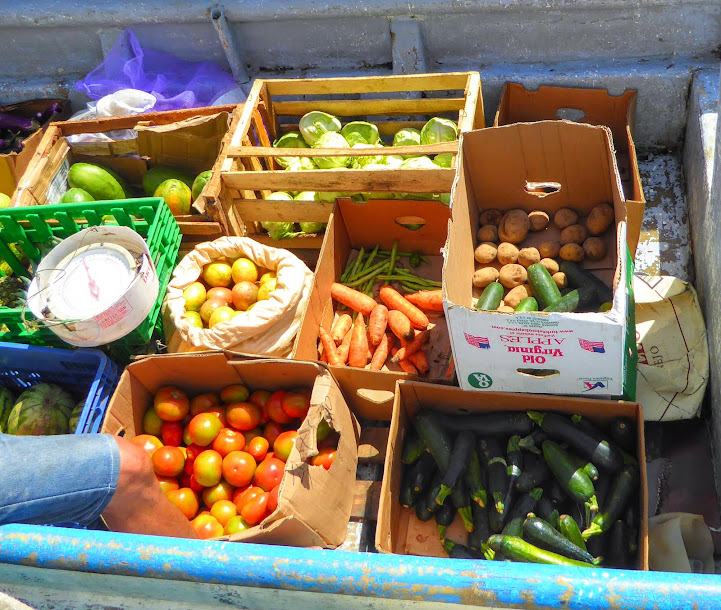 Unfortunately, as you may expect, the quality of these items isn’t always the best. Tomatoes are hard, and very often more green than red. No matter how hard you try, they will not ripen, and instead rot pretty quickly if not used. Carrots and cucumbers can be gigantic, and sometimes bitter as a result.

The outer leaves of cabbage and iceberg lettuce heads are usually peeled off when sold, to exposed the non-wilted, inner leaves. We were so desperate for lettuce after one “dry spell,” that we paid for these sad, little things….the tiniest heads of lettuce ever seen! 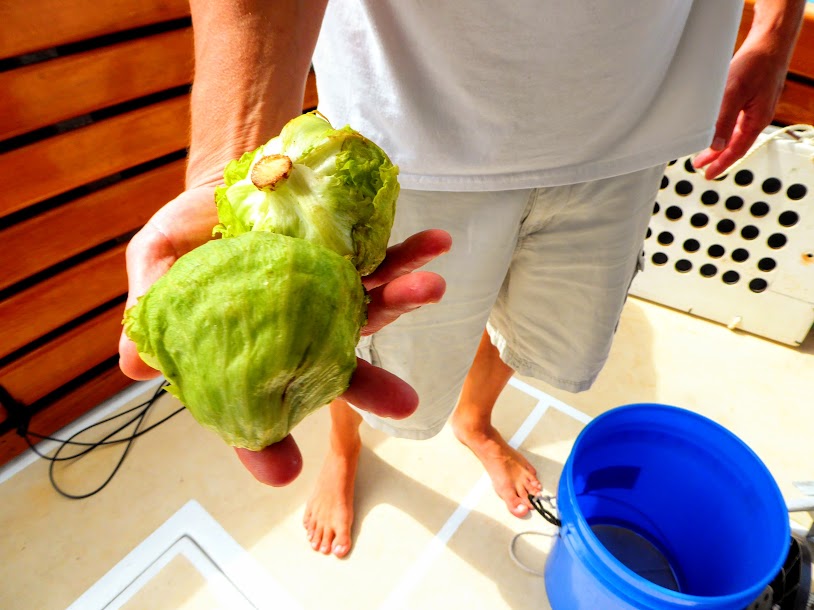 Fruit offerings usually consist of pineapple, papaya, apples, limes, oranges, grapefruit, bananas and mangoes (once, I got avocados). The pineapples have been decent, but not nearly as good as the candy-sweet ones we were getting in Bocas del Toro, and the poor apples that I’ve tried are just tart and tasteless. I’m not a papaya fan, and the mangoes are very stringy, making them hard to eat. The damned bananas stay green and hard forever, and then ripen and rot in just days. As a result, we have eaten many banana muffins!

I’ve mentioned before that we have discovered “limon mandarinas” during our travel in Panama. They are about the size of a mandarin orange, and usually beat up-looking on the outside. The inside is orange, but tart like a lime. However, they are a bit sweeter, and juicer than the tiny, key lime-like ones that are also offered, and we’ve come to like them much more. Here’s a quick photo I grabbed from the internet, as we are currently out of them.

We’ve gotten good celery and parsley from inside the “mobile” freezer, and there’s almost always “culantro.” It grows wild in the area, and smells and tastes exactly like cilantro. 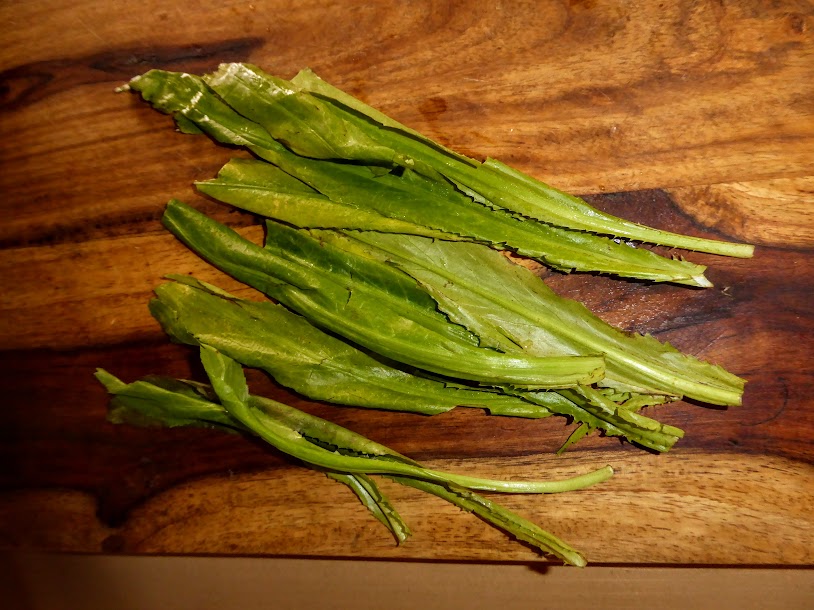 I once saw shredded cheese in the freezer, and have also heard of people getting butter from it as well.

On one occasion, we were told by a veggie boat that they had chicken (pollo) available. Scott indicated, by putting two fingers toward his eyes and then toward the freezer, that he wanted to “see” said pollo. Out came a whole, dead chicken, and I mean whole…no feathers, but head, beak, legs and feet intact. I was definitely not up for that remote island challenge, so we passed on the pollo.

Overall, there are many more food choices than I expected to get here in the San Blas, and for the most part, we’re satisfied with what we get, and enjoy it. Here’s the result of a good veggie boat visit for us. Notice Howard getting right to work on his favorite…the pineapple tops. 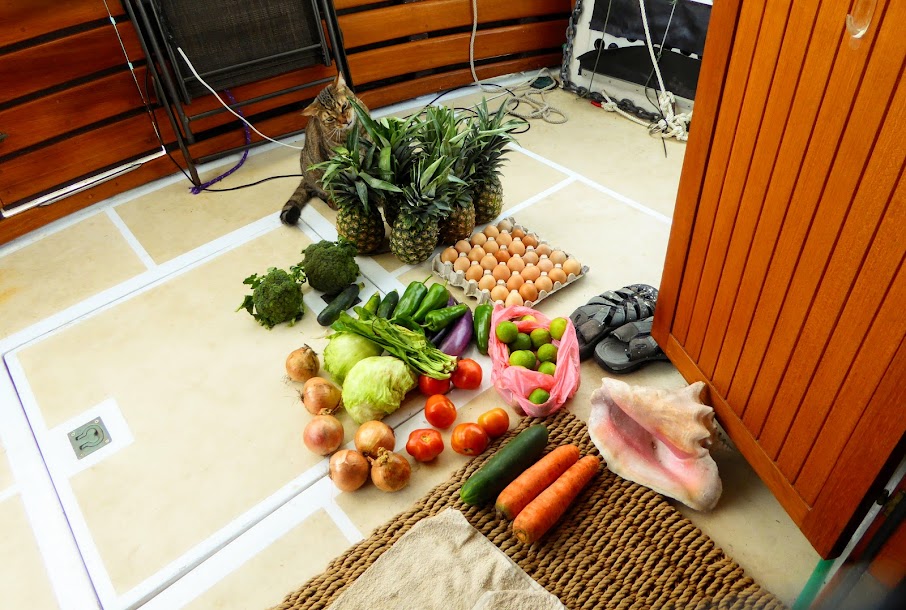 Thankfully, Scott’s prediction of empty bins with only some rotten @*#! left, only happened to us once. There was almost always a decent choice of food left the in the boat when it arrived, and we’d live to eat another day.

7 thoughts on “Groceries In The San Blas Islands”