The trip from Culebra to St. Thomas was a bit bumpy, but uneventful. We enjoyed the passing scenery, while heading for our anchorage in Brewer’s Bay: rocky islands, huge houses under construction, green hills and blue water. Howard felt it his duty to make sure we were on course. 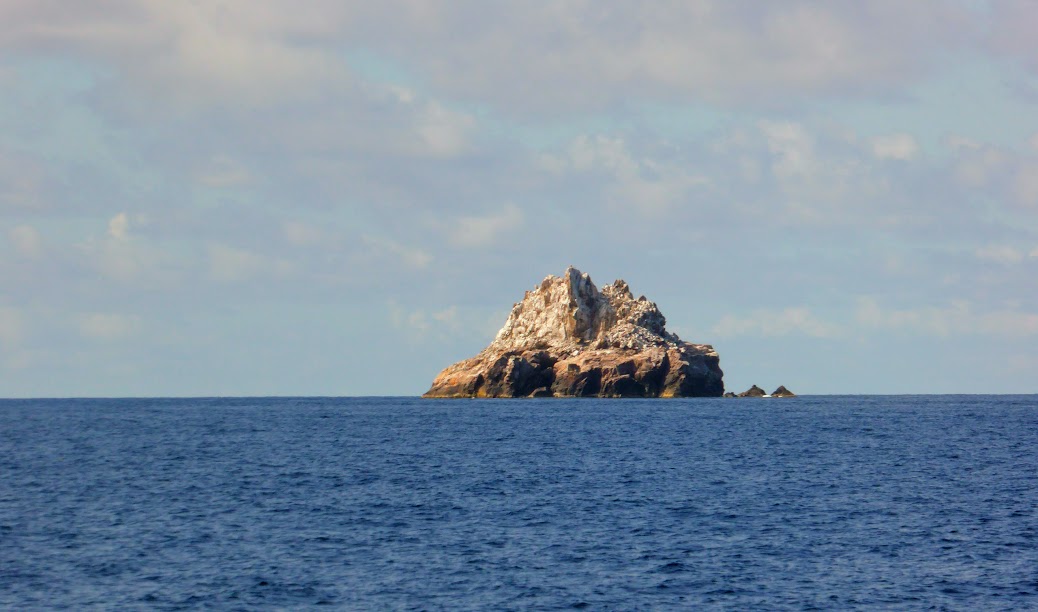 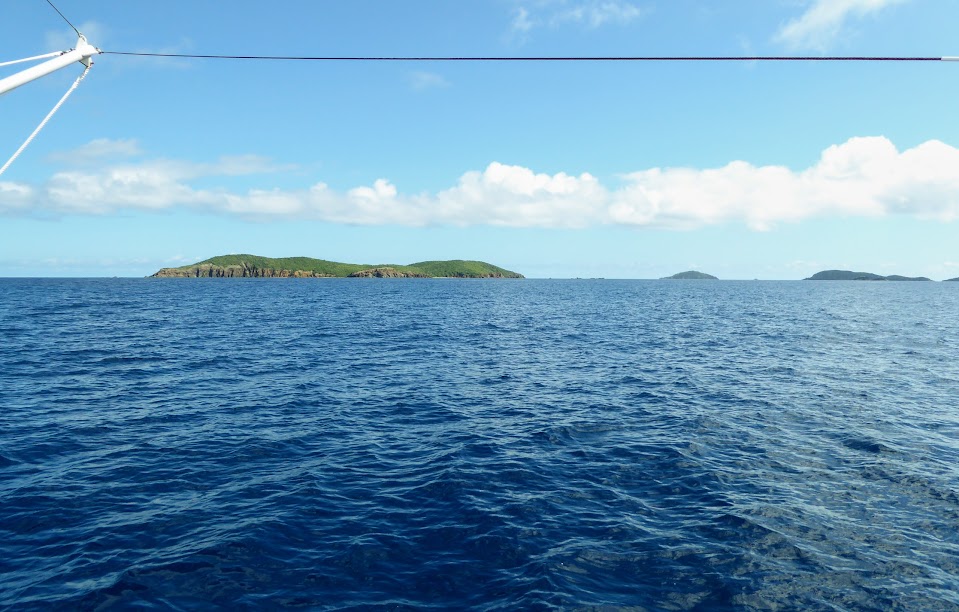 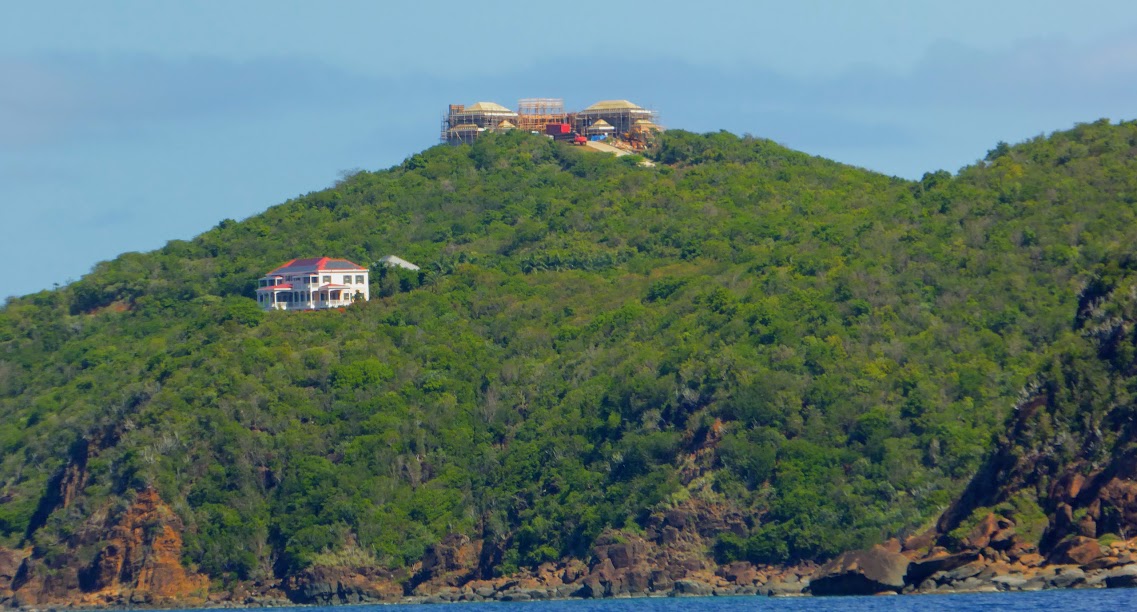 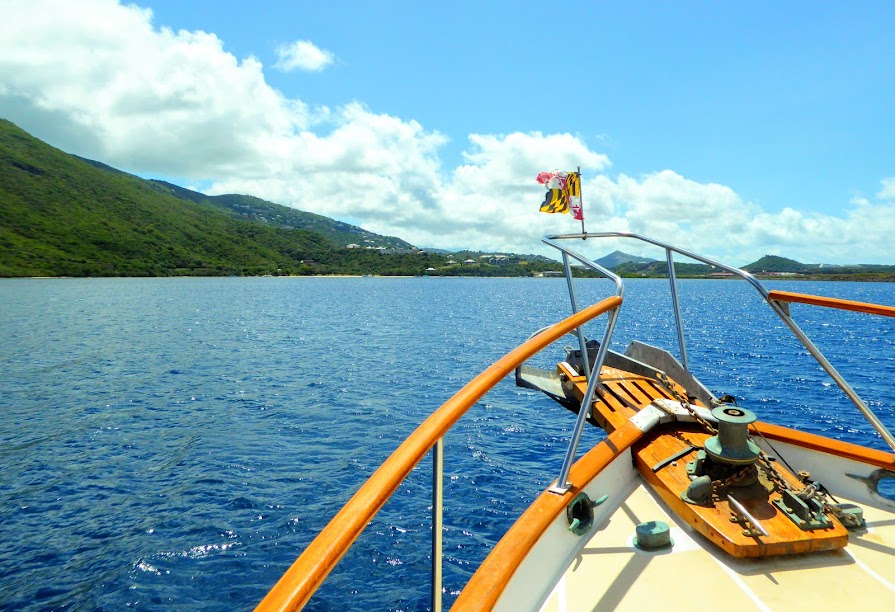 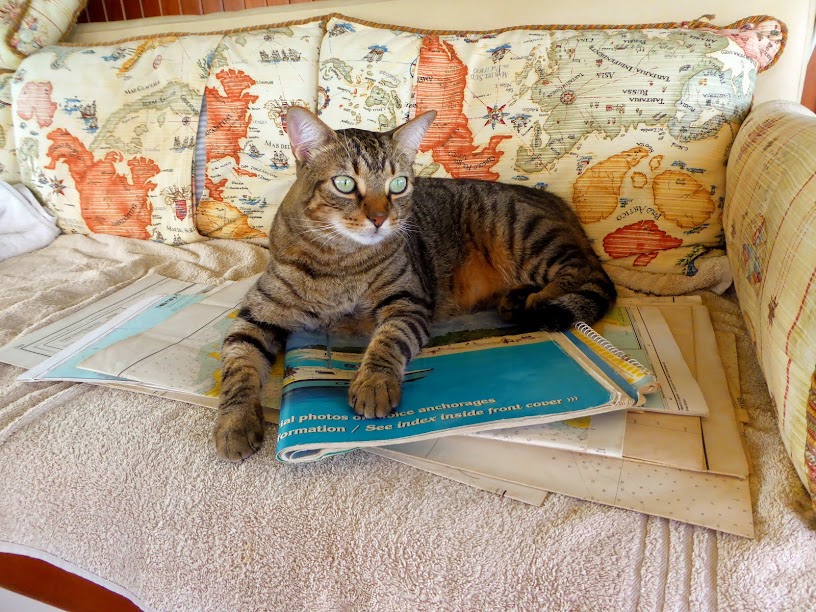 We chose to anchor in Brewer’s Bay for several reasons: it was a quick ride to the airport, for me to fly in and out, it was much less crowded than the bays closer to the town of Charlotte Amalie,  it had easy beach access for leaving the dinghy and from there it was just steps to the main road. 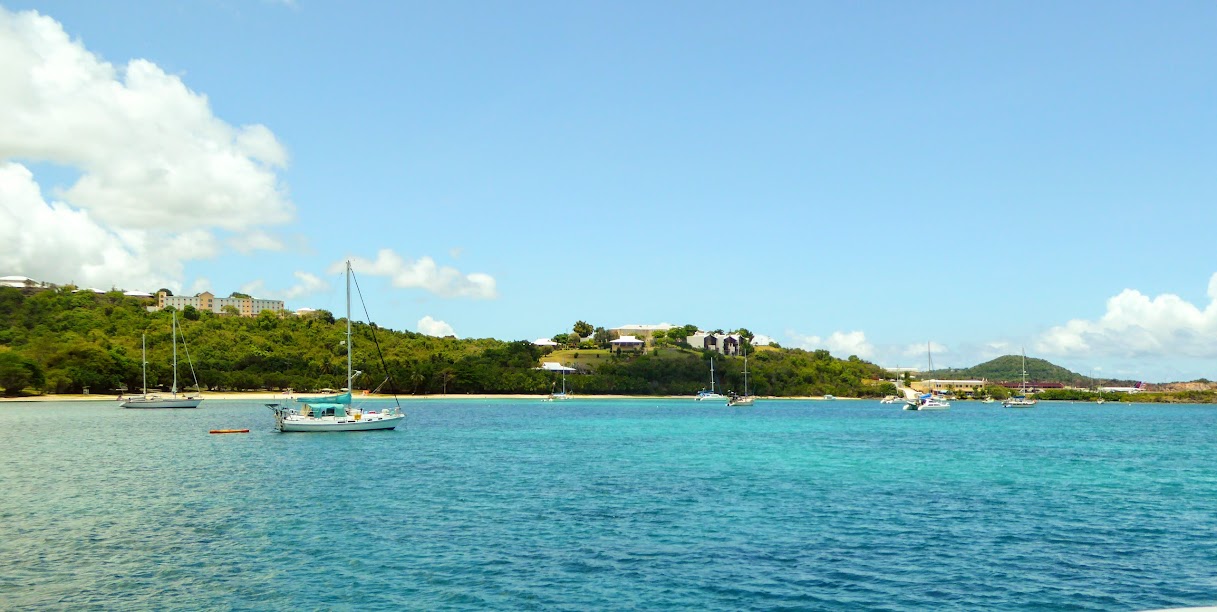 The anchorage was definitely close to the airport.. 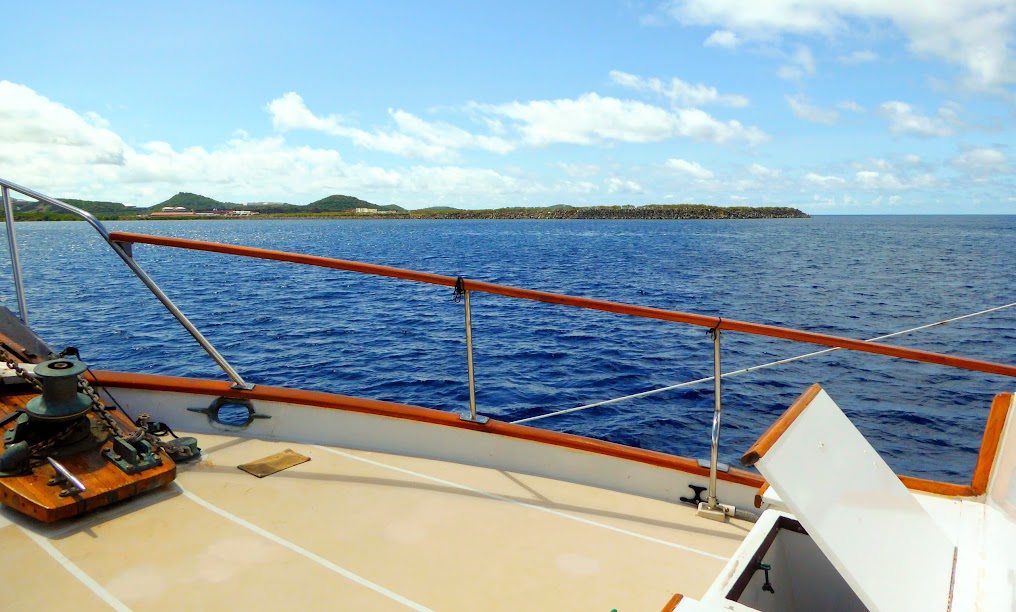 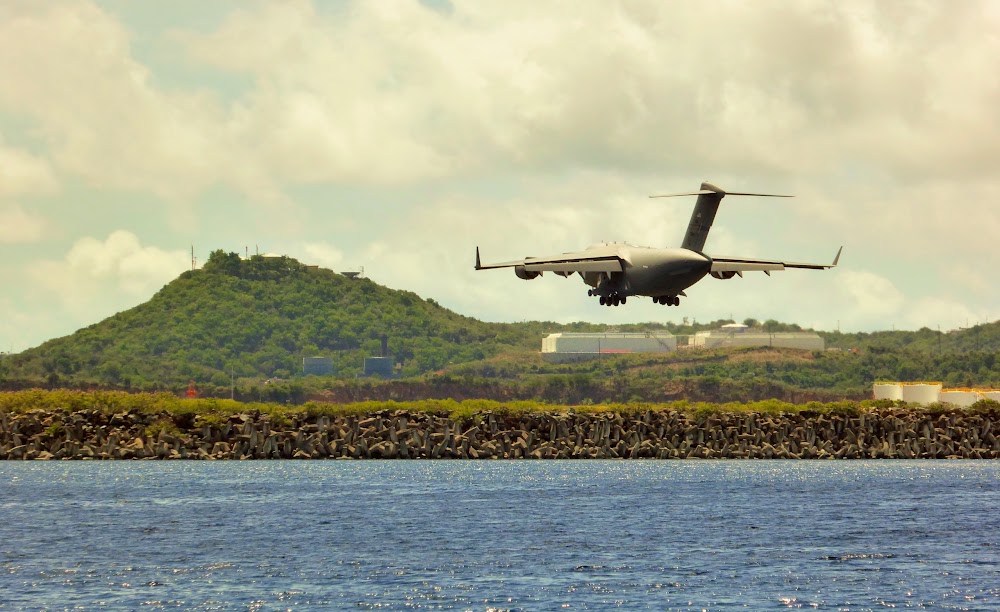 However, the views on the other side of the bay more than made up for the incoming and outgoing planes: 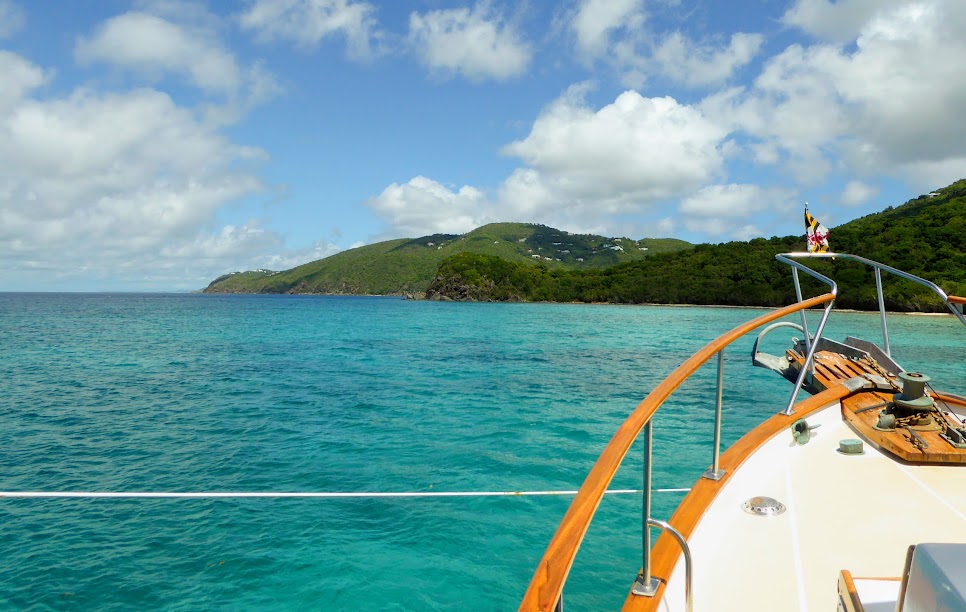 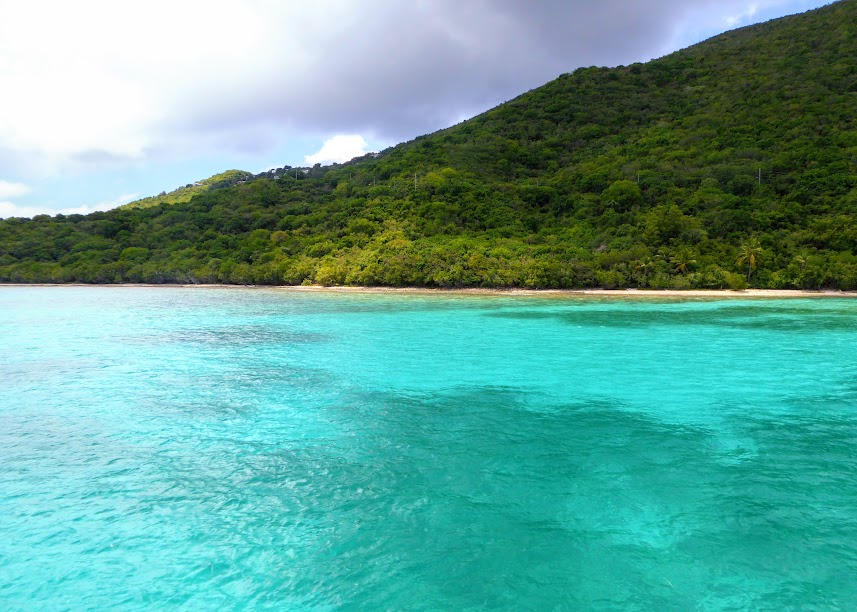 We also came to Brewer’s Bay to meet a couple who had been following our blog. Tristin and Martina had recently began cruising, and we’d exchanged emails about  questions and concerns as they prepared to leave. They are the first blog followers that we’ve gotten to meet in person, and it was fun to spend a bit of time with them, before I headed back to the states.

We’d made some good easting from Puerto Rico to St. Thomas, and I could just as easily fly home to the states from here. Before I left, our first order of business was to stock Scott up with food (and drink) while I was away, so we headed for a grocery store. Safari buses service the island, for $1.00 per person, per ride, and it was just a short walk (up a steep hill) to catch one that would take us to town. 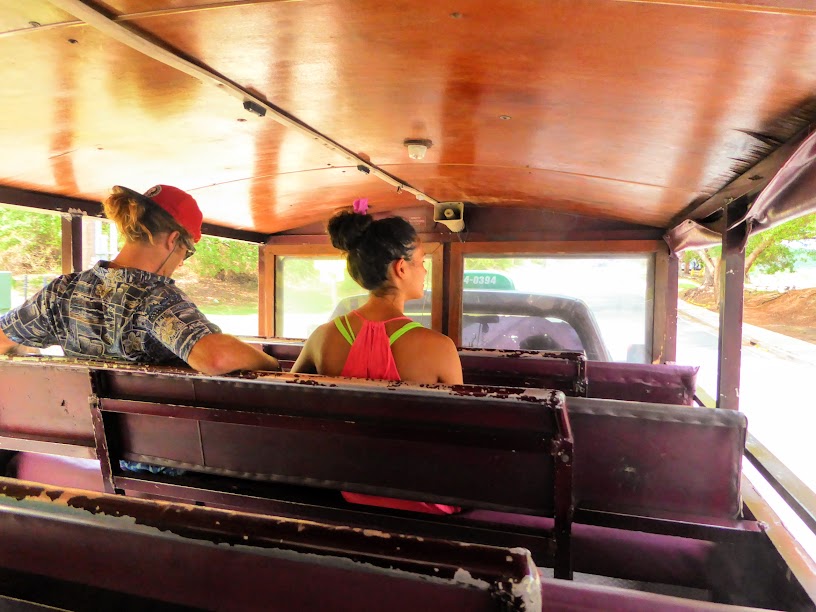 There were doorbell-like switches that ran along the ceiling of the trucks. When you neared your stop, just ring. As we jumped out and paid the driver, Scott thanked him with a friendly “Gracias!”  He’d obviously need time to undo 15 months of Spanish language on the brain. 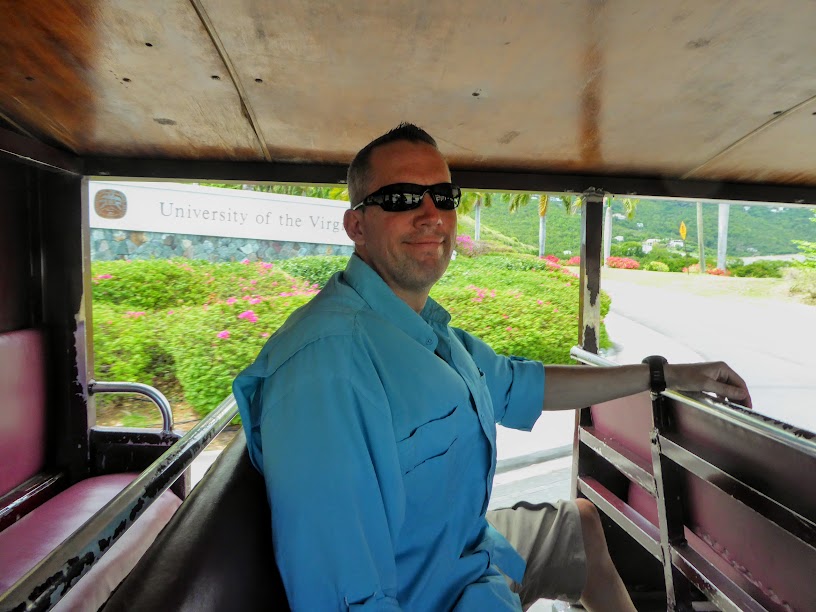 We found a grocery store that was ok, and a liquor store that had one of Scott’s favorite spiced rum’s he hadn’t seen since leaving Key West. There was also a gourmet food store, where we chose some hard to find goodies, but no food for everyday meals. Before heading back, we walked through the cruise ship terminal’s duty-free stores. The stuff may be duty free, but they more than make up for that in price; it ain’t cheap.

Of course, St. Thomas is a popular cruise ship port. We’re always amazed at the size of these things, and how they keep getting larger and larger; like small cities! 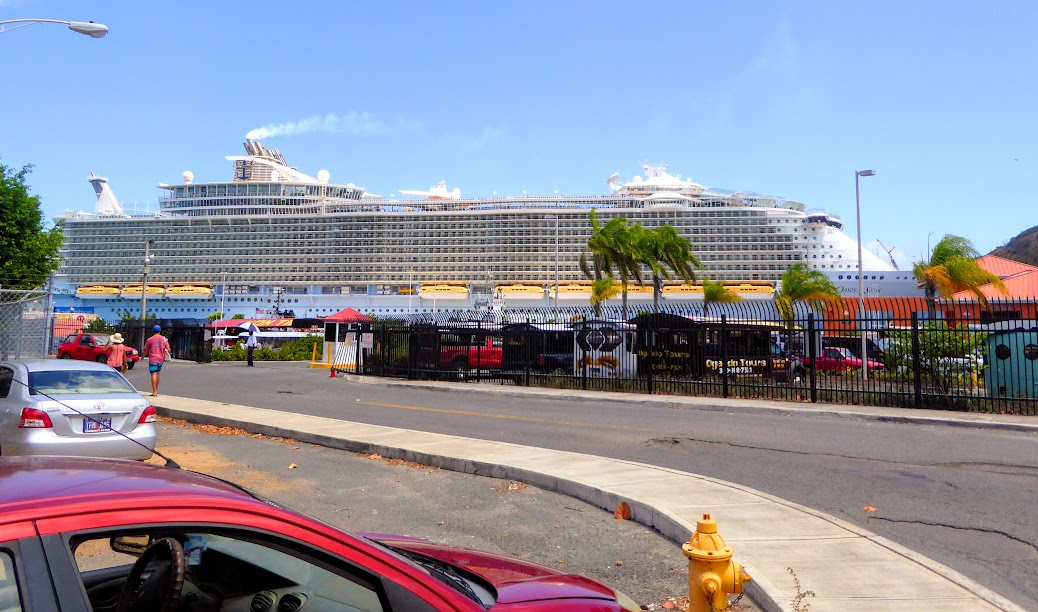 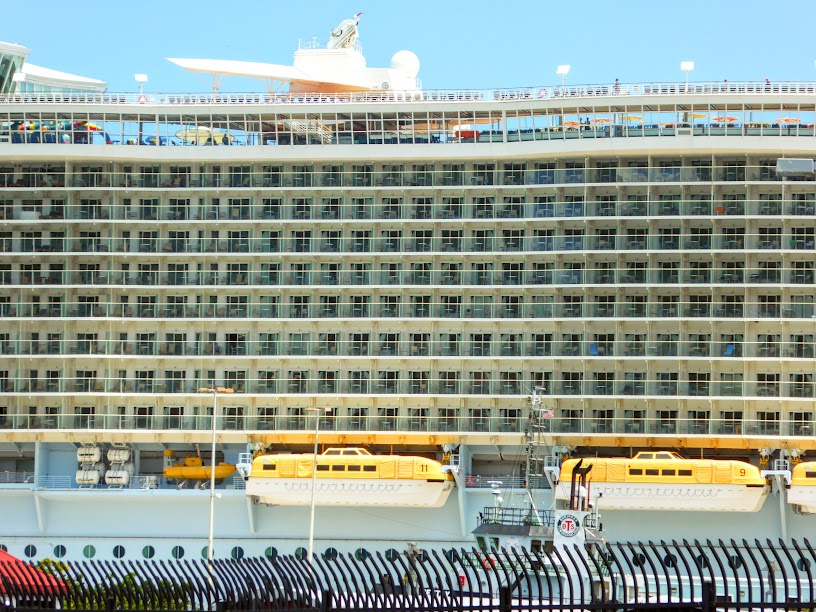 We passed all sorts of safari trucks, waiting to take disembarking passengers to their excursions, tours and shopping in town. 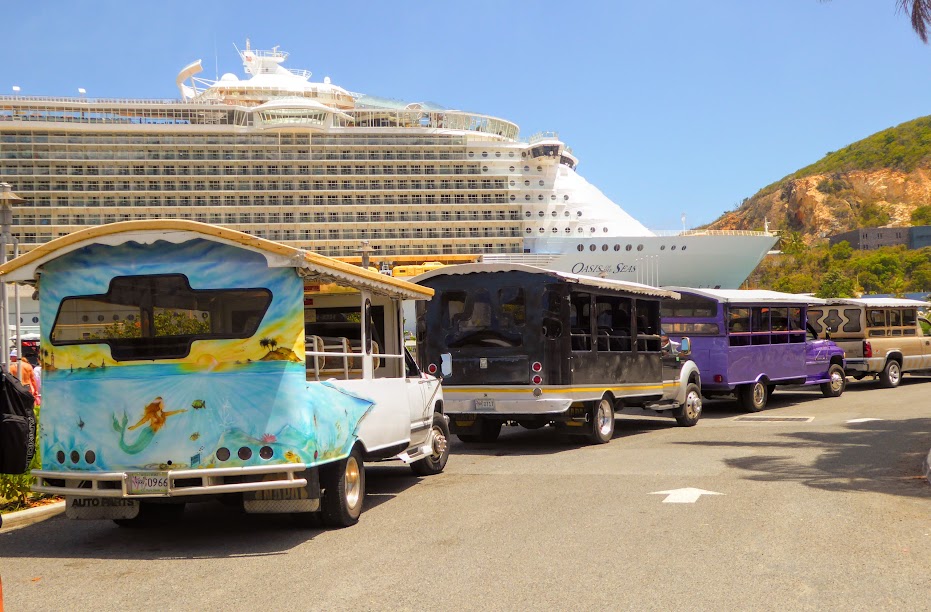 We arrived back at the dinghy at Brewer’s Bay beach, only to discover that someone had tried to steal the motor. They’d gone to great lengths to try and get it off the back of the dinghy, even though it was locked securely to the boat, and the boat was securely locked to a tree (with a stainless steel chain). They managed to break the pull-start and damage the fuel line in, along with getting tons of sand inside the dinghy while they were at it.

Needless to say, Scott  was more than miffed. We’d traveled 15  months, through Mexico, Central America, Panama and Cartagena, without any kind of attempted theft whatsoever. Not three weeks back on U.S. territory soil, and bam, an issue….welcome home.

Scott managed to get the motor started, and once we were back on board Sea Life, and had unloaded our things, he got to work fixing the damage, with the cockpit becoming his usual workshop. 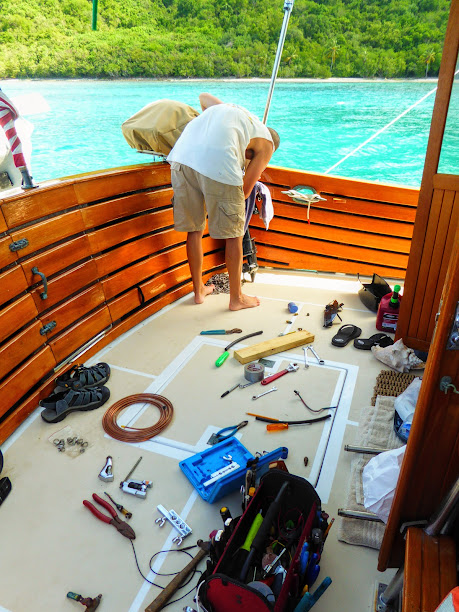 Without to much trouble, Scott repaired the motor, Macgyver-stye, and rewarded himself with an Aluminum Princess excursion. 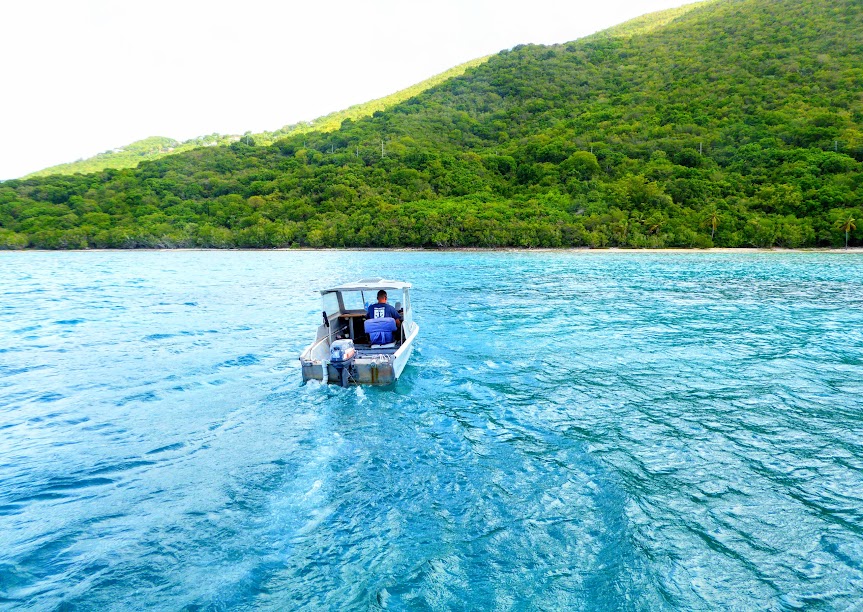 Martina told us of a new grocery store that had recently opened, in walking distance of the anchorage. Scott did a recon mission, and came back with a good report, so one morning we walked up the hill and down the other side, to the store. It wasn’t eye-catching from the road, you’d hardly notice it as a grocery store, but inside was a different story. 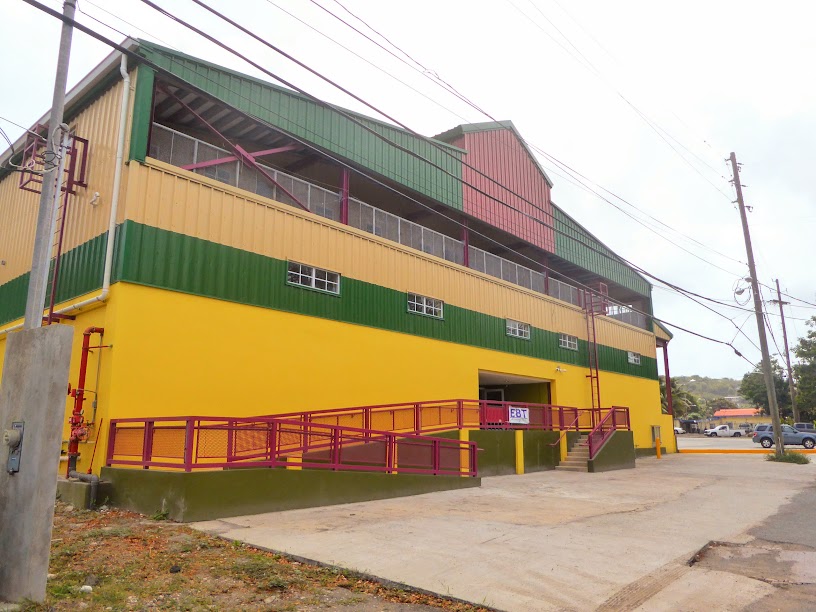 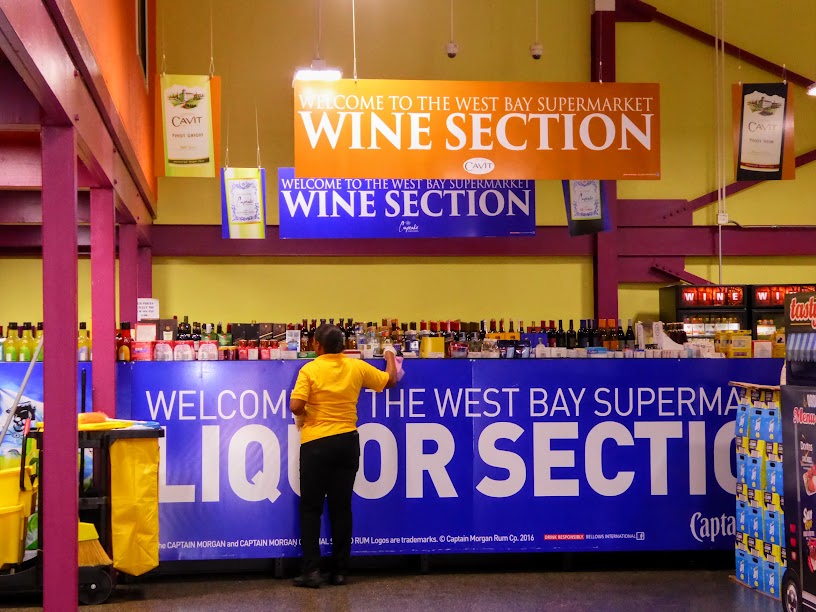 They had a great selection of wine, beer and liquor, as well as a decent choice of produce and meat. I loaded up on items to make meals for Scott, and he grabbed some lunch meat from the friendly deli lady. 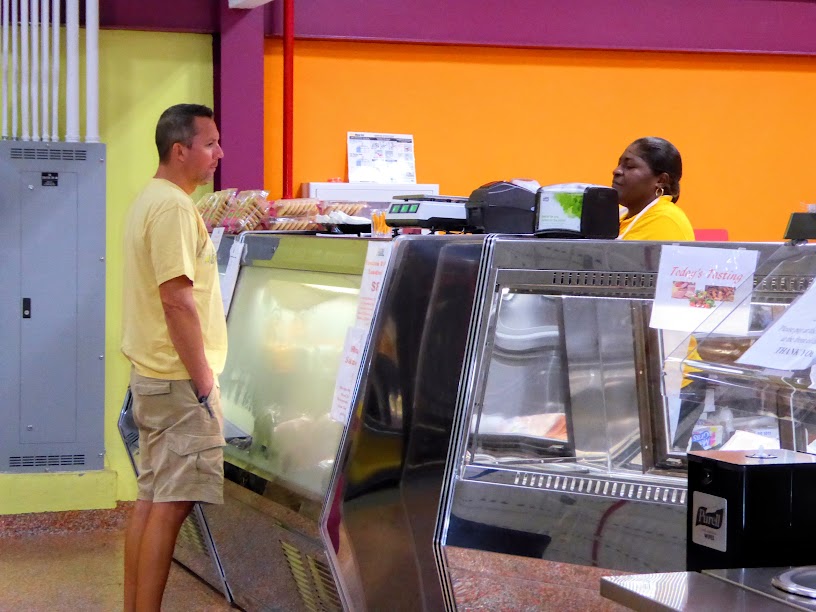 The boat was stocked with food and drink, and I was off to Virginia. Tristin and Martina had bought a car for their stay on the island, as she was working as a nurse at the nearby hospital. She was nice enough to taxi us over to the airport, and I was off, leaving Scott and Howard to have some “bro-time” aboard Sea Life. 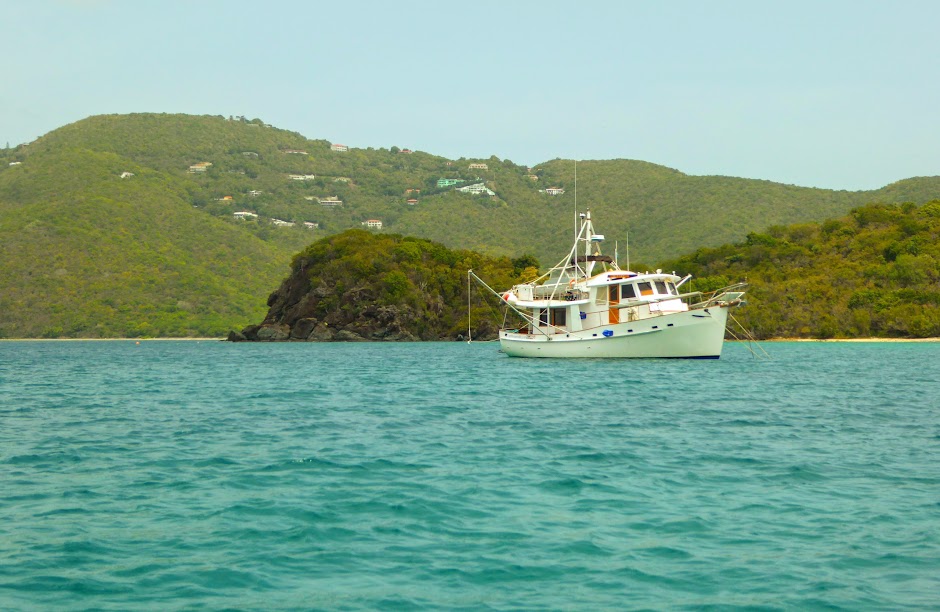