Scott and I recently realized that we had, in fact, not climbed to Morgan’s Head, as I’d mentioned in a previous post. We’d scaled the two sets of crazy-steep steps, and enjoyed the beach on the other side, but we failed to realize that at the other end of the beach, a trails leads to….Morgan’s Head!….so off we went, again.

Climbing past the beach, I noticed the all to familiar rope rail….yeesh. Luckily, the incline was not nearly as steep as what we climbed in Guanaja. We assumed the rope was meant to help with footing in wet weather.

Along the trail, there were several hand painted tiles. One marked the “triangle of trade.”

This was all well and good, but Providencia was outside the triangle of trade (note the placement of Scott’s stick pointer)…..hmm.

As we walked, there were several places to stop and enjoy the views below, and across the water.

After climbing across a bit of rocky trail, we came up to the back of Morgan’s Head. It was worth the walk, the view was beautiful.

The nearby shoreline reminded me of the South Pacific, thick with palms, whose trunks disappeared into blue-green water that looked painted, it was so brilliant and clear.

Scott crawled around the head while I enjoyed the view, and then we headed back to the beach…and Providencia’s answer to StairMaster! 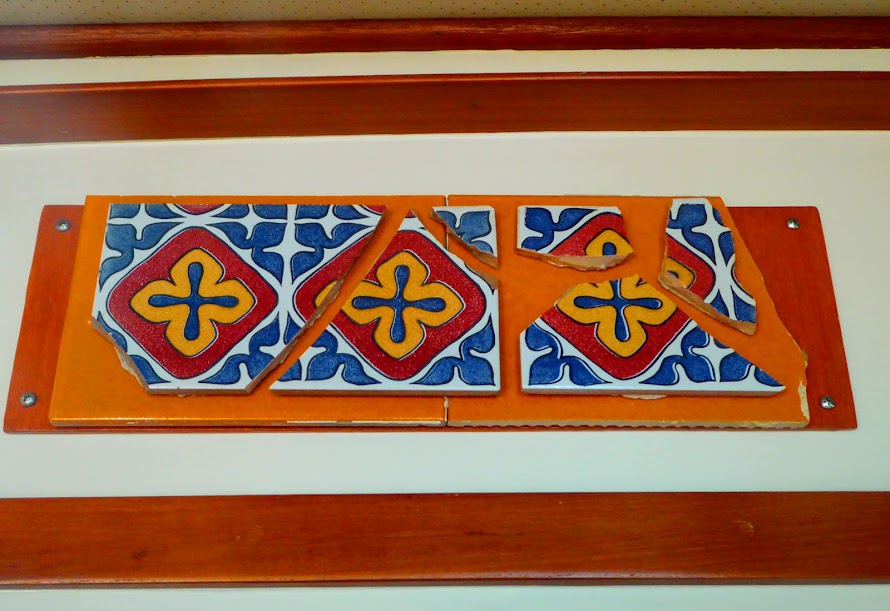 Santa Catalina Island was originally part of Providencia, until the pirate Louis Aury dug a channel between the two (part of what is now referred to as the Aury canal), creating the smaller island. With a population of approximately 100 residents, the island is much less developed than the already less developed Providencia. Connected to its larger sister-island by Lover’s Bridge, Catalina has one shop, a few beautiful beaches and a couple of restaurants.

Lover’s Bridge has two wooden spans that are connected by a floating section, which has a low arch for small boats to pass under.  Before the bridge was constructed, people crossed back and forth in dug out canoes. The colorful bridge provides a cheerful link between the two islands.

Just off of Catalina Island is a huge rock, carved by wind and waves, that resembles a human face. It’s named after the pirate Henry Morgan, who sailed these waters in the seventeenth century. It was overcast as we came past Morgan’s Head on our way in, and I’m not keen for a trip past it in the Aluminum Princess, so I borrowed this photo from the internet.

Morgan made Providencia, Santa Catalina and San Andres his personal refuge, and used the area as a base for continuing attacks against the Spanish Empire. Rumor has it that there is still much of his treasure buried on the island, and that there are chests of gold and jewels under Morgan’s Head (Scott is practicing his free diving skills!). Providencia was a haven for pirates, and many locals claim to be descendants.

We can see the hill above Morgan’s Head from the anchorage, and set out one afternoon to climb it. It’s a easy go for the most part, following the paved road that runs along the water’s edge, and then up a million steps.

At the top is a statue of the Virgin Mary, and a fort that dates from the days of piracy on the island. The fort was used to defend the area, as it had a clear view of the surrounding area and reefs.

There were also great views of the anchorage below.

We then climbed down a million more steep, sloped steps, to Fort Beach below….

Then back up, and back down the other side again; it was a sweaty go. Note to self, climbing two million steps in the early morning is a much better idea! Here are more photos of Catalina Island, and our climb above Morgan’s Head.