We left Bequia, and made an overnight run to the island of Guadeloupe. The island is butterfly-shaped, with a mangrove channel running between the two “wings.” We were headed for Deshaies (pronounced Deh-HAY), on the island’s northwest coast, a popular stop-over spot for cruisers traveling north and south along the Eastern Caribbean island chain. 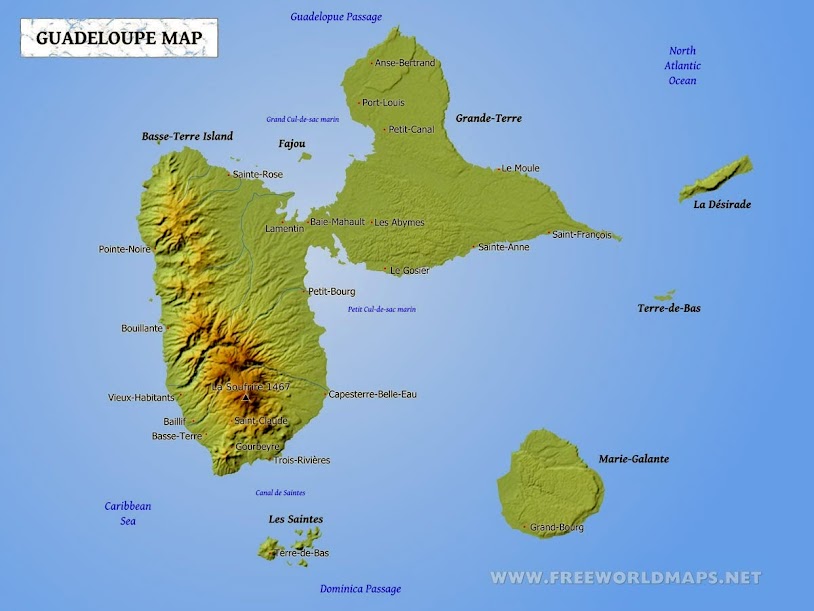 Scott put both fishing rods in the water soon after we were underway, hoping for a bite. Unfortunately, despite patiently waiting, he got skunked. We traveled off the coast of St. Vincent, and as dusk approached we passed St. Lucia, getting a final look at those majestic pitons. 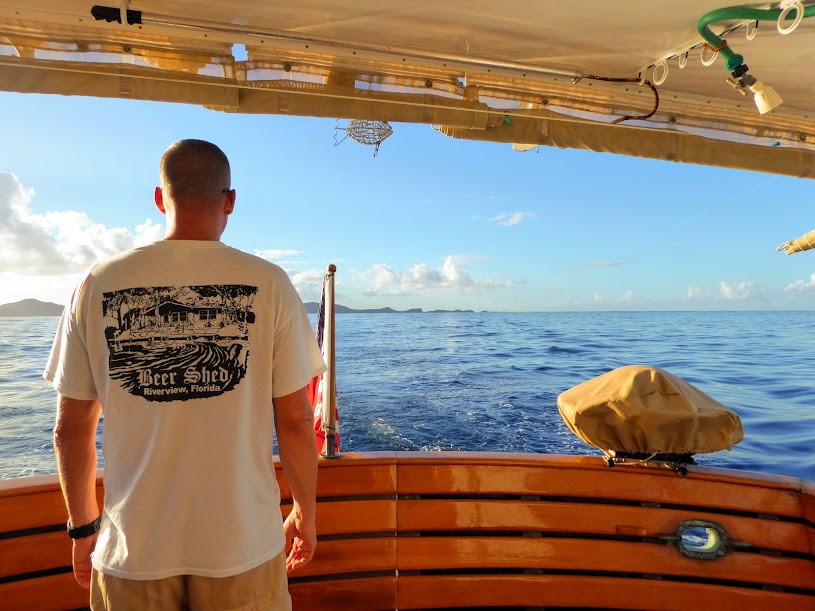 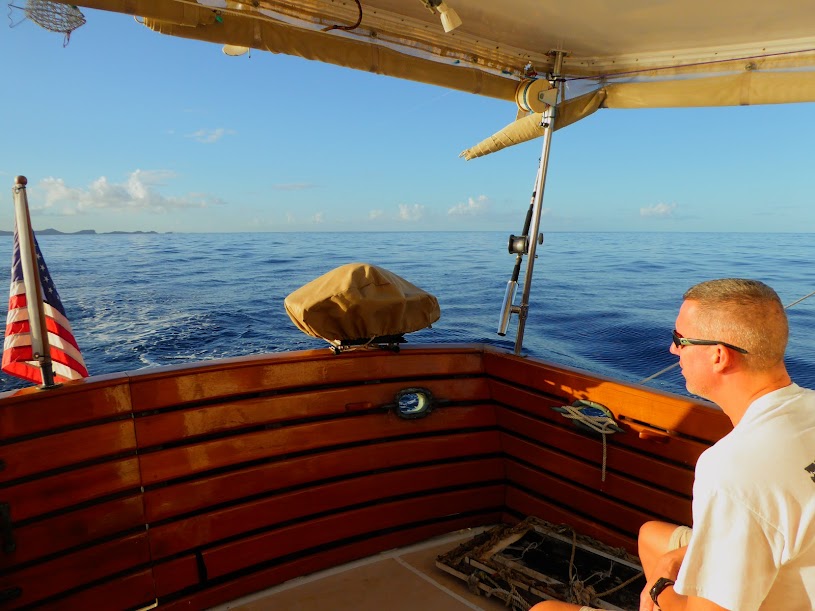 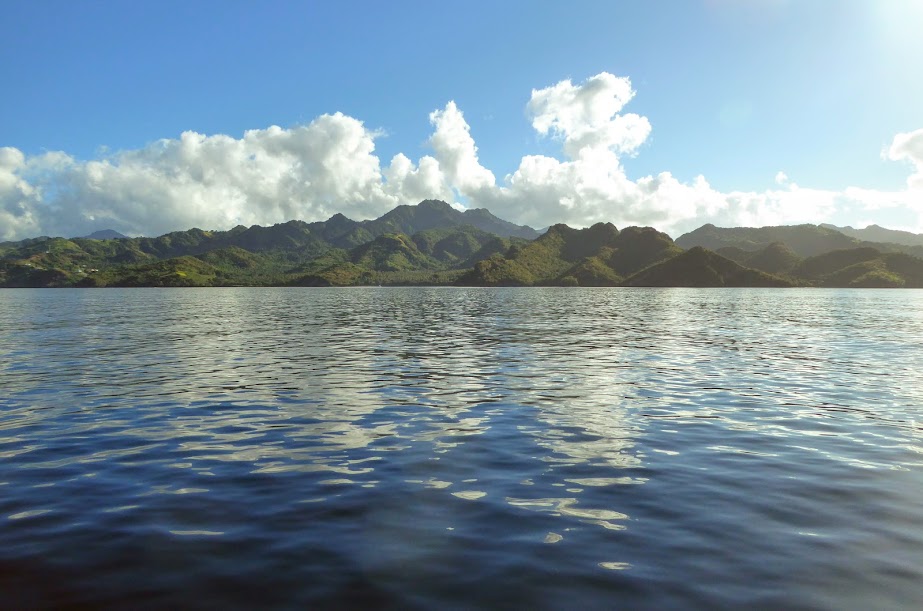 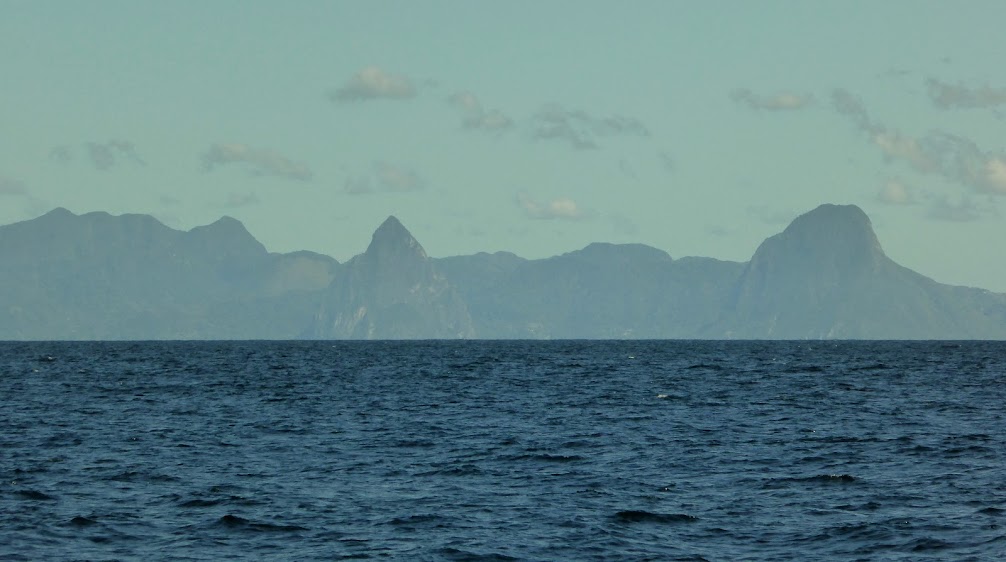 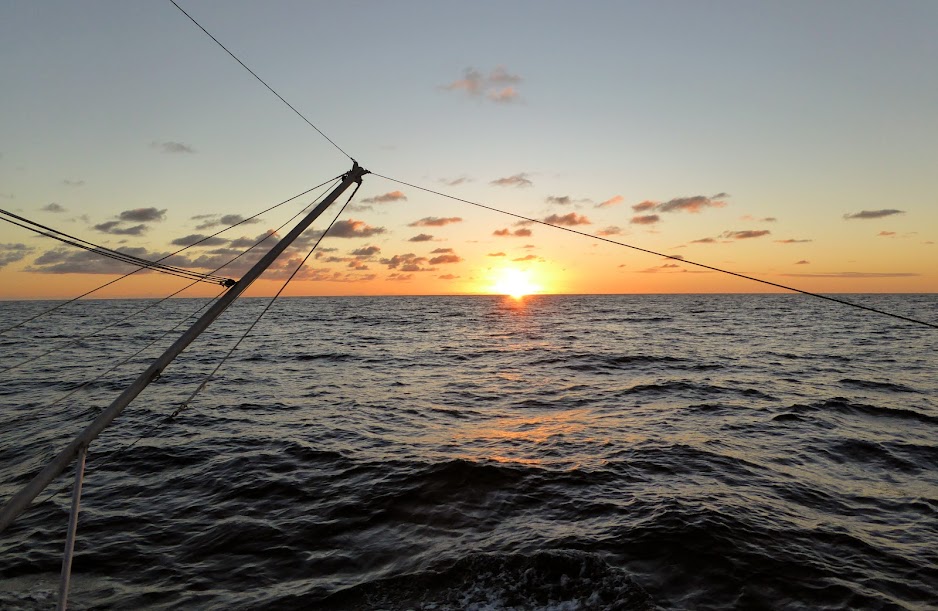 We dodged storms in the early morning, as Howard slept on. 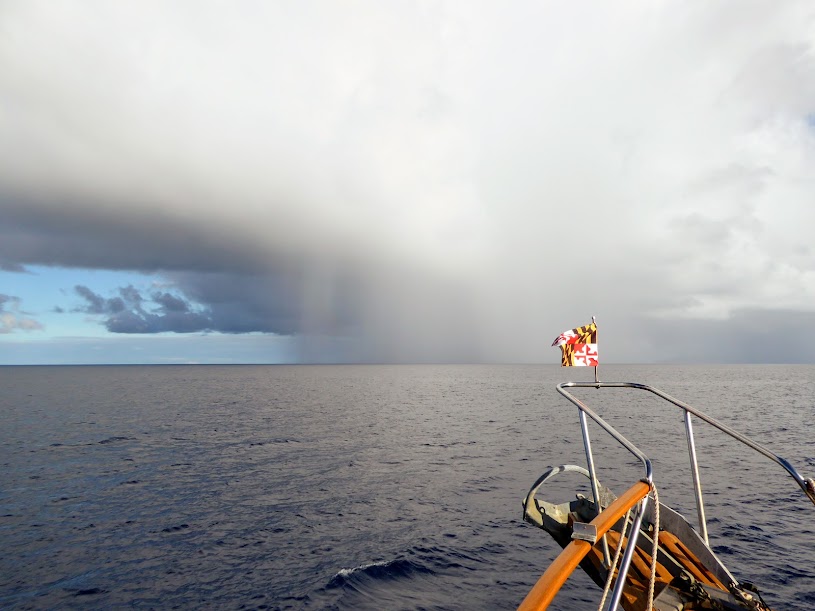 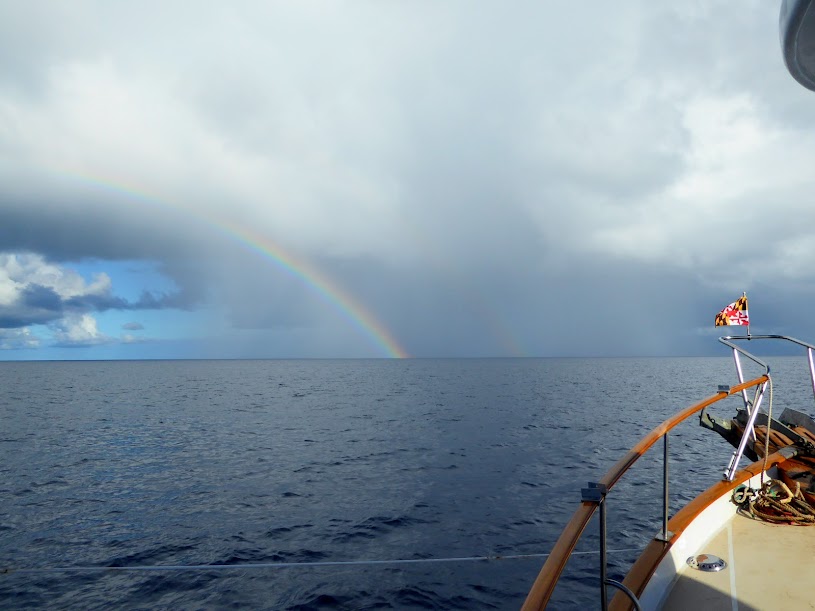 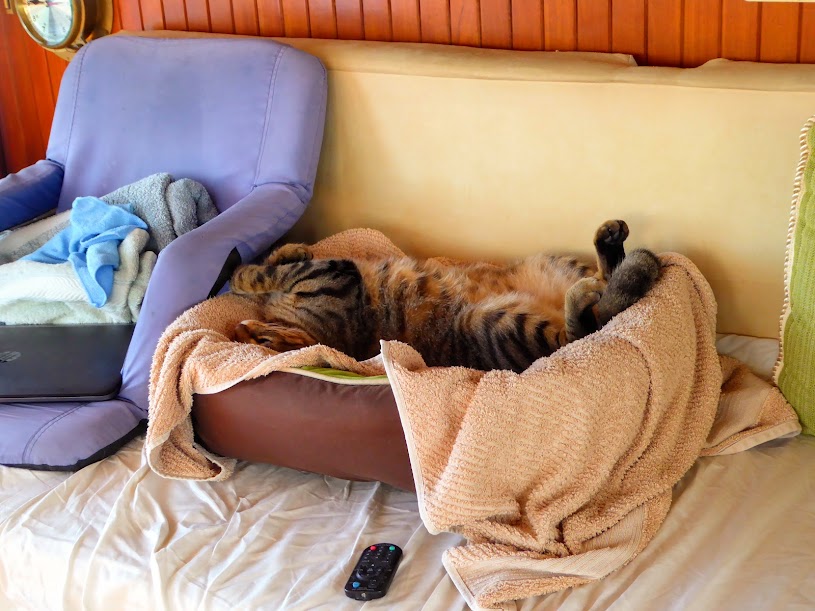 Like Grenada, St. Lucia, and it’s French sister-island of Martinique, Guadeloupe is  volcanic, with waterfalls, a rain forest, crater lakes, and also includes several small neighboring islands. As we approached, hills valleys and pastures lined the shores, with steep mountains capped in clouds. 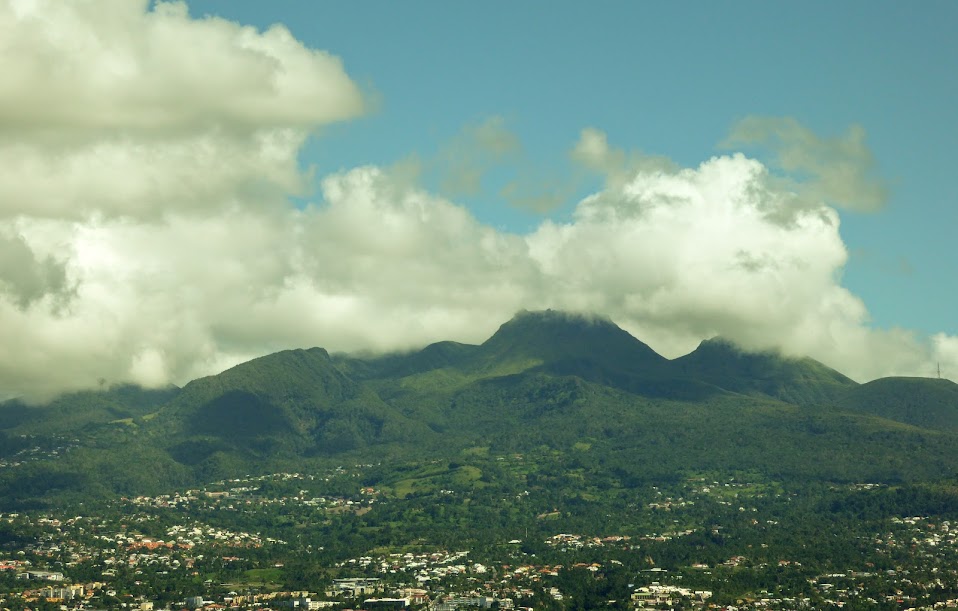 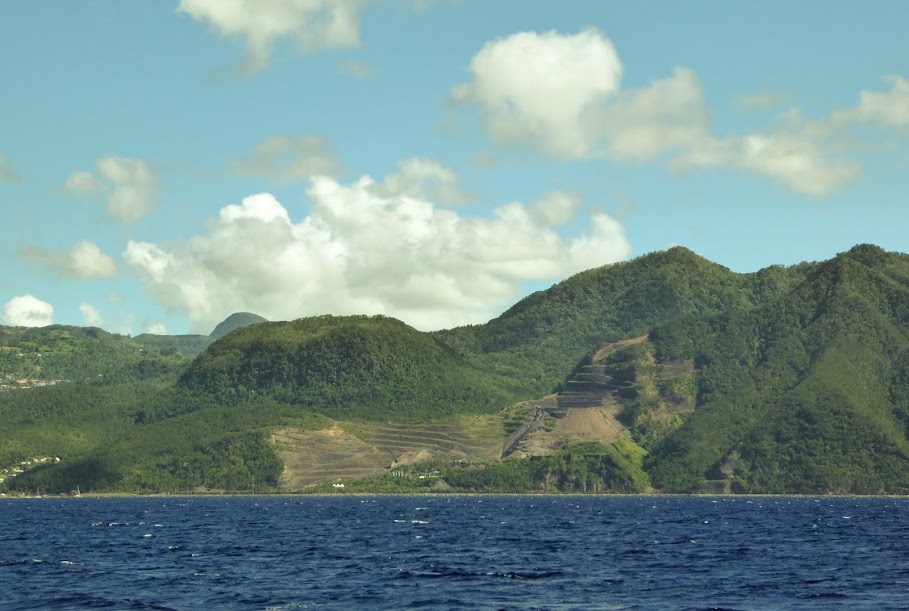 While I was off-watch, catching my few hours of morning sleep, Scott had our first whale sighting! It took two years, but he spotted what was most likely a pilot whale, off the coast of Guadeloupe…. and I missed it! 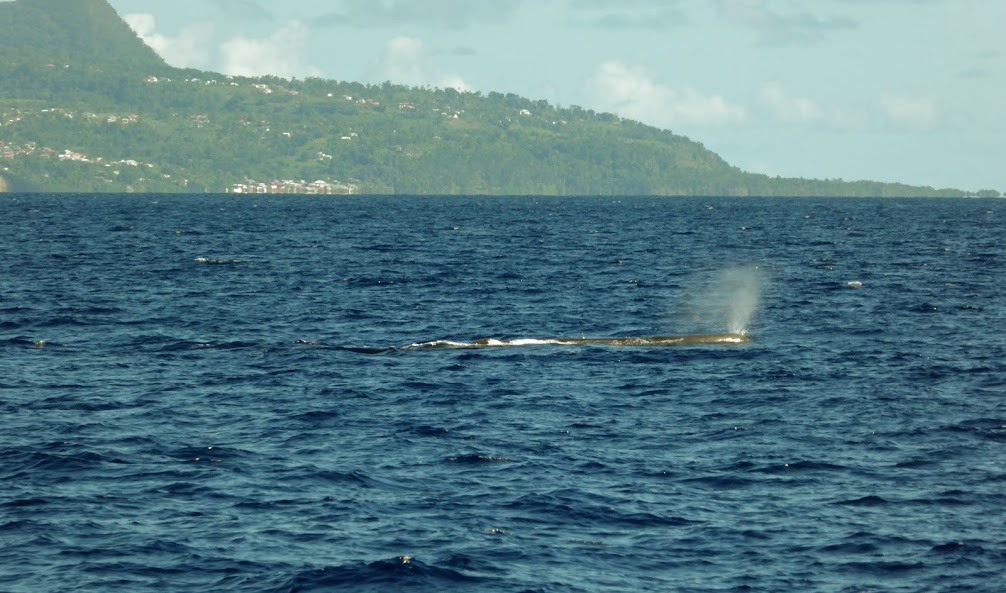 After the early morning storms passed, we had flat calm weather all the way into Deshaies. 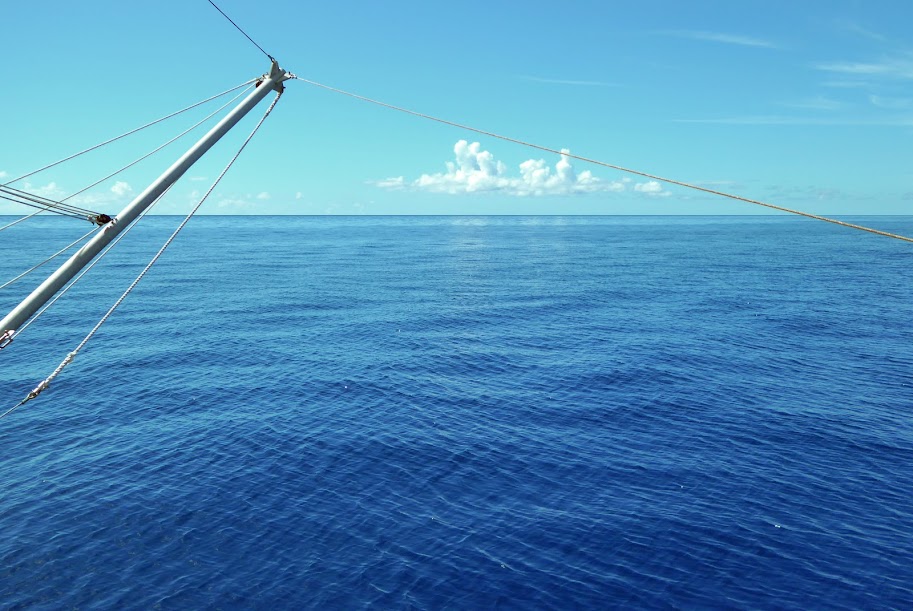 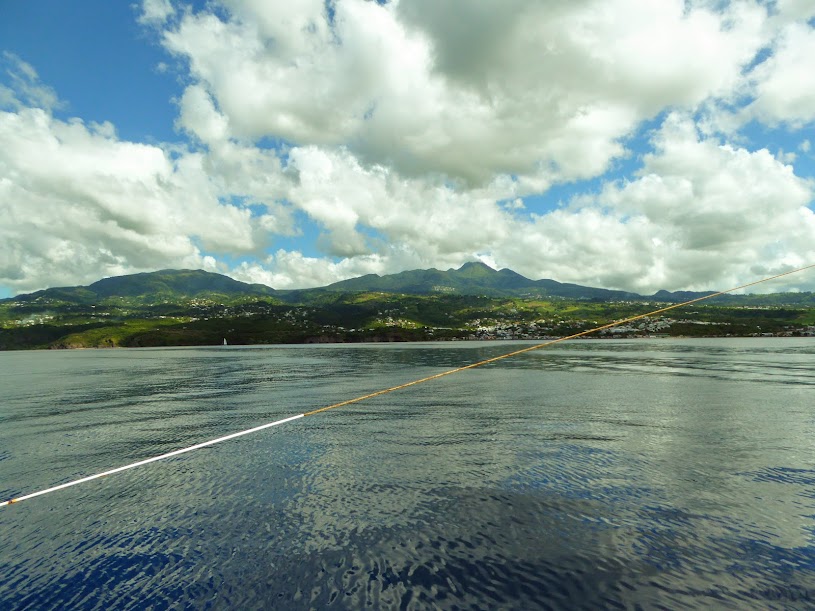 We set anchor in the deep bay off Deshaies, surrounded by hills and mountains, with views of Montserrat on the horizon behind us. 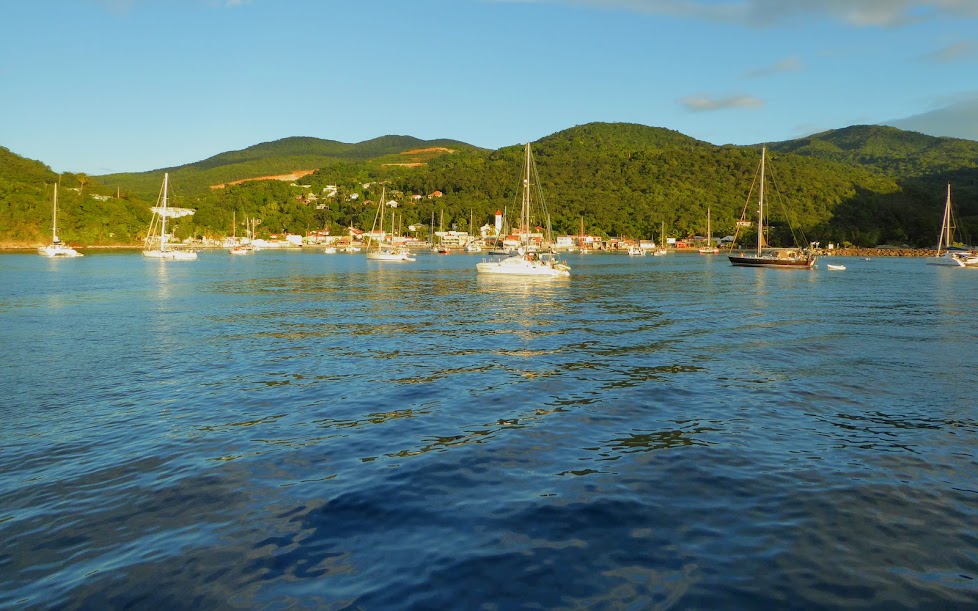 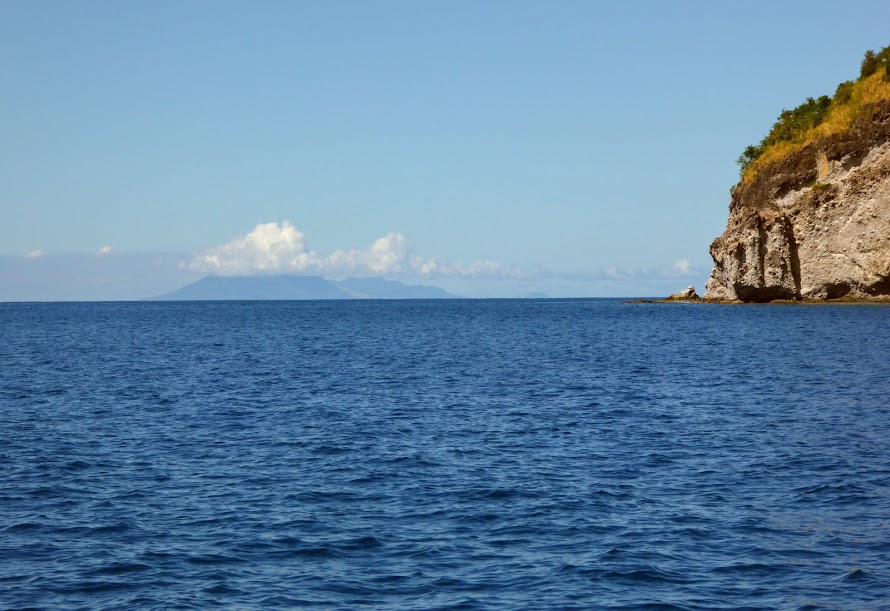 The next morning, we spotted our friends, Alan and Francine (s/v Time After Time), sailing past the bay, on their way to Antigua., where we both planned to spend the holidays. 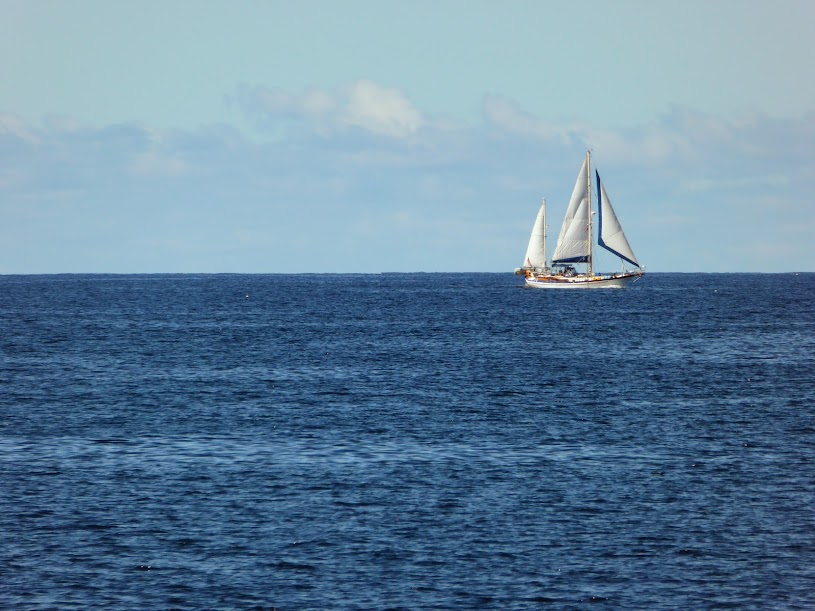 We headed to shore to explore the small fishing village of Deshaies, and completed the insanely easy clear-in procedure for the French islands (fill out a form on a computer, usually located in a cafe or boutique, print, pay a few Euros…and you’re done). Once “officially” French, we wandered the spotlessly clean streets, admiring the houses and shops 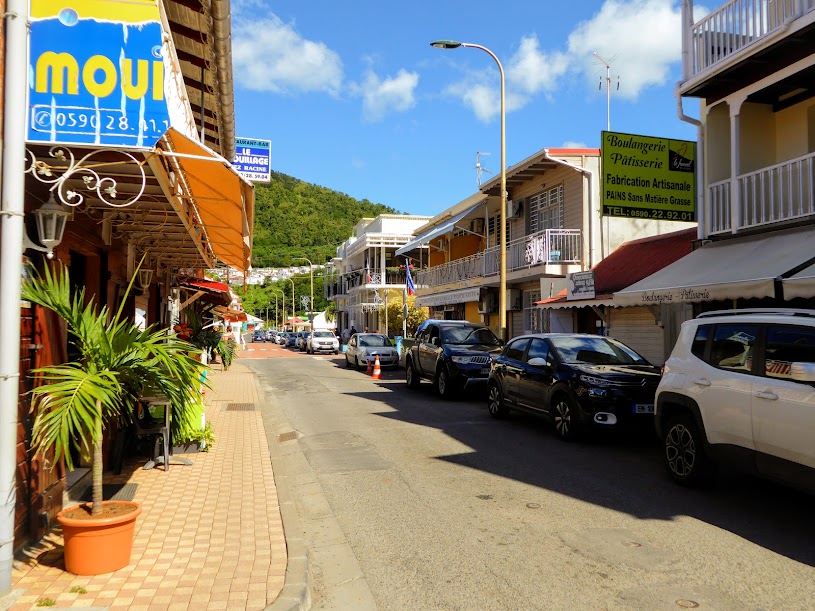 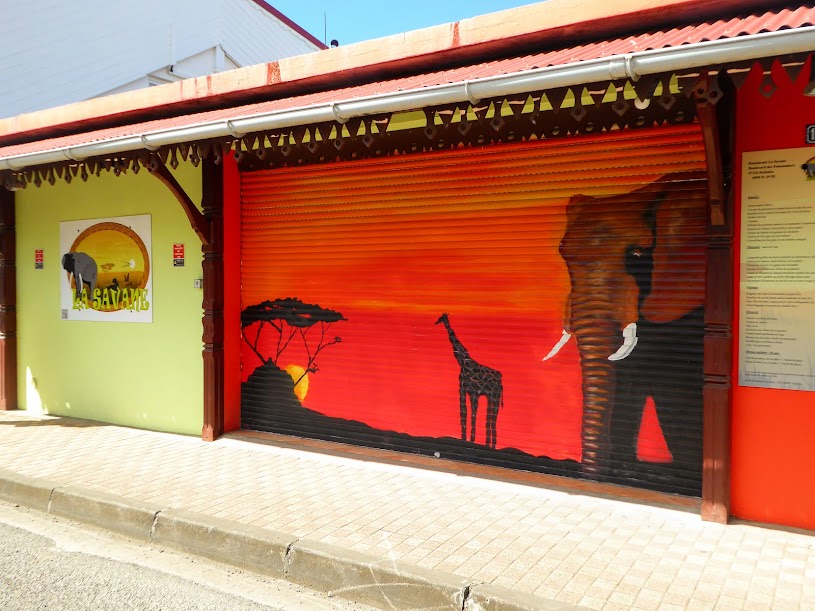 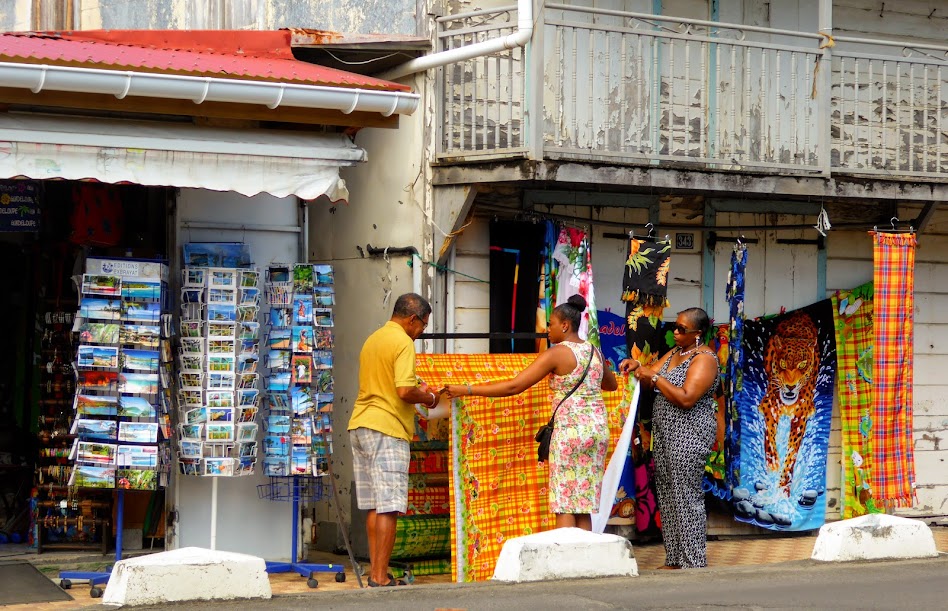 After browsing several stores, Scott found his now-coveted Orangina, and we filled our backpacks full of cans and bottles. We perused several of the colorful, inviting cafes, and contemplated lunch. However, the exchange rate for the Euro means that food and drink on the French islands can be a budget-buster, so we opted for more affordable “jambon and fromage” baguette sandwiches from a boulangerie (French, for yummy bakery) opposite the dinghy dock. 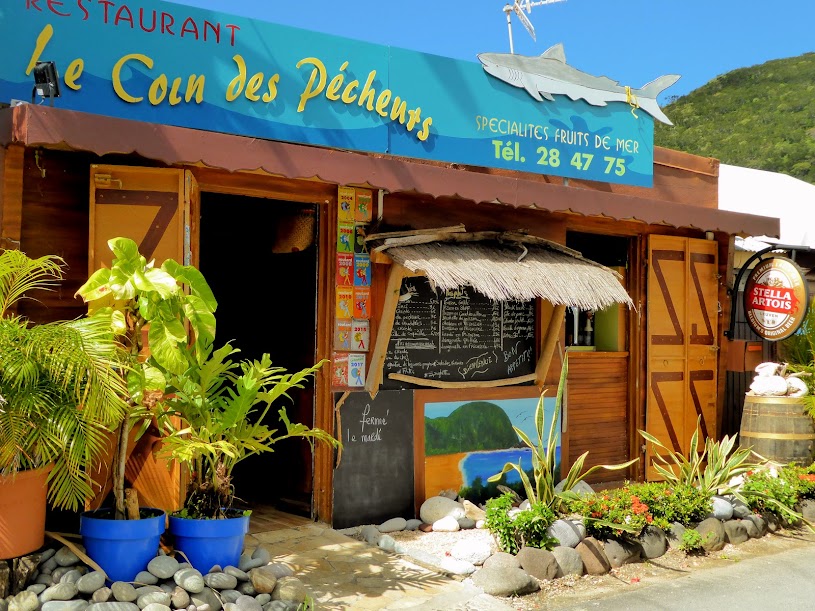 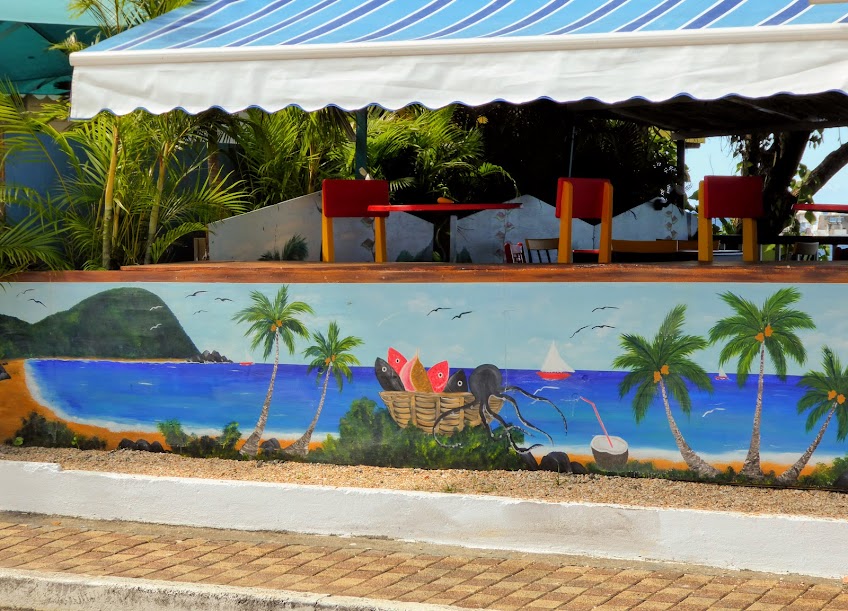 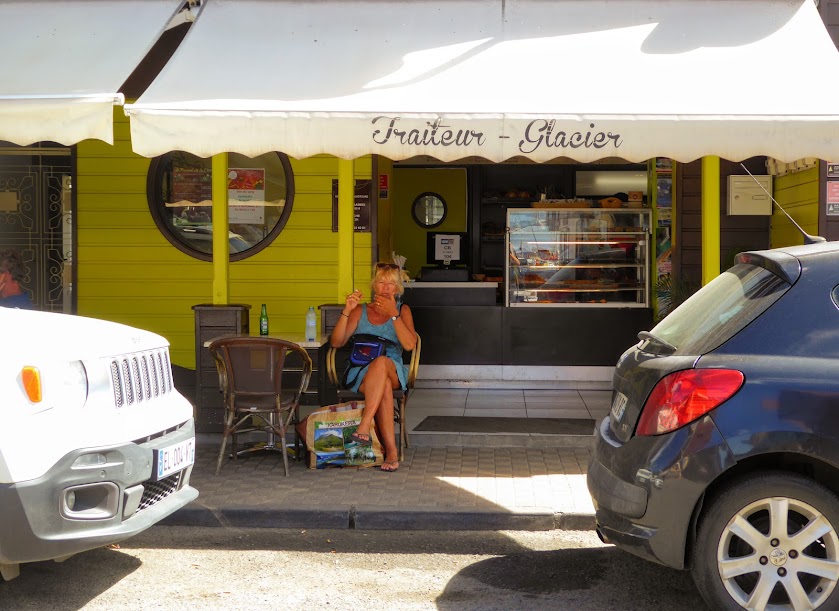 Scott was too hungry to wait until we were back on board, and immediately dug into his crusty sandwich. He was now a French island fan; the streets and buildings are clean and bright, the dinghy docks are sizable and well kept, clearing in and out is easy-peasy and baguettes and cheeses are cheap…what’s not to love?! 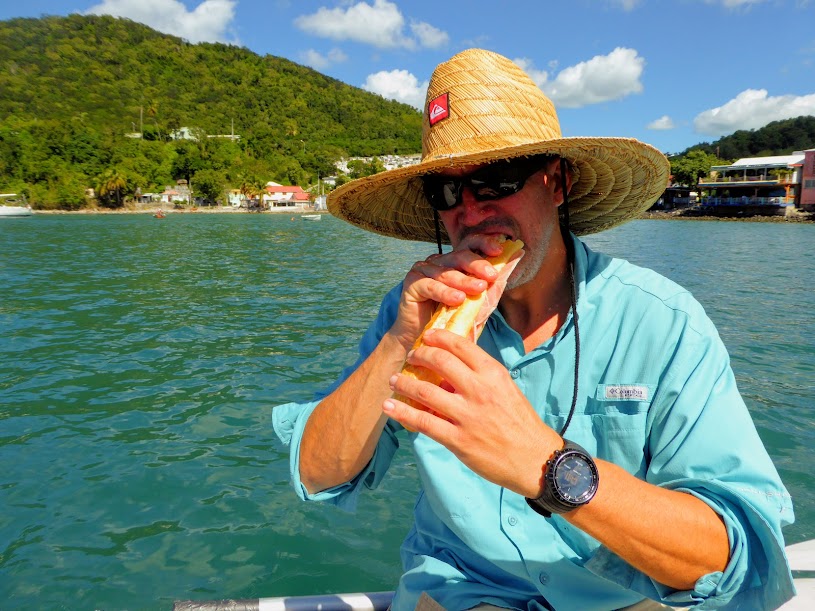 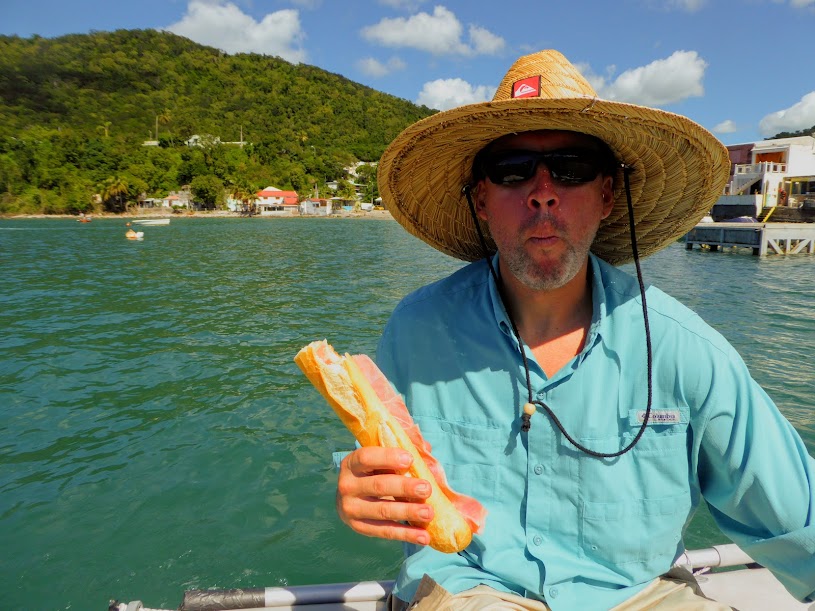 The holidays were just around the corner, and we wanted to be in Antigua before the winter winds set in, so after only two nights at anchor off of Deshaies, it was time to move on. Here are more photos of our brief stay in Guadeloupe. Au Revoir!