We’re alive and kickin’, here in the San Blas islands! Internet service is more available than expected, but usually requires precise placement of a cell phone (used as an internet hot spot) at the highest outside point possible. It’s a familiar sight here, to see phones encased in plastic bags, hanging from, or being hoisted up a mast. At best, the service comes and goes, making uploading challenging, with the strongest hours coming in the middle of the night…oy! Some people have boosters installed on board, to up the strength of the signal. Others travel to anchorages that may have better service.

We do not have a booster, and are trying not to spend our time chasing the internet, so getting a signal worth doing anything, for any amount of time, is basically a crap shoot.

I’ve finally caved, and have spent several all-nighters (with nap breaks during weak service periods) while we’re in a location with decent service, to catch up a bit, and share what we’ve been up to for the past two months. Yes, I guess I could have written a post without photos attached, but that would just be mean.

We made our way from Linton Bay, on Panama’s mainland, to the eastern Holandes Cays in the San Blas islands, where we anchored in the Swimming Pool. Named for it’s shallow, clear blue water, the pool lives up to it’s name. The anchorage provides an nearly 180 degree view of the surrounding reef, and the breaking waves are easily heard day and night. 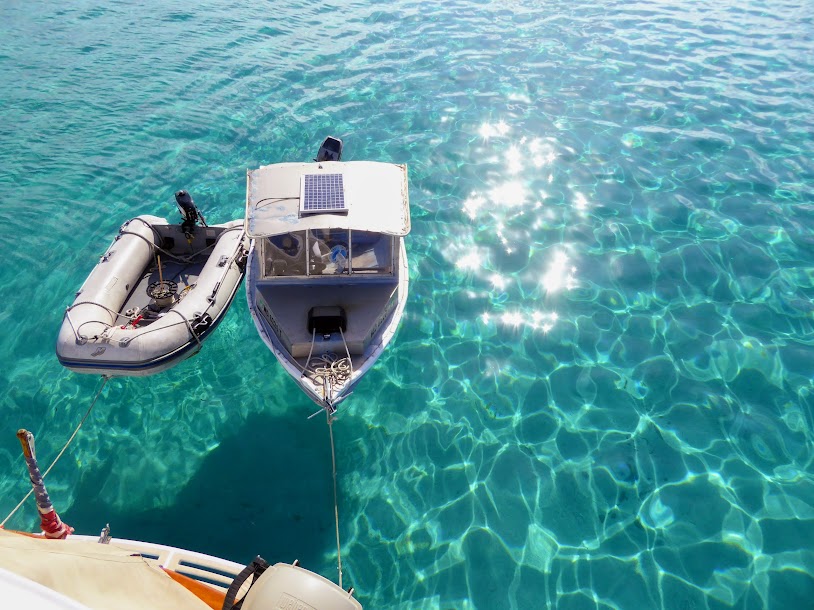 The views behind us were just as beautiful, with the colors of patch coral in the distance. 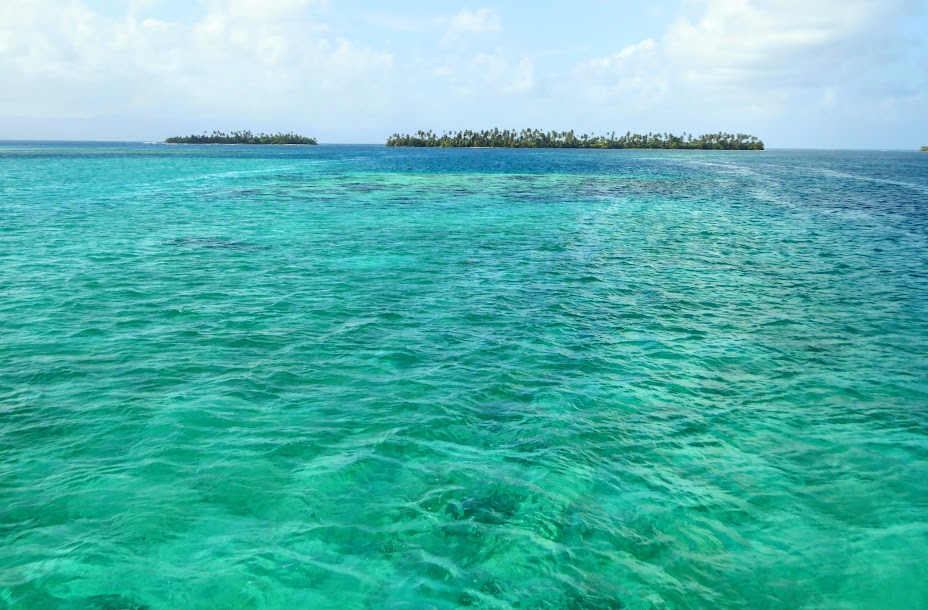 On our first morning at anchor in “the pool,”  we had a visit from Venancio, one of just a few master mola makers in the San Blas. We’d been told to keep an eye out for him, and were surprised to see him so far east.  Venancio told us that he makes the eight hour round trip to the eastern Holandes from the island where he lives, just once a week, so we were lucky to catch him. 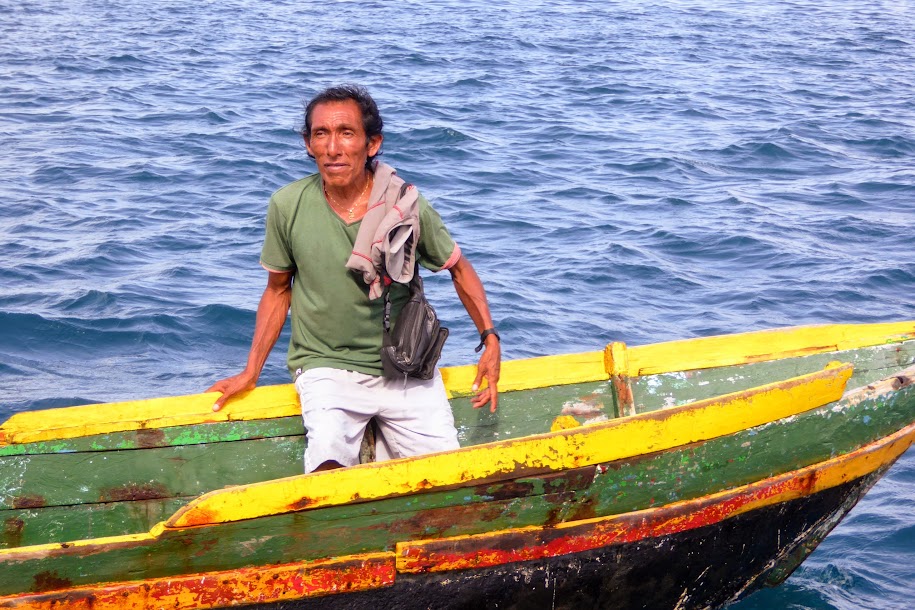 Venancio came aboard with a trash can full of molas, and some beaded bracelets. He took each mola out, and explained it’s design as he laid them out for us to see. They were beautiful; full of color, and all hand stitched. 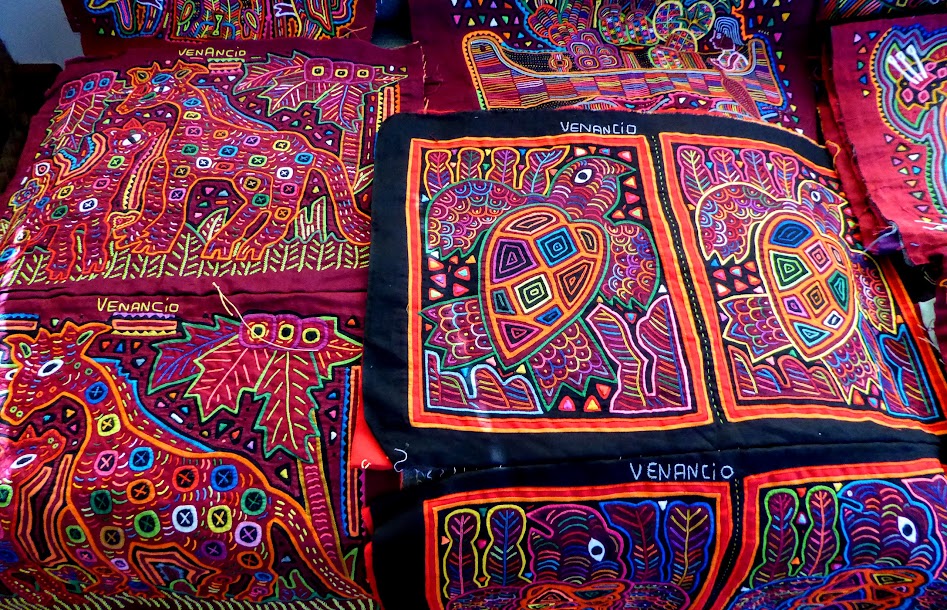 We chose several of our favorites, and then Venancio packed up his trash can, loaded it aboard the ulu (wooden canoe) and covered it well, protecting the molas from the salt air and spray.  Mola purchase in San Blas..check. 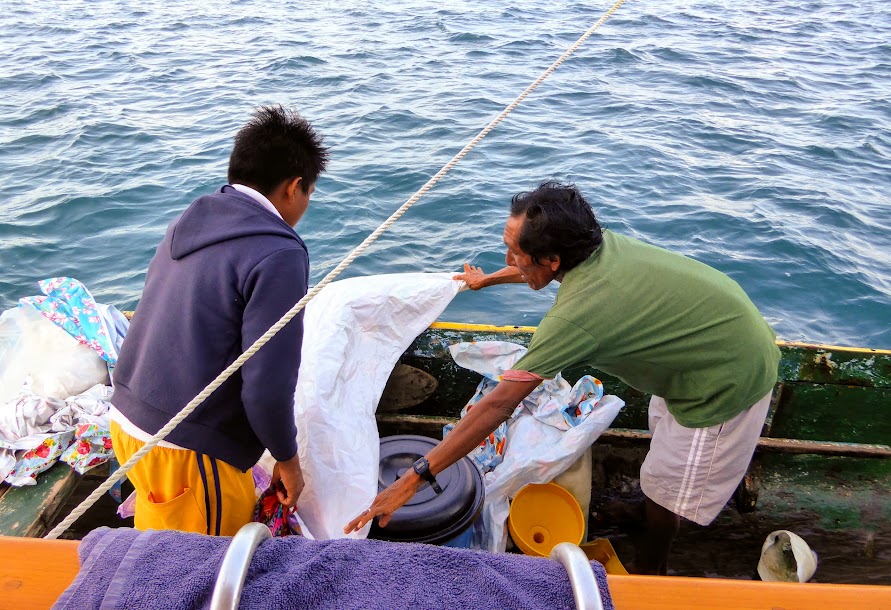 The week before Christmas, we heard a general announcement on the vhf that there was going to be a cruiser gathering on Barbecue Island, located at the front of the anchorage, just behind the reef. We were excited to meet the other cruisers in the anchorage, and arrived with an appetizer to share with the group. The weather was perfect, and we met many new friends. (photo courtesy of s/v Sundowner) 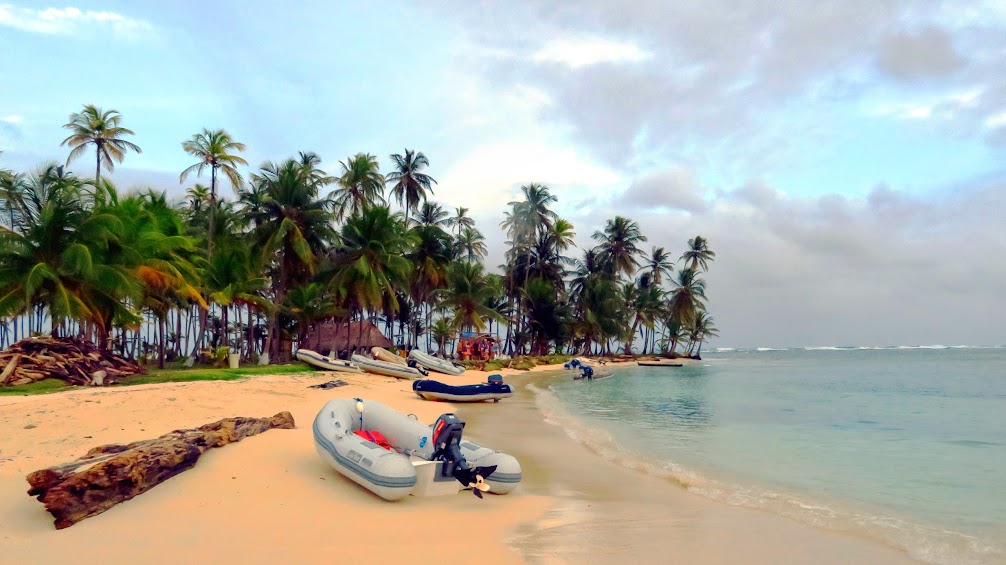 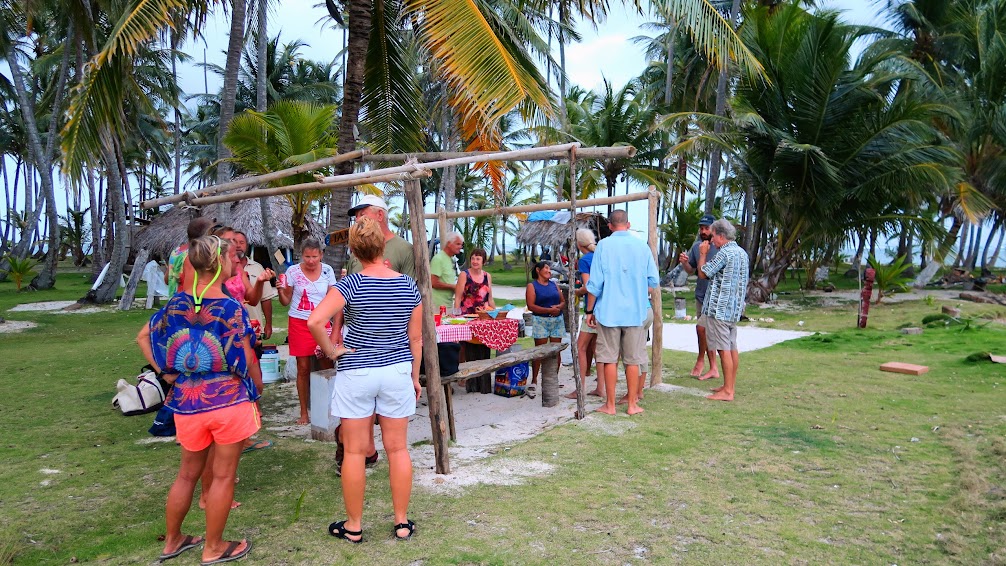 Once the sun set, locals on the island, who run a small “resort” (I use that term very loosely) lit a bonfire for us. Their fire starting was far from skilled, as we watched them spray the huge pile of wood and palm fronds with gasoline! (photo courtesy of s/v Sundowner) 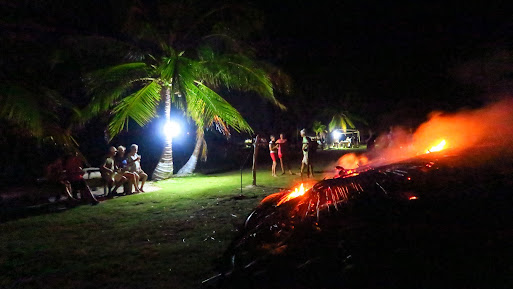 As expected, Scott spent many hours in the Aluminum Princess, exploring the anchorage and the area around the expansive reef. 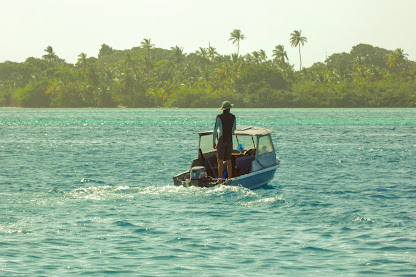 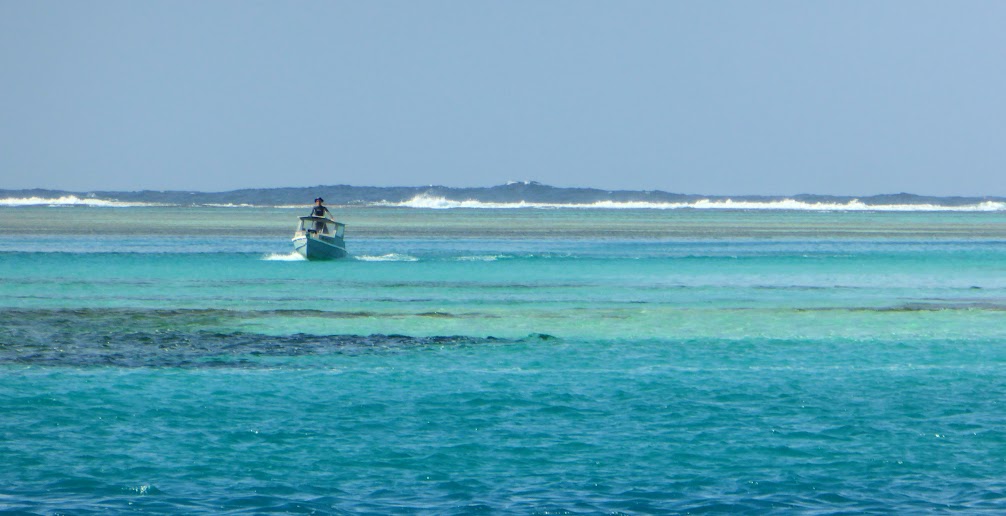 He always has his pole spear handy, as his snorkeling outing often turn into hunting expeditions…many times successful ones! 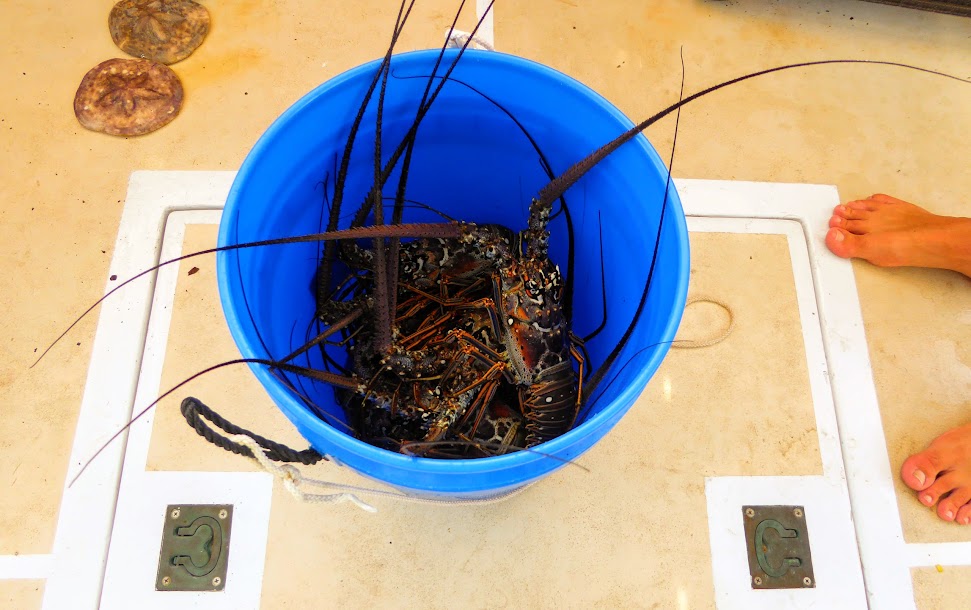 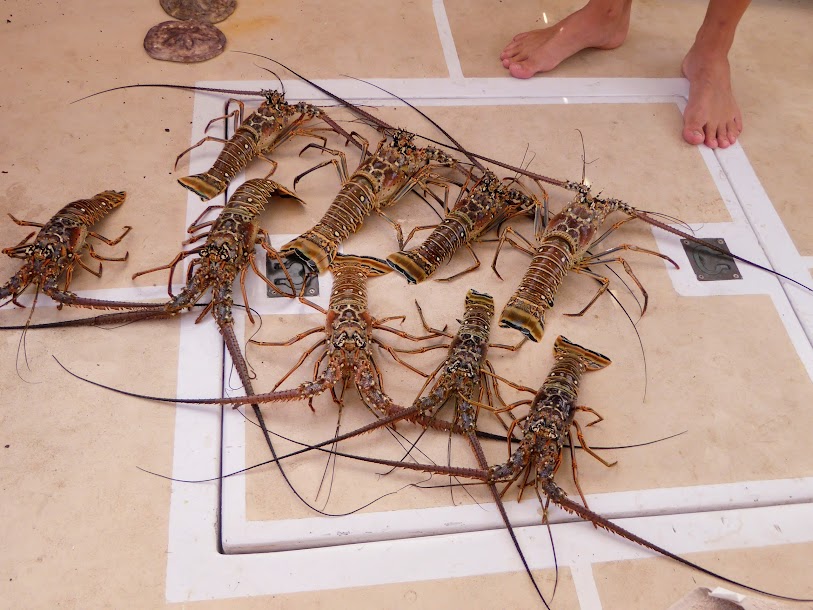 Scott dropped a lobster head into the water behind the boat, to see what might bite. It seems that Triggerfish find them pretty tasty. Regulars here in the San Blas refer to Triggerfish as “Bob.” Maybe because there are many in the waters here…not sure. Bob likes lobster. 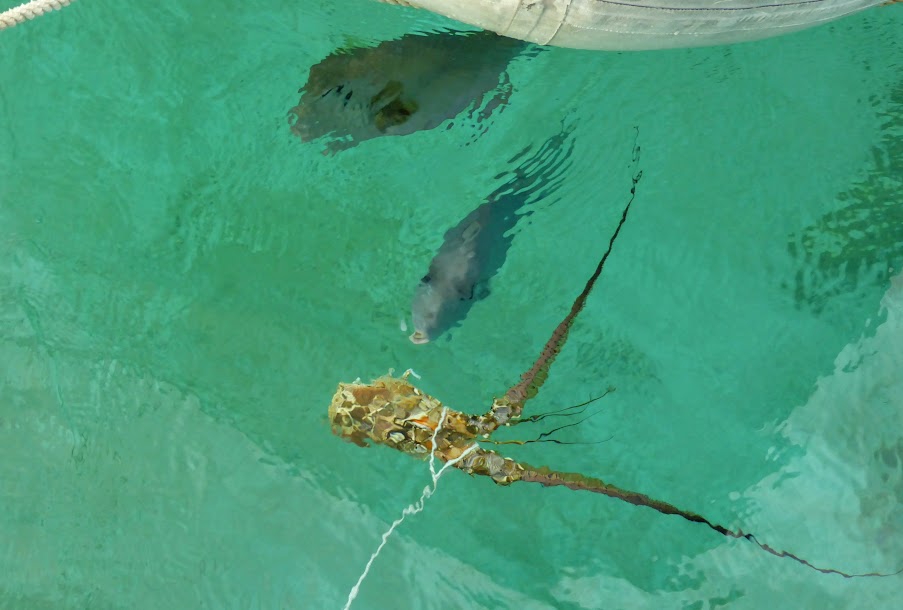 He  caught quite a few very large conch like this, having just enough time to get to the bottom and grab them before being pulled along. Neither of us were up for the job of cleaning conch (eewww), so we shared them with some of our new friends in the anchorage…and joined them for some fresh ceviche as a thank you!

We would get regular visits from the Gunas, in their ulas (dugout canoes). They usually had molas and jewelry for sale. We already had more molas than needed, but were happy to fill their water jugs with fresh water, and occasionally a juice for small children. They also took our aluminum cans, to sell to the Colombian trader boats who recycle them.They both row and sail the ulas, and the women’s traditional dress is beautiful. 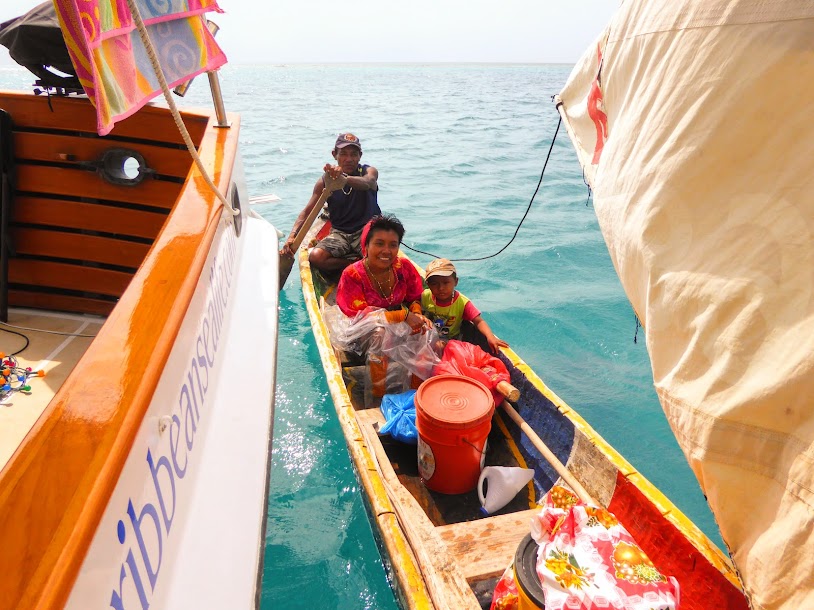 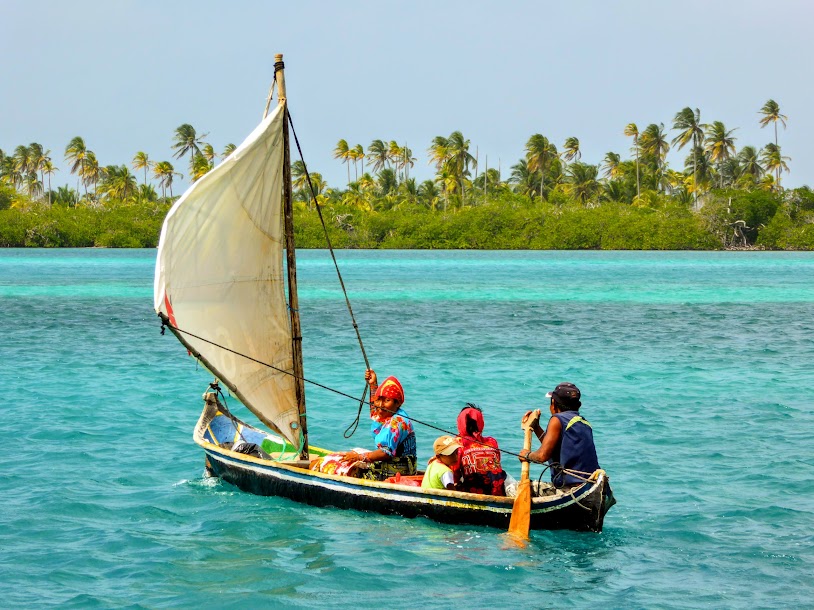 There is no trash removal service here in the San Blas. Bottles are broken into pieces (the theory is that the pieces will eventually turn into sea glass) and dropped overboard when in deep water (at least 150 feet), along with steel cans (anything that will rust away). This isn’t just practice reserved for the San Blas islands, the U.S Coast Guard has similar requirements for trash removal offshore.

All other trash here is burned. Being new to the San Blas, we weren’t sure which beaches were acceptable for this, as all of the islands here are owned by Guna families, whether they are inhabited or not. Until we learned the rules of trash burning etiquette, Scott improvised.

Channeling his inner “MacGyver,” Scott fashioned a rack from a wire coat hanger (I’m shocked that we had one on board, although he probably had it squirreled away for just such an occasion),and placed it in the bottom of an old varnish can. He punched holes in the bottom for air, and voila!, a burn can for the grill was born. 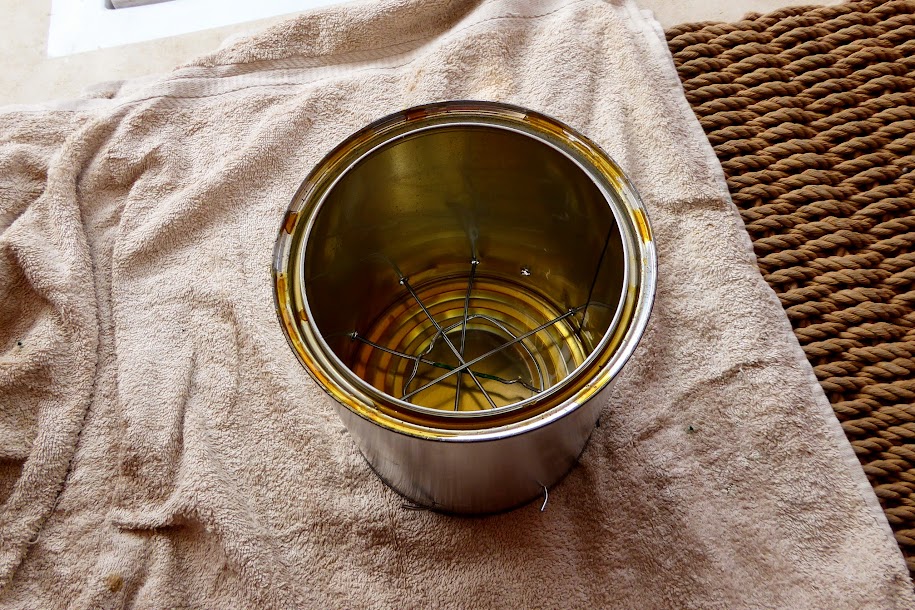 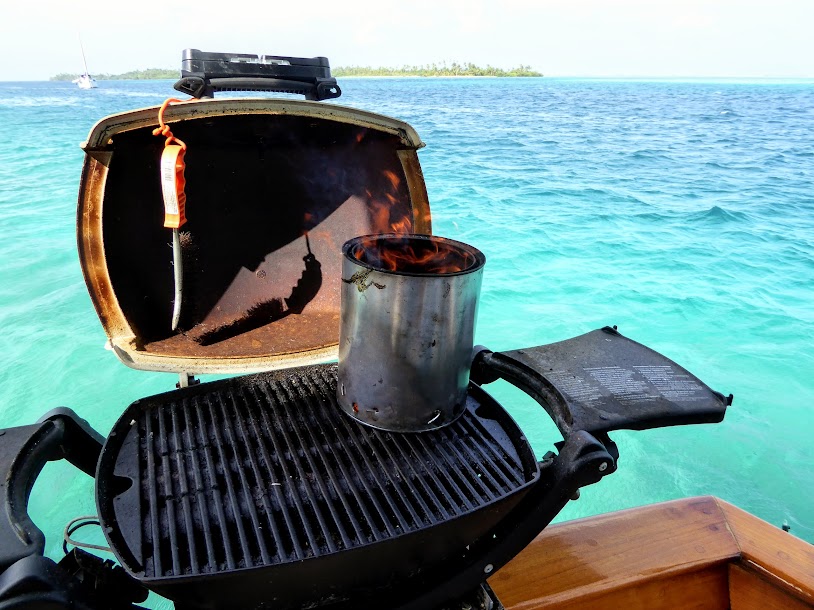 This would have been the perfect solution if we burned every day, or made less trash, but we do neither of these things. Instead, Scott would spent two hours or more burning everything from paper to an old pair of shorts.

Positive…our trash burned down to a tiny pile of  ash. Negatives..it took hours, and we had to close up the saloon, to avoid being choked out from the smoke.

Luckily, or new-found cruiser friends invited us to join them for a trash burn run. We followed them about 20 minutes from the pool, to a beautiful spot, where they meet to burn trash. Fires are made near the waterline, so that high tide will wash away the leftover ash. 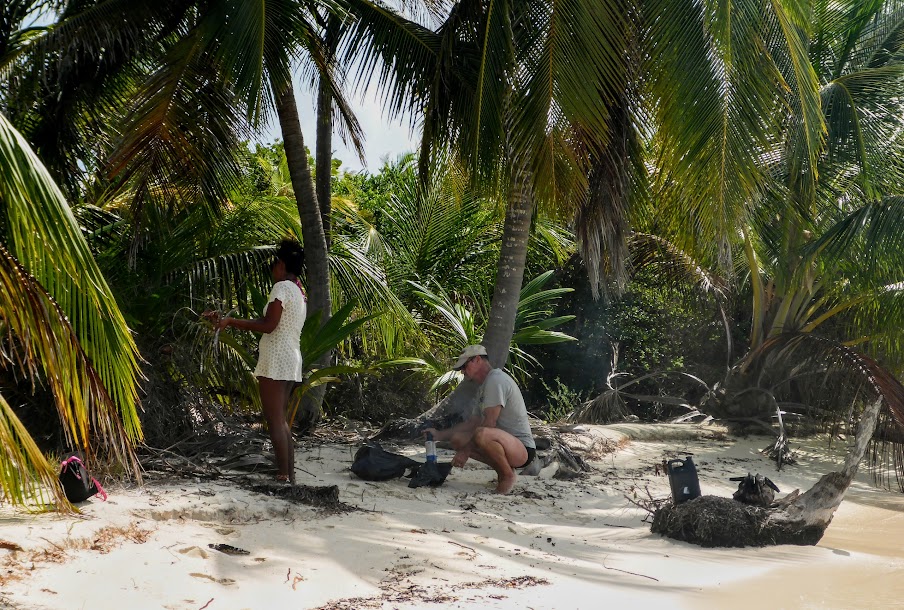 We soon realized that trash burning here is a social event. Once the trash has burned, and while we wait for the ashes to smolder and cool, it’s time for bobbing with drinks in the clear blue water; now that’s my idea of a day’s work! 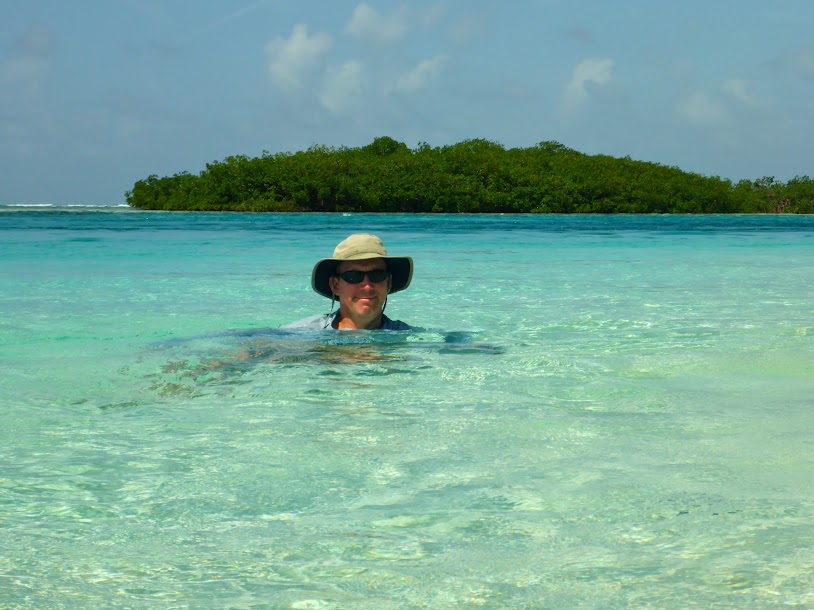 By the way, wearing some kind of shirt is a must in the water here  (unless you’re our friend, Sharda, who is blessed with skin from Trinidad!). I learned this the hard way, frying my shoulders and back from the reflection of the hot sun off of the water. 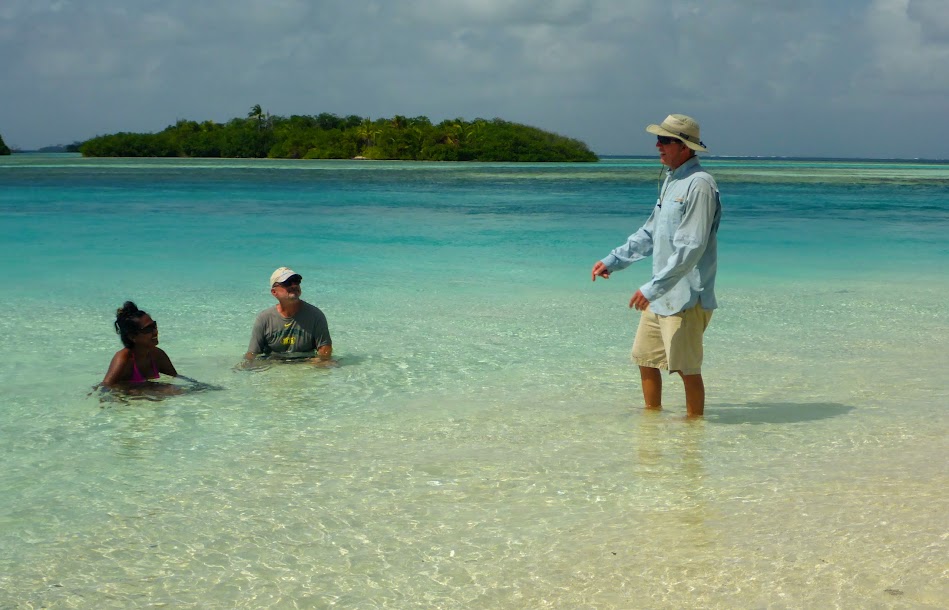 When we first arrived, there were few boats in the anchorage  here, but during  the weeks of Christmas and New Year’s Eve. the numbers grew. 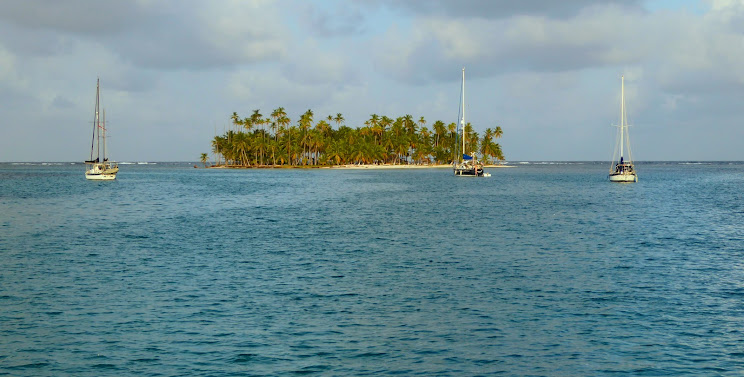 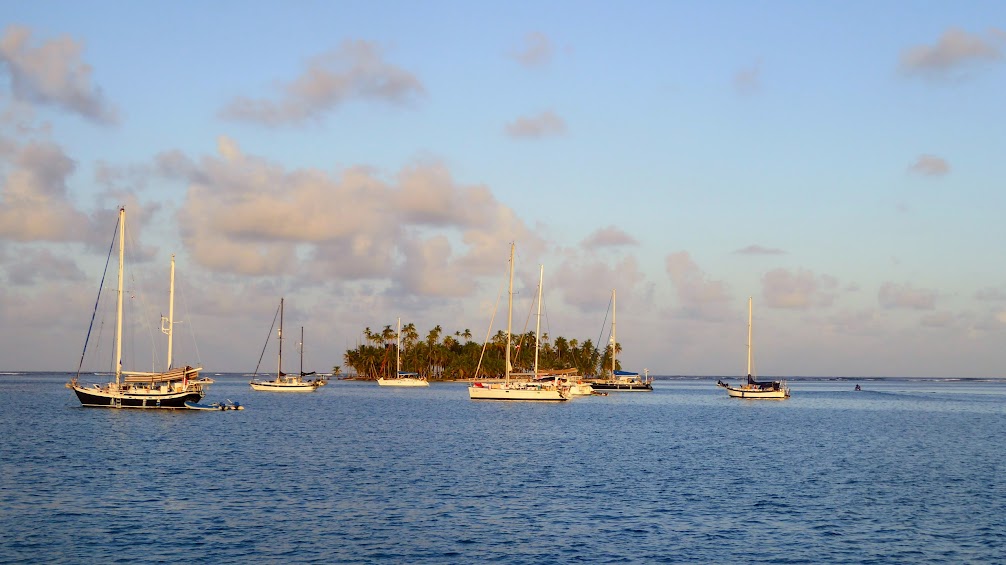 We enjoyed Christmas Day in two shifts. First, with dinner aboard s/v Sirena, and then dessert with friends on s/v Gris Gris. And of course, Christmas would not be complete without lights! We lugged along our holiday lights, and Sea Life was quite a festive sight in the anchorage (photo courtesy of s/v Sundowner). 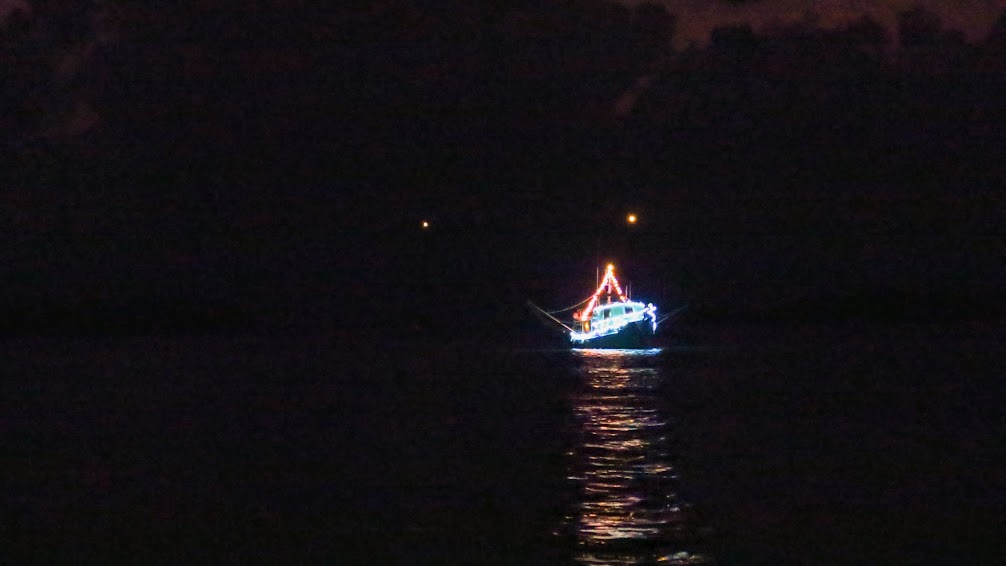 Knowing no boat offered enough room for a group to gather for New Year’s Eve., I put out the word for all cruisers interested to gather on a nearby beach, to ring in 2017. As luck would have it, the location was in perfect view of a fireworks display, set off by a nearby superyacht for their charter guests.

After enduring a stretch of windy weather in the pool, with the accompanying currents and insane salt spray, we decided to change locations for the next go-round. After the new year, we headed around the corner to the Hot Tub (yes, from the pool, to the hot tub..tough times).

With more protection from the winds, the water in “the tub” is much calmer, and the current much less strong. In addition to more beautiful views, the water is supposed to be warmer than in the pool, hence the name. However, we found it to be much cooler…ahhhh, refreshing. 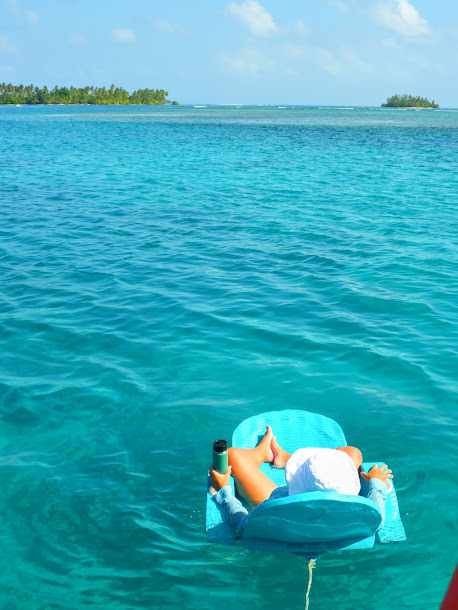 Scott found a great honey hole around the corner, for catching lobster and Lionfish. They are invasive, so he tries to kill them whenever he can. Lionfish are also good eating, but challenging to clean, due to their poisonous dorsal fins.

Once again, Scott used lobster tails for bait, and attracted a huge Bob! He grabbed his pole spear, and shot it right from the cockpit, without even getting wet. Unfortunately, Big Bob did not go down without a fight, flopping and bleeding all over the cockpit when Scott removed the spear tip. 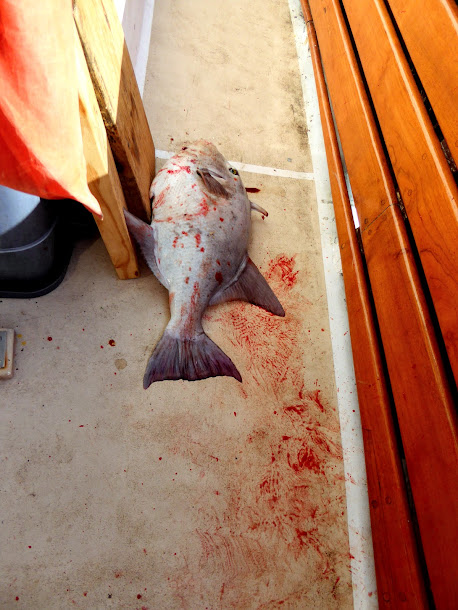 Scott delivered this massive fish to our friends, Jon and Shannon, on s/v Prism. They were waiting for a new dinghy motor, requiring them to row everywhere.

In case you’re wondering, Howard is enjoying life in the San Blas. He keeps an eye on us from one of his favorite perches, up under the solar panels, and loves when the fish light goes in the water each night. 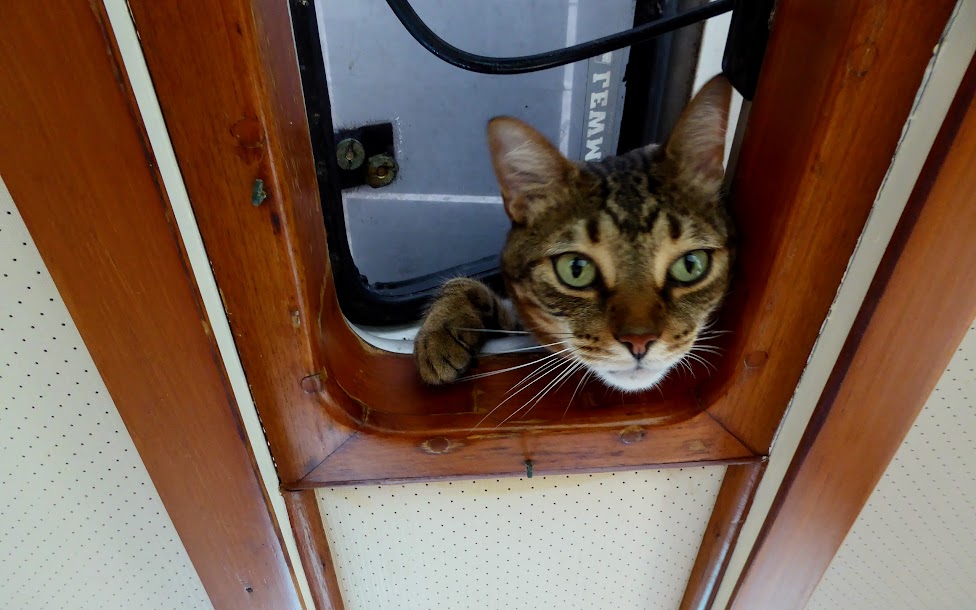 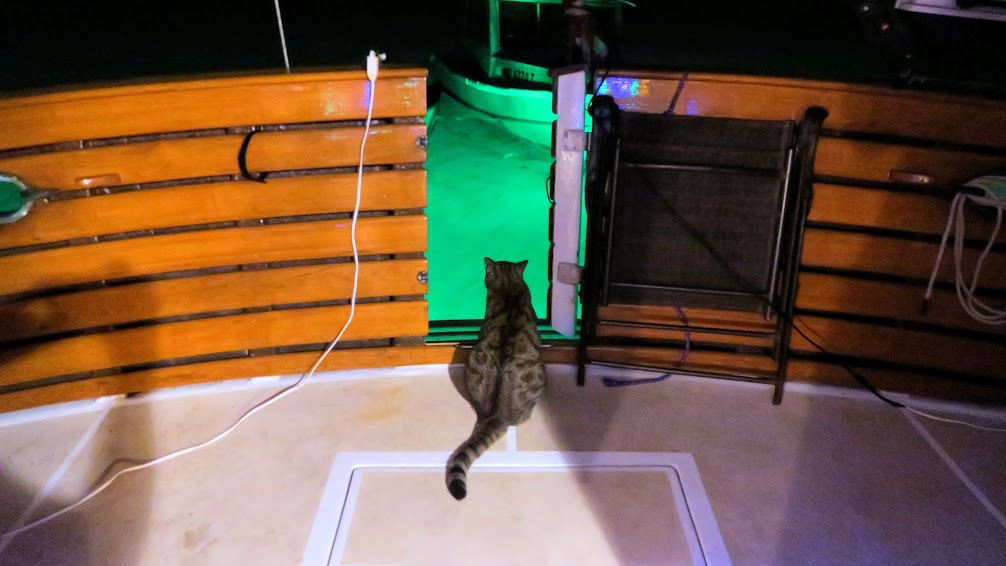 So our first few weeks in the San Blas were off to a great start. We made many new friends, and enjoyed the beautiful views. More to come, as we explore new anchorages. Here are more photos. 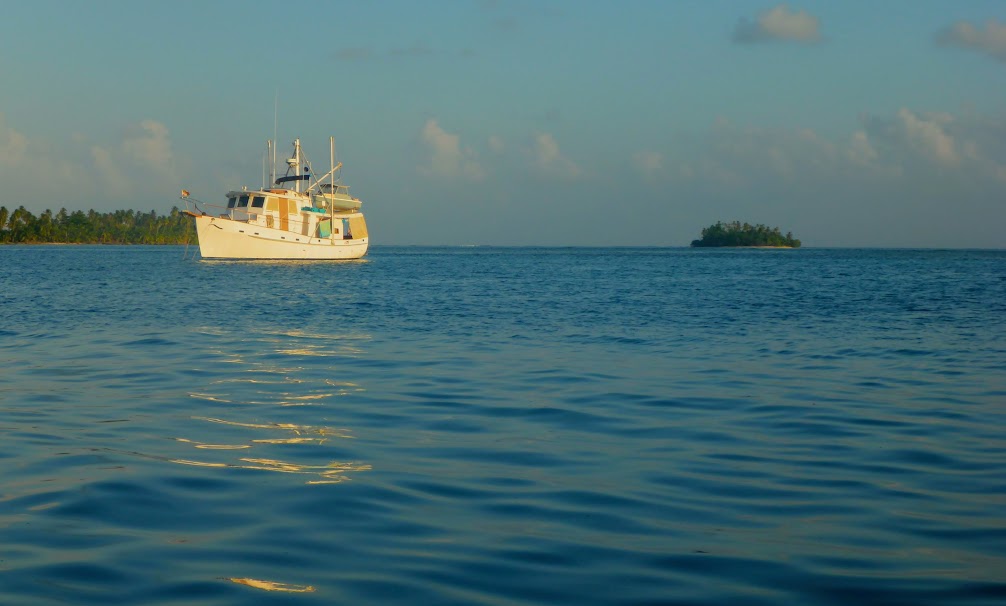