I have much to catch up on, but for now, a current update…..we arrived in Grenada a week ago, and Tropical Storm Don is our welcome wagon. Here’s a photo of Don’s predicted path. We are the bottom-most island/dot, in the yellowish-brown, with a 50-60% change of winds over 39 knots.

The storm is essentially passing right over us, with it’s specific path having very different results.

A tropical system spins counter-clockwise, with the top/north half having the most intensity.  Think of a pinwheel, sucking wind off in it as it spins. As the storm moves, that wind in the north half is given a extra boost, doubling it’s strength.

If Don passes just north of Grenada, we expect sustained winds in the 25-30 knot range,  clocking around in every direction. However, if the storm tracks a bit south, we’ll get more direct winds, sustained closer to 45 knots….possibly as high as 60 knots.

None of this is life threatening, and we are preparing for maximum winds, just to be safe. Unfortunately, there are not completely protected anchorages or marinas here in Grenada, so we’re just gonna have to ride it out with fingers crossed.

We are currently in Prickly Bay, on Grenada’s south side. Many cruisers come to Grenada for hurricane season, so the bays are crowded with boats. 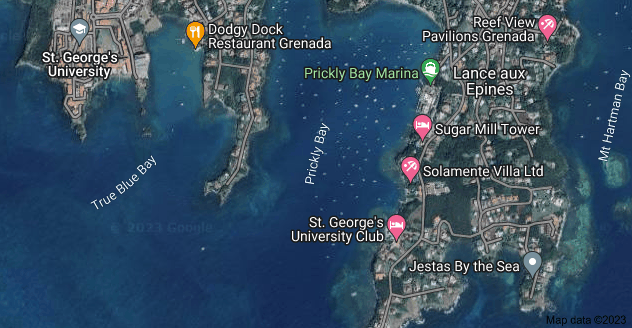 Our plan was to anchor, but we arrived to find that the marina here had filled most of the bay with mooring balls. Prickly Bay is safer than most, as far as local crime, so we chose to stay and take a ball. For those who may not know, a mooring ball is anchored to the bottom with a metal shackle. From there, a line travels up to the surface with a float/ball that you attach a line to.

On the positive side, balls are usually well spaced, and there’s no worry about boats with little anchoring experience breaking loose and dragging. The downside is that you’re never sure what condition the balls are in; whether the lines are still strong and the shackles are good. Several boats here have broken from their mooring here, drifting through the anchorage, one as recently as four days ago.

Our quandary is whether to stay here on the ball, and risk it breaking, or having other moorings break, and those boats drifting our way. Or, head for another bay that is just as full, and risk anchors dragging (instead of moorings breaking) and boats drifting. We considered going to a marina, but they aren’t much more protected from heavy wind, and Scott’s concerned about being tied down and not able to swing with the winds, or cut and run if needed.

Here is Don’s timeline…..Murphy’s Cruising Law: Bad shit almost always happens at night! (we are between the blue line, and the S to the right…roughly 10pm-midnight)

So, we’re hunkering down here in Prickly Bay, and hopeful that Don gives us a gentle welcome to Grenada.