With Tropical Storm Don predicted to make a direct hit on Grenada, we prepared for 60 knot winds (always prepare for the worst). Scott secured loose things on the flybridge, stripped the canvas off of our bimini (canvas that shades the flybridge driving station), took the window covers off, removed our flags and stowed our extra solar panels (more on those later).

He tied an additional line to the mooring ball; readied our anchors in case we needed to drop them; put our large fenders in the cockpit, making them available in case another boat broke from it’s mooring and drug toward us; brought in our flopper-stoppers (large plates that hang from the paravanes, and reduce rolling at anchor…greatly reduce); and raised the paravanes, to reduced risk of another boat hitting them, making us more maneuverable through the anchorage should we need to move in a hurry.

While we were preparing the boat, the island of Grenada was preparing as well. One of the local radio stations broadcasted storm preparation information, and we heard the local Red Cross and Coast Guard making contact with each other over the vhf radio.

Businesses were required to close at 3pm, and we were very surprised to hear that public water and sewer were to be turned off at 7pm! Here’s a posting from the National Water and Sewerage Authority, with some interesting information:

ADVISORY – NAWASA TO SWITCH OFF ALL WATER SYSTEMS ON TUESDAY JULY 18TH, 2017

The National Water and Sewerage Authority (NAWASA) wishes to advise the general public that following a meeting of its Disaster Preparedness Committee, the following decisions were made:

– ALL WATER SYSTEMS will be switched off later this evening. A timeline will be provided once an update on Tropical Storm DON is received from NaDMA.

– Once our systems are switched off, consumers island wide will have their service interrupted WITHOUT A DEFINED RESTORATION TIME.

– An analysis of ALL water systems will be conducted by our engineering team on Wednesday July 19th and restoration will commence thereafter.

The Authority implores on the general public the need to:

• Collect and store water in clean, non-corrosive and mostly tightly covered containers both in and out of your refrigerator. To increase shelf life of water, group bottles in dark plastic trash bags to keep light out.

• Shut off water tanks and individual property connections. Your water can be shut off at either the outlet valve or the water meter. Everyone in your home should know where these are located.

NAWASA apologises for the inconveniences likely to be caused by this decision, but advises that this precautionary measure is necessary to safe guard our infrastructure and is in the best interest of the consumers we serve.

When our preparations were complete, we spent the rest of the day checking various online sites for updates on Don, and just waited, along with everyone else in the bay. Scott had a pre-Don cocktail, and Howard kept watch for fish. 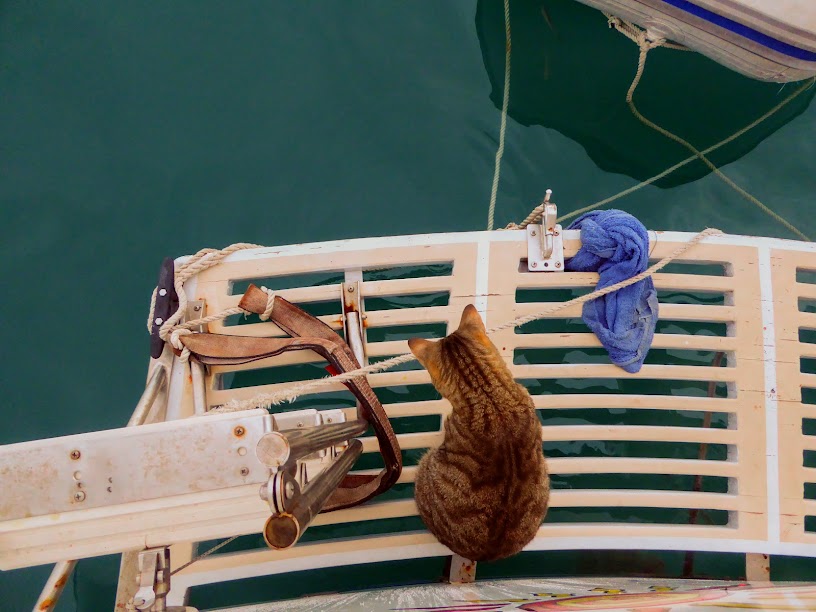 Watching for fish can be tiring. Sometimes  you have to lay down on the job. 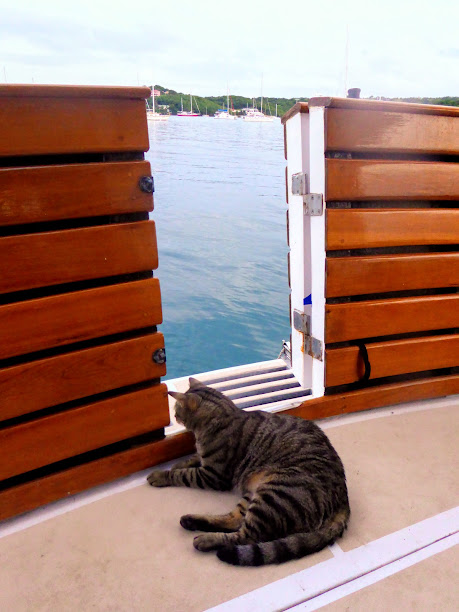 We were getting reports that Don was speeding up, but the eye was collapsing, and that wind speed predictions had dropped a bit; all good news.

As the day wore on, the winds died completely, and by early evening the bay was lake-like.  We watched the barometer drop on our weather station, and considered this the calm before the storm. The bay was noticeably less crowded, as many chose to hunker down in marinas or other island locations.

By sunset, Don was predicted to only cause us an hour’s worth of havoc, and at a much lower intensity. We began to get a decent swell coming into the bay, and readied for our 60 minutes of storm drama.

Instead, Don fell apart as it passed twenty miles south of us. We watched the radar updates online, and by 10 or 11pm, the storm, now reduced to a tropical wave, had officially passed us by without incident.There had been no wind to speak of, and we only received a quarter inch of rain.

The incoming swell lingered on though, and we continued to roll around for hours. Rolling back and forth (actually, Sea Life tends to lumber back and forth, as opposed to rolling) wasn’t as irritating as the noise from one of our paravane cables rubbing along a mast wire; the metal scraping sound was maddening. Realizing that Don was now a non-event, Scott lowered our paravanes and put the floppers back in the water….ahhhh.

So, Don fizzled out, thank goodness, and we dodged a tropical bullet. I’d like to believe that this was our one and only scare for the season, but we’ve learned all too well on this journey that Mother Nature is fickle.

5 thoughts on “Hey Don, Thanks For Going Easy On Us!”