Our passage to Panama was, in a word, terrific! We raised anchor at 7am, and followed both the way points and our track coming into the Albuquerques, traveling right through the reef, stress-free this time.

(If you were following our track on the Delorme link, the Albuquerque Cays are not visible on Google Earth, so it appeared that we were just dead in the water for five days or so. Our zig-zag track leading to it was our path through the coral.)

Scott estimated that the trip would take 28-30 hours, based on us traveling at an average speed of 6 knots. We actually averaged closer to 7 knots, and spent much of the trip at 7.1 and 7.2, with the current in our favor for a change. Considering that our paravanes cost us a half knot of speed when they’re in the water, traveling 7+ knots was fantastic!

The winds were at 13-15 knots as we left, and they dropped to nothing by the late afternoon; the seas followed suit. For much of the late afternoon and evening, our wind gauge read 0, a beautiful sight. Our trip went so smoothly that I was able to catch a nap in our bed, versus the couch. Howard got restful sleep, and was alert and mobile later, begging us for food. 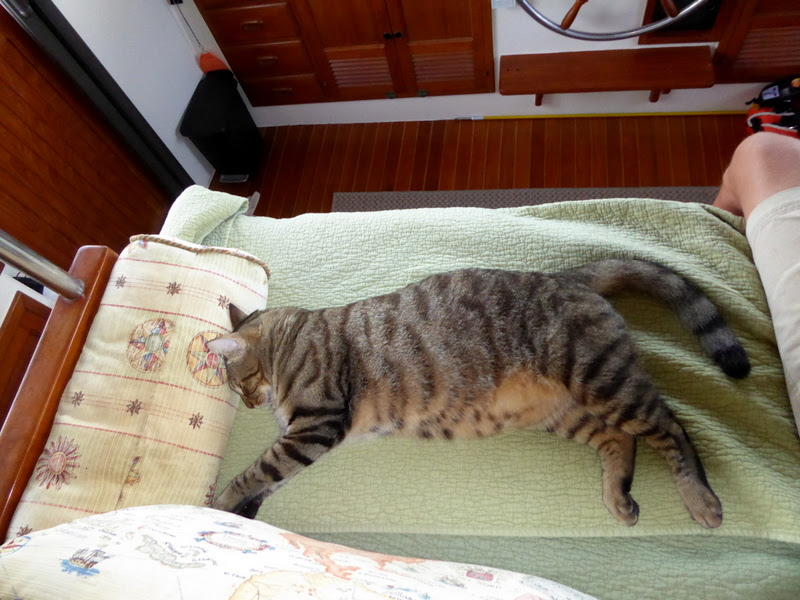 Scott put his lines in the water, with fingers crossed that we’d catch something to fill the freezer with. Almost immediately, one of the lines began to whiz. It was a sizeable sailfish, that we weren’t interested in eating or taking the time to catch. However, that fish had our lure, so Scott began to reel him in. Unfortunately, the line snapped and the sailfish swam of….with our lure. Skunked again.

Just after dawn the next morning, the coastline of Panama came into view.

As the sun rose and we came closer to the coastline, the air smelled clean and fresh coming off of the mountains, similar to the awesome pine smell that greeted us in Guanaja. 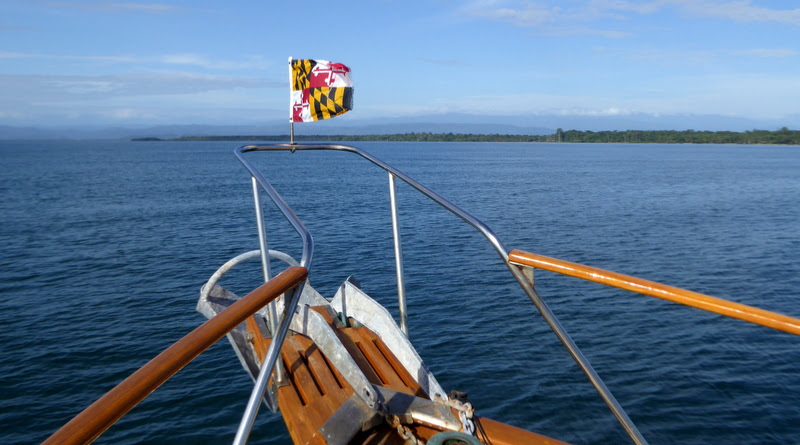 As we approached the Bay of Almirante, several small hotels appeared along the shoreline. A large barge replacing navigational buoys passed by us, and those things are much bigger out of the water. We took turns venturing out onto the bow, admiring the coastline, breathing in the terrific smelling air and enjoying the sunshine. 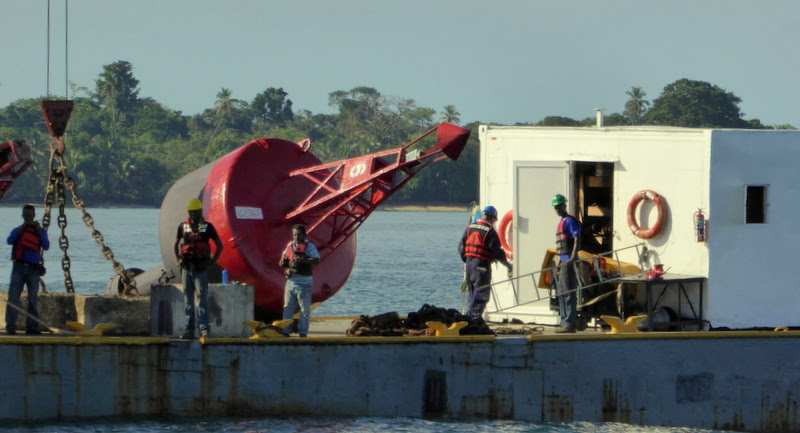 We couldn’t stop looking at the mountains, with their peaks disappearing in the clouds. Later, Scott realized that the lower hills are in Panama, and the higher ones we were seeing are actually in Costa Rica, as the country’s border is very close.

Once inside the bay, the water turned glassy calm. 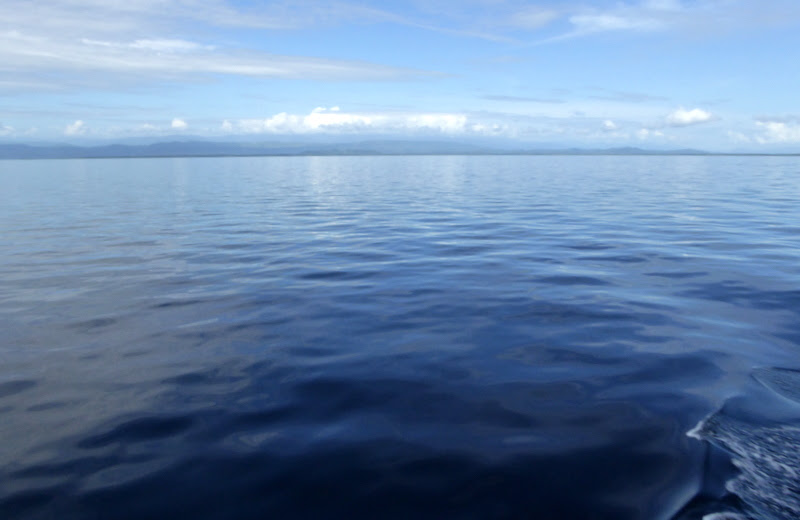 The color here was more green and didn’t appear to be too clear, until we saw two dolphins headed our way. As they approached the boat and dove down, we could clearly see them at least 20 feet down. We expected them to hang around our bow for a bit, but they went right by us, and I thought they’d gone. I turned to see them doing Sea World-type flips some distance behind us, and wished I hadn’t left my camera inside.

Soon Isla Colon, and Bocas Town, came into sight. Our marina is off of the west end of Boca Town, so we had to make our way around to the other side of the island.

By this time, Howard was more than ready to be there. 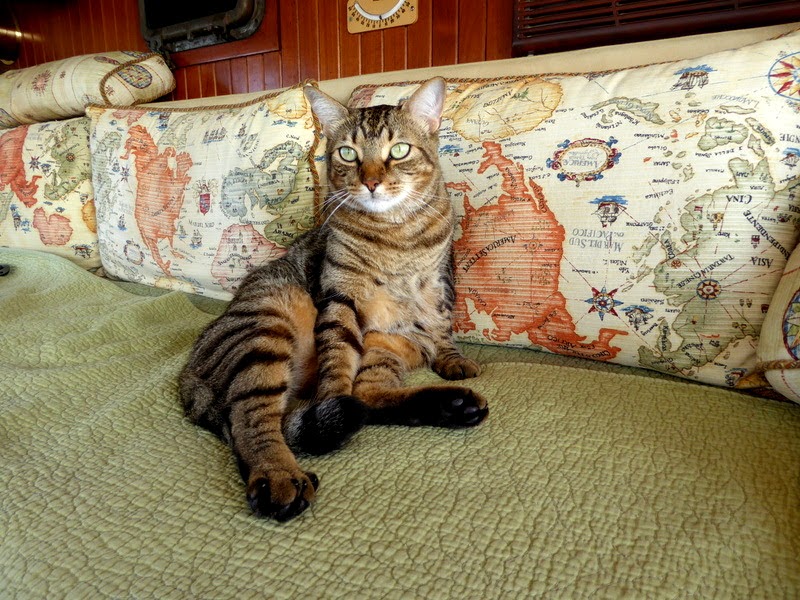 An hour or so later we made our final turn, taking us past more of Bocas Town, and heading toward Bocas Marina. 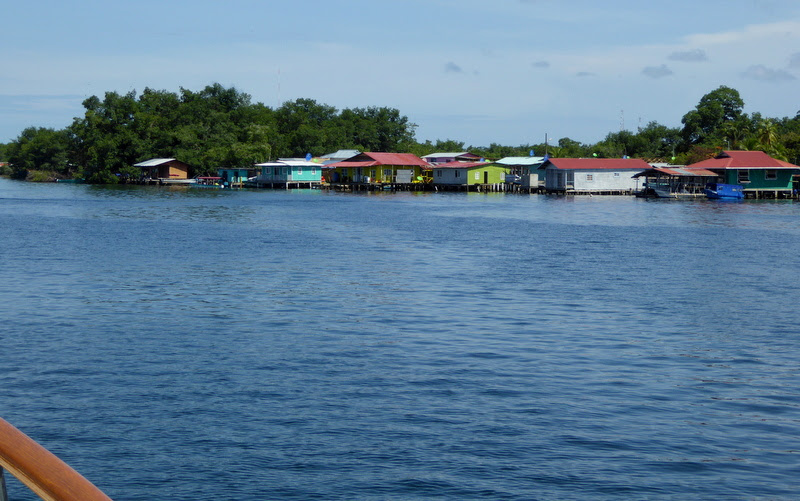 Panama was our destination for hurricane season this year, and the goal for end of year one. The original plan was to be here in Bocas del Toro by late June, and make our way toward the Eastern Caribbean in late October.

After being delayed so long in getting here, and not wanting to rush through the country. we’ve decided to linger here until spring. We’ll stay in Bocas del Toro until mid-November, and then move on to explore more of the eastern coast, and the San Blas Islands (sorry, so canal crossing for us). Here are more photos of our final leg to Panama.

2 thoughts on “Our Final Push To Panama”