The country of Panama is an isthmus (a narrow strip of land with sea on either side, forming a link between two larger areas of land), bordered by the Caribbean Sea to the north and the Pacific Ocean to the south. Bocas del Toro is located at the northwest end of Panama, near the border of Costa Rico.

Bocas del Toro Province is made up of an island chain off the Caribbean coast, and a section of nearby mainland. The archipelago separates Almirante Bay from the Caribbean Sea, and is made up of 10 islands. It was originally dubbed “the Galapagos of Panama” for its scores of biologically unique islands and islets. Our marina is on the main island of Isla Colon, where the capital, Bcocas Town is also located. The archipelago also includes 50 cays and some 200 tiny islets. 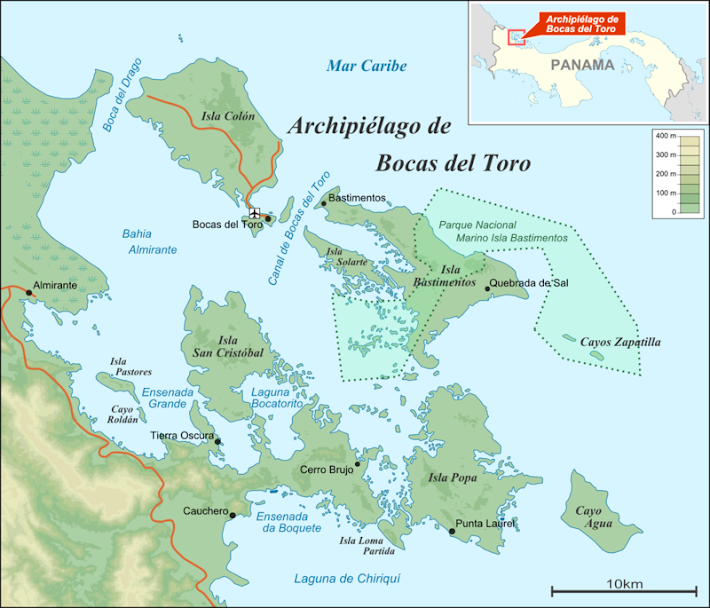 Not surprisingly, during the 17th century, the archipelago became a haven for pirates. They repaired ships on the islands, built others with wood from the forests and fed upon the many sea turtles in the area.

Gold was not plentiful in Bocas del Toro, so the Spaniards did not colonize the region with the same ruthlessness that was seen in other parts of Panama and the Caribbean.

From the 16th century to the mid-1800s, Bocas was little more than an uncharted frontier. Blazing sun, torrential rain, floods, bugs, landslides, and a plenty of feverish diseases made it pretty inhospitable (hmmm, aside from the landslides and diseases, sounds pretty familiar to us!). Later on, a little fishing village settled where Bocas Town is today.

In 1899, the United Fruit Company planted itself in Bocas town and over the next century that followed, it established vast plantations that stretched across the entire peninsula. Based in Bocas del Toro, the company rapidly expanded through Central and South America, constructing elaborate networks of roads, bridges and canals as well as entire towns and cities to house their workers.

However, one by one, plantations began to fall to a mysterious and deadly infection. “Panama disease” was a fungus that incubated in the soil and spread by floodwaters. By the 1920s, the banana plantations had died out.

During World War II, the Japanese cut off the world’s supply of abaca, which is used to make Manila hemp, the raw fiber in rope. Unable to tie their warships, the U.S. government enlisted the United Fruit Compnay to grow abaca on an industrial scale, and  Bocas del Toro was suddenly booming again.

Today, United Fruit is part of Chiquita Brands (based in Cincinnati), and their workers in Bocas del Toro Province grow and export three-quarters of a million tons of bananas annually.

Alright, enough historical tidbits….Now that the Aluminum Princess was in the water, and we’d made a dent in the to-do list, it was time for some exploring. Our first run was an hour-long ride along the shoreline of Bocas Town, just before sunset. Restaurants, hotels and homes in all conditions are crammed together, many  built entirely over the water. 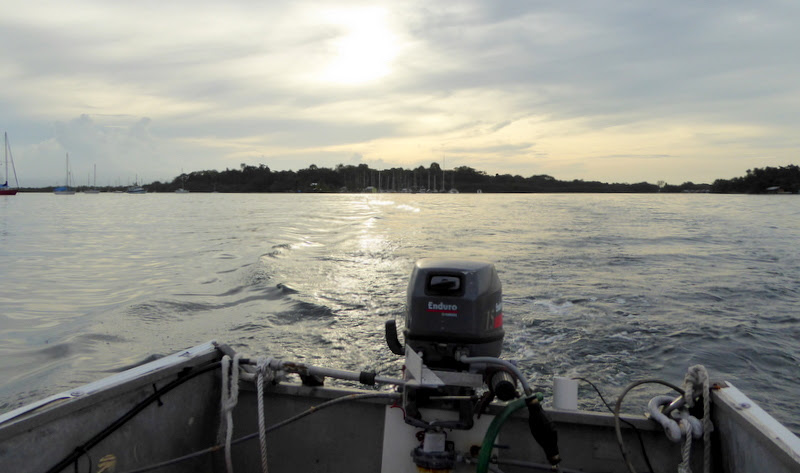 Carenero Island is just off of Isla Colon, and Bocas Town, so we took a spin past that shoreline next. 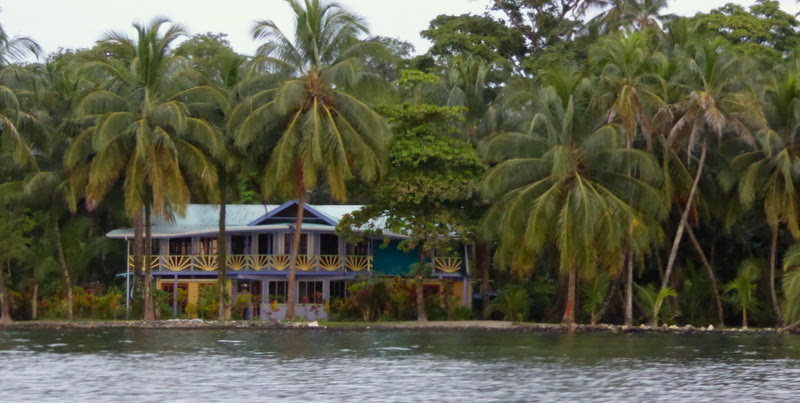 While perusing the piers of Marina Carenero (because Scott never tires of looking at boats), we noticed this interesting tenting over a boat having work done. It strapped right to the pier, providing a sturdy structure for the work being done inside. 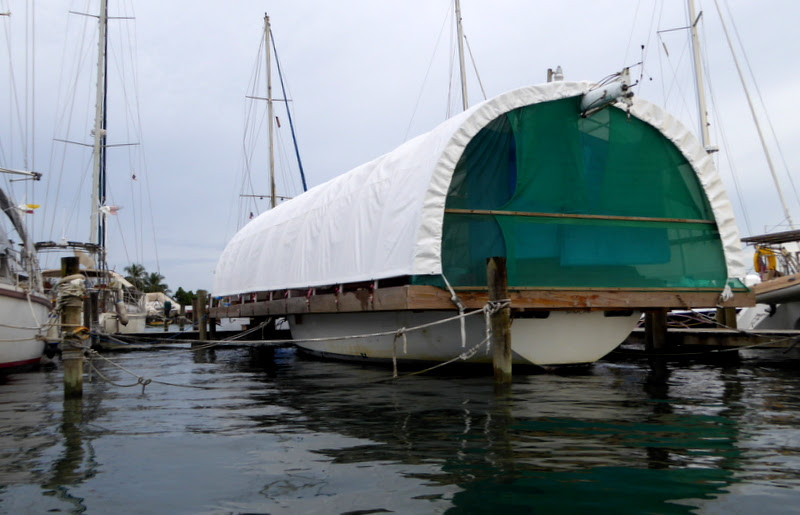 On the other side of the island, as we motored close to some over-water houses, Scott caught sight of a Maryland registration sticker on a small sailboat that has seen better days; neglected boats make him sad. 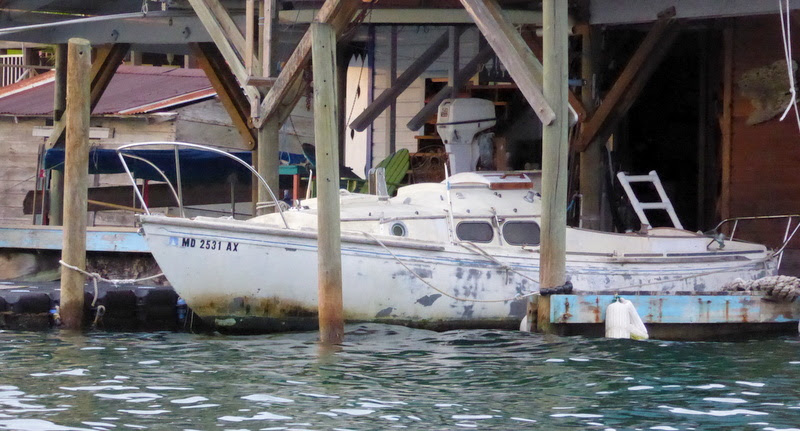 A few days later we took a longer ride, heading around the corner from the marina and over to the small settlement of Saigon, which backs up to the far side of Bocas Town. Most all of these houses sit over the water, in all shapes and sizes.

Next it was on to Starfish Beach. We actually didn’t see any starfish, just several interesting, low-key restaurants. We made a mental note for a future visit. 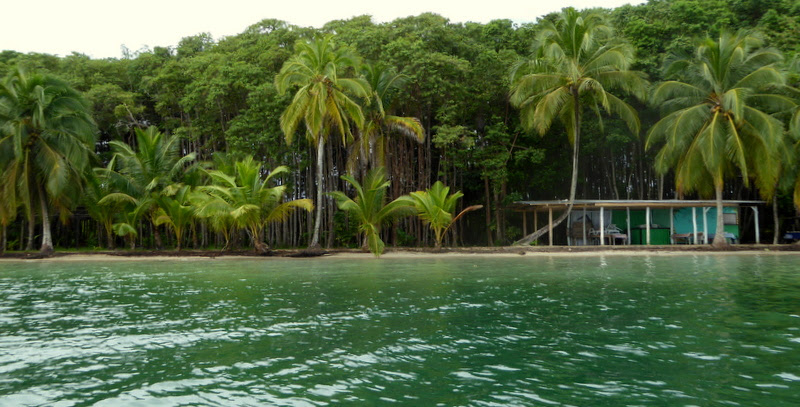 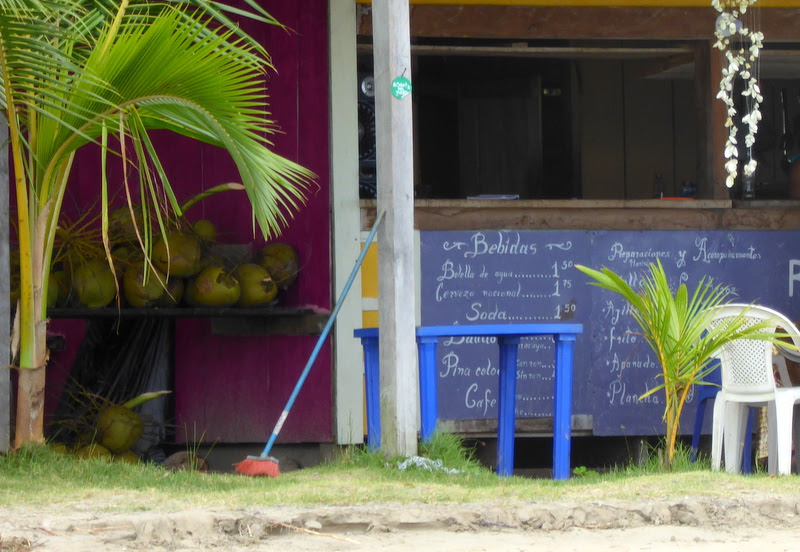 On our way back to the marina, we enjoyed views of the gorgeous clouds over the mountains of nearby Costa Rica. 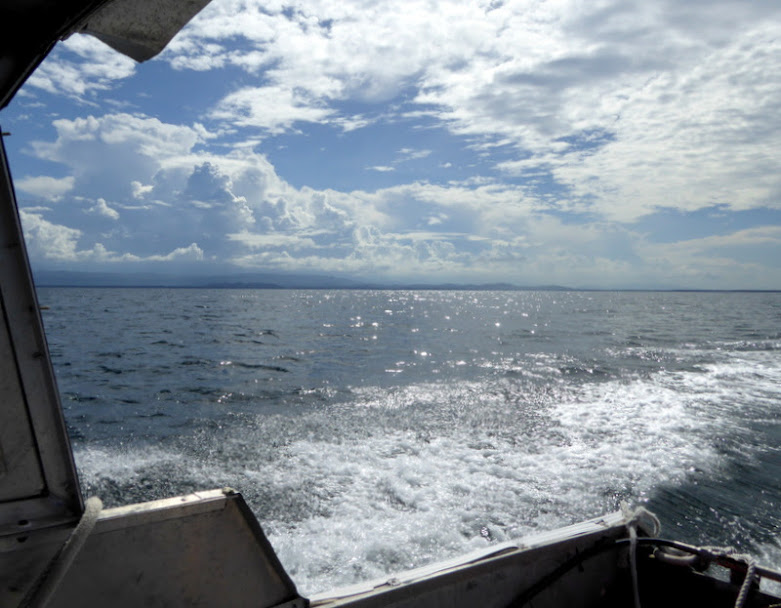 Scott was concerned about leaving the Aluminum Princess in the water for days at a time, and set about devising a way to allow the bottom to dry. His answer? Tie off the bow of the Aluminum Princess to Sea Life’s windlass, lifting it out of the water and up toward the pier. From there, Scott gave it a good heave, and hauled her out. It’s quite a sight, but it works. 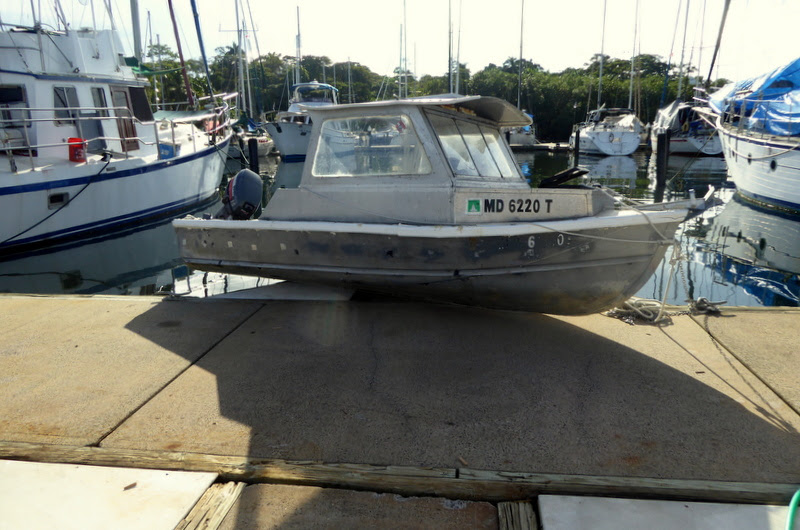 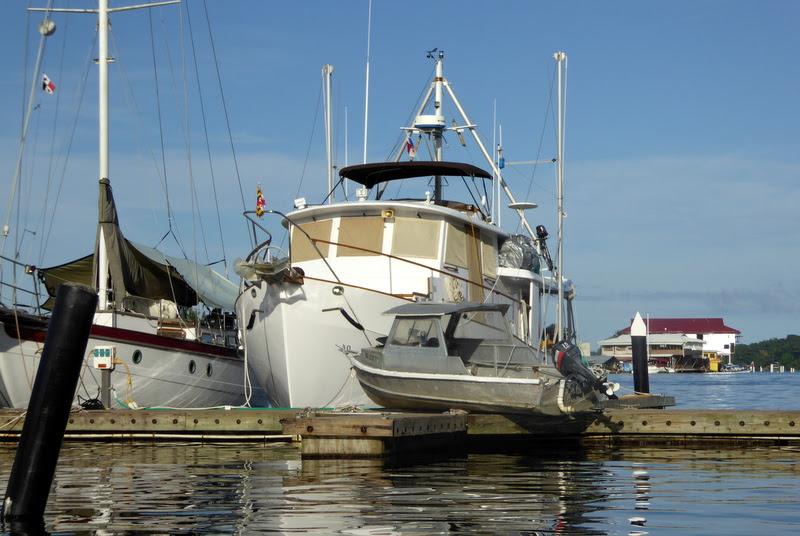 I’ll be traveling back to the U.S., for a five week stay. While I am visiting friends and family at home, Scott has plans for several day-long excursions in the area. Here are many more photos of our first days exploring the waters of Bocas del Toro.