After tying into our slip the marina staff promptly called the various officials to come clear us in, and we were told that it would be at least an hour before they arrived. However, just thirty minutes later, they were knocking on our door(Luckily, we managed to put fresh, dry clothes on. Tying up in the heat has us soaked through)!

Four officials boarded the boat, and representatives from the port captain’s office, immigration, customs and agriculture took a seat in our saloon. The port captain spoke the best (really, the only) English, and was primarily there to inform us as to what the rest needed.

He began by saying that they were offering us the “service” of coming out to our boat. Hmmm, “service.” The only two who actually needed to come on board were the customs and agriculture officials. We were still expected to visit the port captain and immigration offices to register the boat, so they saved us no time by coming aboard. It smelled of a way to get some extra cash (ie, a tip), but this didn’t surprise us and we weren’t up for arguing.

As soon as they were settled, Howard came to greet them. He jumped onto the table and right into the face of the woman from immigration, who was obviously not a cat person (why do animals always seem to sniff these people out??). She recoiled and froze, as if someone had thrown a rattlesnake in front of her. The men from customs and immigration, however, were fascinated with Howard, and tried to coax him closer for some petting. Of course, he wasn’t interested in them, only in agitating the immigration woman, who was already not a friendly person.

The port captain didn’t do anything while aboard but translate, which was definitely useful. For this, he handed us a receipt for $20.00; “overtime” service for coming to the boat. It was 11:30 am on a Monday, in who’s world is that overtime??

Madam Friendly stamped our passports, with a written expiration date of 48 hours. We were expected to see her at the immigration office within that time, to pay $105.00 each for 90 days in the country. So what exactly was the $25.00 service fee for??

She conveniently didn’t have a receipt on hand, for the $25.00 “fee.” The port captain relayed that we’d get the receipt at her office. This excuse seemed sketchy, but since we still had to deal with her, we held our tongues.

The agricultural official was hardly interested in the food we had onboard, unlike the close scrutiny we’d had in Mexico. He barely glanced in the refrigerator, waved off looking in the freezer (Scott’s biggest worry area), and briefly looked into one galley cabinet, before declaring us good.

This man was also responsible for clearing Howard. He watched Howard’s agitating antics toward Madam Friendly, and deemed him healthy and fine (maybe as an “atta boy!”). We were handed a receipt of his “services,” in the amount $35.00.

The customs agent was the most thorough, walking through the entire boat with Scott. He opened all drawers and closets, and inquired about liquor. Scott replied that we had “a few bottles” on board, and quickly shifted the man’s attention elsewhere. Unlike Mexico, where there was a thorough investigation of our engine room and motor, this man didn’t go below, or check any compartments under the floor. When through, he handed us a receipt for his $20.00 service.

So now we, Howard and the boat’s contents were cleared in, that just left the boat itself. We were now allowed to raise the Panamanian flag. 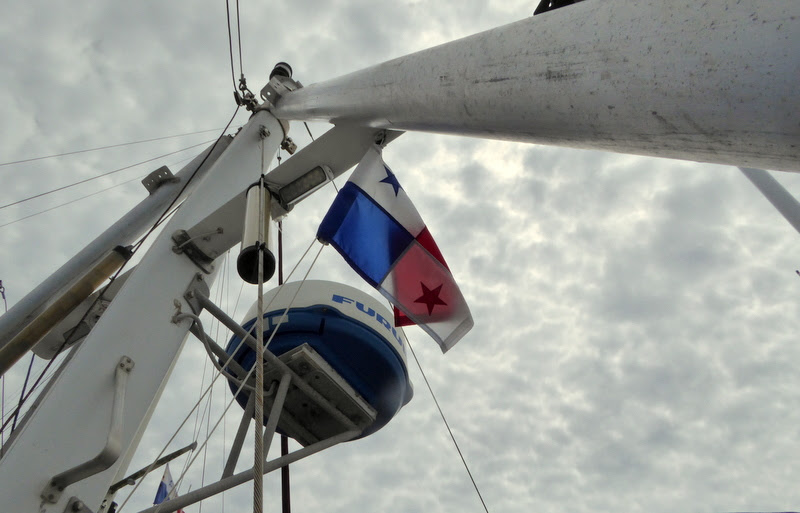 The next day, we headed to the port captain’s office in town, to register Sea Life. We dealt with a different port captain, who had us fill out the same form Scott had completed the day before..arrgh! The man was very friendly and helpful, as the two worked together to complete the form. The captain assisted Scott with filling in the Spanish blanks, and Scott helped him with the details of our boat information.

The subject of how to categorize our boat took some time, which seemed strange. As we travel farther south, most everyone assumes that we are on a sailboat. Sea Life is a powerboat, but  compared to those found in the U.S., she leans more toward a sailboat in speed and seaworthiness. However, the port captain didn’t know any of this, and seemed confused by us being on a powerboat, especially one that had come from so far away.

Scott  handed him our boat card, with a photo of Sea Life, thinking it would help. After much hemming and hawing, and discussion with others in the office, we were classified as a sailboat on some of the paper work, and a yacht on other areas. When all was said and done, we handed over $185.00 , and Sea Life was registered for one year.

Next, we made our way to the airport, in the pouring rain, to see Madame Friendly. The port captain had called ahead for us, to make sure that she’d be there, and not away for lunch. We were told that she was waiting, but when we arrived, soaked from our ten minute walk in the rain, she was leaving her office. Pointing to her watch, we were told to be back at 2:00; it was just after 1:30.

Instead of walking back to town to kill time, in the rain, we decided to settle in and wait for her return. At 2:15, we wondered how much longer she’d be, and discussed leaving. She finally showed just before 2:30, and we waited another 15 minutes before she called Scott into her office.

After filling out more paperwork, Scott  handed over $210.00, which cleared us for 90 days. However, I will be traveling home to Baltimore for a visit (I am thrilled to spend time with family and friends. I’m a people person, and miss my people!), which puts a wrench in the works…so she says.

She claimed that once I leave Panama, the $105.00 fee will have to be paid again on my return, even though I’ll be traveling within our 90 days. This rule really smelled bad to us, and I hope that when I actually fly back, that it isn’t the case. Everyone we’ve talked to about our experiences with Madame Friendly confirms my nickname for her…and then some.

After a full day of offices and officials, and a running total of $495.00, we were officially temporary Panamanian citizens. Our travels in Panama will include the San Blas Islands, where we understand that there will be more fees to pay. Welcome to Panama, please open your wallet!

We’ve settled in at Bocas Marina, with the Panamanian courtesy flag flying in our rigging,  dwarfed by the gaggle of sail boat masts around us. We’re short, fat, different and proud! 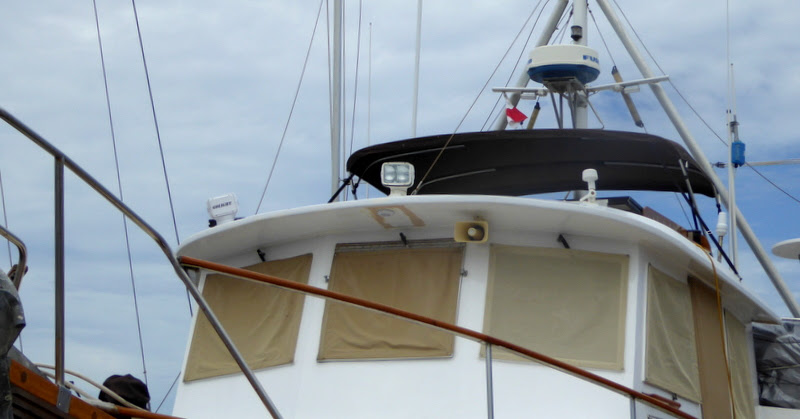 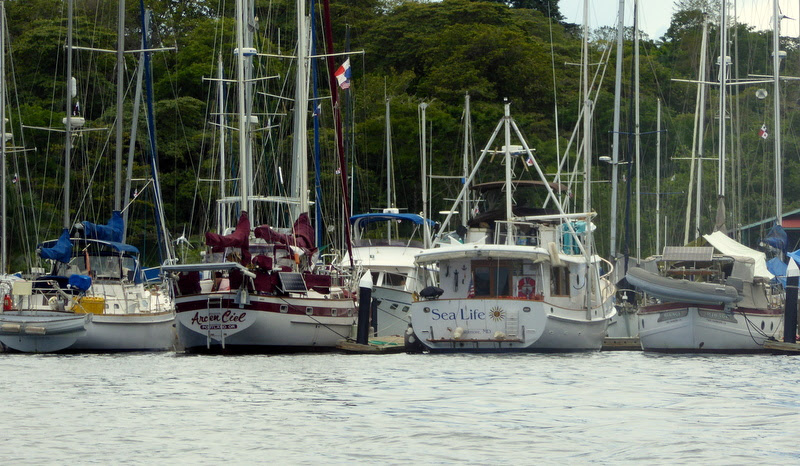 2 thoughts on “Clearing Into Panama…Break Out Your Wallet!”