Howard was coming due for his yearly rabies vaccine. Few animals enjoy vet visits, but instead of being quietly terrified (as my last two female cats were), Howard is very “sassy.” He has a Caution sticker on his file at home, and the older and stronger he gets, the more “piss and vinegar” he spits out at a visit. If anything more than a quick vaccine is needed, we have to take him in for the day, to be put under anesthesia.

As we travel, vets and techs are always surprised at Howard’s size when he comes out of his carrier. At just under three years old, he’s 16lbs and very strong. In Roatan, the vet sprayed some pheromones in Howard’s direction, in an effort to calm him. I wanted to inform the poor vet that there weren’t enough pheromones in the building to calm Howard when he’s mad, and I was right. The vet only got half of the vaccine amount in, the rest going all over me and Howard’s fur. Knowing that Howard has no chance of catching rabies, half a shot didn’t concern me. All I wanted was that piece of paper showing a record of the vaccine for customs, which we got…for only $15.00!

Extra stresses, like dinghy and panga rides, and hot car and rooms only make vet visits while cruising worse, and after a terrible experience in Bocas del Toro, we now try to minimize things that will accentuate said “sass.” Cartagena seemed like a good place to get Howard his latest rabies vaccine: we were at a dock, so getting on-and-off the boat was easy; with the great exchange rate for our U.S. dollar in Colombia, the vet visit was affordable and cabs were cheap. There was a vet in the Manga neighborhood, not far from the marina. Scott and I went on a reconnaissance mission, and all seemed good, so I made an appointment.

On vet day, we loaded Howard into his carrier, walked him through the marina and out to the street to catch a cab. He stayed calm, and seemed to enjoy taking in all the smells as we walked. The short cab ride was air conditioned, and so was the vet’s office (both things were taken into account on the recon mission….a cool cat is a less stressed cat), so things were going along smoothly.

Our wait was short, and we were soon back in the exam room with the vet. He wasn’t fluent in English, but was very friendly. We managed to get Howard out of his carrier, vaccinated and back in before he hardly had a chance to hiss…excellent!

The vet suggested that Howard also have a vaccine for Feline Leukemia. Howard is never around other cats, to contract the disease, so I declined. After the rabies vaccine, the vet again stressed the Leukemia one. He even phoned his daughter, who spoke fluent English, and had her talk to me.

It wasn’t that I didn’t understand, I just didn’t want to put Howard through another vaccine. However, worried that a customs agent somewhere in the Eastern Caribbean may require it, I changed my mind. We pulled poor Howard back out of his carrier for vaccine number two….BAD idea.

Howard knew he was still at the vet, and coming back out of that carrier meant nothing good was going to happen. He came out growling (skipping hissing, and going right for growling), and fought hard as Scott tried to restrain him long enough for the vet to get the vaccine in. When the needle went into his skin, Howard lashed out at the nearest thing possible; unfortunately, the nearest thing was Scott’s hand, and he suffered another puncture wound to the hand.

Scott released our seethingly angry cat, and cleaned his hand in a nearby sink. The vet held up the half-full needle and looked at me, as if to imply that he wanted to inject the remainder. Fat chance! We’d all had enough drama and stress for one day.

I blamed myself for not leaving well enough alone. We’d had the best ever vet visit going, and changing my mind had caused havoc. I should have known better, and felt terrible for both Scott and Howard. Howard only lashed out in fear and anger, trying to protect himself from perceived danger, not knowing that he was hurting Scott. Thankfully, this wound was nowhere near as serious as the bite Scott received in the San Blas, and it healed quickly.

So, I again walked away with half a dose of vaccine in my cat, and another updated record. Fingers crossed, we’re free of vet drama for another year and things are back to normal in Howard’s world. 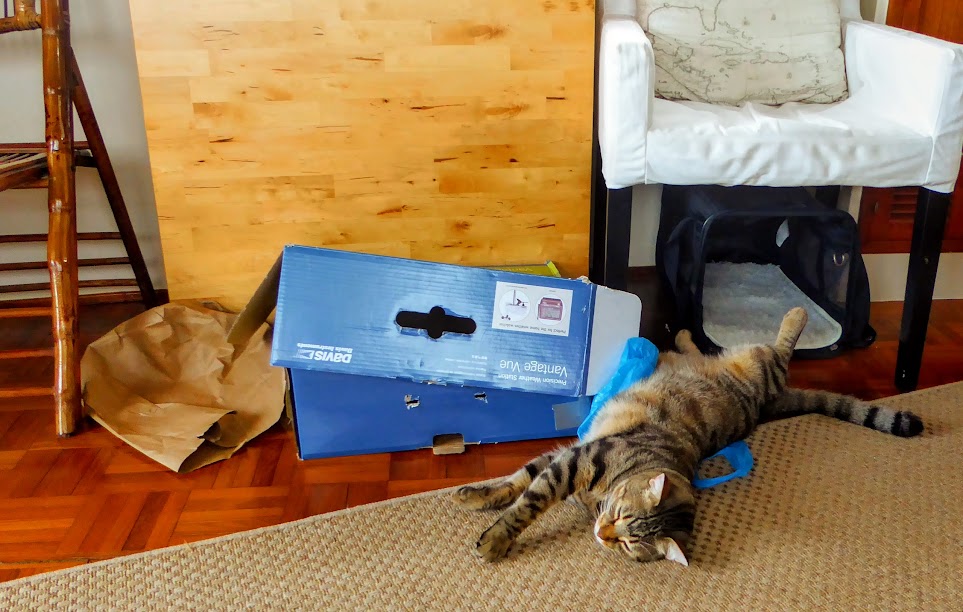