Guna villages have not always been located on the islands of the San Blas archipelago. During the 17th and 18th centuries, the small coral and mangrove estuaries of the San Blas were ideal for trade activities of the numerous pirates and traders operating in the region.

By the end of the 18th century when the days of piracy had passed, the Guna people slowly began to move from the protective cover of the jungle to the coastline, and by the middle of the 19th century, they started transferring their villages to the islands offshore.

The Guna Yala forest property extends for more than 1,250 square miles along the northeast corner of Panama’s Caribbean coast. There are still a few villages that exist in the jungles of the mainland forest, and near its rivers.

Gangandi, one of these villages, is relatively isolated, and one of Guna Yala’s poorest communities. It was not far from our anchorage in the Robison Islands, so Scott joined our friends Barbara and Ted (s/v Rosa dos Ventos), and two other cruisers for a tour. They were led by Bradeo, a local Guna who spent many years living in Panama City, before choosing to come back home to settle in the Robinsons.

Bradeo (with two “assistants” in tow) arrived to pick up everyone at their respective boats in an ulu, outfitted with loose boards across it to serve as bench seats. 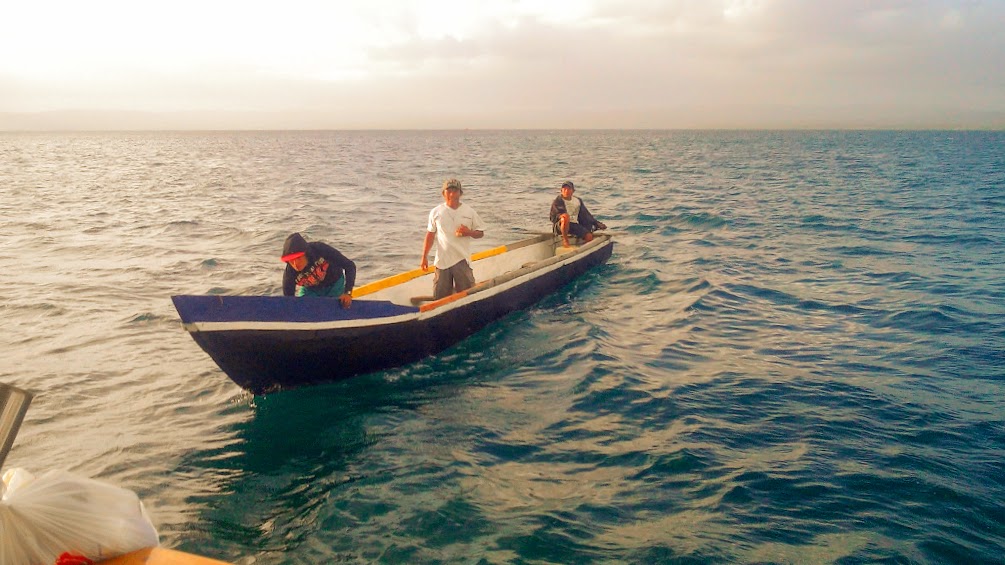 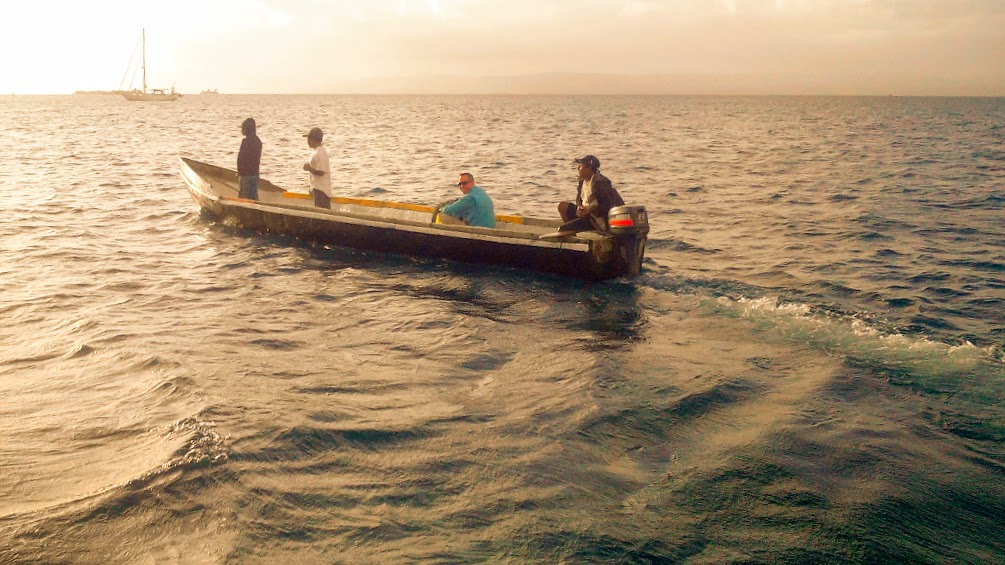 The group balanced on the unattached, wobbly boards as the ulu made a 45 minute ride through open water chop of the Bay of San Blas, then 25 minutes  up a canal once used  by the United Fruit Company to transport bananas, before finally going ashore. 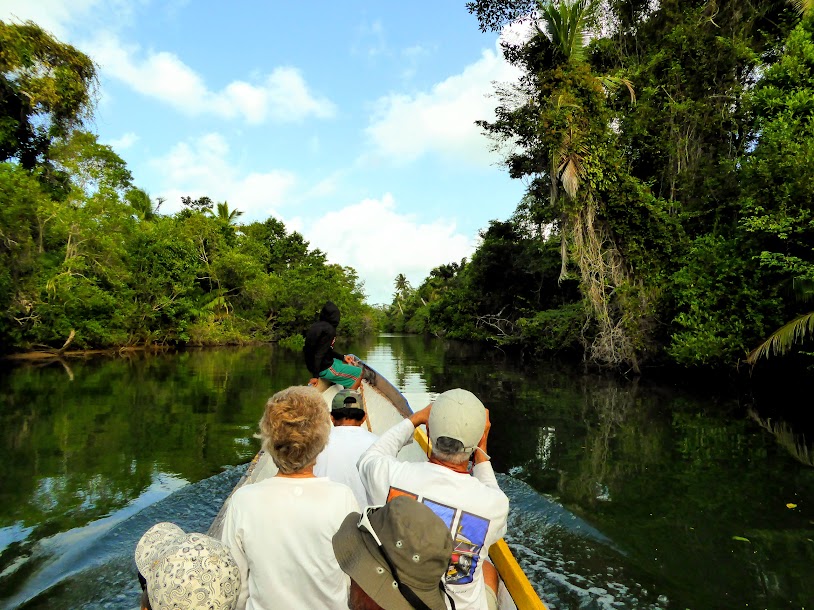 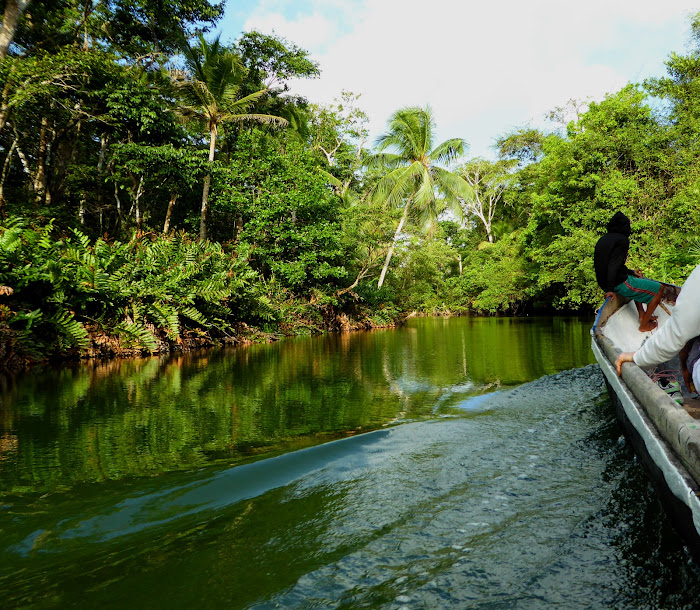 The next leg of their journey involved a 3-4 mile hike to the village. Not long after going ashore, the group walked an old air strip, also used by the United Fruit Company. Previously paved in tar, the runway was large enough to accommodate jets and Scott has since spotted it on Google Earth. They crossed a stream, noticing two small rails paralleling the wooden bridge across it; the remains of the United Fruit Company’s railroad tracks. The Gunas used these rails to transport  wheeled vehicles across the river, their tires rolling between the beams. Panama eventually built a bridge, to more easily transport construction materials for a new school. 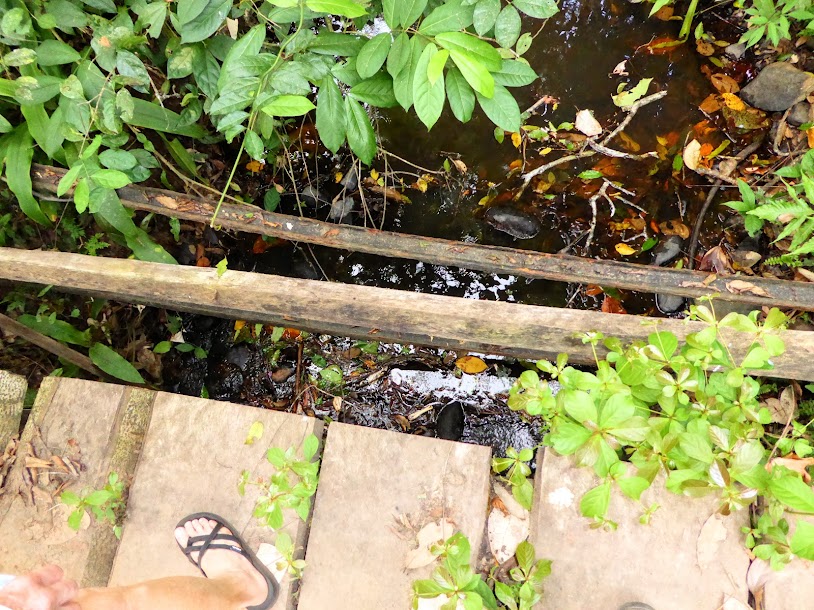 The group continued on, following the wide dirt road through the jungle, eventually reaching the edge of the village. 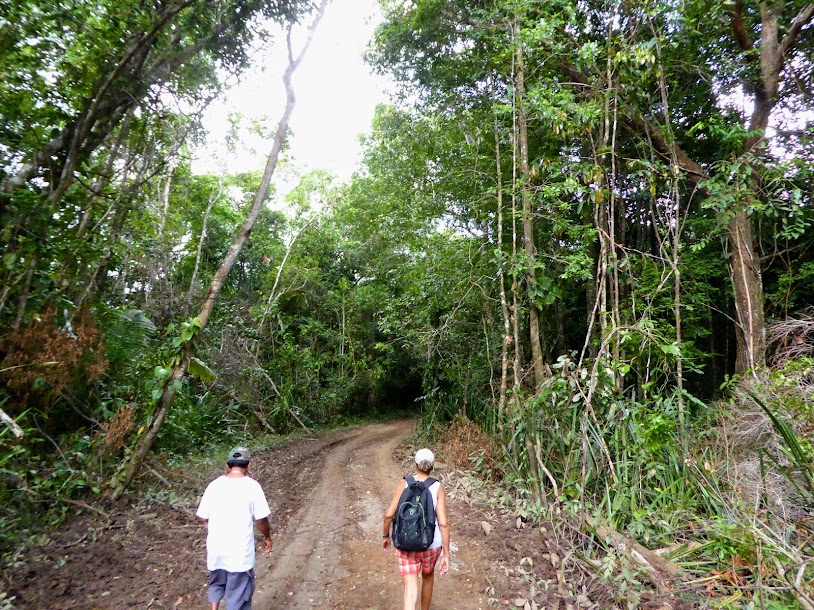 They first came to the area where a new school was being built. Panama requires the schools to be built with cinder block and concrete. 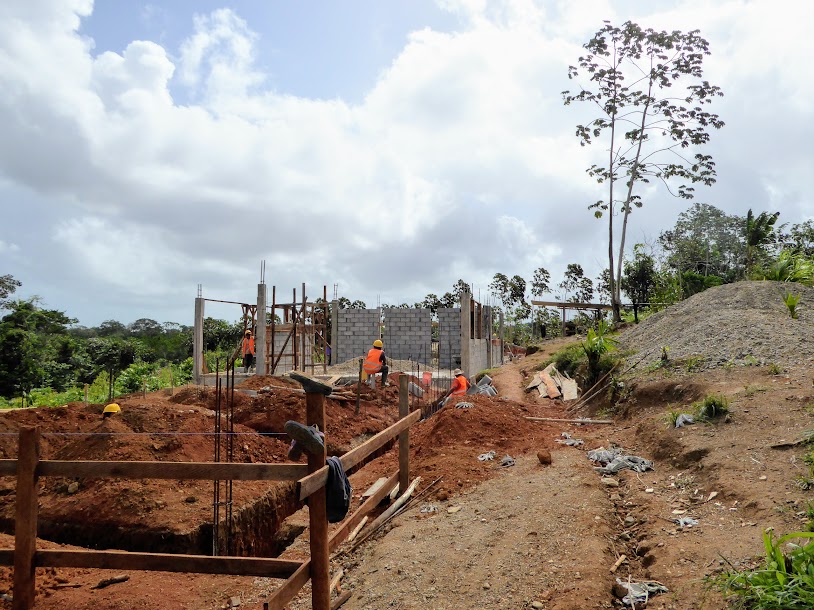 Scott wasn’t sure it was worth the time, as the current school didn’t appear to be getting much use. 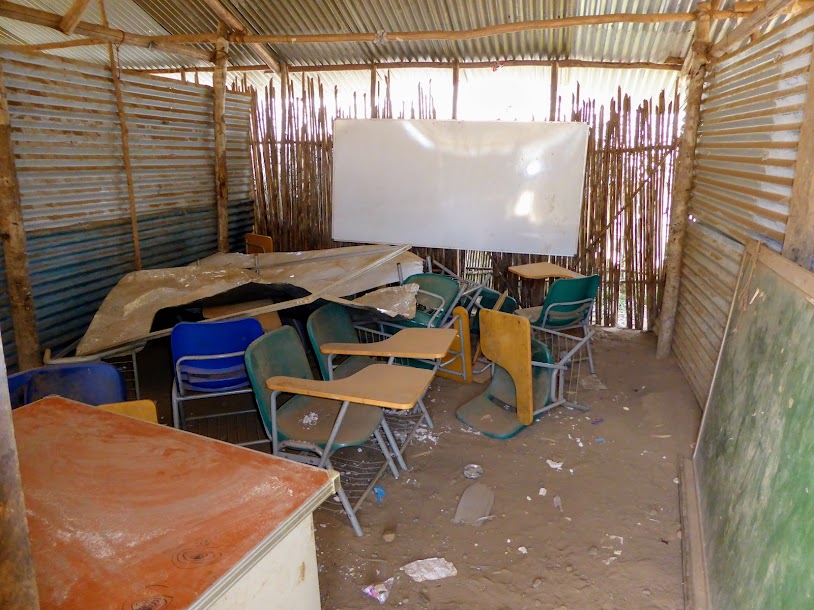 The group walked through the village, passing many homes, several small tiendas (stores) and the congreso building. 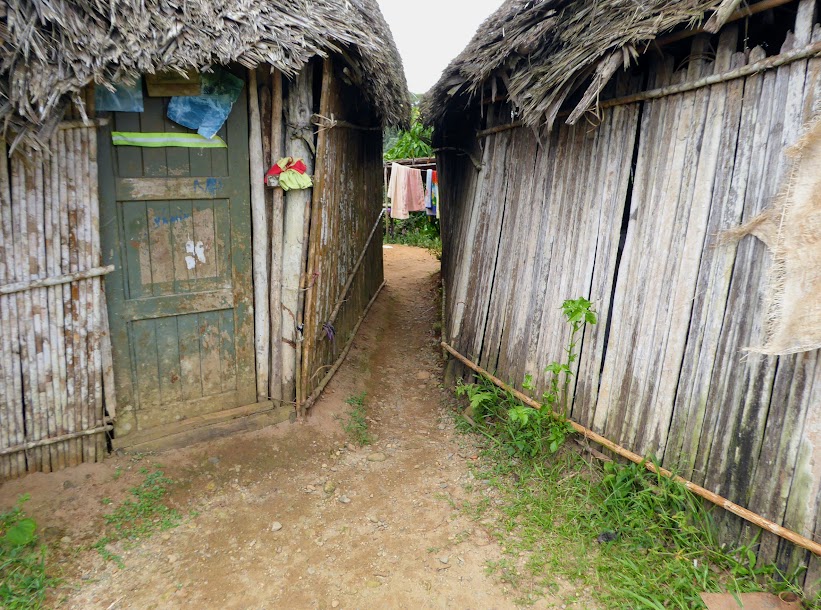 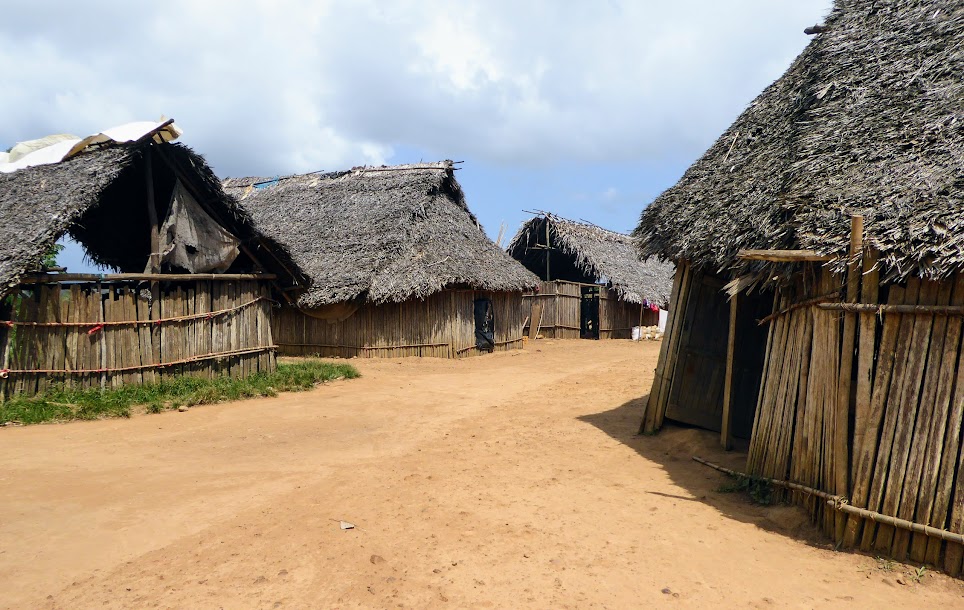 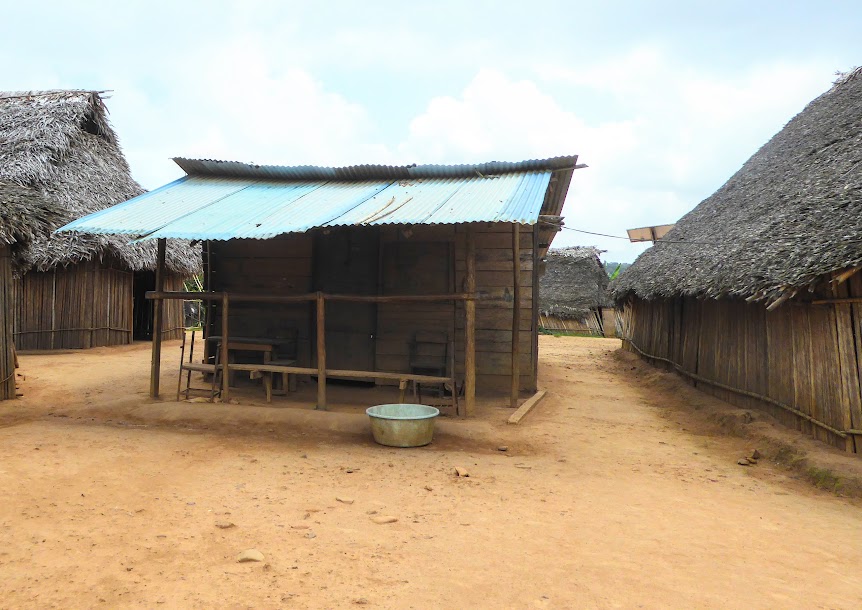 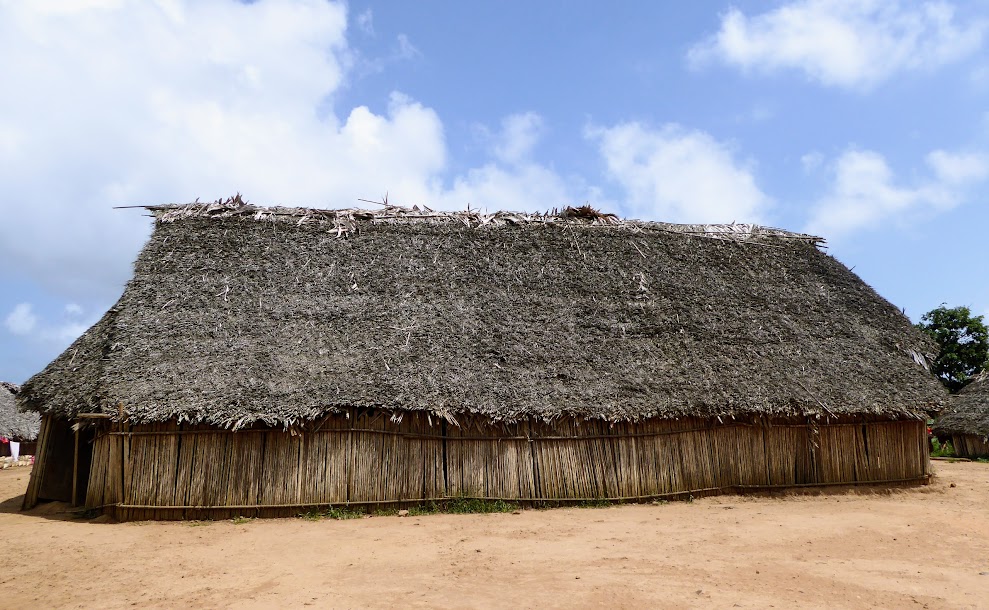 Men gather nightly in the congreso, to discuss local events and problems, make decisions on pressing matters and listen to the advice of the saila (Chief).

The saila sings the history, legends and laws of the Guna, and also sees over the day-to-day political and social affairs of the village. The songs are sung in a “higher” language, with specialized words, and are followed by an interpretation from one of the voceros (interpreters and counselors), in”everyday” Guna language..

The group was allowed inside the congreso building, to speak to the saila. Two other chiefs from nearby villages were visiting; a big event. The sailas were all laying in hammocks, and stayed put while talking to the group (occasionally leaning over to spit on the floor), while the voceros sat on surrounding wooden benches.

After their chat with the sailas, the group continue to walk the village. Photos were allowed, as long as the villagers were not in them. Of course, Scott found his way around the rule, and managed to stealthily take some photos, camera down at his side. His results were pretty good, capturing women hanging laundry, children at play and some “lazy” villagers napping in the sun. 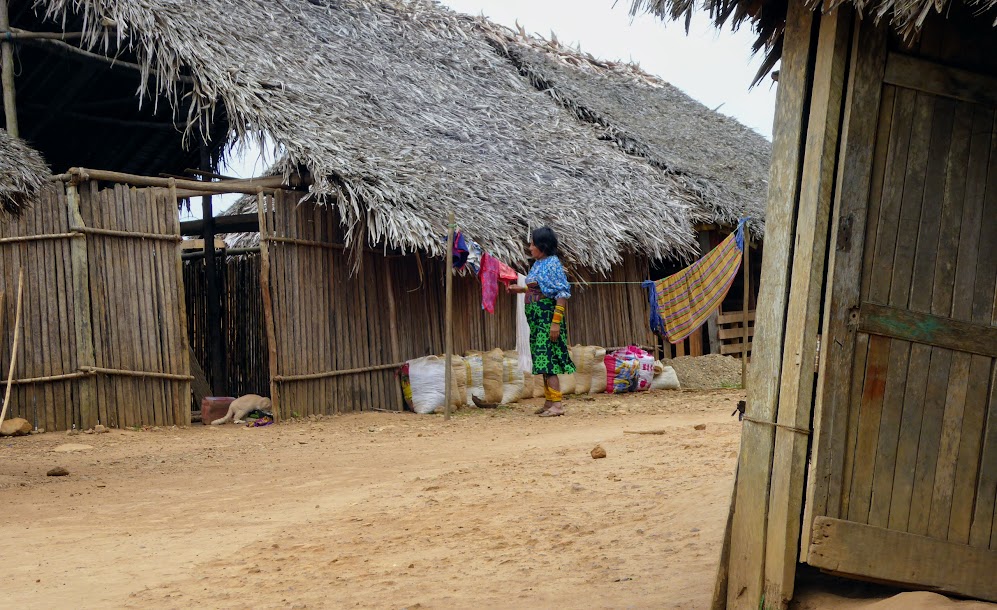 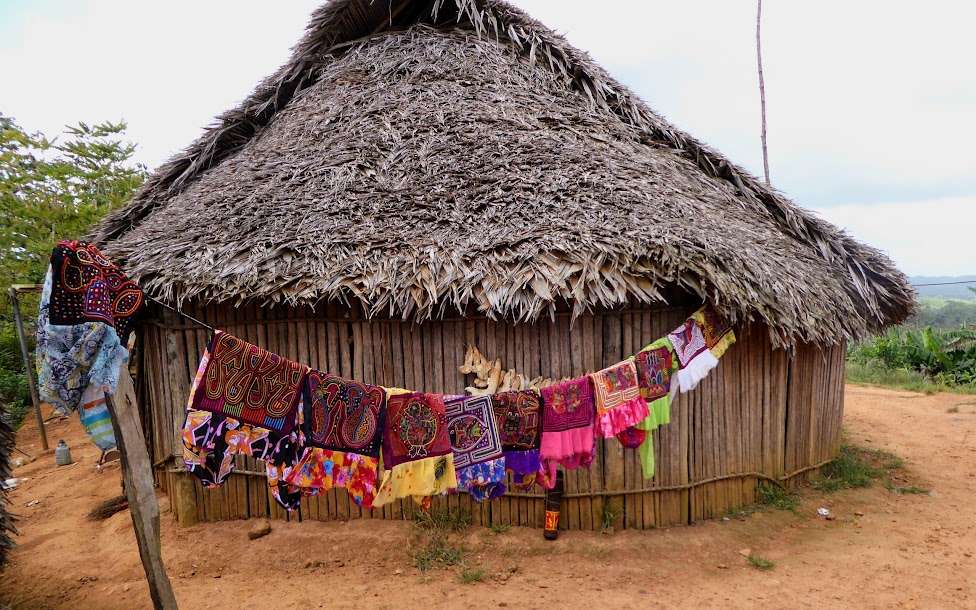 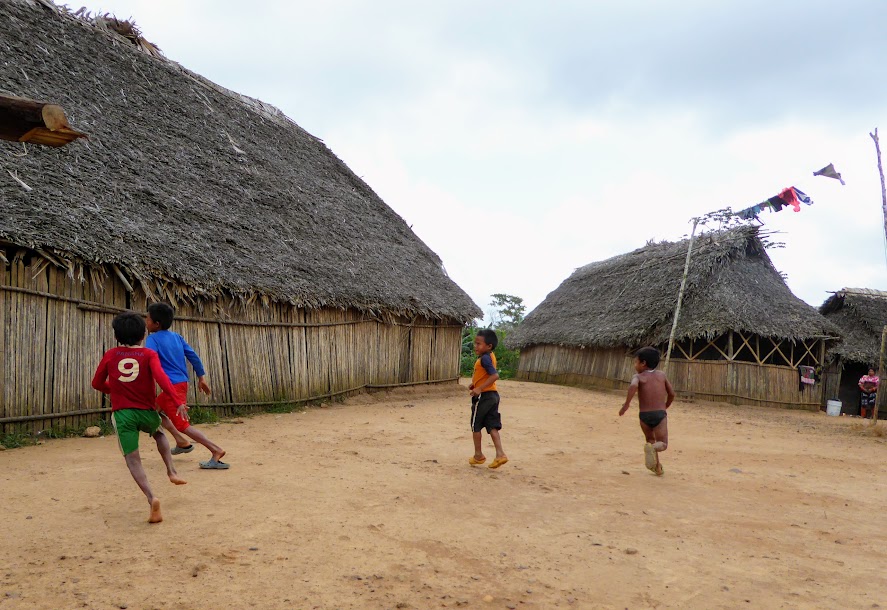 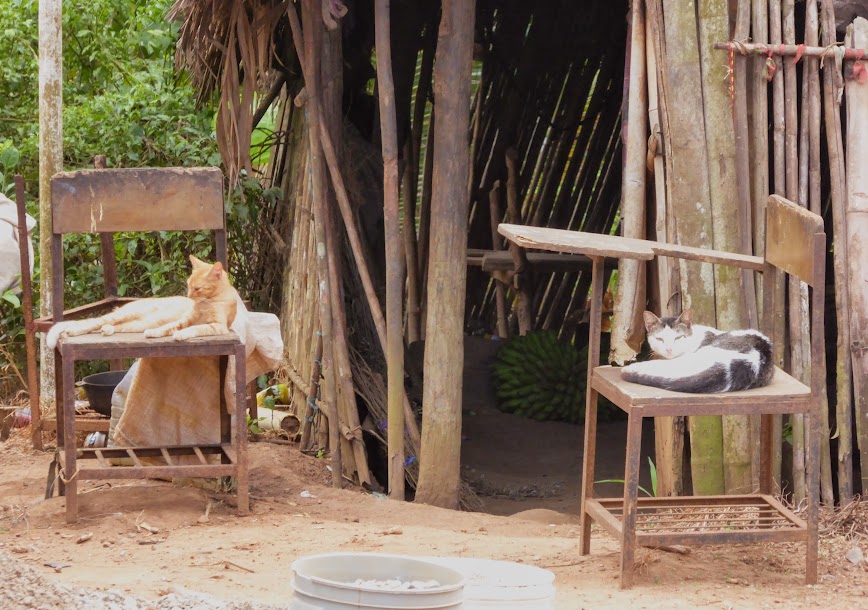 On the far side of the village, the group made their way down a hill, to the Gangandi River. Ahead of them, scenic, mountain views; behind them, the village, all but hidden from view by the jungle trees. 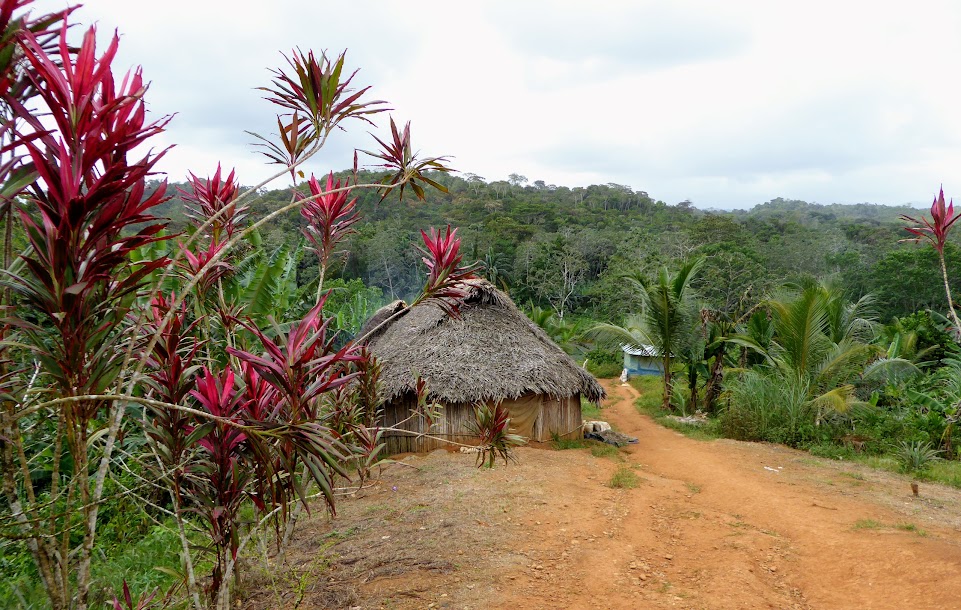 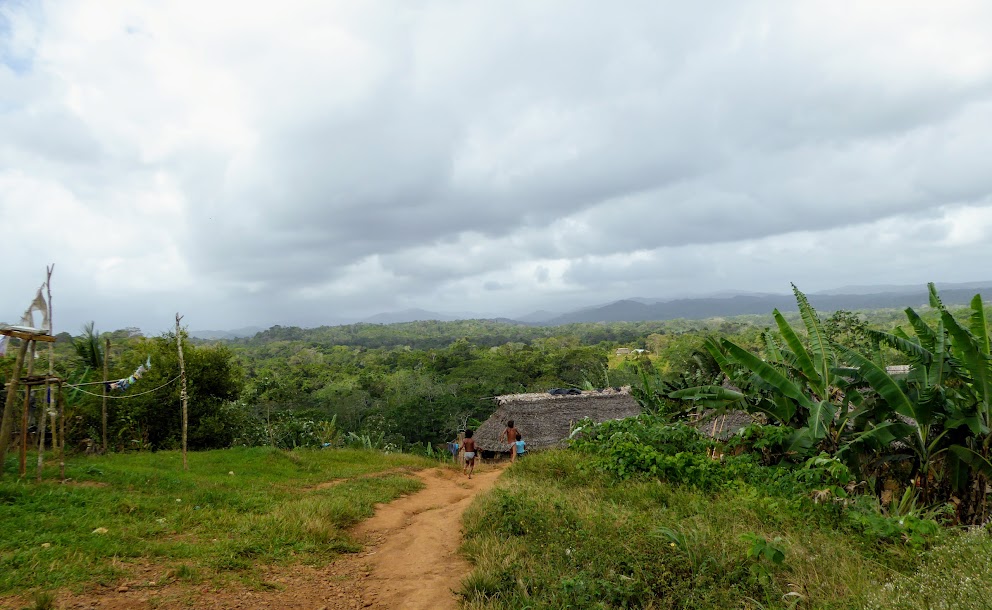 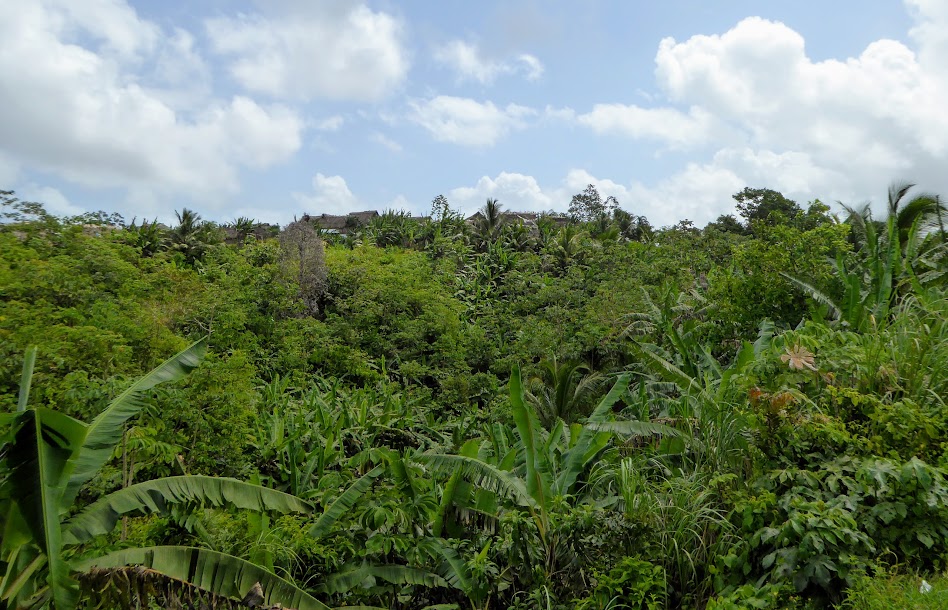 Originally located along the banks of the river, the Gangandi village began to experience life-threatening floods during the rainy season, with waters rising to extreme record levels.

In 2010, the elders finally decided to make a move. They suspended hunting and gathering, and tending to their crops, to concentrate all efforts on the monumental task of moving their village from the low-lying river bank, to more steeply elevated land. Teams of men, women and children managed to complete the move within four months, but suspending their food-providing tasks took much longer to recover from.

Today, women and children gather at the river’s edge to collect gravel, which is used to make concrete for construction of the new school. 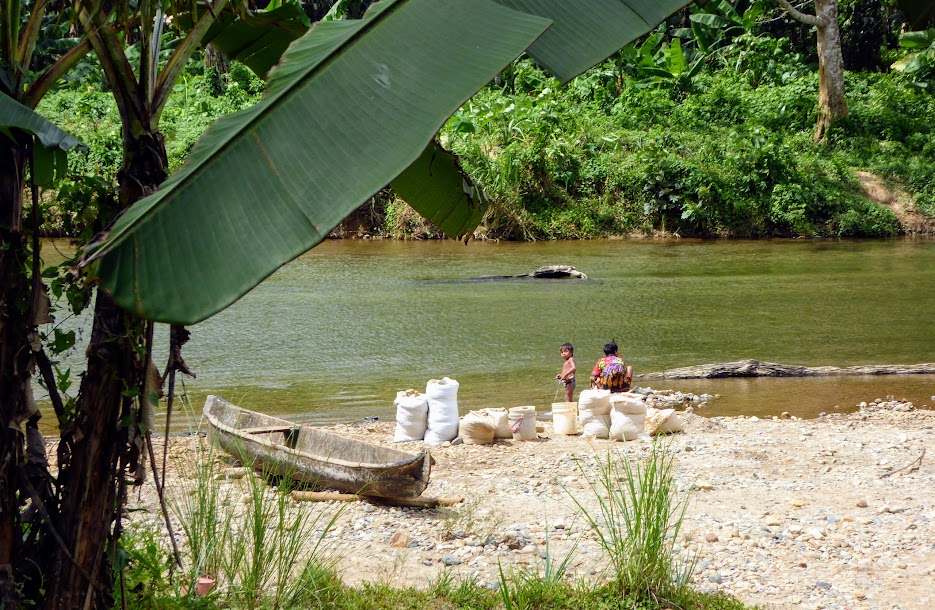 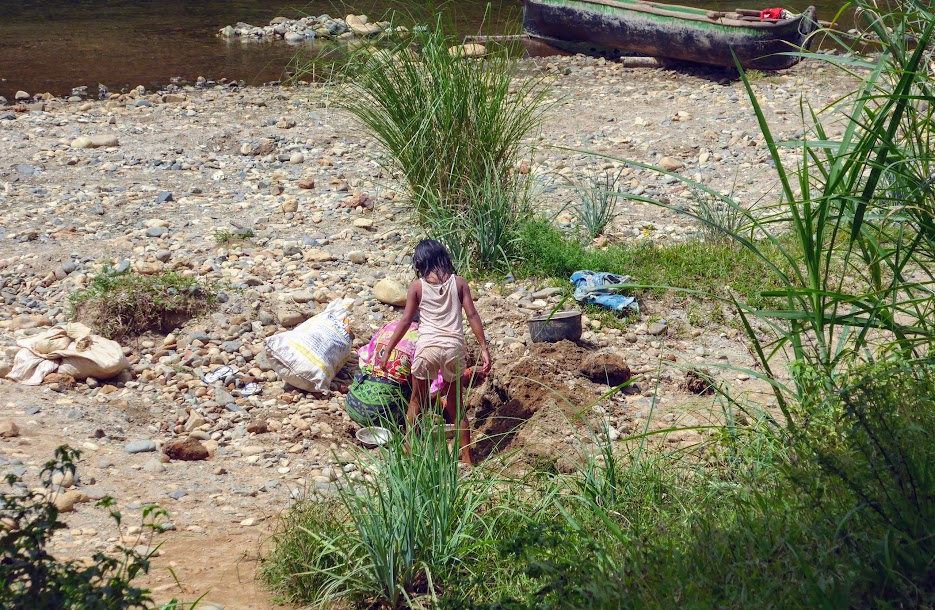 The gravel is bagged, then hauled (on their backs) to various area in the village, where it is spread out to dry. 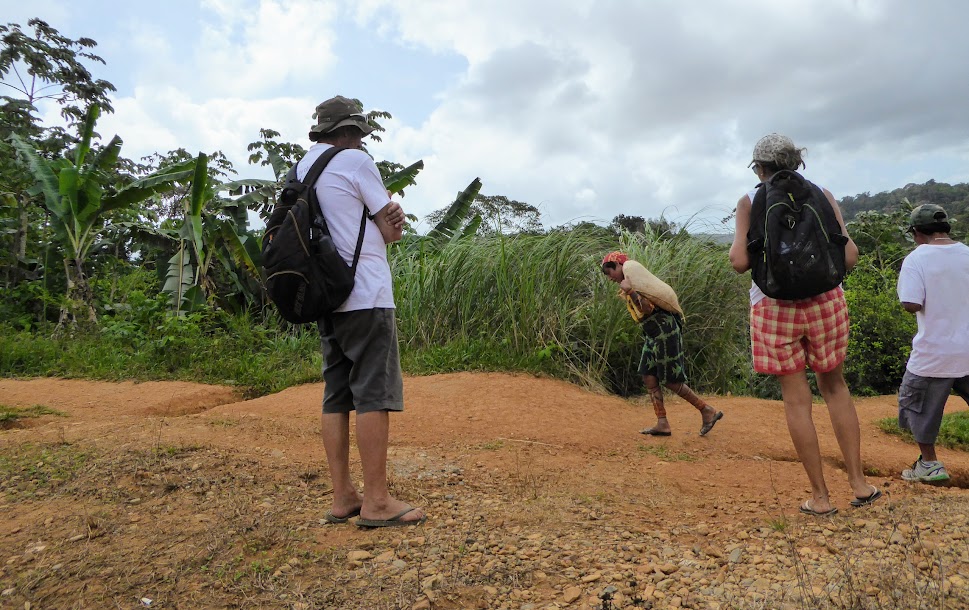 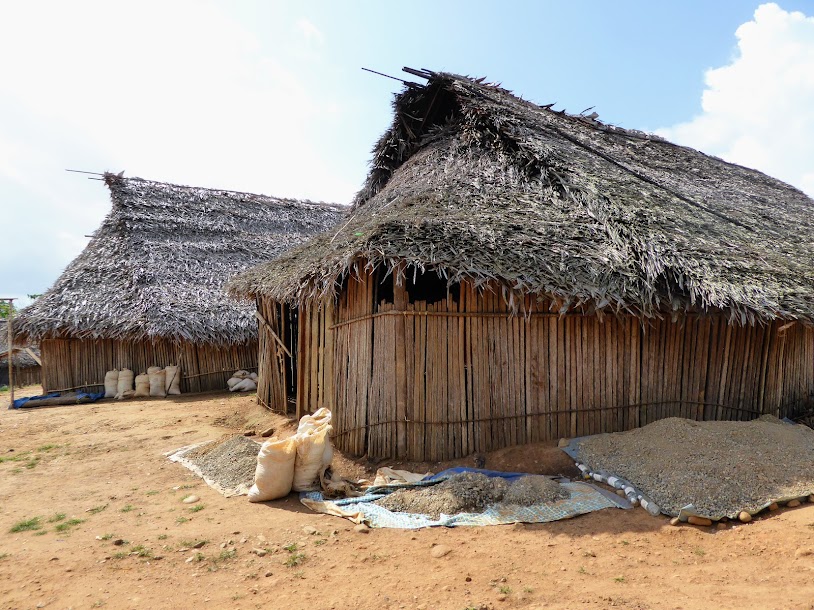 The women are paid roughly a whopping $1.50 for every 50 pounds of gravel, with the money going to the village. 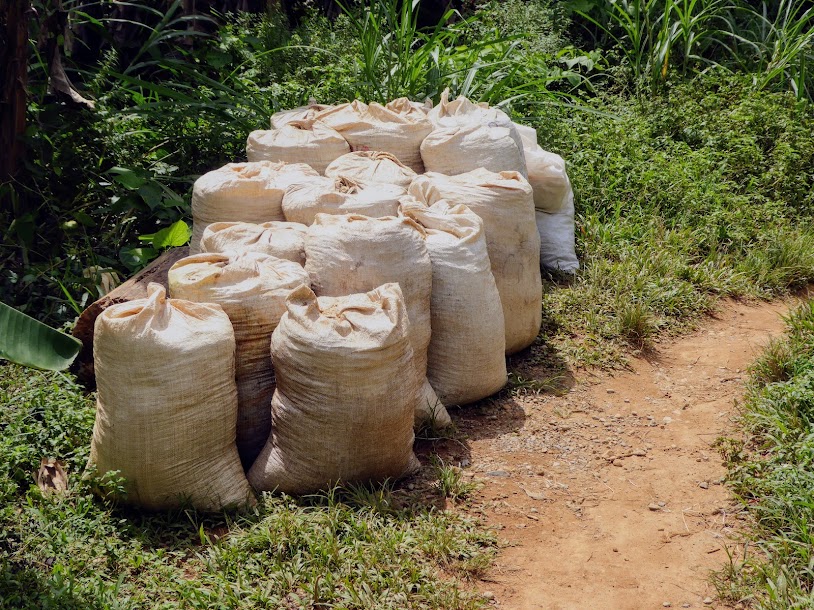 After returning from the river, and through the village, the group made their way back to the canal. Bradeo carried bananas and yucca with him for his family, back on the island village. 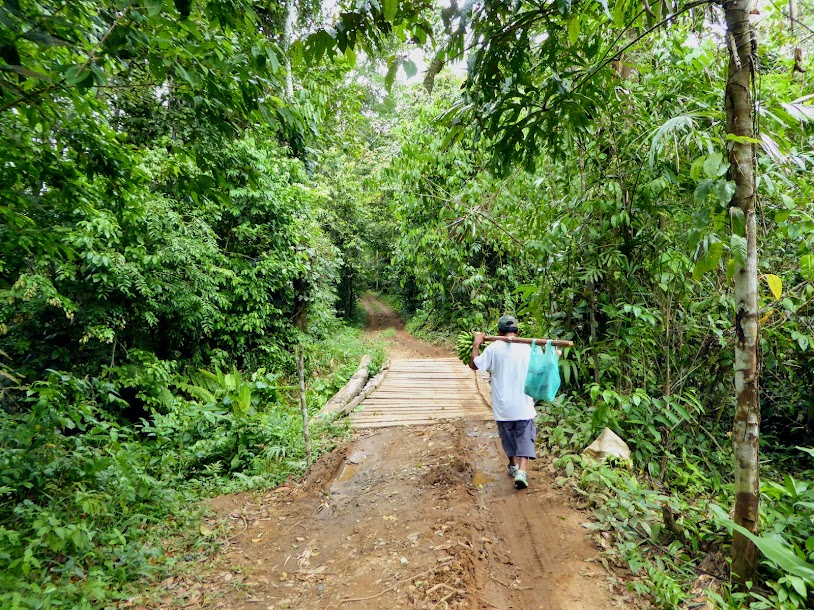 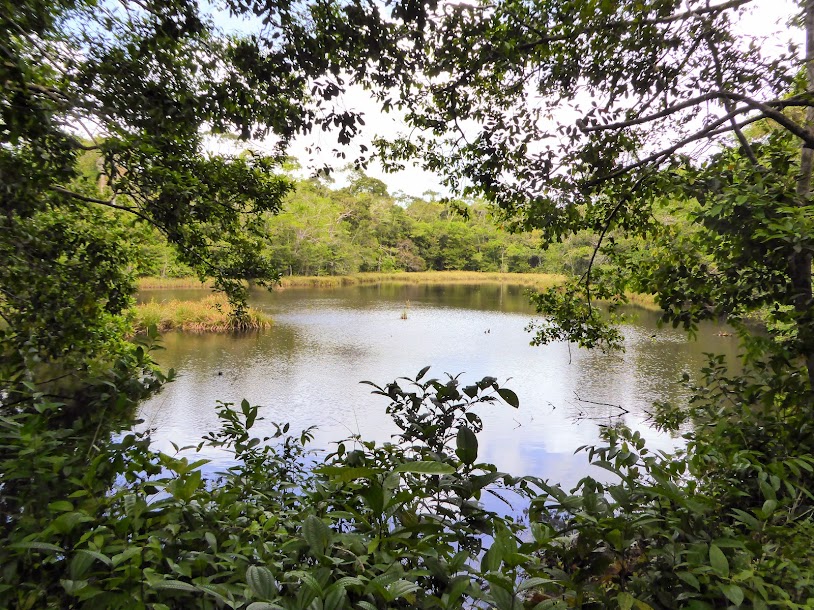 The group boarded their waiting ulu, and headed back to the Robinson anchorage. It had been a long, but very interesting day. 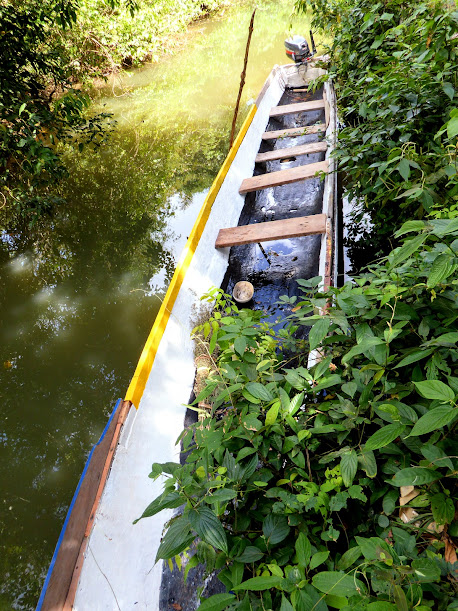