In late January, Howard began showing symptoms of a urinary issue; many trips to the litter box, leaving just dribbles behind. Before we left Baltimore, I’d visited our home vet, Dr. T., to stock up on various medications that Howard might need, so luckily there were antibiotics on board for him.

After a week, Howard showed no sign of improvement, so at Dr. T’s recommendation, we doubled his dose, meaning getting two eye droppers full of medicine in him instead one….fun for all!

Almost three weeks later, Howard was just marginally better. He then began throwing up, and I couldn’t get him to keep anything down. After three days with no water, we were very concerned, and began to make a plan to get Howard to a vet in Panama City.

The glitch was, that we had cleared out of Panama in December. There is a checkpoint stop on the road to Panama City, and if you do not have a valid stamp, off to jail you go. Our hope was to appeal to immigration on the island of Porvenier. Recent laws prohibit checking in and out of Panama in the San Blas. Boaters who are cleared into the country are only able to visit Porvenier to renew their stamp for an additional three month stay.

We left our anchorage in the Coco Bandero Cays, and traveled four hours to Porvenier, with fingers crossed that we could plead our case. Scott sent me in alone, to deal with the immigration officer, since only one of us needed to travel to the city, and we may have better luck with a female pleading the case.

“Joe” was a bit miffed that we’d checked out of the country 45 days earlier, bound for Cartagena, and were still in the San Blas (cruisers often do this with no problem…until there’s a problem). Because we both had “time” left in the country when checking out in December, Joe told me that if we traveled back to Portobelo (14 hours by boat), the immigration officer there would be able to cancel our exit stamps.

We didn’t have the extra days that it would take to do this, and then get to the vet. There was also the issue of getting back to the San Blas, with winds expected to pick up. I explained that we’d had steering trouble, and were unable to get back to the mainland by boat (a big fib on my part).

After two hours of back and forth, with few words understood between us, many pictures drawn and tears on my part, Joe told me to have Scott come to the office. When Scott arrived onshore in the dinghy, I told him to relay that he spoke no Spanish (when in fact, he can get by quite well now), and brought him up to speed on the story inside so far.

Once we were both back in the office, there was more of the same back and forth, before Joe finally consented to canceling our exit stamp, marking next to them in Spanish that seas were not good for us to make it to Cartagena. He told us to come back to see him for Scott’s renewal stamp (mine was due much later, as I was re-stamped when flying back in from the U.S. in October), and then again to get stamped out of Panama.

Thrilled that our pleas had worked, we raised anchor, and made a quick hour-long run to an anchorage near the docks at Carti, which is on the mainland. I’d contacted Emilio, who we’d planned to use for provisioning, and asked him to help me arrange transportation to get Howard and me to the vet, as I had no idea how to proceed.

Howard was loaded into his carried, and Scott took us to the dock in the dinghy, where we hopped into a running, air conditioned suv. It was a three hour ride across the mountains, through a checkpoint at the border of the Guna Yala region, into the city and to the vet. The driver maneuvered the road like the car was on fire, hitting the many curves and potholes at full speed. I was shocked that the car’s axles didn’t snap. Howard endured the “Mr. Toad’s Wild Ride” like a champ.

As we came down the mountain road, and headed toward the city, the driver pulled into a gas station…presumably for gas. He stopped the car, with the engine running, and proceeded to take a nap! When I realized what was going on, I was both irritated that we’d stopped for this, with my cat needing to get to the vet, and glad that he had the good sense not to fall asleep at the wheel.

Deciding  that a ten minute nap was fair, I watched the clock, preparing to wake him up. He popped up on his own, after seven minutes, declared, “Good! and we continued on. We made our way into town, and I was delivered right to the door of the vet.

I didn’t have an appointment, and thankfully a young  man waiting with his own cat helped me to speak with the woman behind the counter. After a very short wait, Howard and I were in a room with a vet, who thankfully spoke English. She took Howard away, to use gas to relax him for testing. Howard is not a good vet patient. At home, there is a “caution” sticker on his folder.

In the meantime, Emilio arrived to sit with me, in case I needed help with translation. The vet spoke very good English, but Emilio did help me arrange a hotel for the night. With the “Carti” road closed at 7pm, there was no way to get back to the boat in the same day.

Howard’s initial tests: blood, urine, xrays and sonograms all came back clear. Hmmm. I arranged for him to stay overnight, wanting him to receive fluids.

Emilio then took me shopping, stopping first at Riba Smith, a large grocery store with many American items. I was in heaven, and loaded up on cream cheese, butter and other goodies from home. We then went to a nearby mall, where I was able to buy some magazines printed in English! I arrived at the hotel later that evening, with some McDonalds food in tow.

After turning the air conditioning down to a chilly 68, and watching some English channels on tv, I happily fell asleep in the comfy hotel bed. At 3am, I woke in a sweat. When I tried to adjust the thermostat, it crackled and sparks came out…not good.

I called the front desk, and they sent someone to “check” the thermostat, most likely thinking that I couldn’t manage to set the temperature on my own. After getting his own set of crackles…and some smoke, the man cried “Oh!…Bad!,” and called back down to the front desk.

I was told that they were happy to move me to another room, but unfortunately it was on a different floor. That didn’t bother me in the least, as I was determined to absorb as much air conditioning as possible, so I loaded up my backpack, and made my way down two floors at 3:30 am, barefoot and in my pajamas. There I resumed sleep, in a freshly cooled room.

The next morning, after enjoying the complimentary breakfast buffet (I am told that all hotels/B-n-Bs/inn, etc. are required to provide a free breakfast to their guests), I met Emilio and his friend, Gil, who sped me off for more provision shopping.

Our first stop was to Pricesmart, a membership bulk store owned by Costco. I loaded my cart with soda, bacon, lunch meat, cheese, vinegar (used for monthly toilet deep cleaning, and laundry) and various other things. The next stop was to a local bulk store, which offered some of my wish list items at better prices than Pricesmart, such as wine, rum and sprite.

I checked in with the vet, who said that Howard hadn’t eaten, but she didn’t expect him to while in a strange and stressful place. He’d been given fluids, and a shot of both antibiotic and something for his stomach. She declared Howard ready to leave, so we planned one more stop before heading over to pick him up.

Our last stop was one more visit to Riba Smith, where I purchased more cold items, and some bags to keep them cool for the journey back to Sea Life.

Emilio said his goodbyes, as he had another client to meet. Gil would be taking me to collect Howard and then to meet my ride back across the mountain. Emilio’s help had been invaluable, knowing where the stores were, which ones had the items I wanted and at the best prices. The process would have taken far longer on my own.

Gil and I arrived at the vet, where Howard was growling at anyone who came near him. He calmed when he heard my voice and received some petting in his carrier. I paid my bill of 180.00, which included the vet visit, overnight stay, xrays and sonograms of stomach and bladder, blood and urine tests, two injections each of antibiotic and gastro meds, iv fluids and some cat food for urinary tract health…much cheaper than US prices!

Nacho, the driver who would take us back to the Carti docks, was waiting outside a small local restaurant at the start of the mountain road. We loaded all of my things, and Howard, into his car, filling all but the passenger seat (the area behind the back seats was piled high, and the floors under both Howard and me were packed full).

Along the way, we stopped for Nacho to relieve himself behind the car, a much faster delay than the previous driver’s nap. At the Guna Yala checkpoint, the official who came to the car windown to check my passport was intrigued with Howard, waving over the other guards to see him, calling, “Howard, Howard!”

When we arrived at the Carti dock, I asked Nacho to help me get a panga ride back to the boat, as I hadn’t prearranged one. He loaded my things onto a panga, with several locals onboard waiting to depart. It took five trips of heavily loaded wheelbarrows to get my stuff onto the panga, and when I walked down the dock with Howard, to get on, the driver wasn’t happy. Apparently, Nacho had told him that I had only a few things. “Senora”, he said, “this is a supermarket!” In his defense, it was a huge amount of stuff.

After a short, five minute ride, we were back at Sea Life, where Scott was waiting to help unload my things. Howard was glad to be home, and seemed none the worse for wear. He immediately wanted food, ate plenty of it and then settled into a deep sleep in his taco, sporting his new haircut. 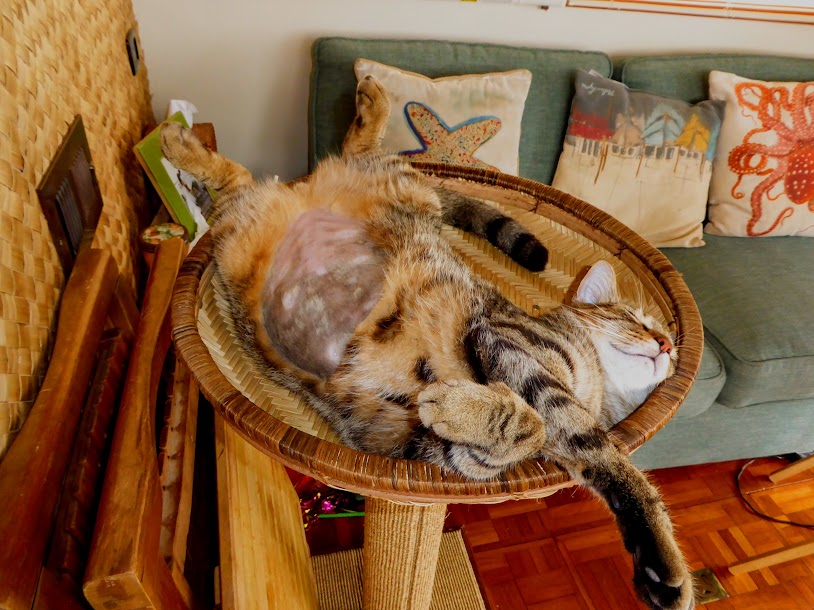 Scott was quite peeved that after the whole, logisticly-challenged ordeal, the vet had found nothing wrong with Howard. We think that his urinary issues were near done, and the gastro stuff had almost worked their way through; the injections may have also helped resolve both issues.

In the end, maybe Howard just wanted a few days away from the boat….and an adventure.