After our overnight in Panama City, we planned a train ride back to the Caribbean coast. Instead of taking a cab all the way to Linton Bay, we decided to hop on the Panama Canal Railway to Colon, and take a cab back to Sea Life from there.

The Panama Canal Railway runs parallel to the Panama Canal, linking the Atlantic and Pacific Oceans. The route stretches 47.6 miles across the Isthmus of Panama, from Colon on the Atlantic side, to Balboa in Panama City. It was the most expensive railroad ever built, at a cost of eight million dollars, and at $295.00 a share, the Panama Railroad was at one time the highest stock listed on the New York Stock Exchange.

The primary reason for building the railroad was to increase traffic to California, due to the Gold Rush in 1849. Construction began in 1850, and the first money-making train ran over the full length of track in January of 1855. The Panama Railroad was referred to as an inter-oceanic railroad, and later a “transcontinental” railroad, despite the fact that it only spanned Panama’s narrow width.

As with the construction of the Panama canal, the area was not an ideal location to build a railroad. From June through December there were deluges of rain (which we can attest to) that often lasted as long as three days. The whole area was covered with dense jungle, thick with humidity, and there was no durable timber for construction. In addition, the native people were not used to physical labor, and were undependable. Men, materials and provisions all had to be imported from thousands of miles away.

Cholera, yellow fever and malaria took a severe, deadly toll on construction. Despite the fact that large numbers of new workers were constantly being brought in from the United States, the Caribbean Islands, and as far away as Ireland, India, China and Australia, there were times when work was stalled for simple lack of “live” or healthy workers. Disposing of the dead became such a problem, that the railroad started “pickling”  the bodies in barrels, and selling them to medical schools! The proceeds were used to build a hospital for the railroad (a hell of a fundraiser!).

In 1881, the French purchased controlling shares in the Panama Railroad Company, and employed the railroad in the excavation of the Panama Canal. In 1904, the United States purchased the railroad from the French, when they took over canal construction. The railroad closely paralleled the canal, and was moved and reconstructed where it interfered with canal work. New sections were built on higher ground, using heavier gauge line.

The use of the railroad was vital in construction of the Panama Canal. Two hundred train loads of dirt were removed every day from work sites, and the railroad also transported materials and labor. In addition, the trains served as sleeping quarters for workers.

Once complete, the railroad became one of the most profitable in the world, charging up to $25.00 per passenger to travel over the 47 miles of track. It was an engineering marvel of the era, until the opening of the Panama Canal, and carried the heaviest volume of freight per unit length of any railroad in the world. The existence of the railway was key in the selection of the canal site.

Ok, back to our ride…

The main purpose of the train is as a commuter rail for people living in Panama City, working in Colon, but it has also become popular for tourists as well. Several of  our cruiser friends had taken the ride, and highly recommended it. Passenger service only runs twice a day, with a train leaving Panama City in the morning, and returning from Colon in the late afternoon. Since we only had one choice for departure, we arrived at the station early in the morning, purchased tickets and climbed aboard for the hour-long, cross country ride.

Inside, the cars had the feel of the early 1900’s, with dark wood paneling and carpeted floors. Both booth and table seating lined either side of the aisle, offering clear views out of large windows.

We were given a breakfast snack box,  which was barely touched before Scott had ants in his pants to head out to the observation deck between cars. 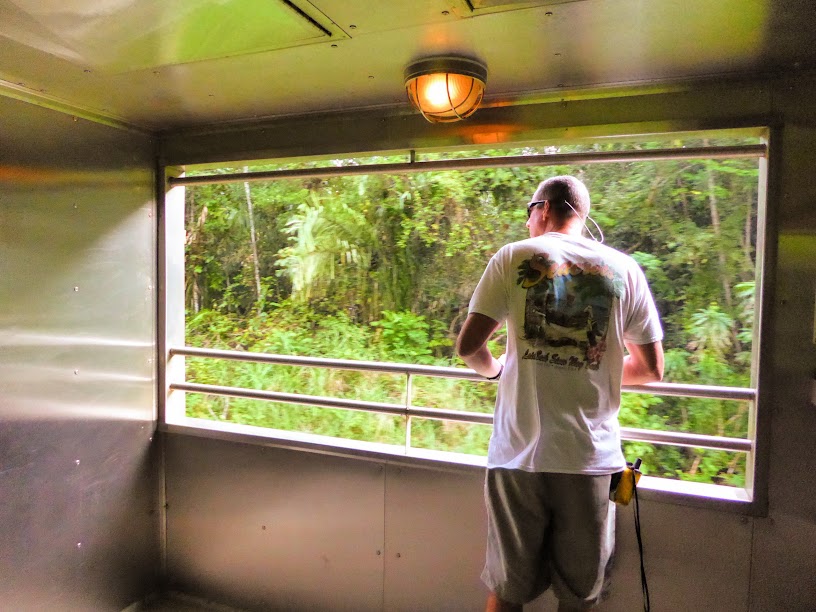 Since the railway parallels the canal route, we were able to see boats transiting the canal’s waterways. Some we’d seen from out hotel balcony the night before…pretty neat! 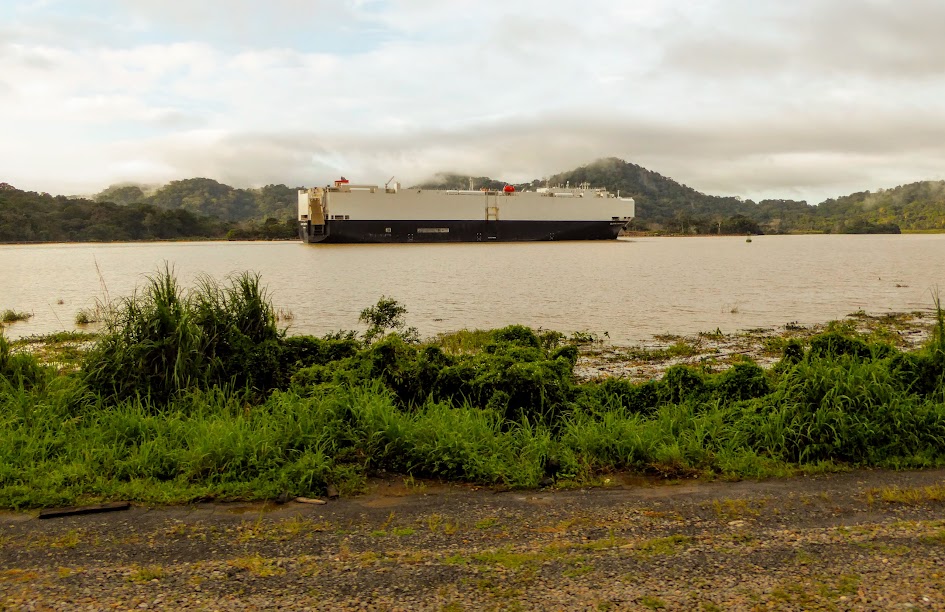 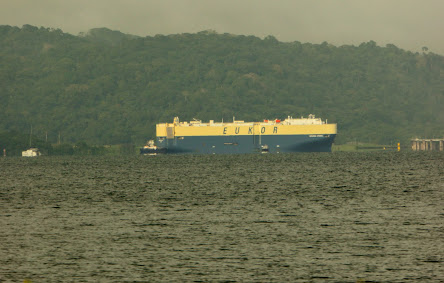 We also passed by areas where old buoys, work boats and other canal maintenance equipment was kept, including dredging pipe and the huge machines used to keep the canal route clear. 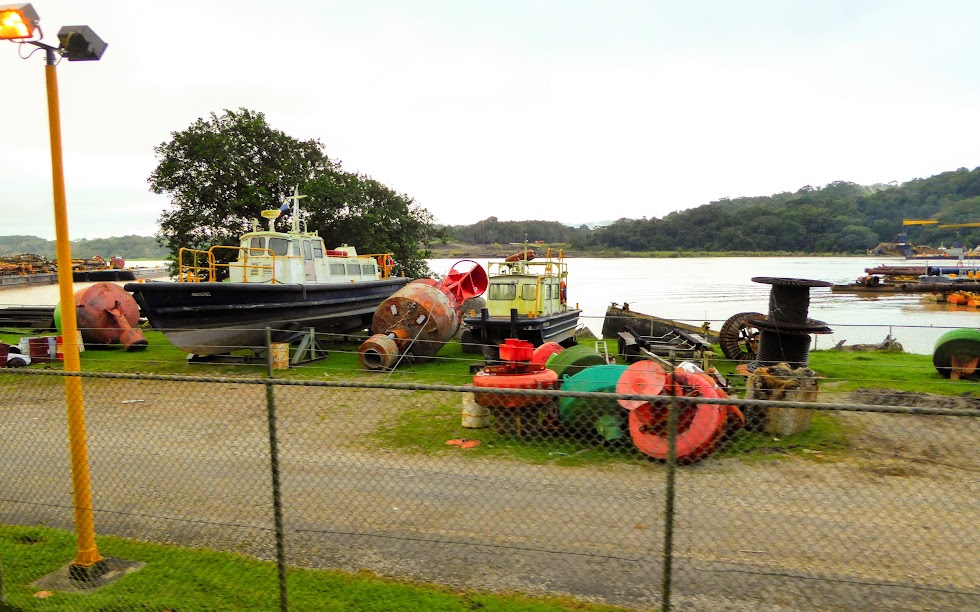 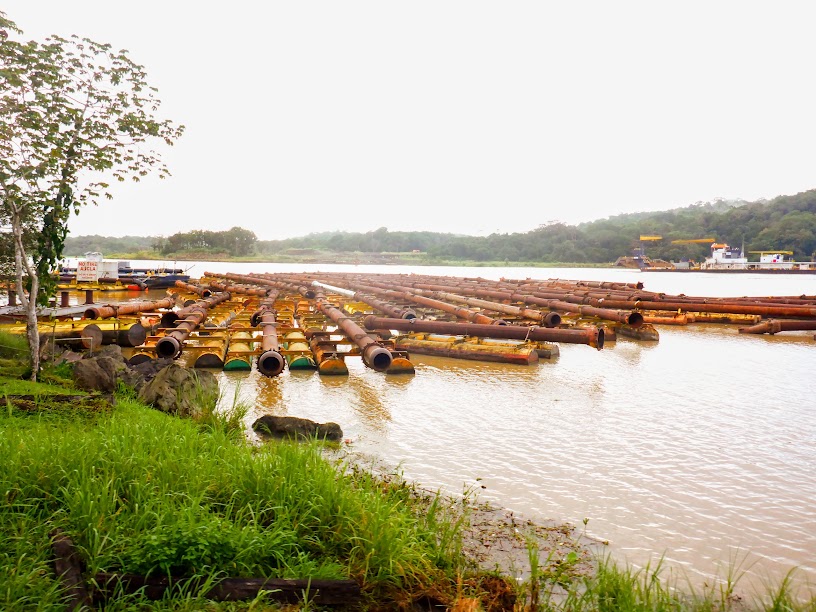 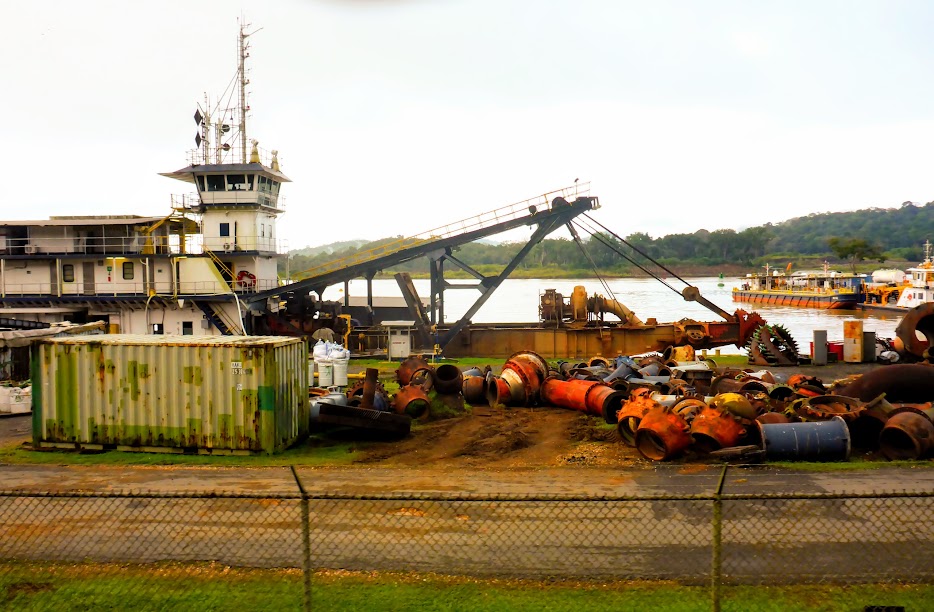 The railway runs through the jungle, and across Lake Gatun. We spent the entire hour outside, taking in the scenery passing by. 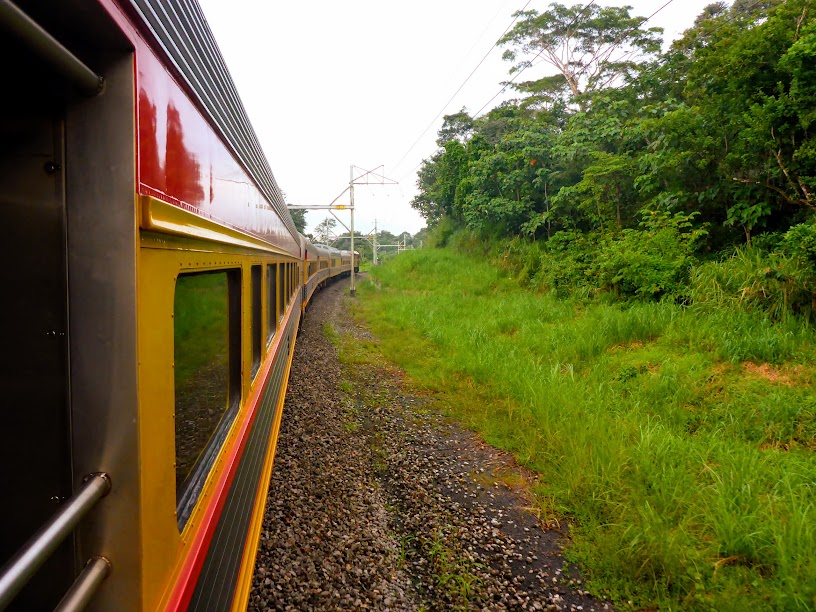 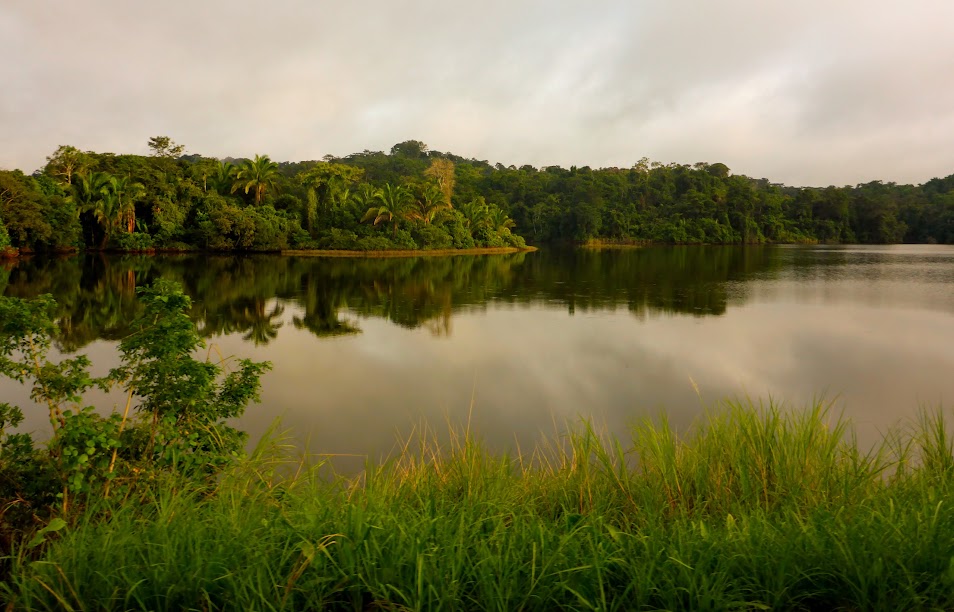 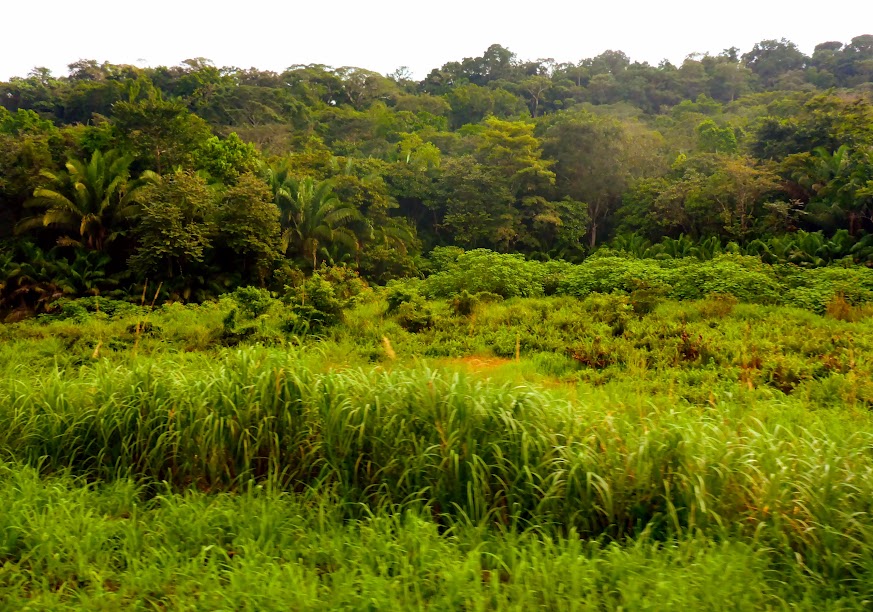 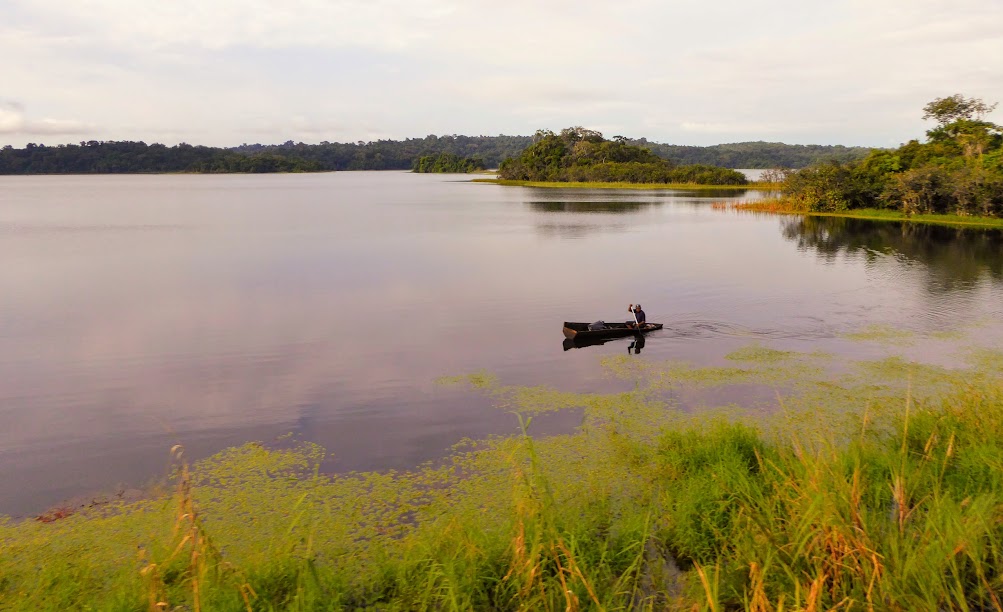 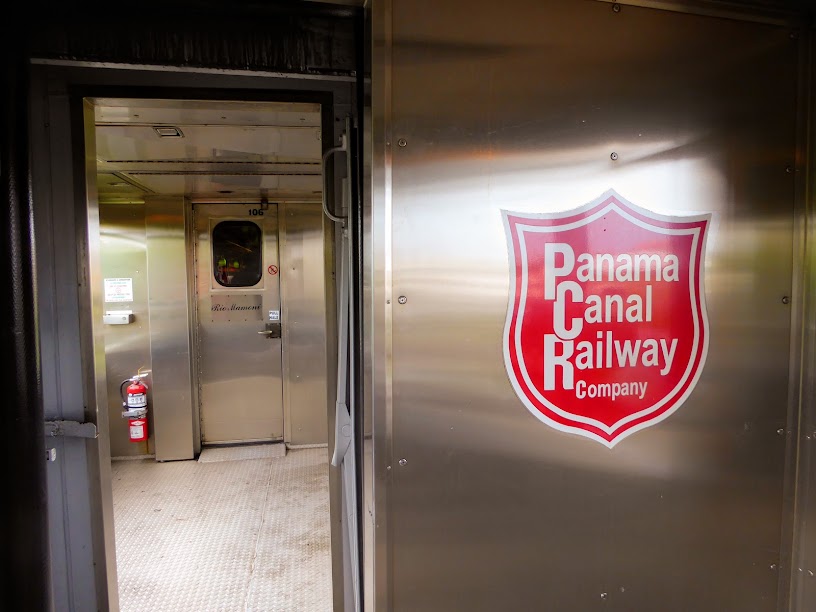 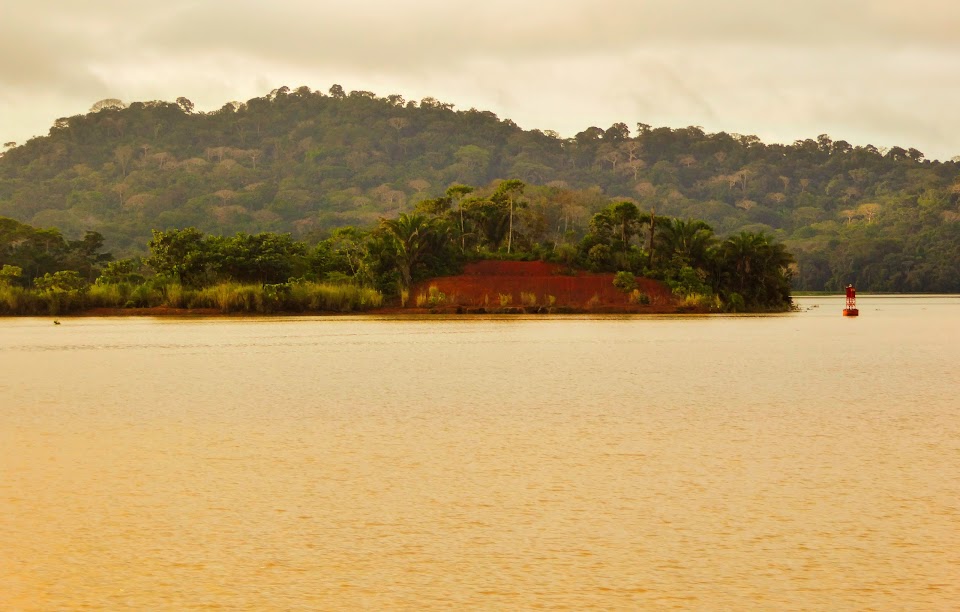 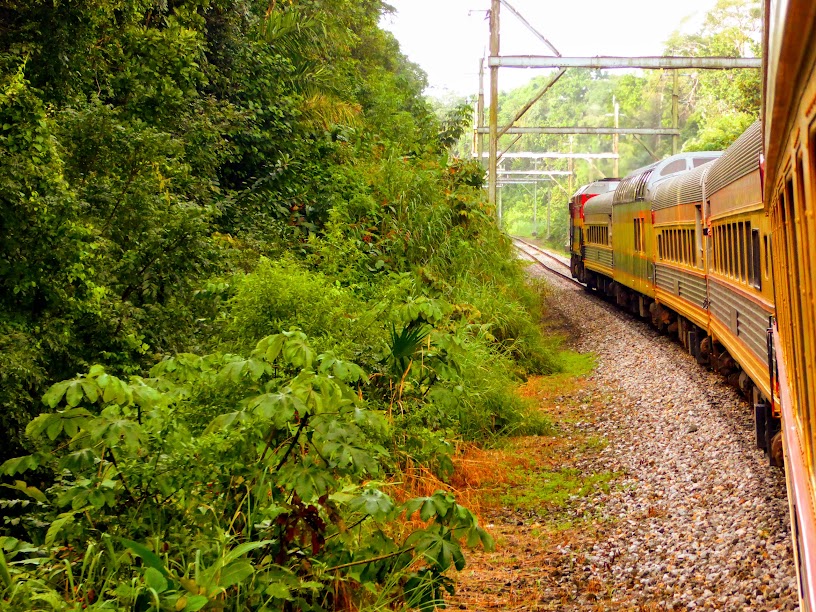 Along the way, we also passed by the canal locks, and could see boats going through. 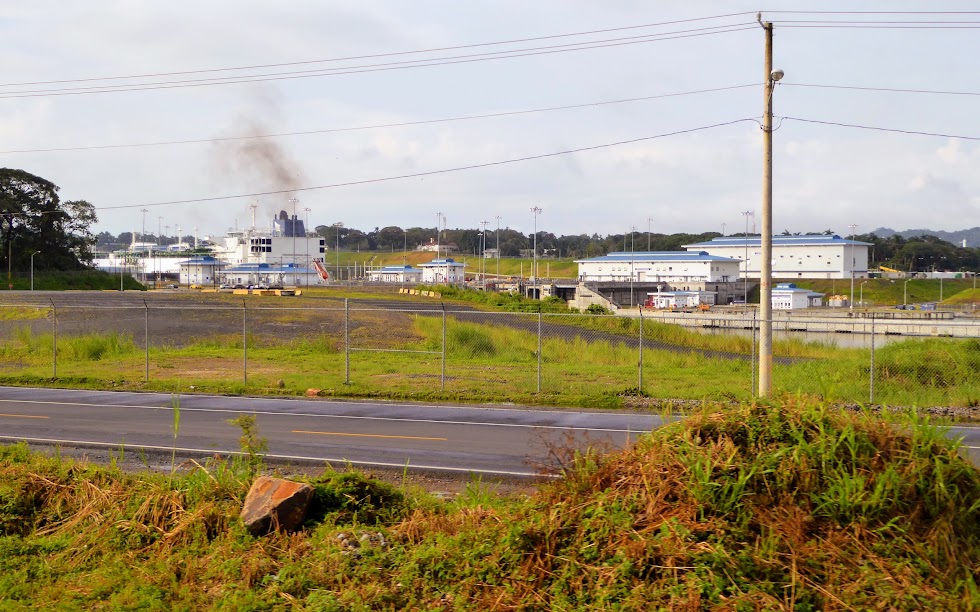 All to soon, we made our way closer to Colon, and approached the train yard where our ride would end. 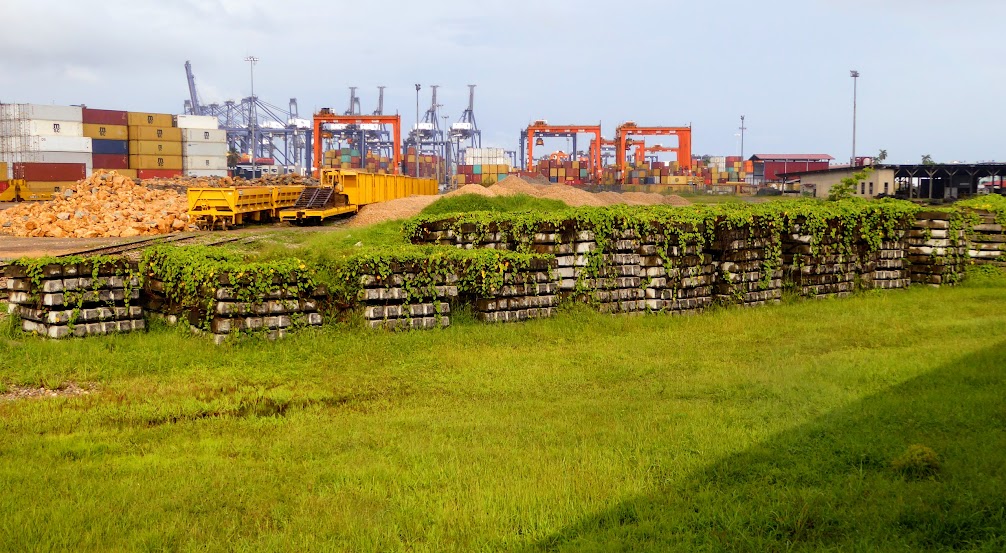 We hopped off, and went to hail a cab. Our ride back to Linton Bay took us right past some large grocery stores, so we stoped for some final provisioning before heading to the San Blas Islands. Our driver waited for us to shop, which was great (I think he killed two birds with one stone, as I saw him getting lunch at the deli inside), as hailing a cab in the congested area may have been challenging. As we loaded in our groceries, I enjoyed the smell of Christmas trees for sale outside the store. 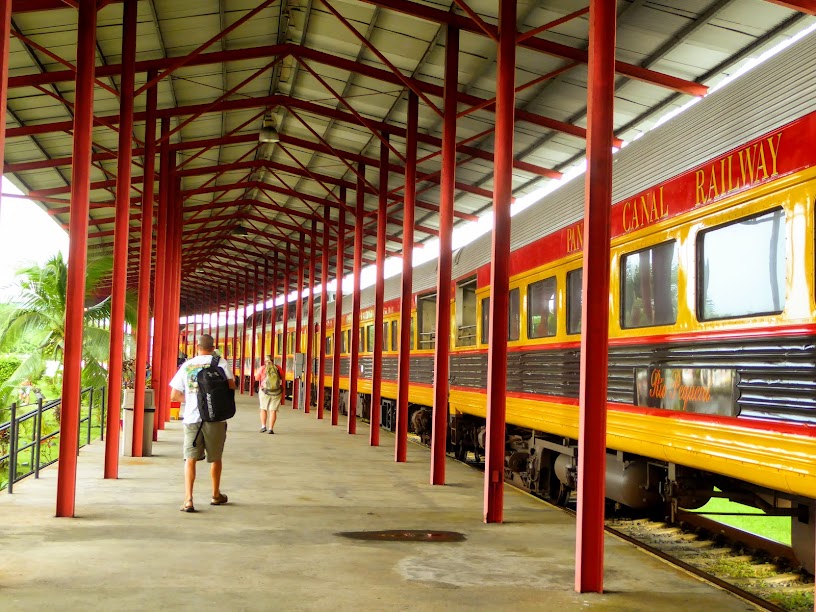 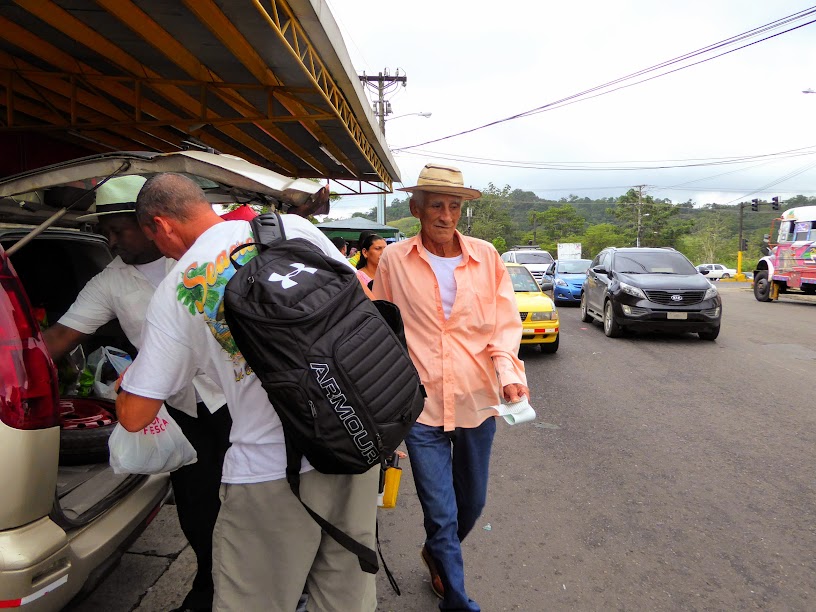 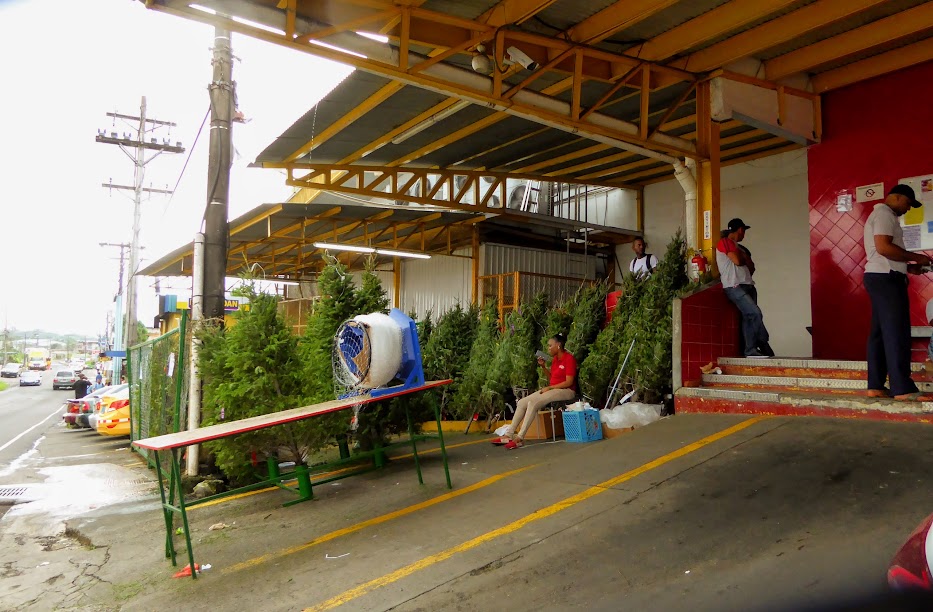 The drive from the grocery store to the marina was like an amusement park ride. It was clear that the driver wasn’t familiar with the roads, but that didn’t stop him from driving like crazy to get there, as he tested the limits of the cab’s brakes and steering. I was sure poor Scott was going to have permanent dents in his leg, from where I continually grabbed it in fear.

Thankfully, we arrived back at Linton Bay Marina in one piece. We unloaded our things, and told Howard all about our adventure. He was only interested in a full bowl of food, but we thought that train travel was pretty cool. Here are many, many more photos.