Because it was one of the most important ports on the route of their treasure fleet, the Spanish built several defensive forts in Portobelo. At one time, ten different fortifications were built on the hills behind the city’s port, making it the most heavily fortified Spanish coastal control point in the Americas.

We first visited Fort Santiago, which sits on the south side of the harbor. 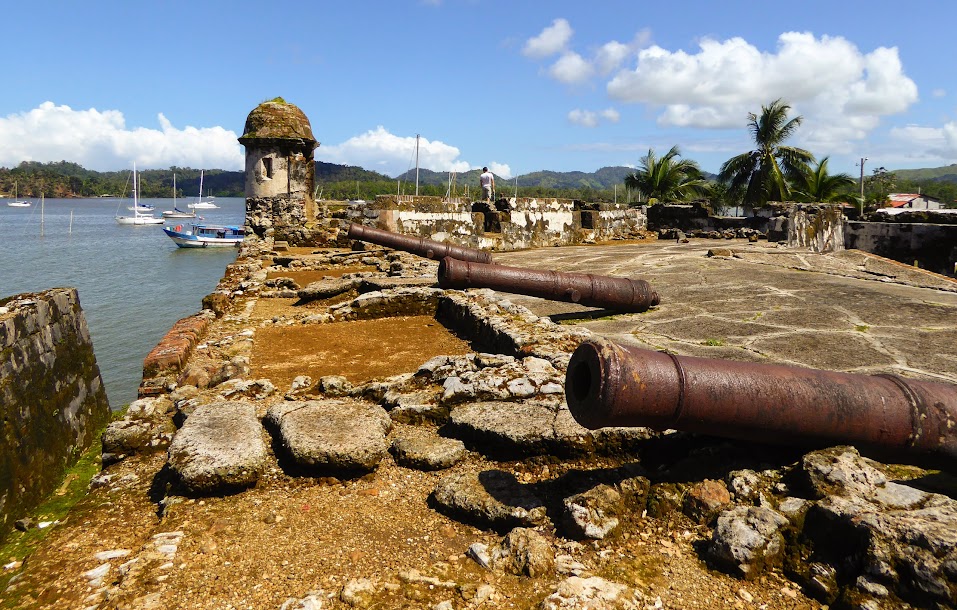 Houses now sit among part of the fort’s waterfront walls, and it’s upper battery, across the main road, is completely over grown. 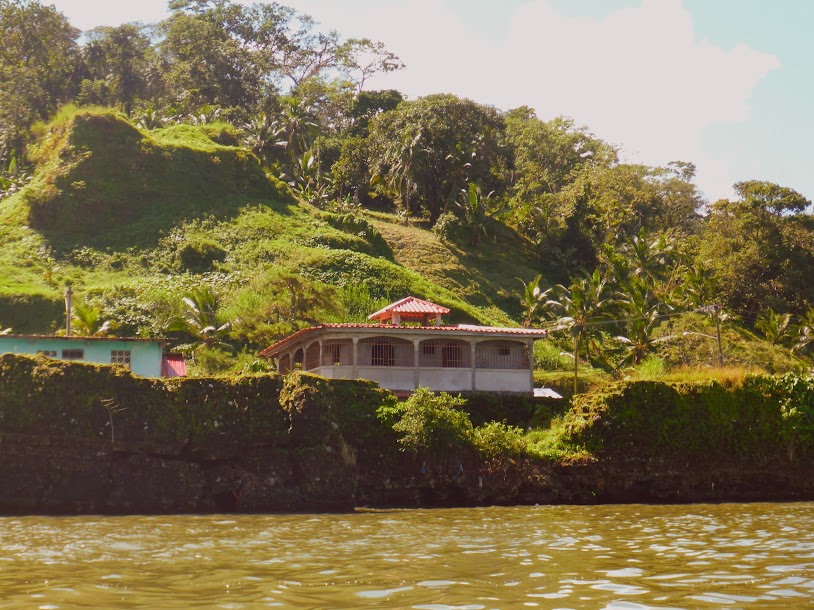 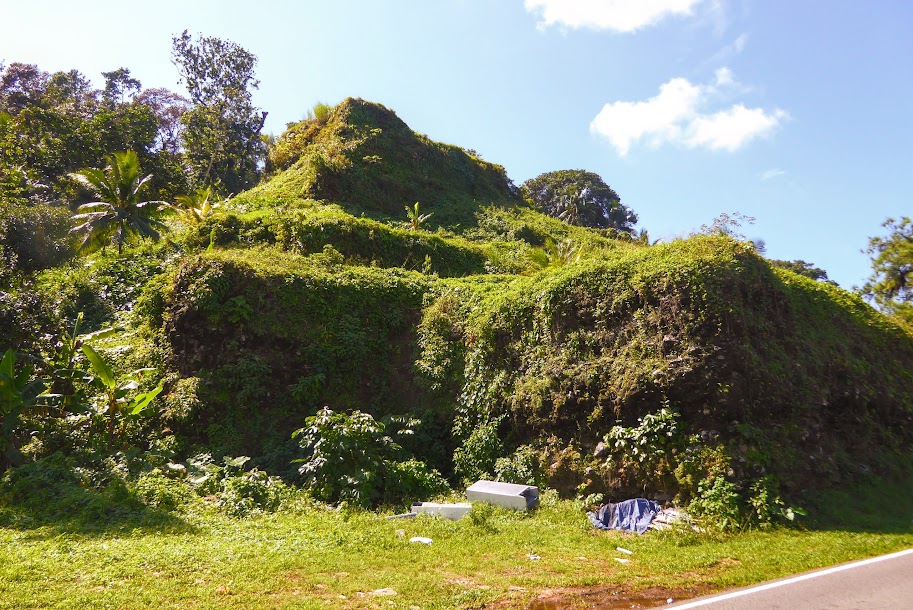 Men who built these forts were definitely shorter (and most Panamanians still are). Scott seemed giant, in front of a doorway. 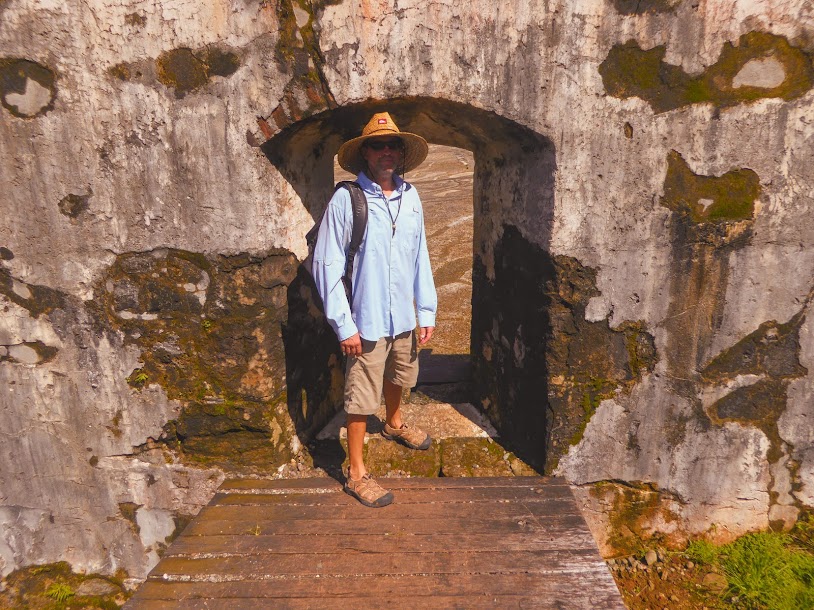 Our next stop was the custom house, located just off of the square in town. 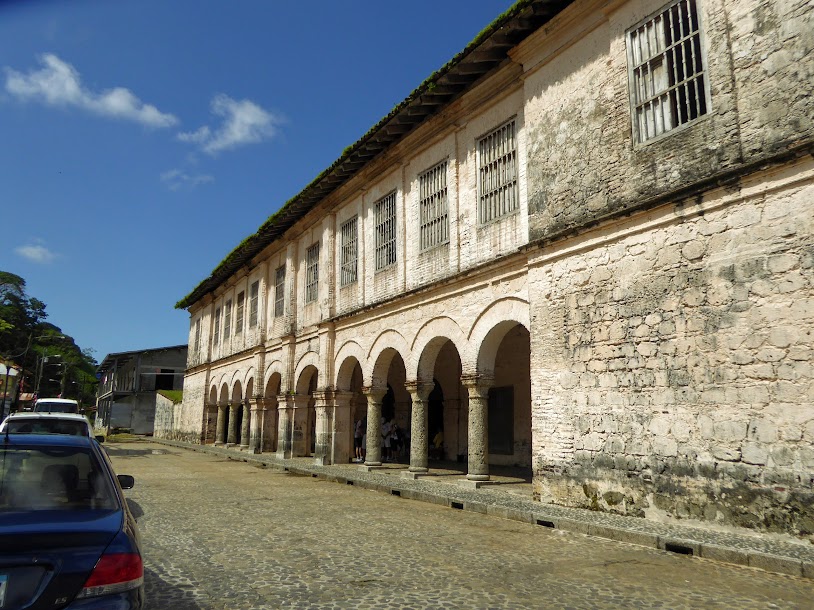 Built in 1630, it was the headquarters for all of the Spanish custom offices. Gold and silver from the Inca Empire was exported through this custom house, and countless African slaves were imported to the New World from here as well. This huge building was the scene of many large trade fairs, until it was bombed by English pirates. 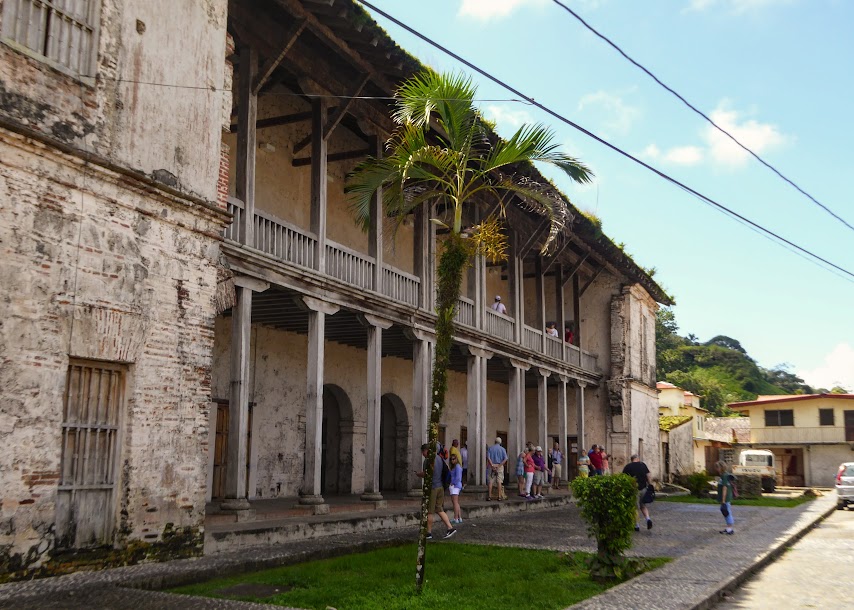 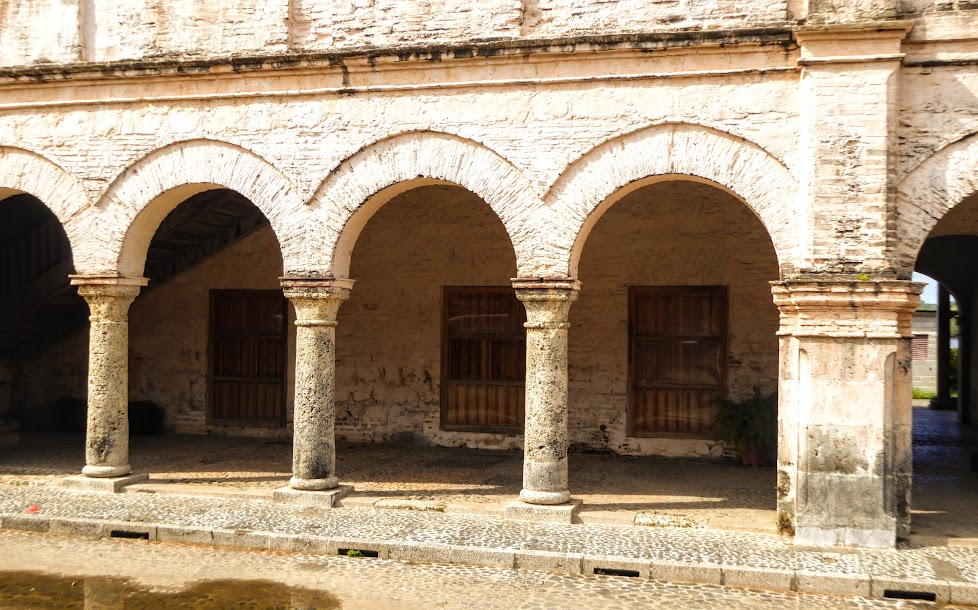 There was a small museum inside, with photos of the custom house in it’s heyday, in disrepair and before and after it’s reconstruction in the 1990’s. A display of period weaponry caught Scott’s eye. He especially liked this gun/hatchet thing. 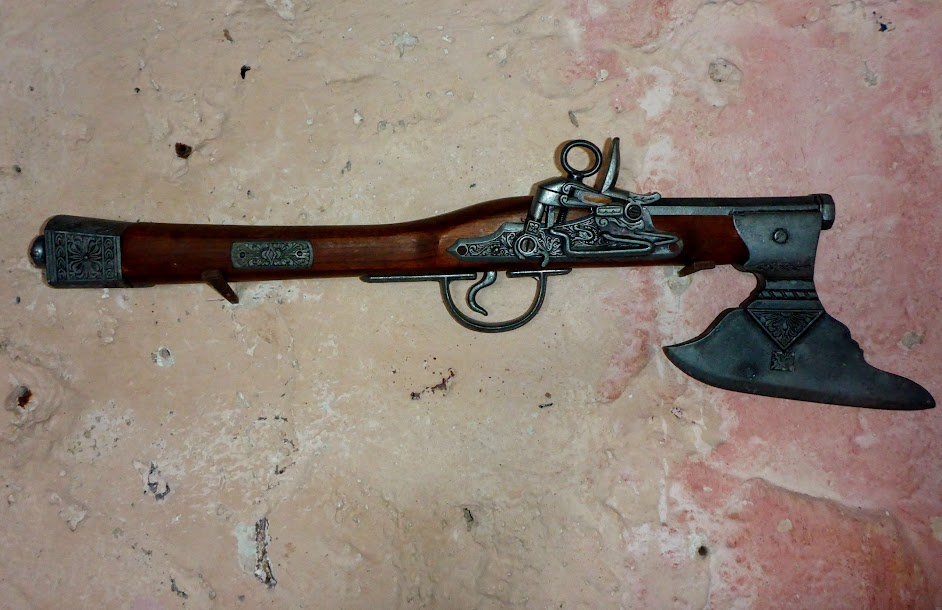 The next fort, San Jeronimo, is located just outside the custom house. 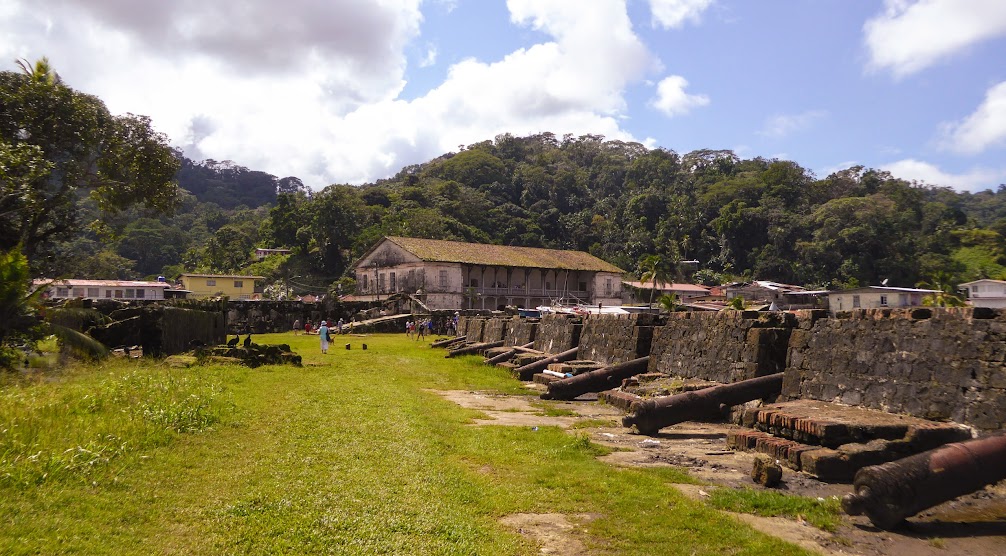 This fort is affected by high tide, and we had to slop through water and mud to get to the walls, and look out to the harbor. 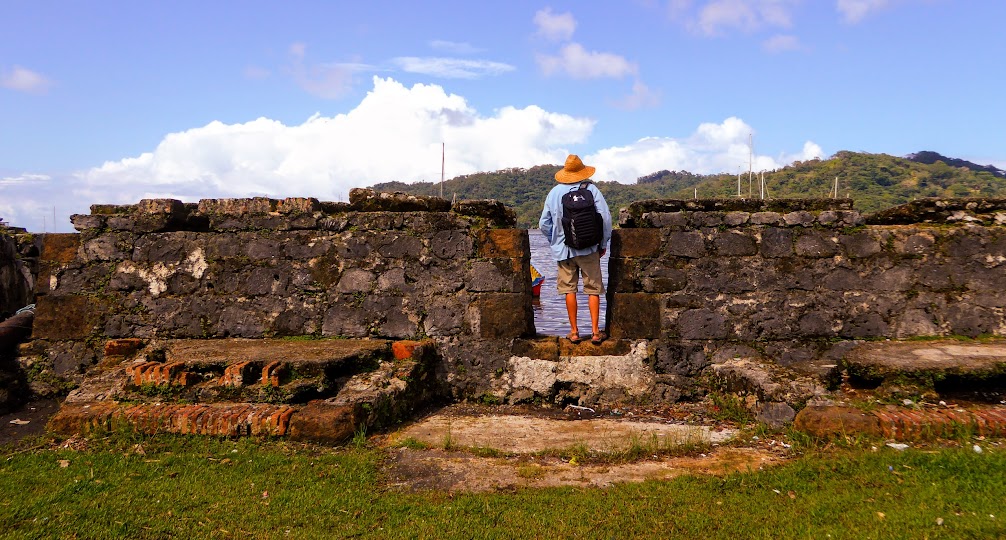 Several wrecked boats were visible from San Jeronimo’s walls. The most recent, from Hurriane Otto’s swells, still had people aboard, living life at a 45 degree angle. 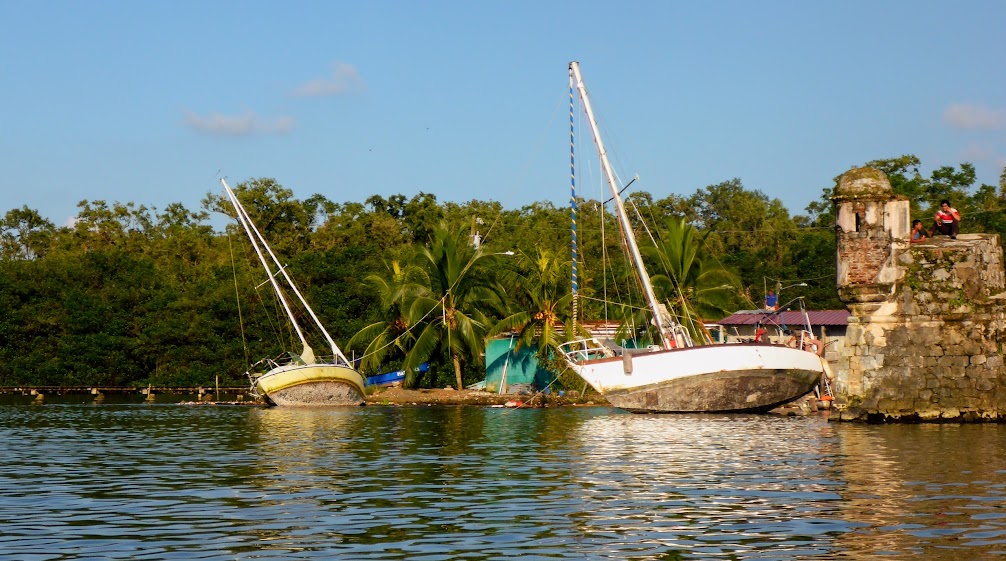 While wandering the grounds, we were entertained by a happy group of school children, who gathered just inside the fort to sing and dance for donations. 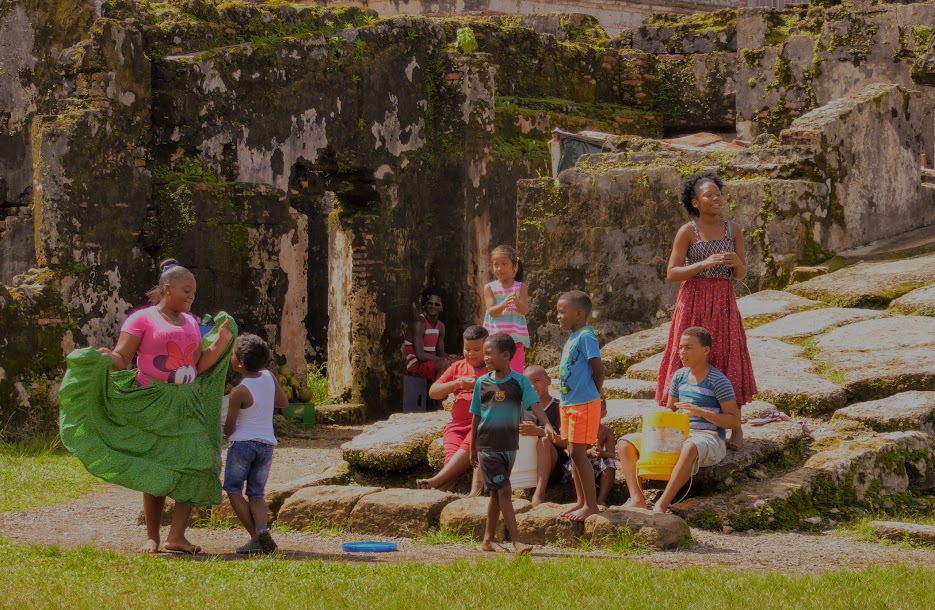 Lastly, Fort San Fernandino sits on the north side of the harbor,  just near where we were anchored. 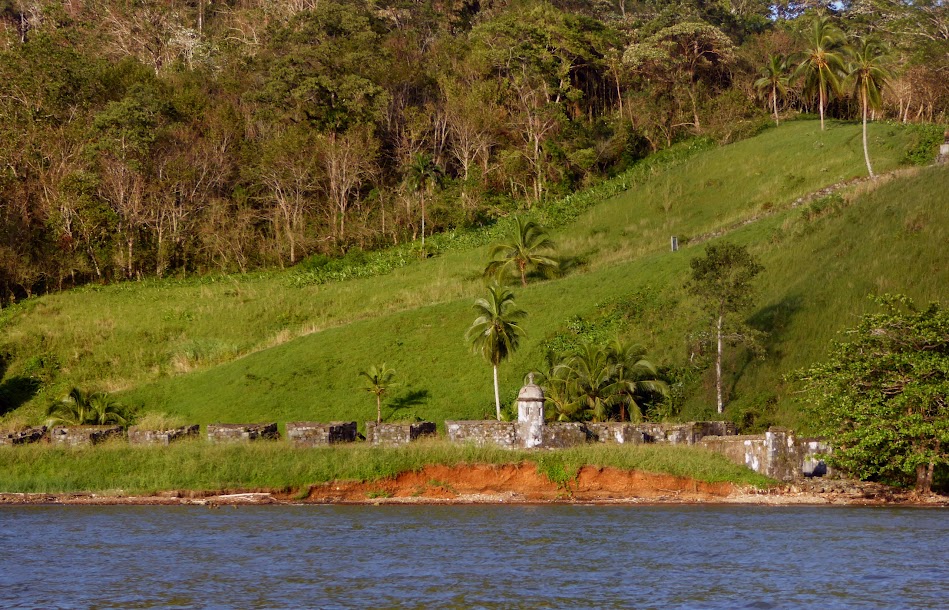 We beached our dinghy, and trekked through tall grass to the first battery level. There was a wobbly, narrow wooden board across the dry moat. I ran to the other side, Scott took his time. 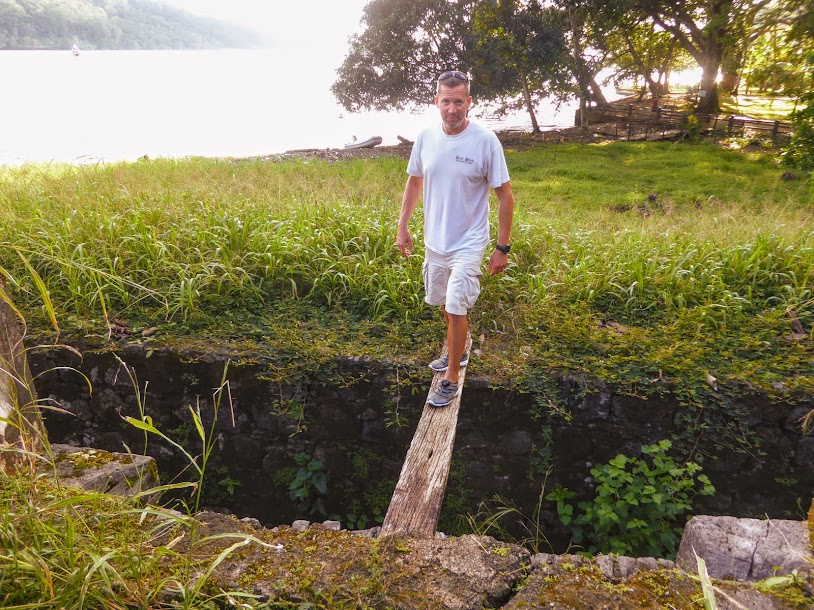 We traipsed around the lower battery level, wandering through stone doorways, around crumbling corners, and peeking through walls, back down at Sea Life below in the harbor. 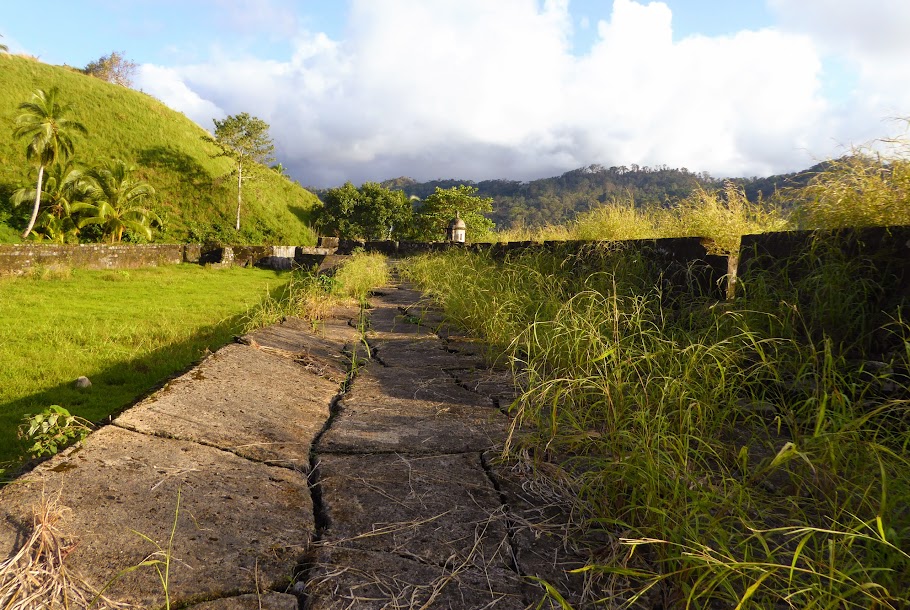 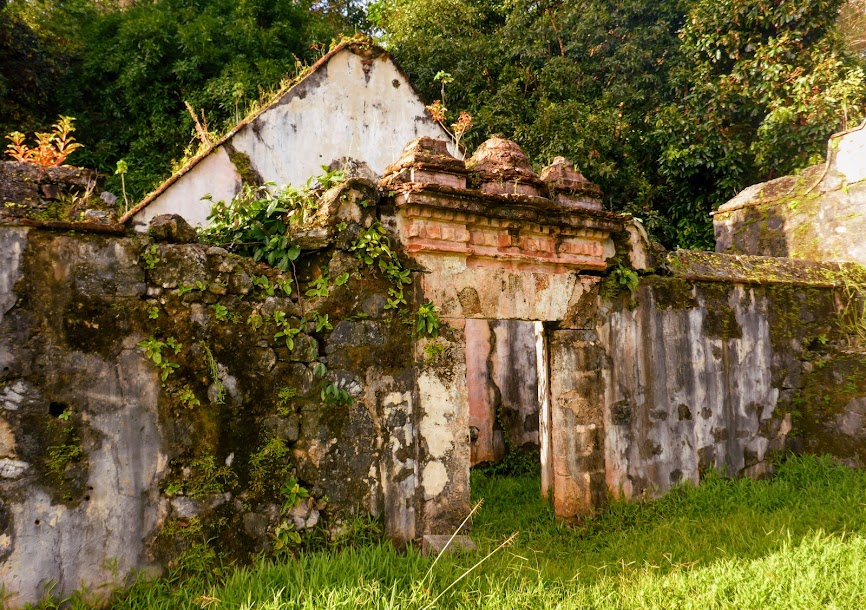 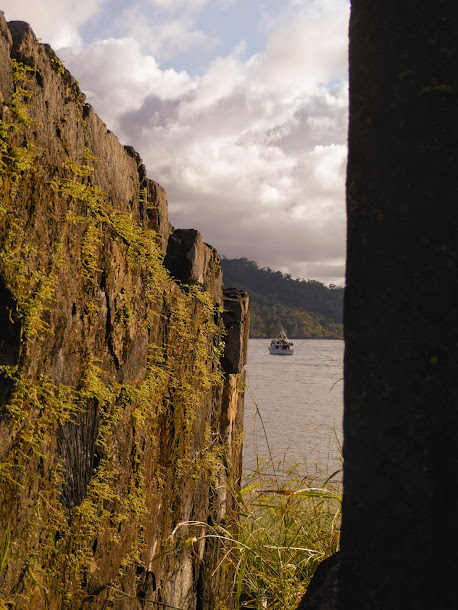 Next, we climbed a steep hill to the upper battery. The tall grass was full of burrs, that covered my shoes and pants. There were some set-in steps for part of the climb, but the remainder was just a foot path. 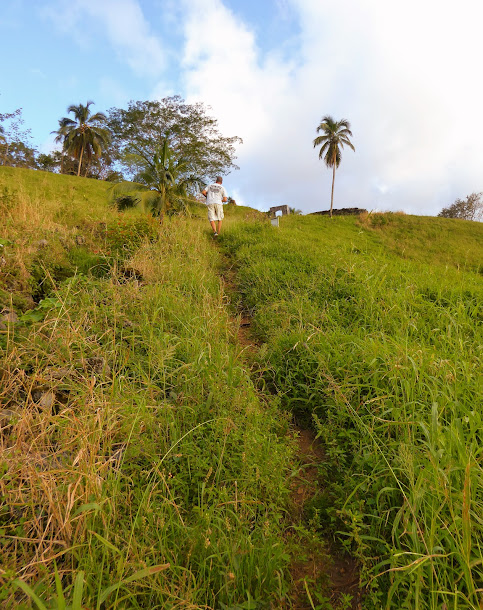 The views looking back at town and down to the harbor were even better at this level. 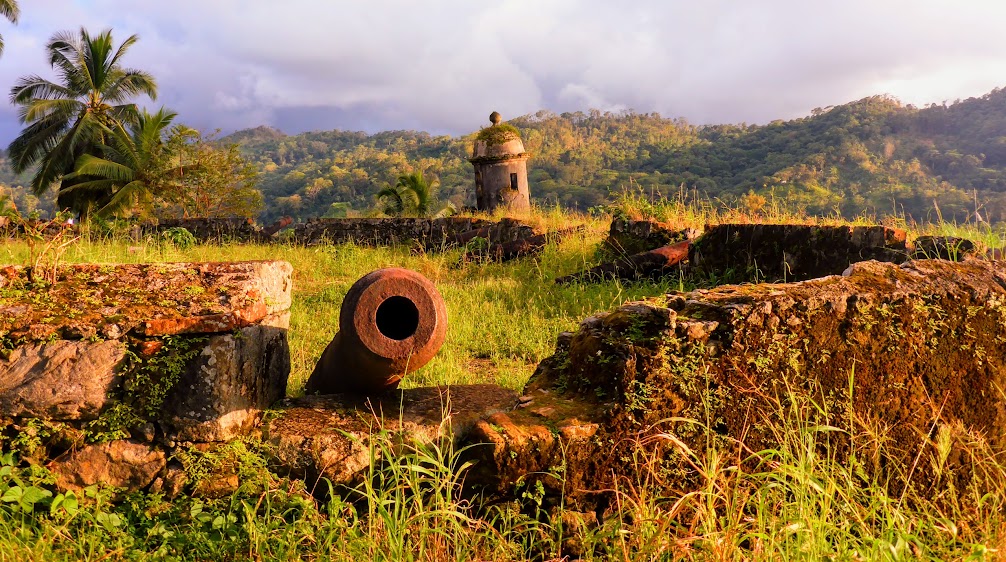 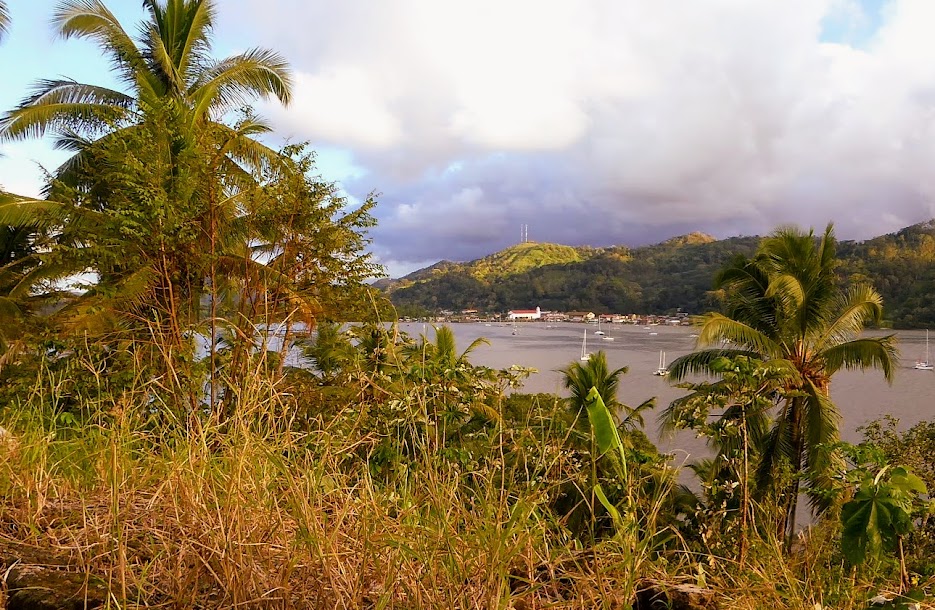 Scott noticed this small house-like structure, and had a peek inside. House-like was right, as in outhouse…the seat looked less than comfy! 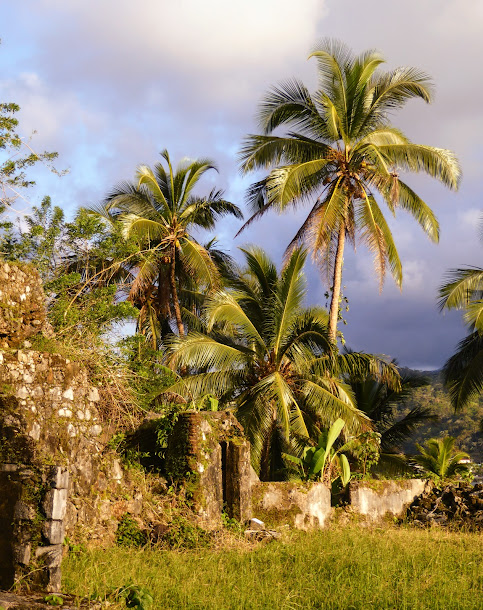 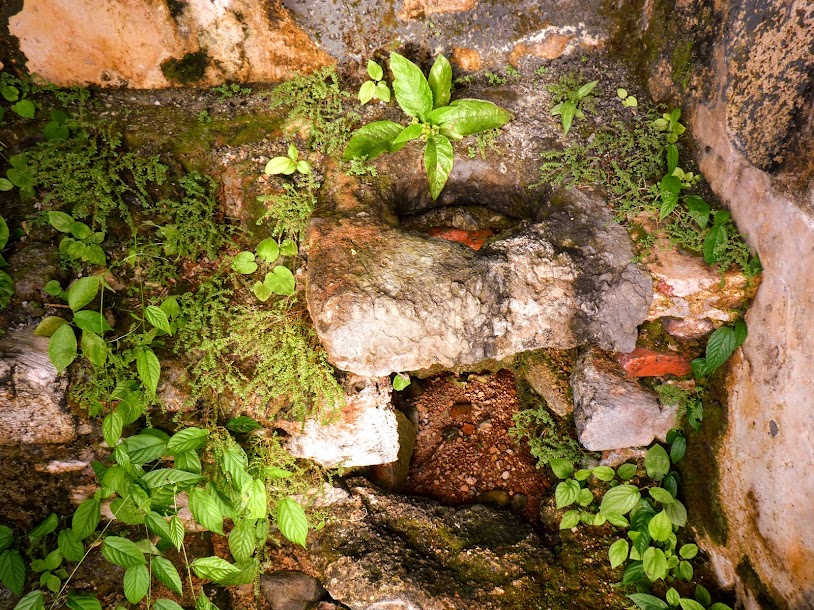 Further up the hill, there is another, smaller fort that was built to store gunpowder and oversee the battery. Scott climbed the path for a bit, but decided not to leave me waiting, and snapped some photos before coming back down. 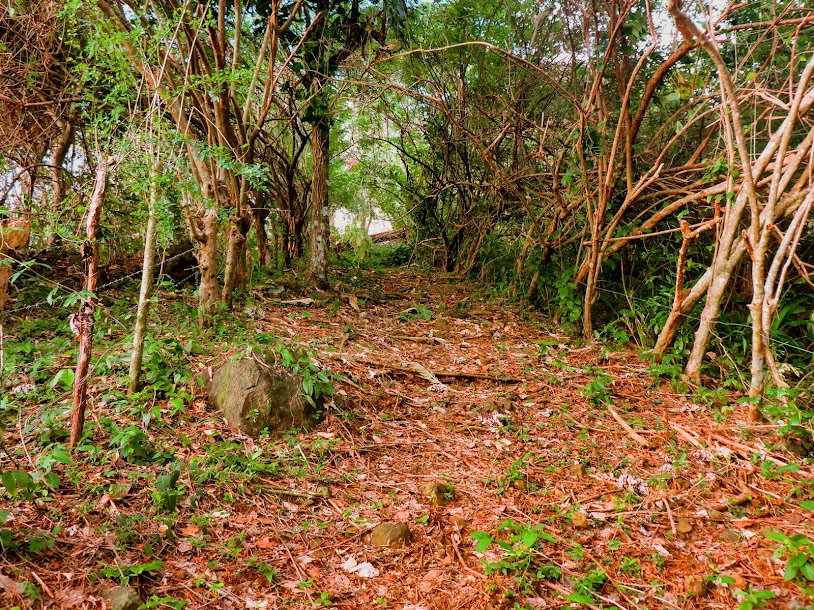 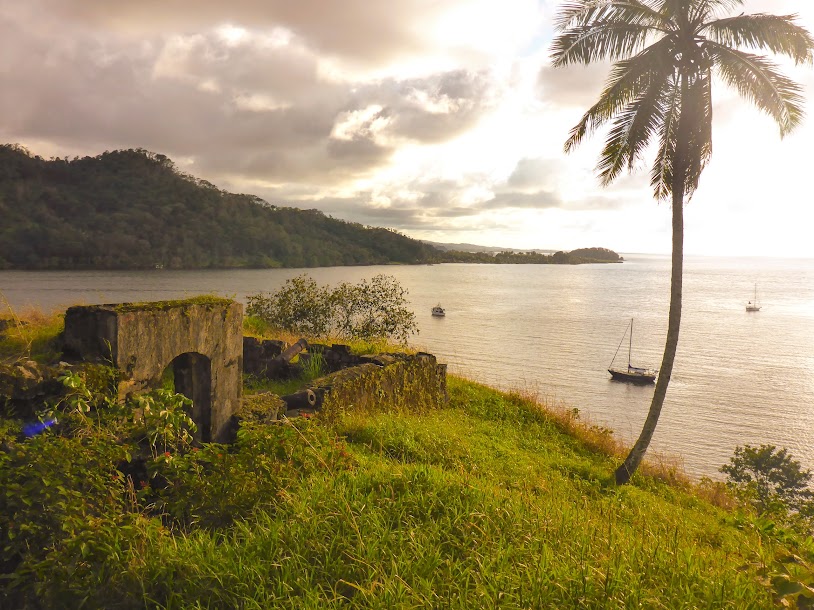 By the end of the eighteenth century, Portobelo’s boom ended. The Spanish switched from large fleets using few ports, to small fleets trading at a wide variety of locations, making them less vulnerable to attack. Ships also began traveling around Cape horn, to trade directly at ports on the western coast.

The city’s population revived briefly, during the construction of the Panama Canal. Today, Portobelo’s population is less than 5,000 residents, who now make a living fishing, farming or raising livestock.

After conquering all three forts and touring the custom house, we declared victory and headed back down the hill. It was happy hour, and Sea Life was waiting below at anchor. 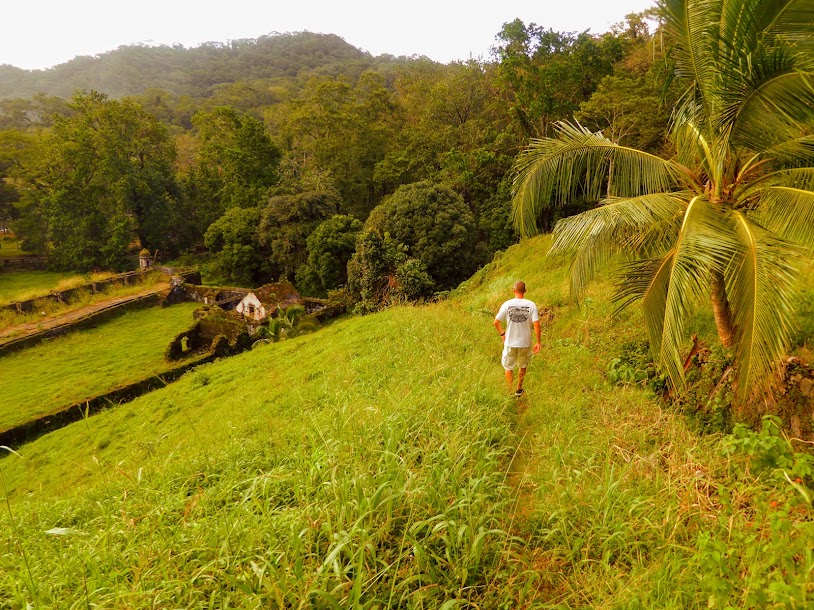 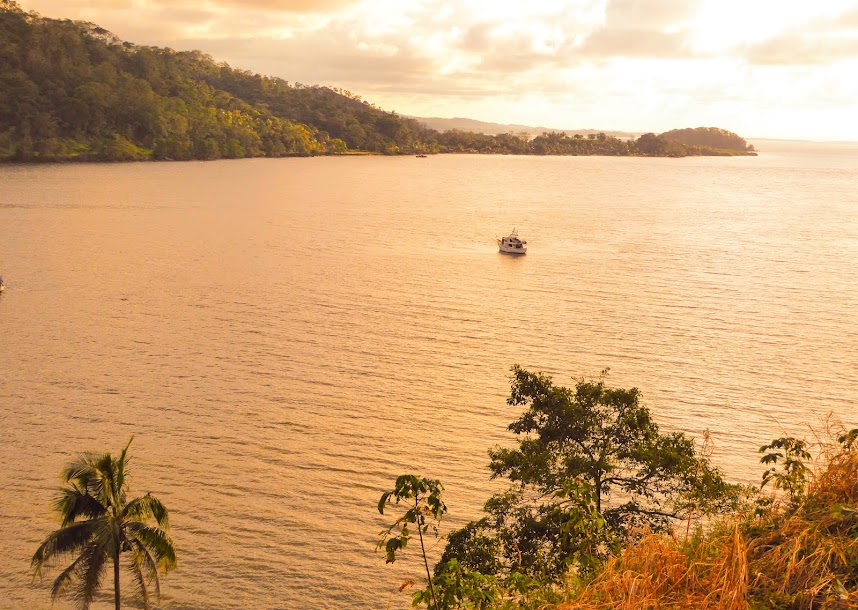 Here are many more fort photos.