The Albuquerque Cays lie 36 miles south, southwest of San Andres. It’s a 5-6 hour trip for us, and a nice way to break up our journey to Panama. The two small cays, surrounded by many reefs, are also owned by Colombia. One is used by commercial fisherman, and the other is a small base for the Colombian military.

The forecast called for little chance of squalls, low wind and relatively decent size swells. As we prepared to raise anchor, Scott noticed the skies ahead were a bit ominous. For the last few months, we’ve had multiple, instant downpours each day. Out of nowhere the wind will whip up, with sheets of rain right behind it. The downpours lasts for 1-3 minutes, and then the skies clear as fast as they darkened, so Scott wasn’t concerned as we raised anchor and headed toward the channel.

Of course, this rain decided to linger. For the next 30 minutes, as we maneuvered through the channel, staying to one side to allow room for an incoming freighter, the rain poured so hard we could no longer see the anchorage behind us or the horizon in front of us. The winds kicked up to almost 30 knots, filling the harbor with white caps and giving us a good roll. This made putting the paravanes out challenging, as the winds threatened to push us into shallow water (we come to idle to put the birds in).

We entertained the idea of throwing out the anchor, and waiting for the weather to pass, but decided just to slog on. The winds eventually slowed, but the rain continued at a steady pace; thanks for the send off, San Andres! By the look of our radar screen, we worried that there was a squall headed our way, but fortunately the big red blob broke up as it approached us, and we were just in for a lot of steady rain. 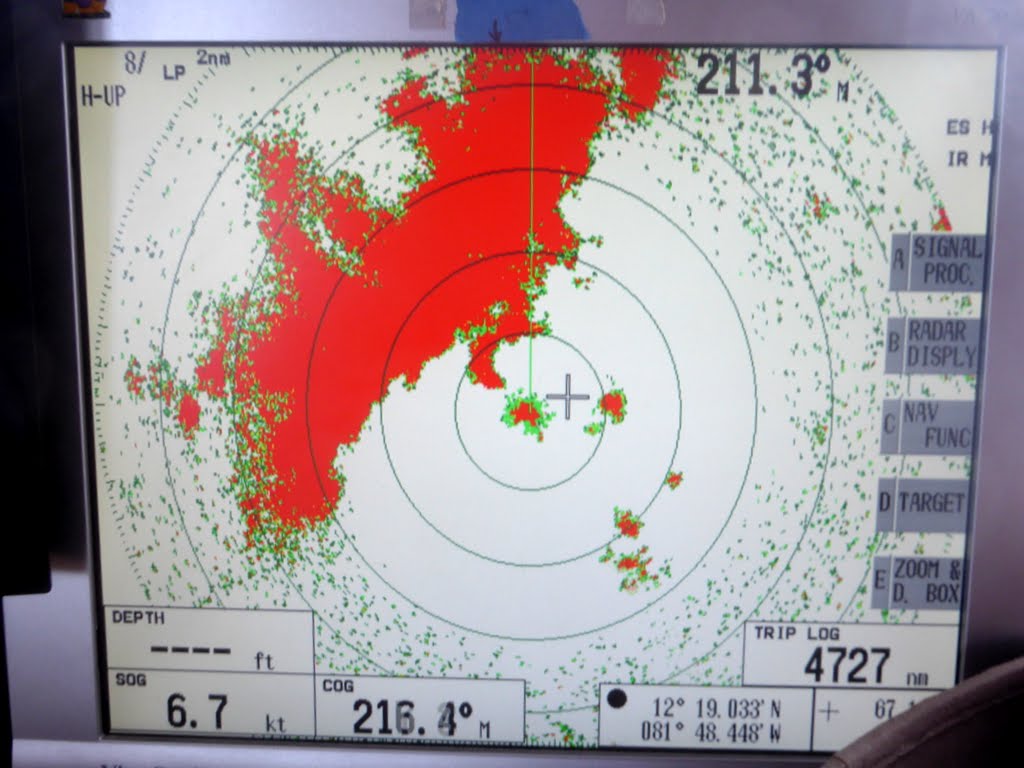 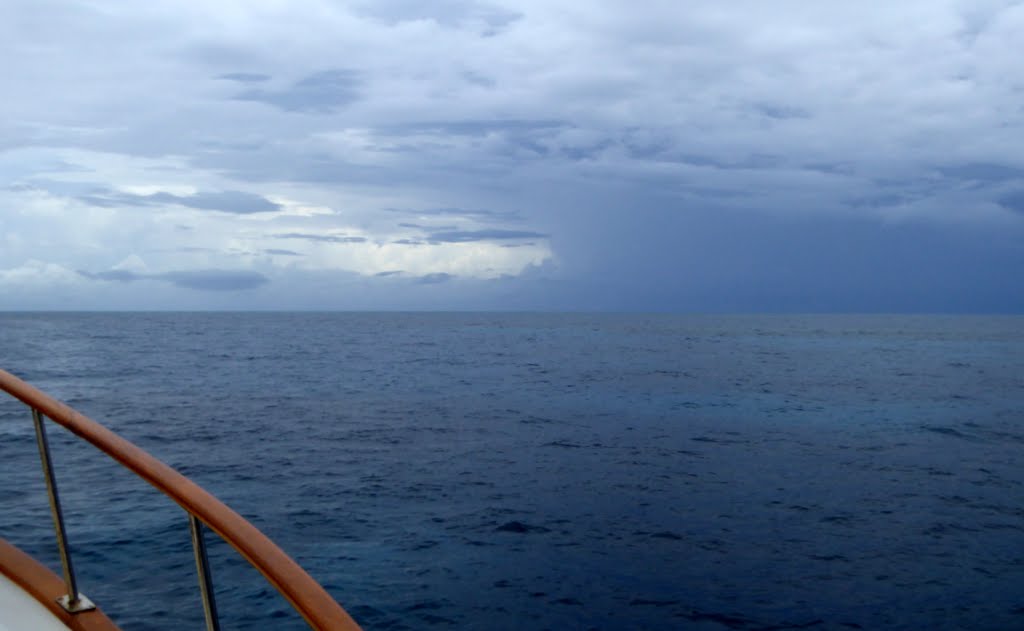 After the heavy rain ended and the swells calmed, it remained cloudy all the way to the Albuquerques. We’d planned to arrive in the early afternoon, with the sun high overhead to help see any coral below the surface. The completely overcast skies made navigating through the reef more challenging than normal.

Scott has literally thousands of hours on the water, and is excellent at reading it. Me….nada. He’s had similar time and experience behind the wheel, and can make decisions on course adjustment in a blink. Again, me…not so much. If the sun had been shining, the plan was for me to be out on the bow as we approached the reef, so Scott could steer (Sea Life doesn’t turn instantly, so there’s a learning curve that I’m still working on).

As we approached, the skies brightened a bit, but the sun just wouldn’t pop out. The cloudy skies made it much harder for either of us to see possible coral heads, especially when we couldn’t agree on what was dark blue, or dark blue-green. Luckily, Scott had some way points from our friend Kevin, who’d come through the week before (charts for the area are terribly inaccurate), and we used them to feel our way through the reef. Once safely inside, we could admire the beautiful view! 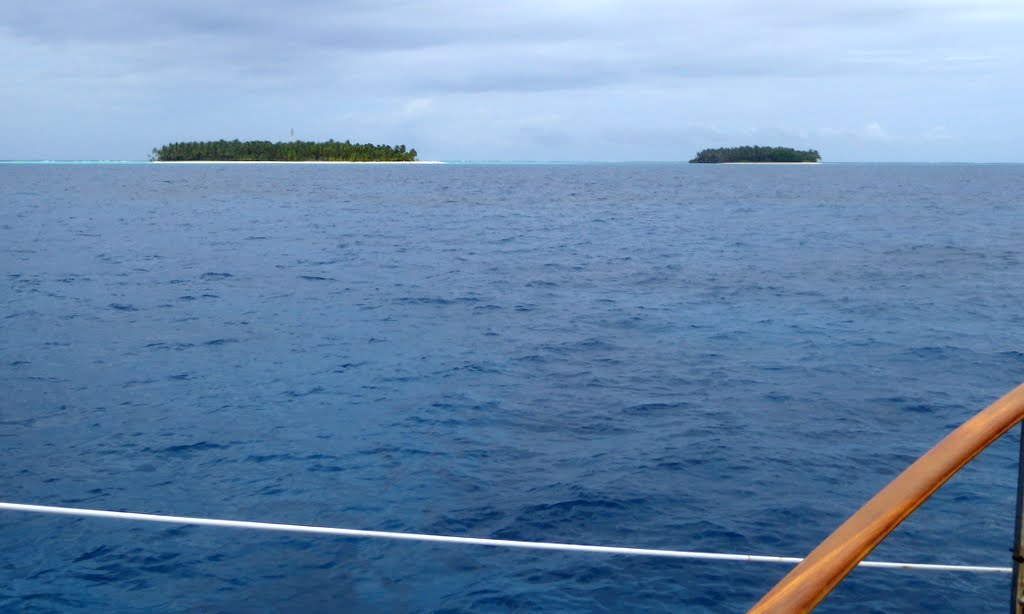 As we were deciding where to drop anchor, the military hailed us on the vhf…in Spanish. Scott replied in English, which usually clues someone to reply the same (most port captains, military, etc. speak enough English to get their point across), but they came back in Spanish again. Scott then replied that he didn’t understand…more Spanish.

Luckily, the only other boat anchored in the area was Kalea, who’d been near us in the Providencia anchorage. Iris speaks Spanish, thank goodness, and relayed that we were being asked to anchor closer to the island. Once anchored, we were expected to come ashore with our passports and paperwork from San Andres.

This was different from what we’d heard about the Albequerque Cays. People have told us the military doesn’t really “check” you in, at most they may swim over to your boat just to make contact. However, we weren’t interested in making enemies with any part of the Colombian military, so if they were requesting us to go ashore, that’s what we would do (We’re not really sure why there is a military presence here, there’s certainly no “threat” of any kind. It’s more likely a pride thing, rubbing the fact that these cays are Colombian owned into nearby Nicaragua’s face).

The entire time we anchored and Scott made sure we were set, and then put the dingy in the water, we were being watched by five men standing amide the palm trees at the edge of the beach. One was dressed in camouflage, and carried an AK-47 assault rifle, while the rest wore t-shirts and shorts. The men appeared to be in their mid twenties, at most, and the whole scene gave off a weird “Lord of the Flies” vibe.

Scott made his way to shore and beached the dinghy (with no help from said five “Flies” men). 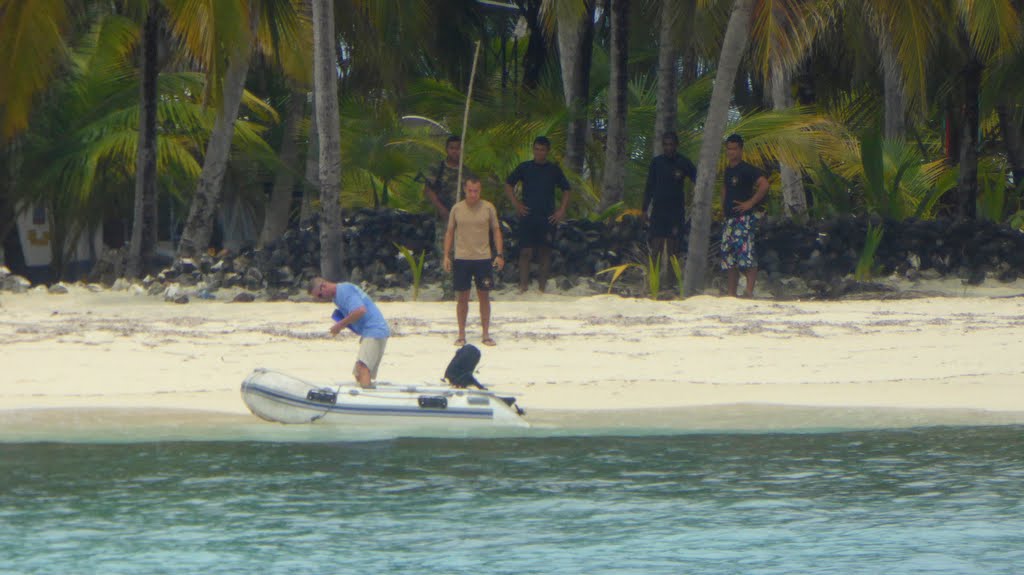 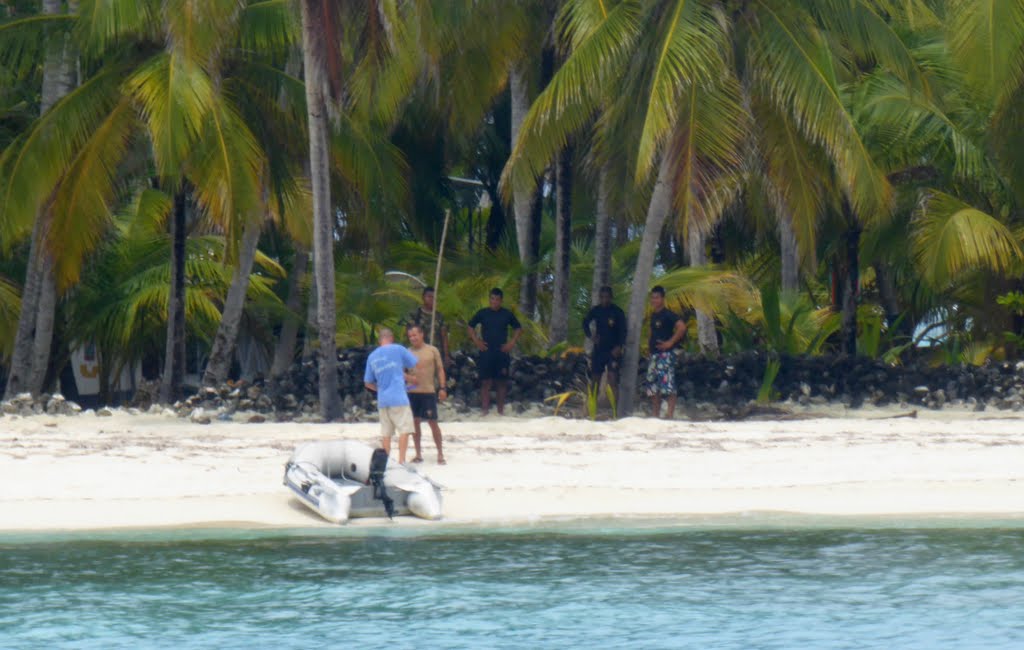 Anderson, who seemed to be the “commandant” of the group, and the oldest (Fly), pulled out a crumpled piece of scrap paper and copied down information from our passports and paperwork. They asked how long we were staying, and Scott wanted to tell them maybe four days, maybe a week, but with his limited Spanish and their complete lack of English, communication was difficult. 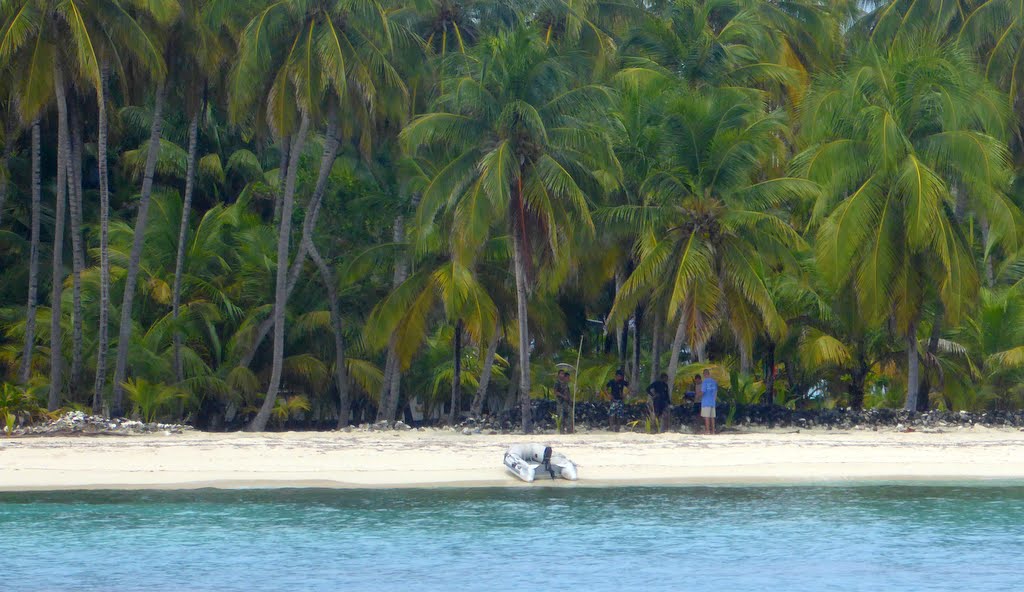 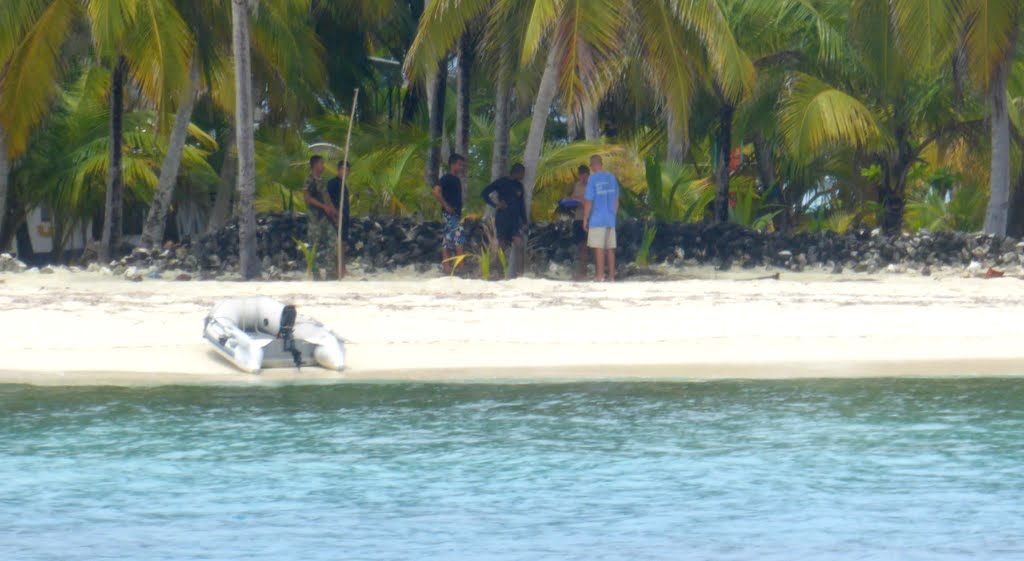 Just to make sure all was clearly understood. Scott later took a letter back, that he’d written using our English/Spanish dictionary (thank you John and Lela, s/v Yachtsman’s Dream!). I’m sure it read like something written by a five year old, but the intent was understood.

Now that we were anchored, and “cleared in,” Scott got right to exploring in the rubber dinghy, putting together his plan of attack for fishing in the coming days. As he was getting comfortable on the bow, with his evening “sun-downer” in hand, he noticed the “Flies” waving him over. Having no idea what this was about, he again made his way to shore. He left his drink behind, but sadly, I couldn’t convince him to change into a shirt with sleeves.

After almost 30 minutes I looked to shore, and could see no sight of Scott, our dingy or the Flies. I began to panic, envisioning Scott being beaten to death, in typical Lord of the Flies style. I scanned the horizon with binoculars, with no luck. Finally, as I scanned behind us, I caught sight of this: 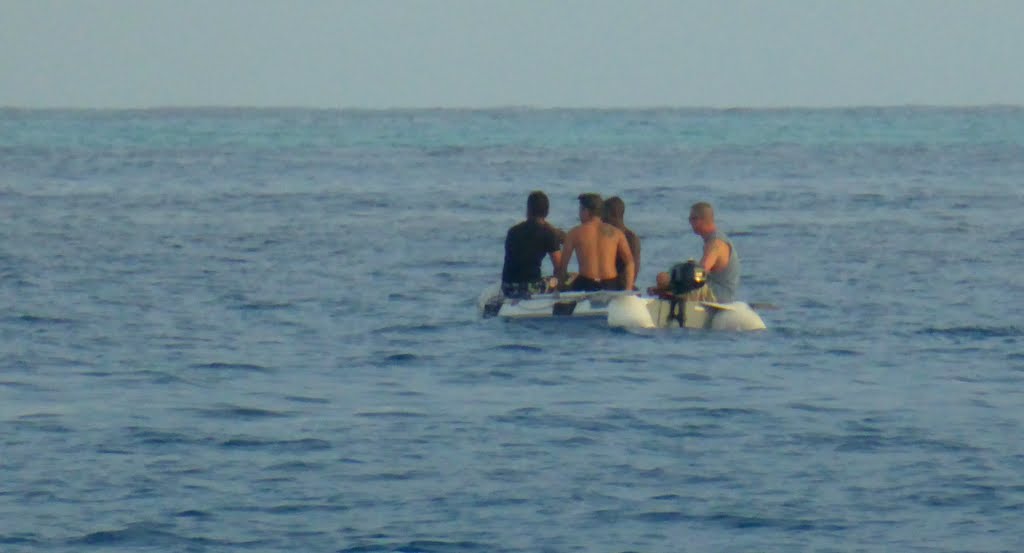 Once Scott had arrived onshore the Flies handed him their own translated letter. It seems they wanted to borrow our dinghy and Scott’s spear, to go fishing. Scott told them that if they wanted to fish, he’d be happy to take them, but they’d have to use their own means of catching the fish. The men agreed, and off they went. 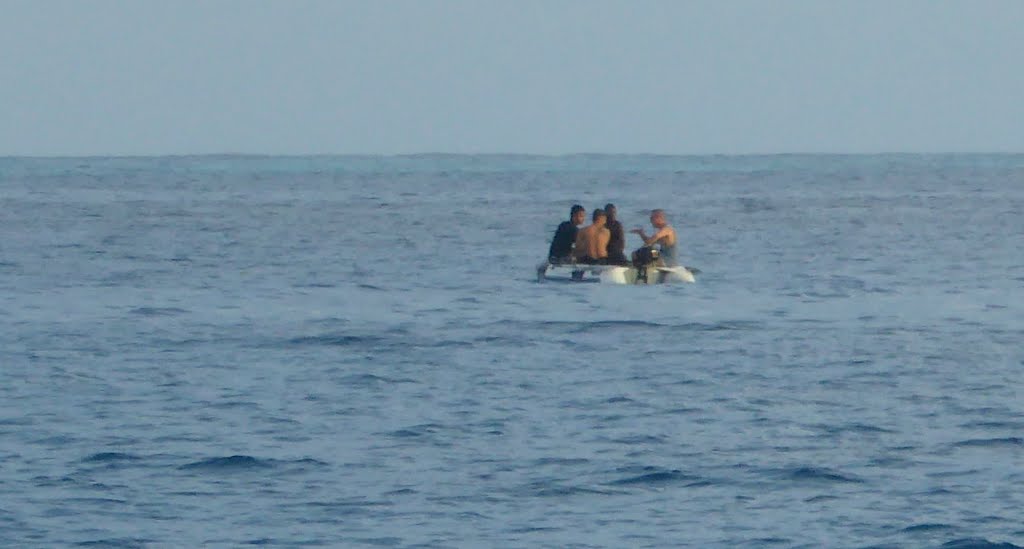 There were many one word and hand-signaled conversations. At one point, Scott was asked to go faster. He explained to them that our little two horsepower motor could go no faster, and to try would result in them rowing back to shore. The Flies then pointed toward the Aluminum Princess, asking how fast it went. Scott acted like he didn’t understand that one.

They made a stop at the island which is used by the commercial fisherman. Scott noticed a five gallon bucket, full of large lobster tails. He’d relayed to the Flies earlier, that he wanted to catch lobster while here in the cays, and was sure that they understood.

As they now smiled and pointed to the contents of the bucket, Scott hoped that he might get one or two as a thank you….no dice. The Flies chatted with the fisherman a bit, one of whom spoke very good English (Scott wondered why Anderson didn’t use this man as an interpreter…or a teacher), before climbing back in the dinghy.

Eventually, the Flies asked to return to the island, where they continued to line fish from the beach. 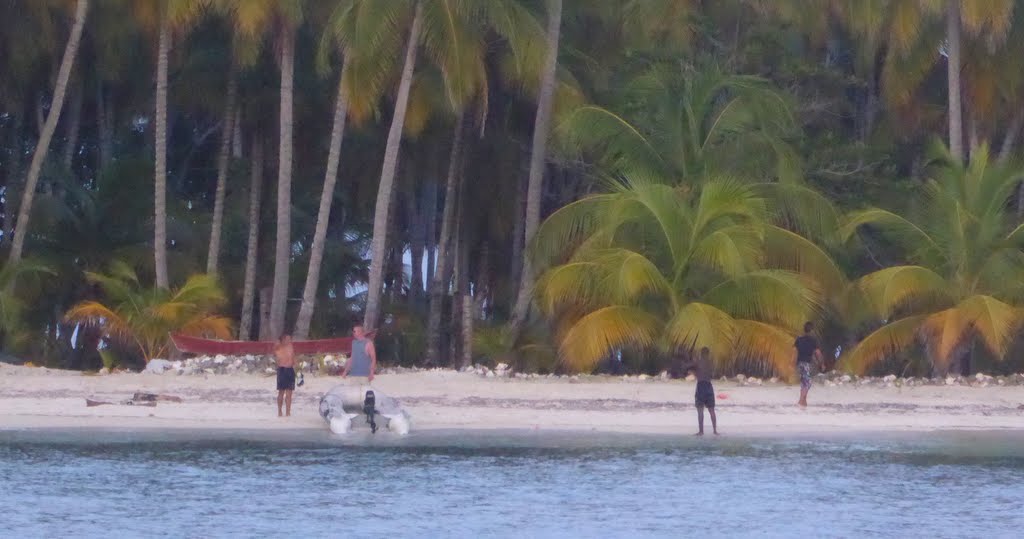 Anderson asked Scott to stay awhile. He replied, using his best hand gestures, that it was time to eat with his wife and then go to bed. 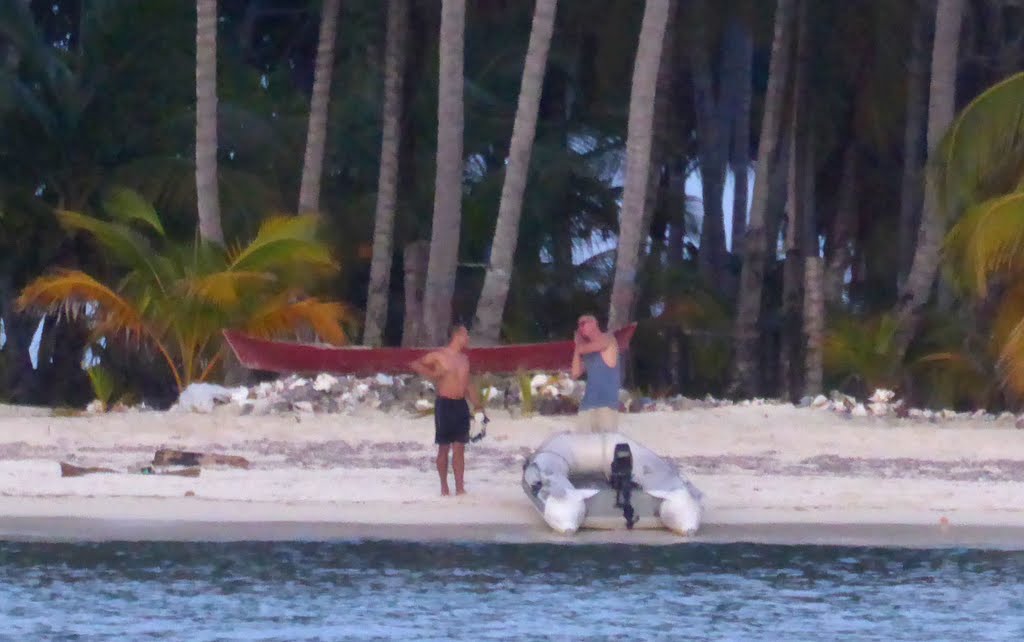 After Scott’s little adventure, we felt that it was safe to say the Flies approved of us. It was time to relax and enjoy our beautiful surroundings. 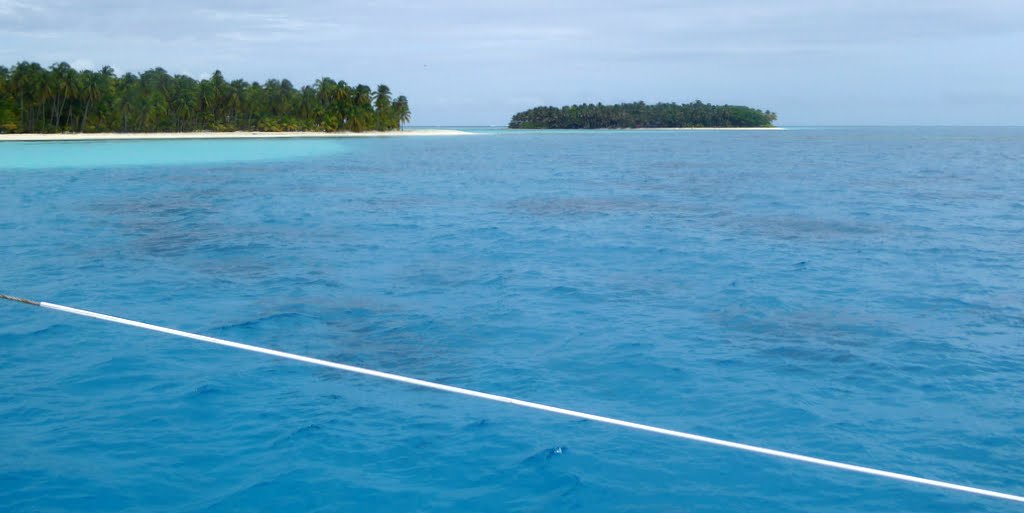 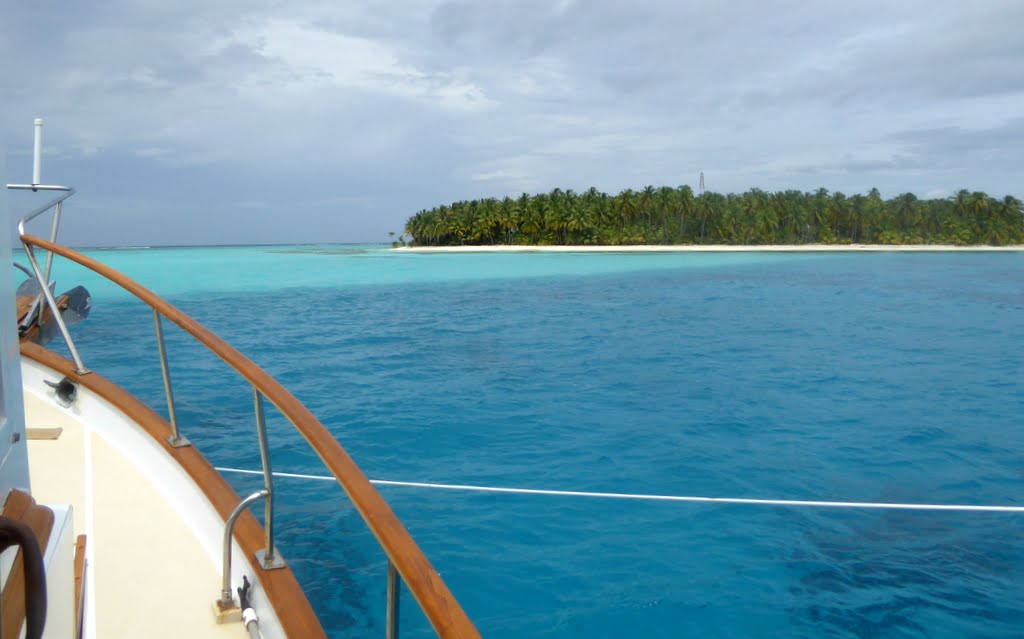