During our days anchored near Great Bird Island, Scott again found himself with a drink in hand and time to kill. Settled up on the flybridge, he surveyed his surroundings, and as is usual in this situation, the wheels began to turn. Before long he was back inside the boat, rummaging in the storage compartments under our master berth.

Me: “What are you doing?!?” (in response to the rummaging)

Scott: “I have an idea.” (more rummaging)

Me: “Good Lord…what is it?” (imagining the many possible outcomes from this current idea)

He passed by me in the saloon, carrying several spray paint cans, and headed back up to the flybridge. I still had no idea what he was up to, and hoped it was not cause for concern….or, a marital “conversation.”

As we traveled the Western Caribbean, there was much round and round about Scott’s idea to spray-paint rust stains down either side of Sea Life, in hopes of making her less appealing to possible theft or attack. I’d stood firm against this “creative” idea. Although I appreciated Scott’s thought for our safety, I felt that marinas, and most future cruising friends would find us equally less appealing.

I went back to whatever I was doing, and before long Scott reappeared, asking me to come see what he’d done. His huge smile had me a bit apprehensive, as I followed him up to the flybride. At the top of the ladder, I followed his proud gaze…over to the Aluminum Princess, who undergone yet another transformation. This latest look was quite different from her past structural changes: 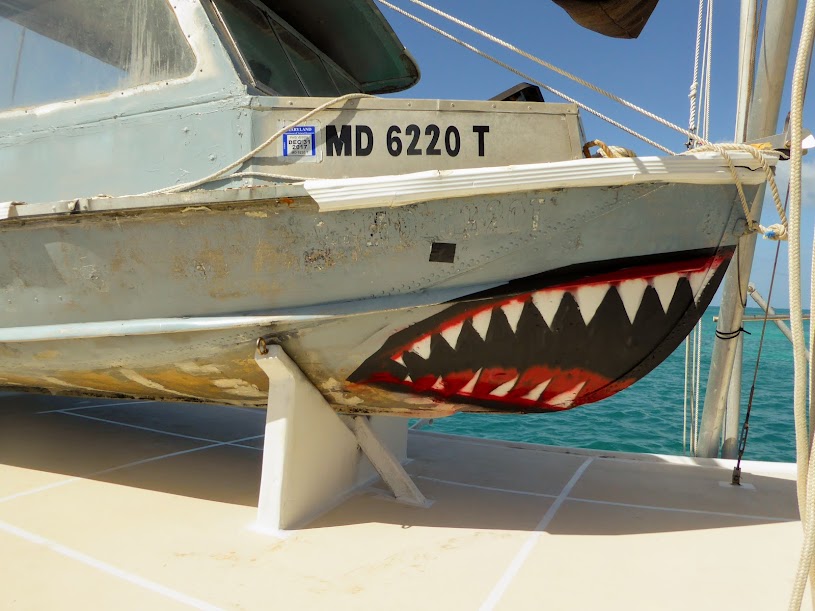 I actually felt a bit of pity for the poor boat. It was as if a younger sibling, not old enough to protest, or too enamored, had allowed their older sibling to cut their hair…or maybe dye it in this case. 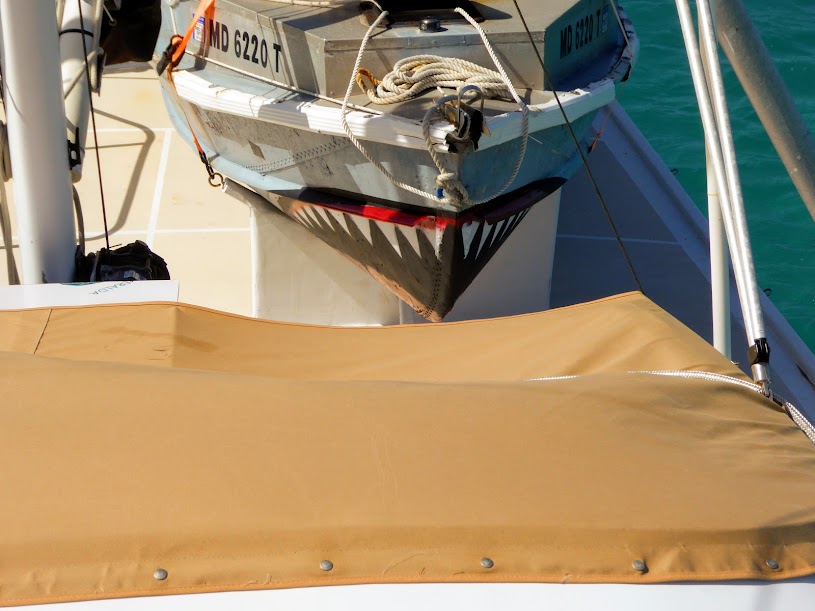 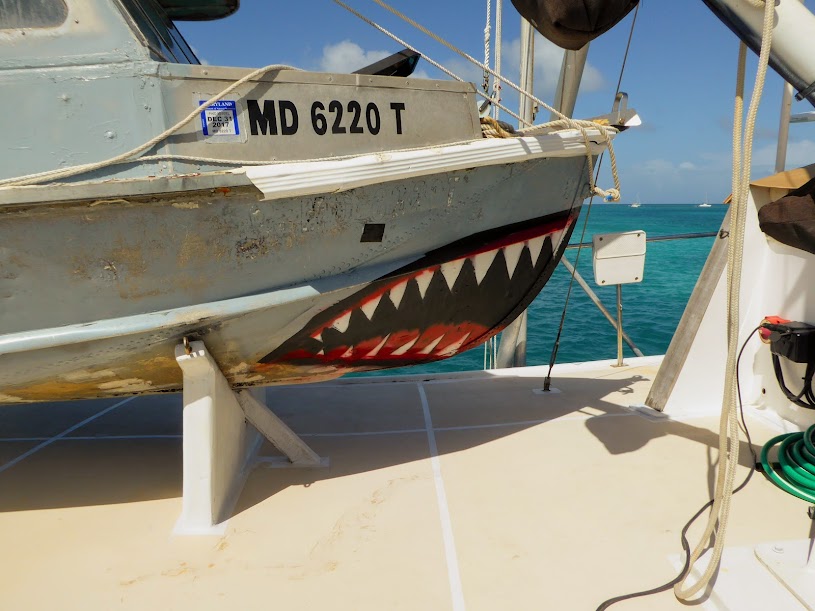 Scott was pleased as punch with himself, and his boat’s new appearance; the result of spontaneous, artistic genius. I was informed that we would be lowering her into the water to debut the new look. Once she was floating, I was to ready the camera for in-water video footage, and a photo shoot.

As the boat sped back and forth around the mother ship, I snapped photos. 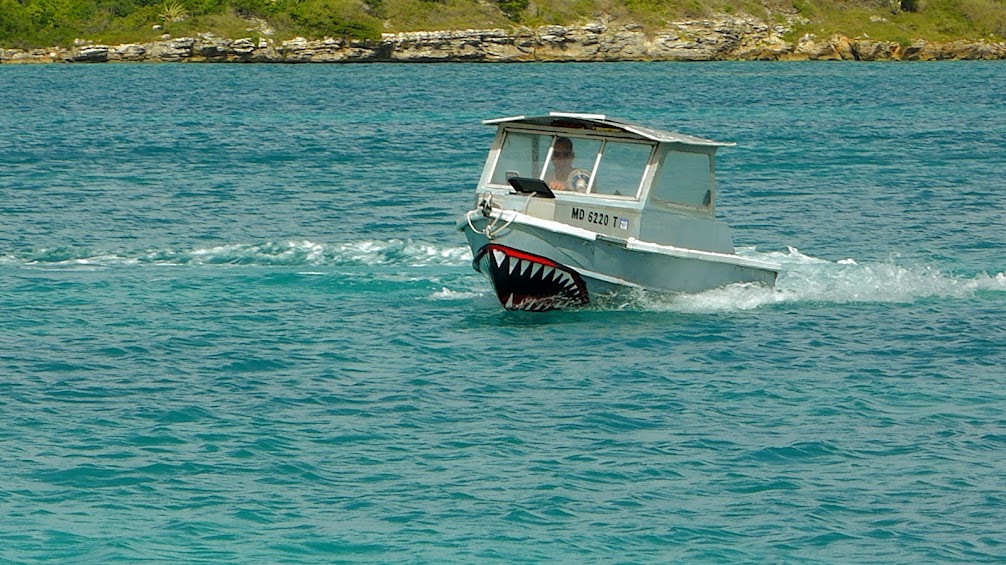 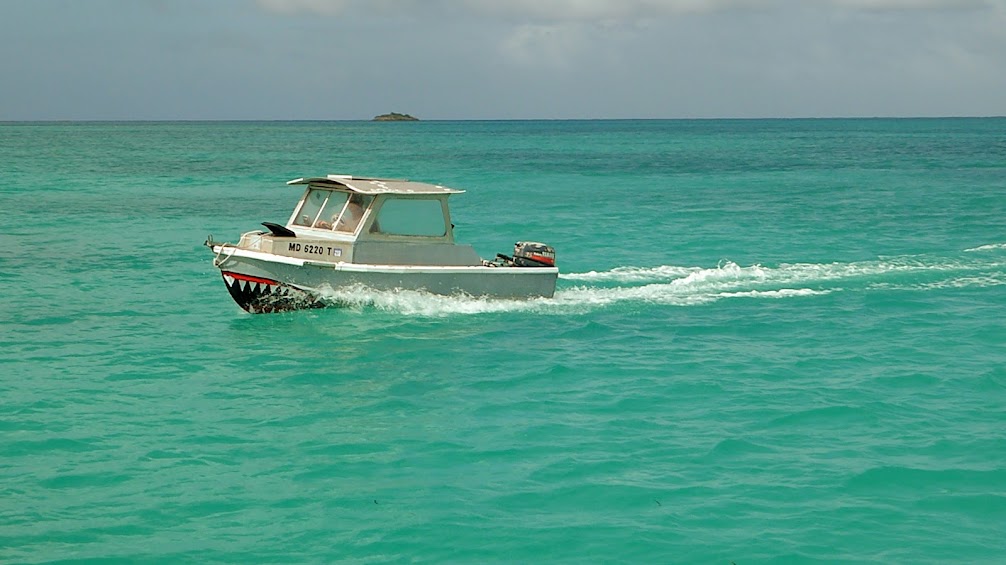 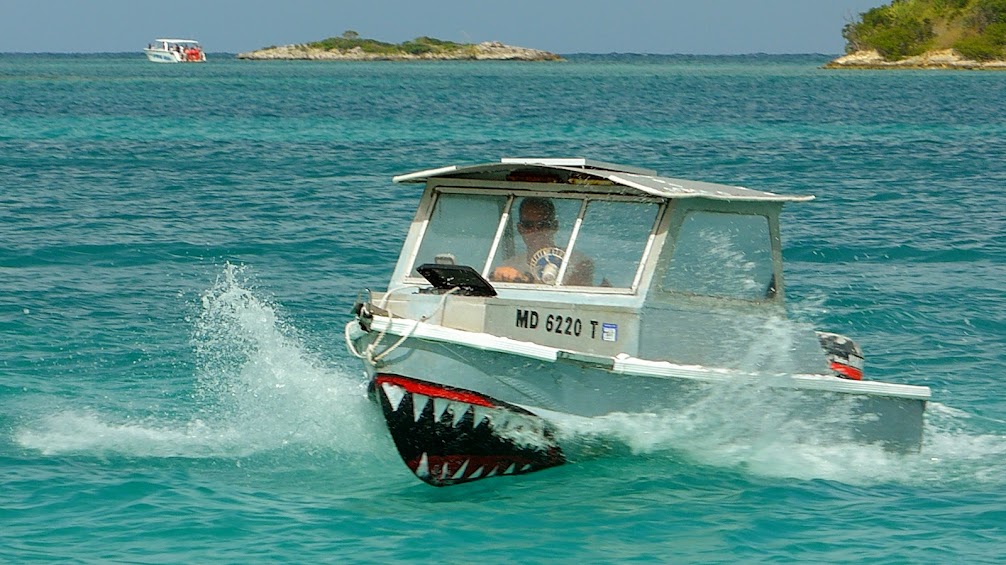 Here’s a short video, capturing the Aluminum Princess in action, and the big grin on Scott’s face:

We’re conflicted about to what to call her now, as those teeth aren’t very “princess-like.” She is often referred to as Sharky, and our friend Rob named her Bruce, after the shark in the movie, Finding Nemo.

Whatever the name, Sea Life now gets even more attention as we travel (I’m not sure if that’s a good or bad thing). When people in dinghys and on boats slow to point, and snap photos as they pass by, Scott will exclaim, “Why does everyone stare at my boat?!?” “I can’t imagine,” I reply, “Maybe because we have the only boat in the anchorage without a sail, that has long poles coming out from either side…and an aluminum pilothouse boat up on the flybridge…with shark teeth clearly visible on it!”

I think Scott secretly loves the attention, and is proud of his “Princess,” who now has a face only a father could love. 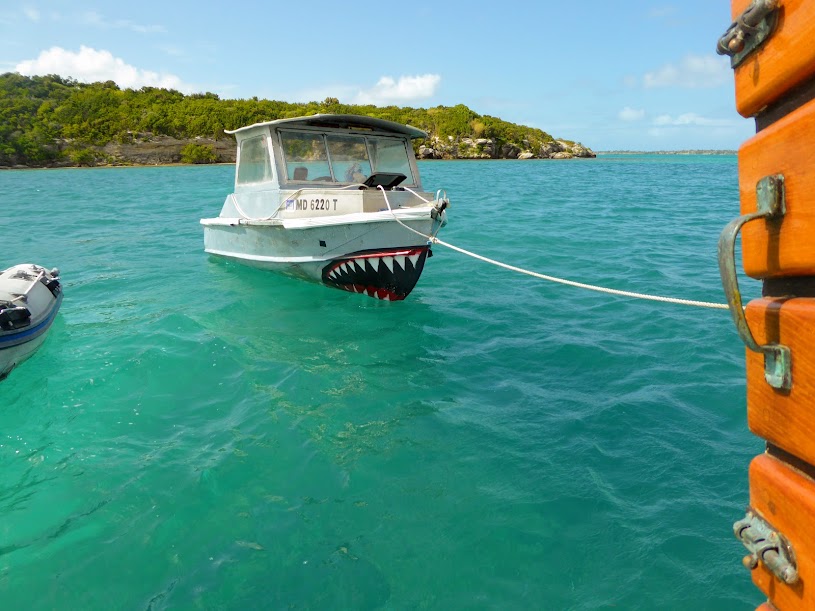