Spending hurricane season in Grenada meant we would be on the island for its carnival celebration. We’d experienced several carnival parades and such during our time in the Western Caribbean, and were excited to be in Grenada for theirs. Being so close to Trinidad, and in the Eastern Caribbean in general, we looked forward to a much bigger event.

Several weeks before carnival began, there was an announcement on the morning net, about a “pre-carnival” event. “Shademan”, one of the local taxi/event drivers (they all go by crazy nicknames), was taking a bus up to watch the local steel pan orchestra practice, and also to see costumes for the various parades being made. We were excited at the idea, and quickly replied to reserve our spot on the bus.

After the usual cramming in like cattle (more on this later), we made the short ride (thankfully) in Shademan’s bus, and arrived at a community center with a large, open concrete area in front of it. Spilling out from under a tarp were pans of all sizes. 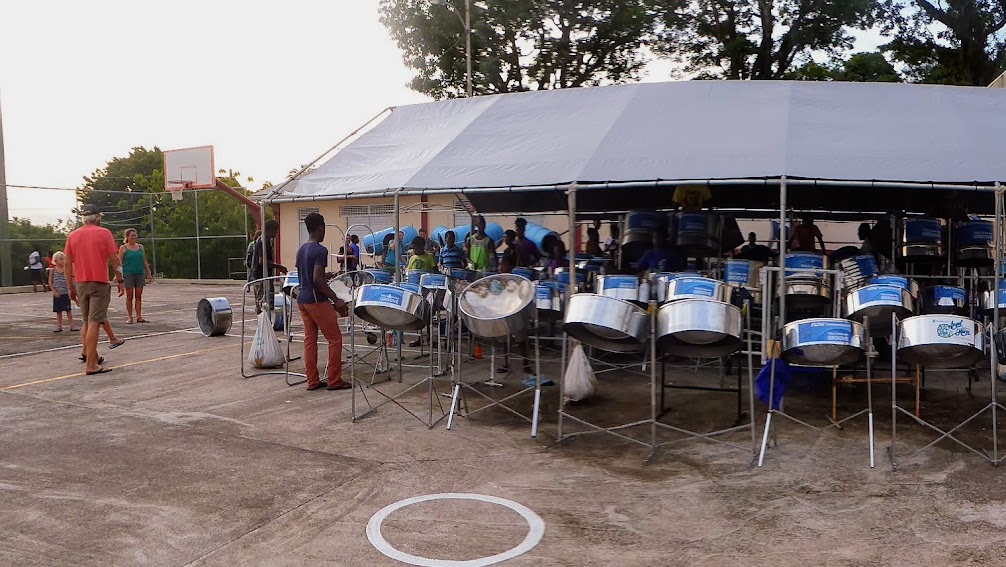 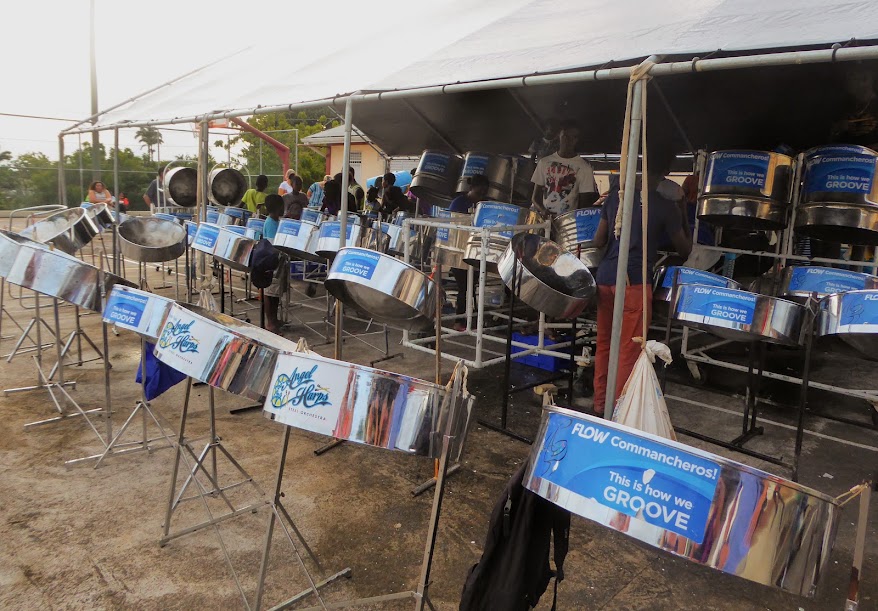 I’m used to seeing one or two pans played at a waterfront bar, but never this many in one place, and never of so many different sizes. 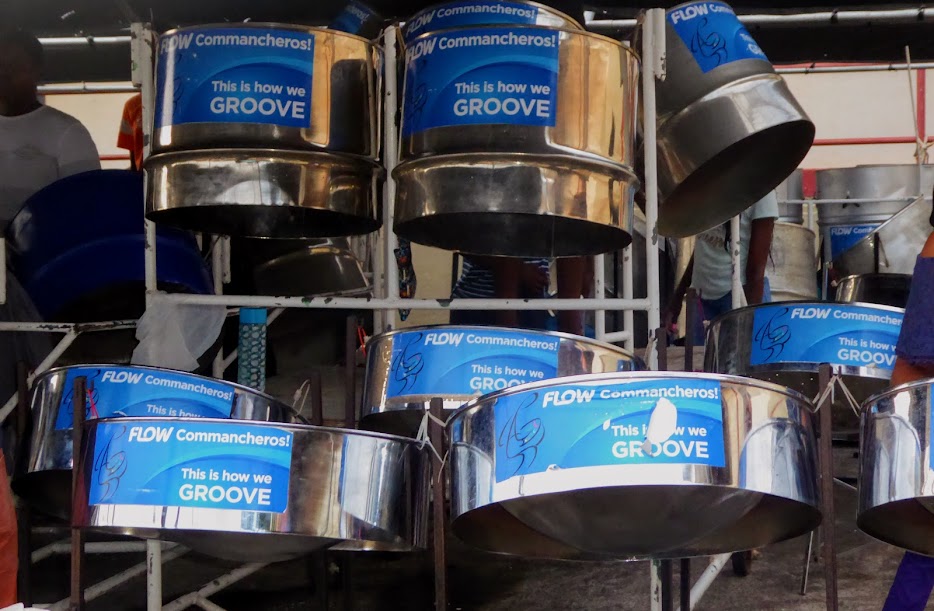 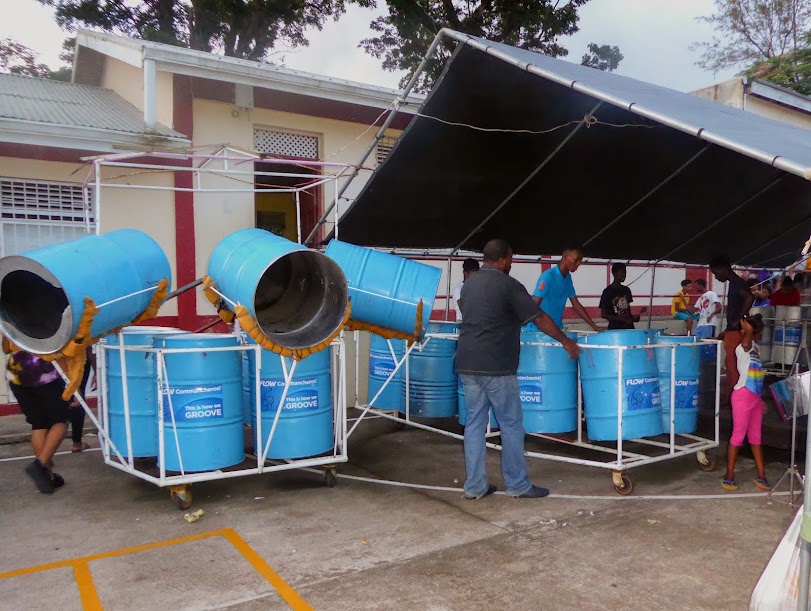 We watched several sections practice, made up of children of all ages. 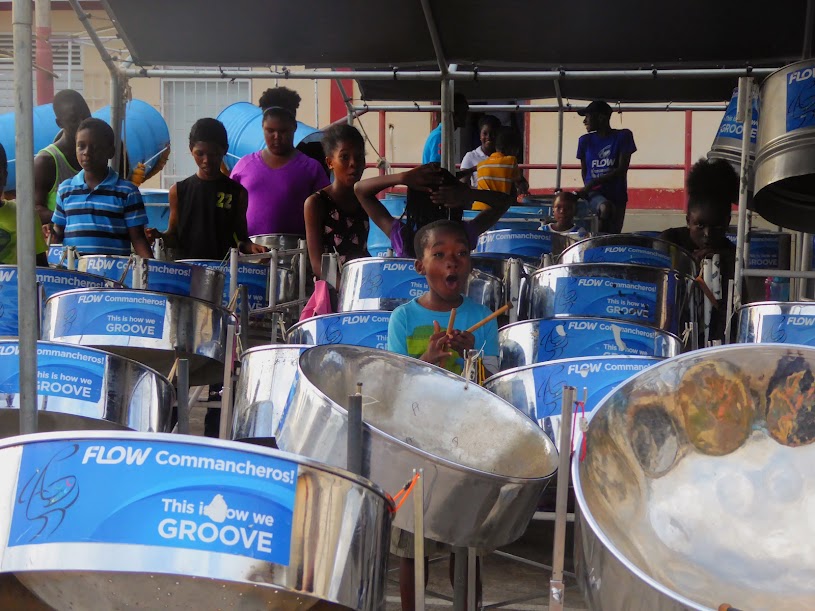 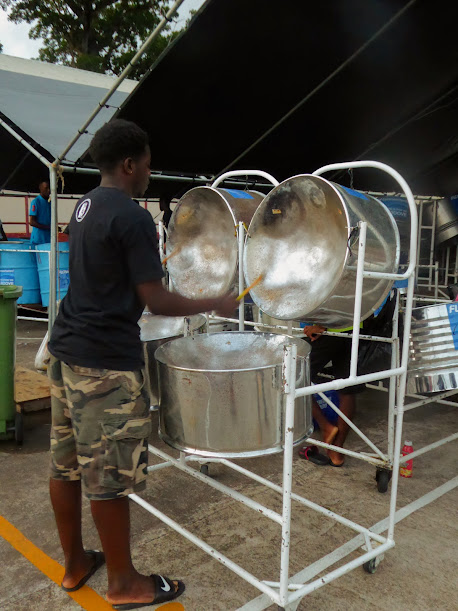 Over time, more players arrived, and by dusk the orchestra was practicing with a complete group. 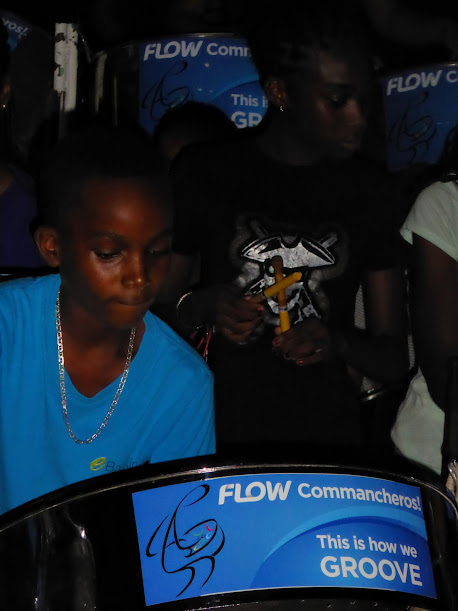 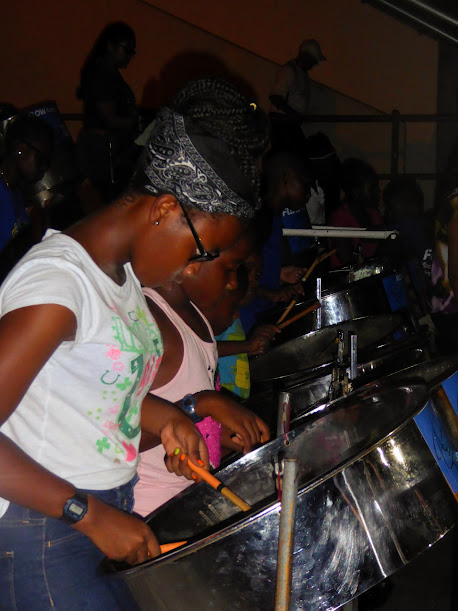 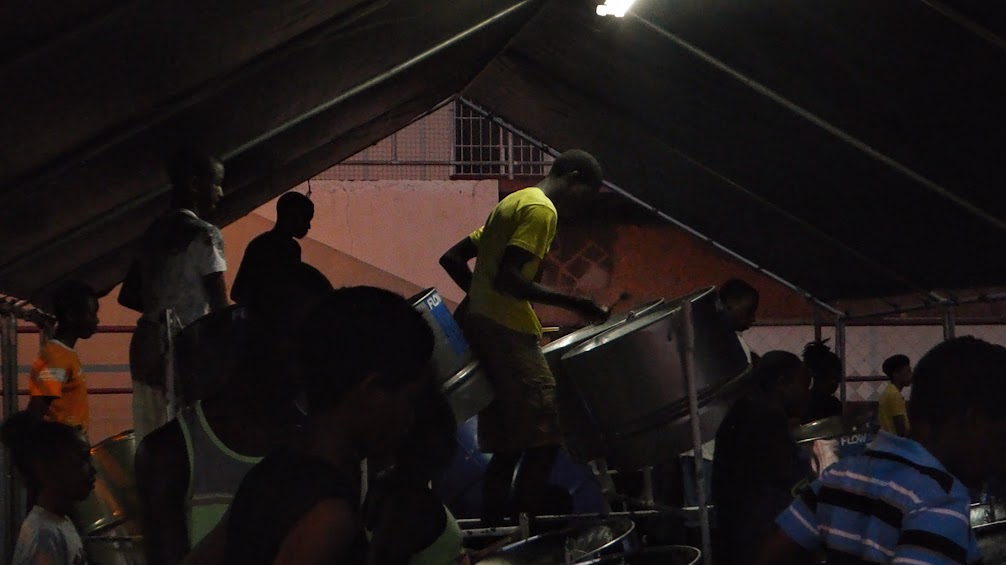 When they took a break, the band’s director came over to welcome us, and took time to tell us about the orchestra, the pans and how they’re made. 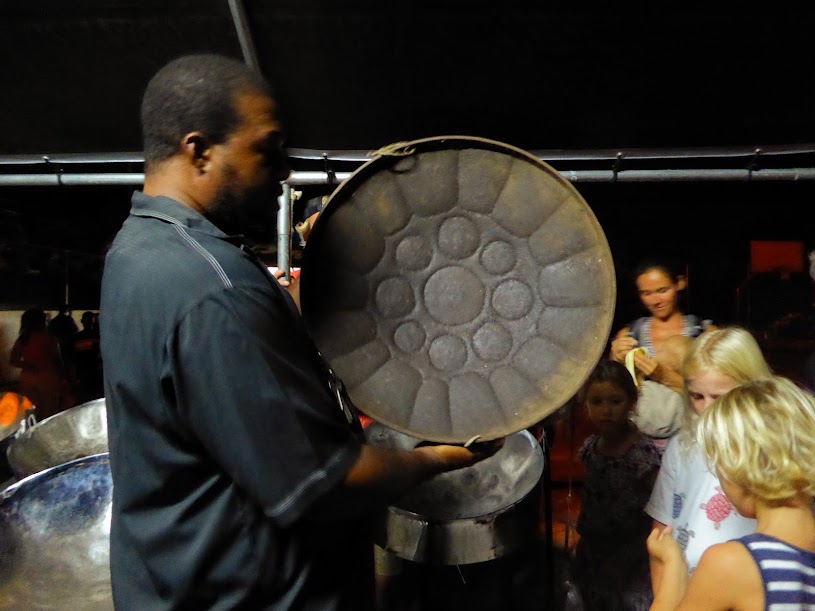 Pans are built using sheet metal. Historically, they have been built from used oil barrels, but currently many instrument makers do not rely on used steel containers, and instead have the bodies manufactured according to their preferences and specifications.

The metal is first stretched into a bowl shape, known as “sinking,” which is usually done with hammers, or the help of air pressure. The note pattern is then marked, and notes of different sizes are shaped and molded into the surface. Each one creates a different note, subtly different from the ones around it, according to their position and size. The note’s size on the pan corresponds to its pitch; the larger the oval, the lower the tone.  Next, the notes are softened and tuned, to get the right notes for each playing area, as well as the desired pitch. 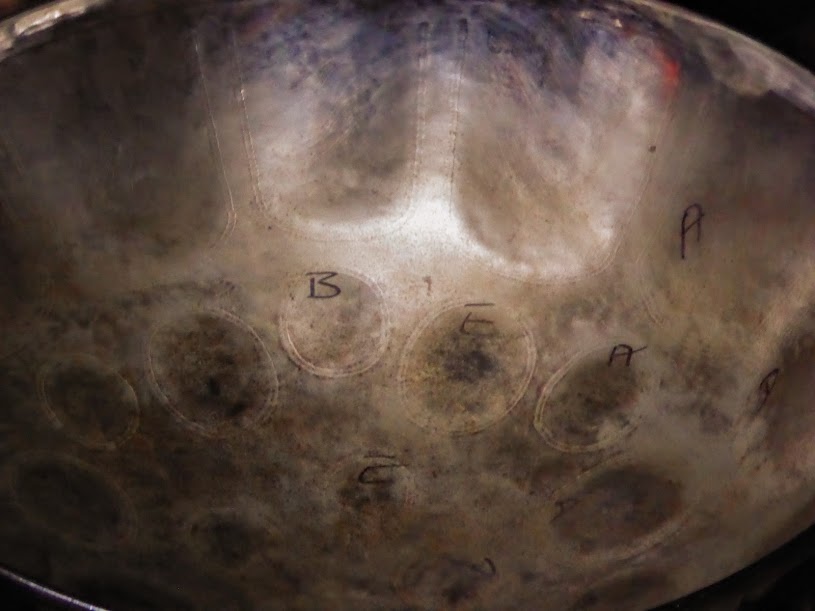 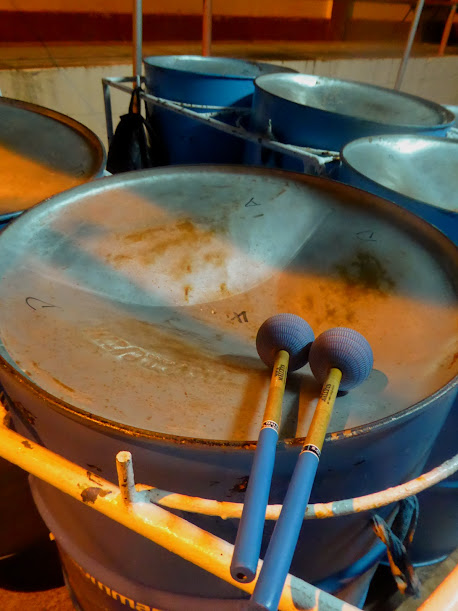 The size of a pan varies from one to another, with the length of the skirt (the cylindrical part of the oil drum) generally corresponding to the high or low range of the drum. A pan may have almost all of the skirt cut off, with many soprano-range notes. 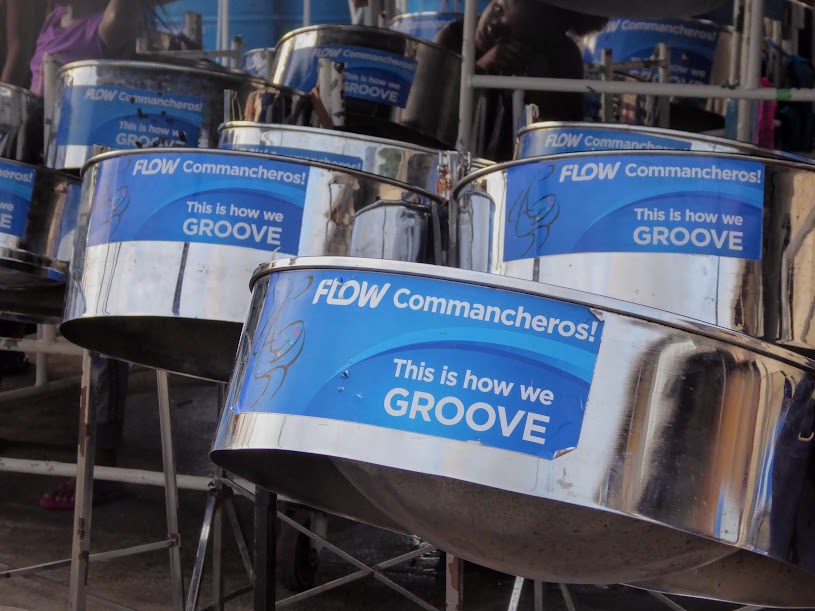 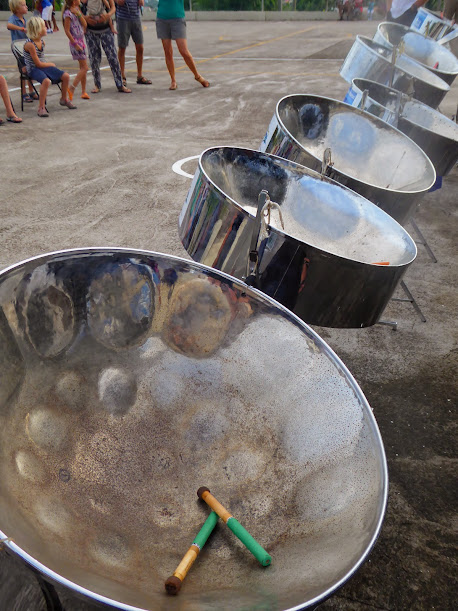 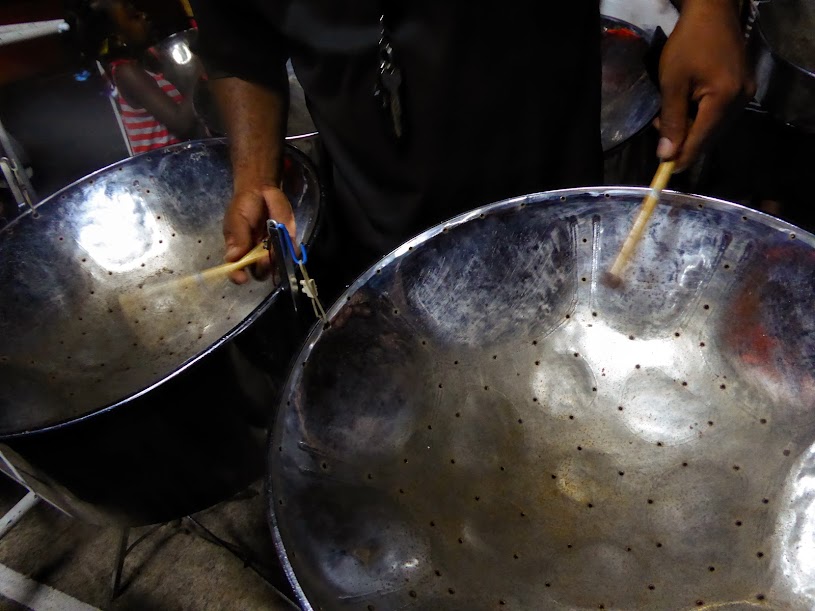 Or, the entire drum may be used, with only a few notes per pan, in which case one person plays a group of pans. 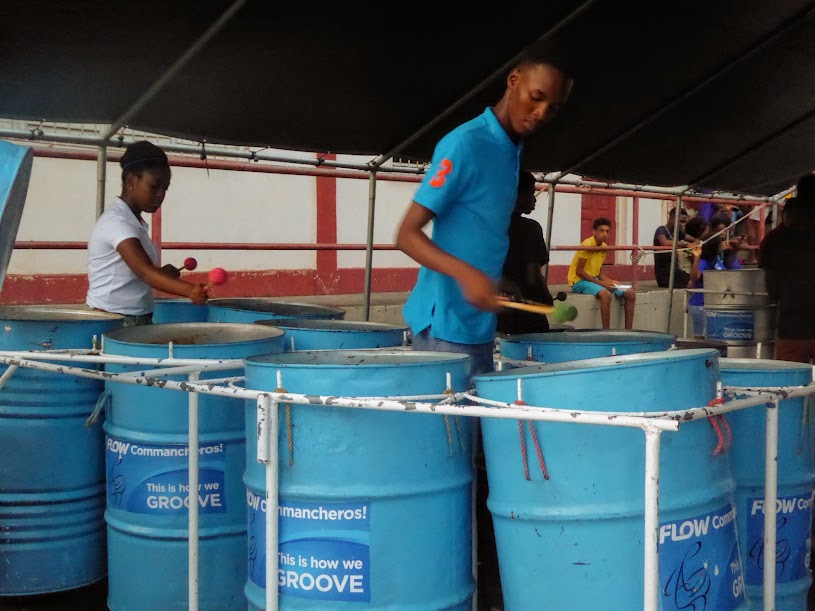 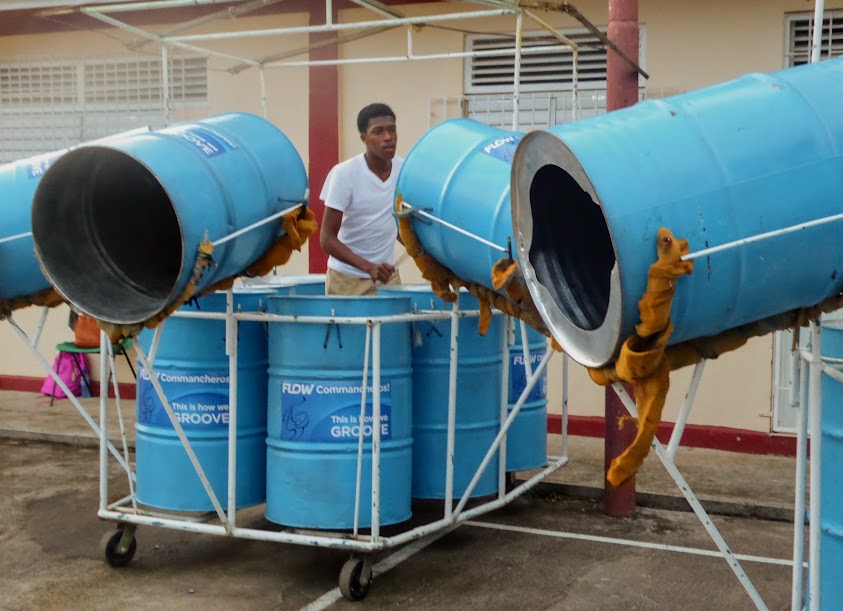 In an orchestra, instruments are grouped together to create sections: horns, woodwinds, strings and percussion. Each section contains instruments that play in various parts of the musical scale, from the very high notes (soprano) to the very low notes (bass). The Steel Drum family of instruments is the same.

I found this great chart, with visuals,  showing types and sizes of pans we saw at the orchestra practice.

We learned that most bands are a real part of the local community. Young children are encouraged to join a band, from as young as five years old. They learn the art of playing the steel pan, but also are educated in community values and social standards.

After our pan lesson, the director led us into a building where costumes were being made for carnival. We expected a much larger room, and couldn’t believe how much production was going on in the small space.

Women were hard at work sewing and gluing, surrounded by piles of fabric, laces, trims and beads. 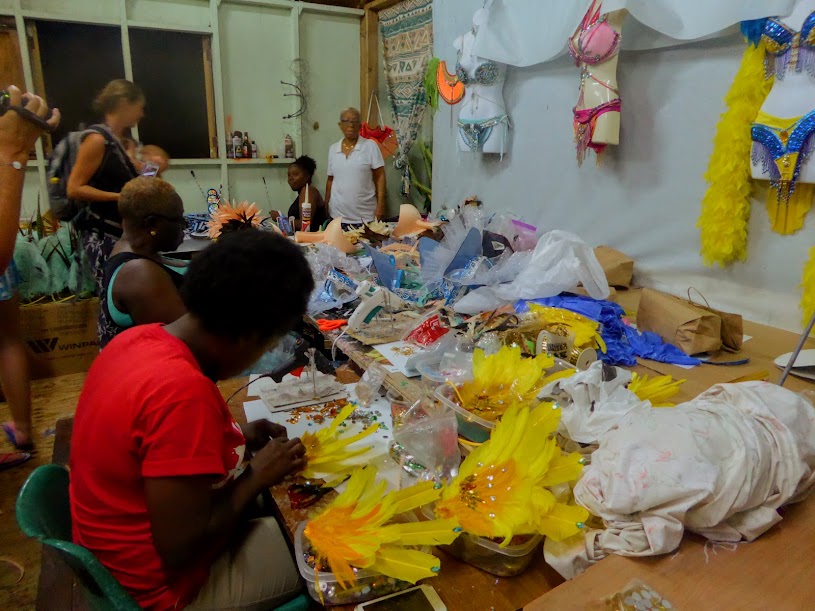 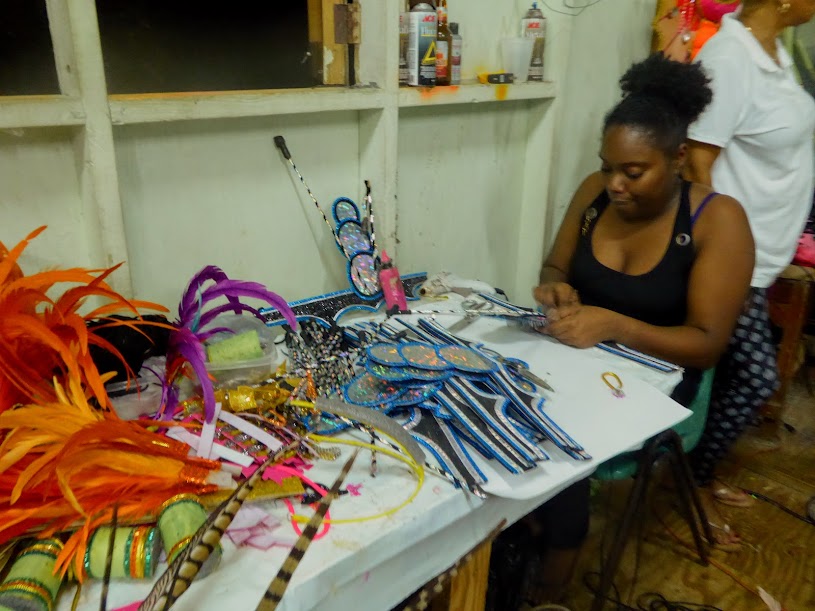 Headbands were piled on tables, headpieces hung from the ceiling, and skimpy outfits lined the walls. 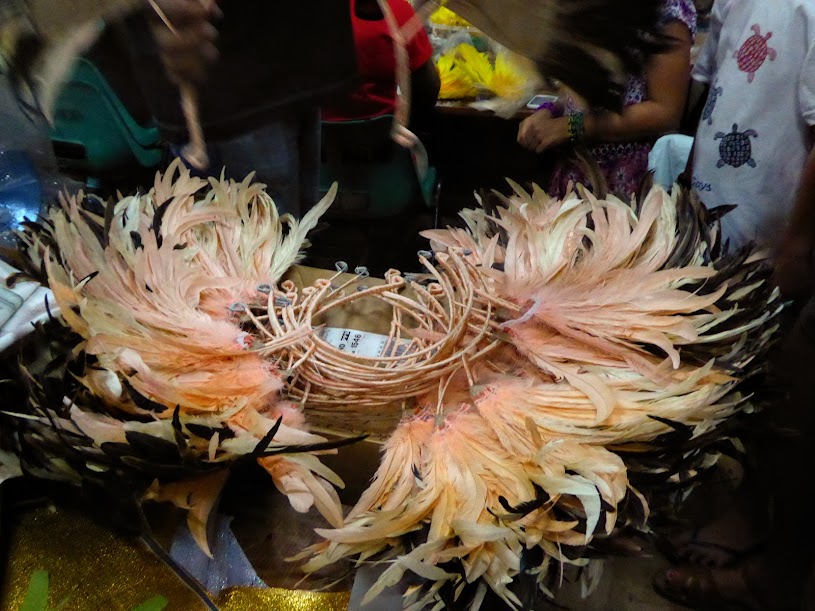 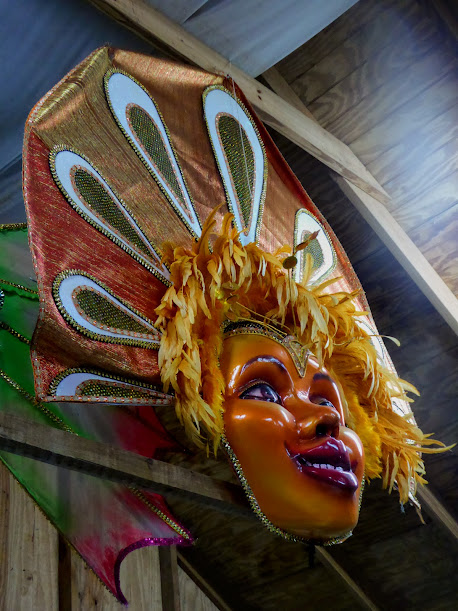 The room was filled with different colors and textures, and screamed..Carnival is coming! 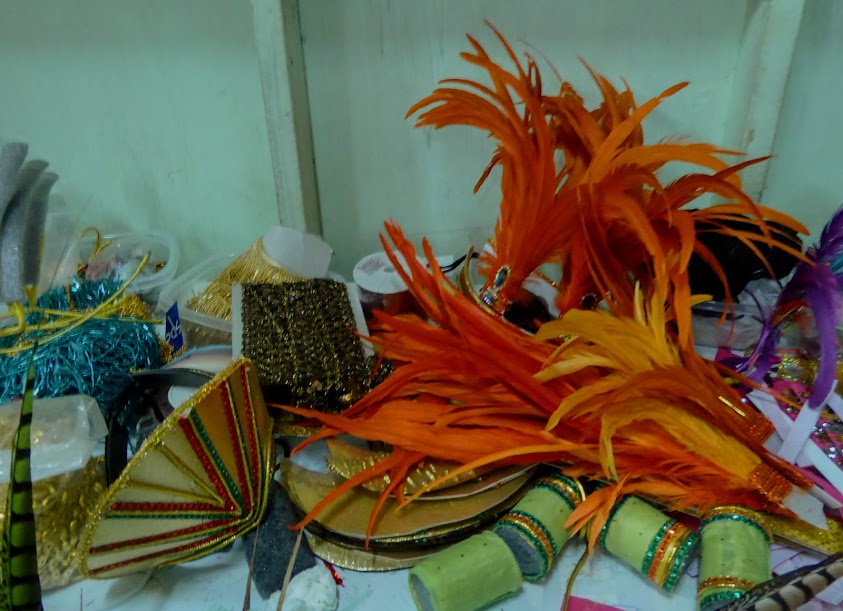 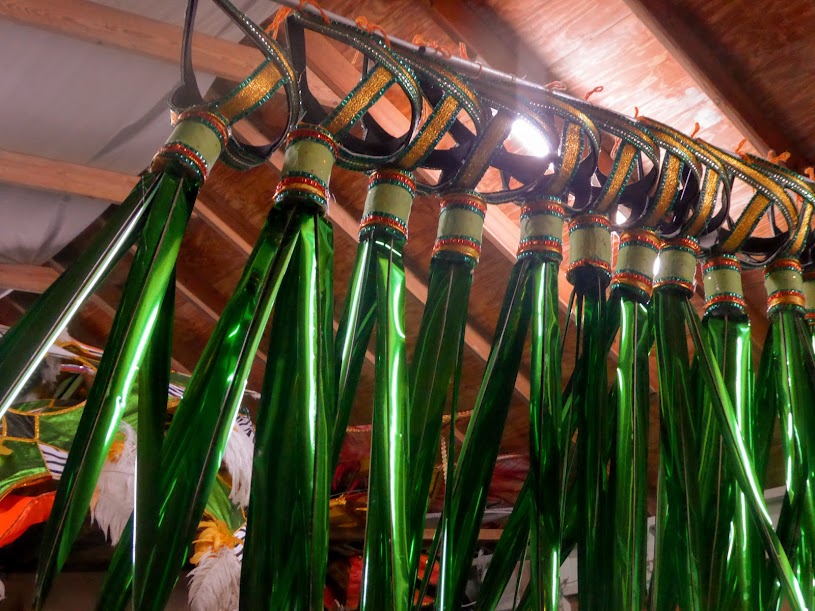 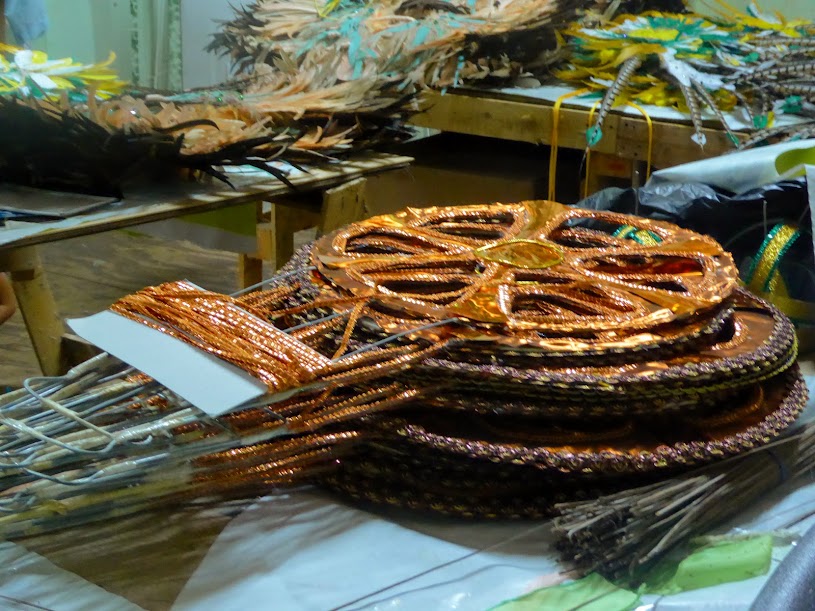 We were then lead into an even smaller, adjacent room, which was crammed full of finished pieces. Amid the room full of feathers and sequins, a man was cutting fabric…for still more costumes. 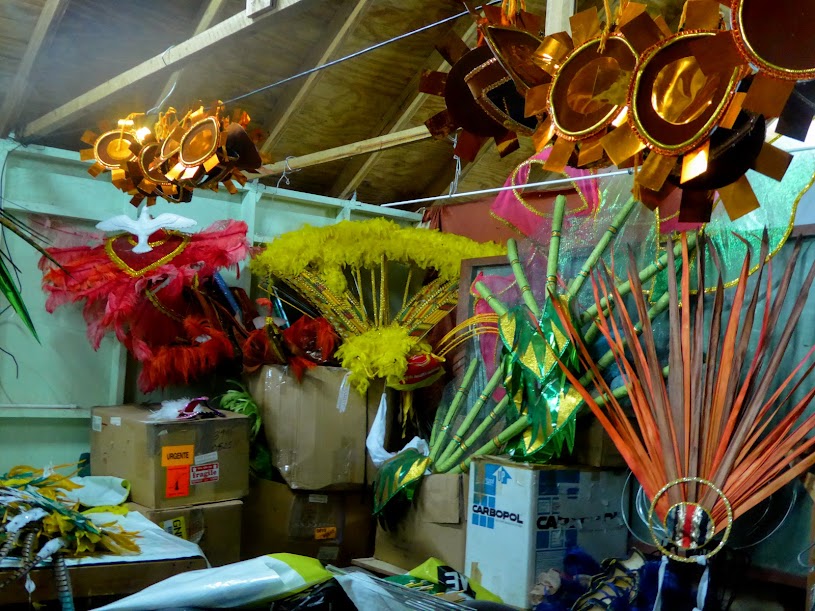 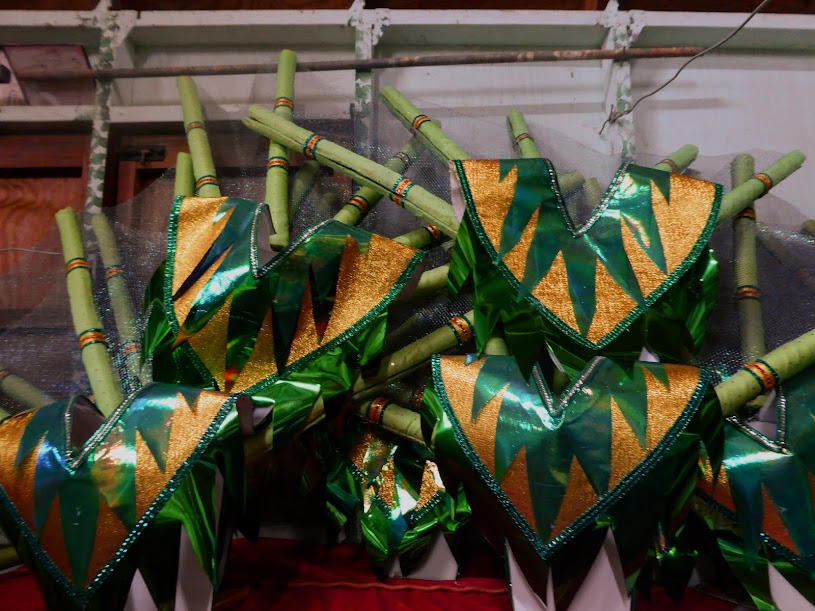 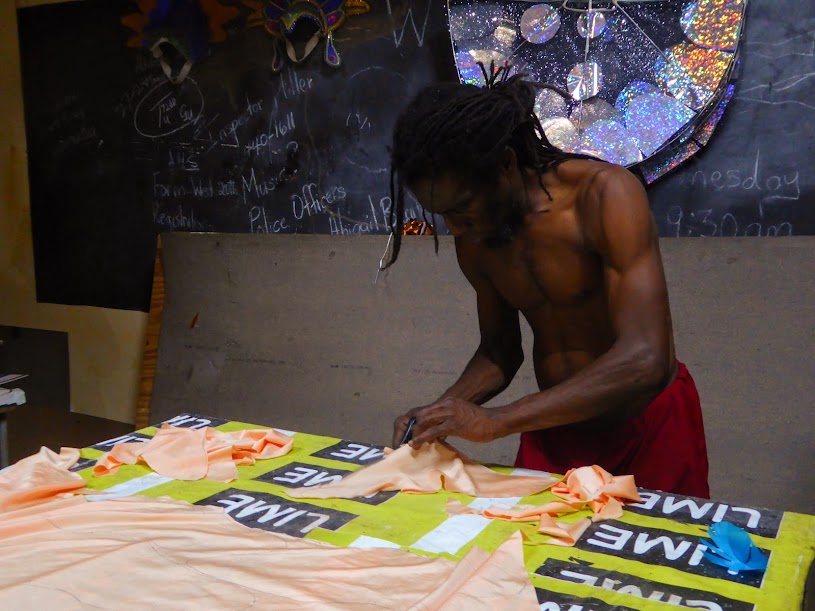 We came back outside to find the air filled with the sound of music and the smell of food. The food tent was up and running, selling barbecue chicken and oil down. The national dish of Grenada, oil down is a one-pot dish found at all island events, and is also made by locals for gatherings of family and friends.

Breadfruit is a staple ingredients in the dish, and vegetables such as carrots, cabbage, are added. Meat and fish, both salted and fresh, and crab are also used. Flour dumplings, lots of fresh coconut milk and turmeric, a key ingredient, round out the dish. Fresh turmeric gives the dish its signature deep gold-yellow hue and adds overall flavor. 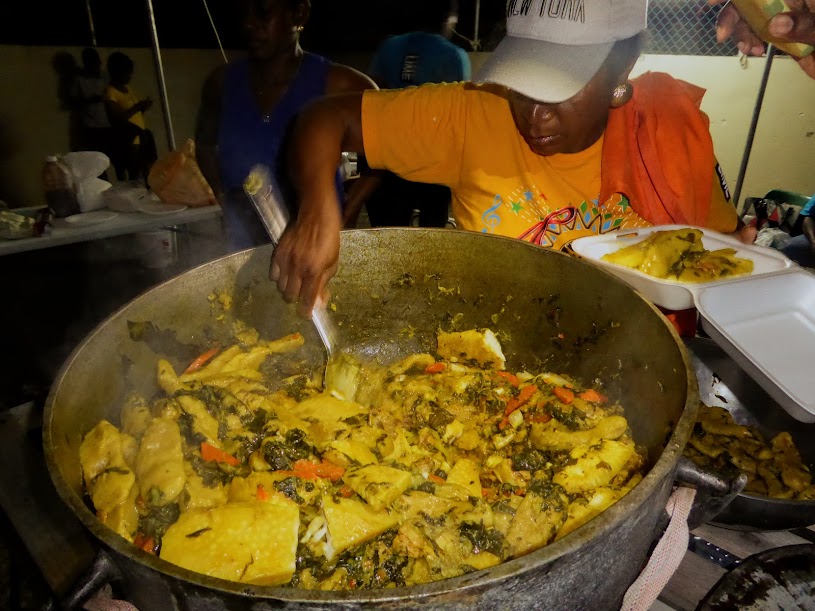 There is no one set recipe for oil down, and each household and parish makes it to suit their taste. The oil down served at the pan practice was some of the best we had while on Greneda…delicious! I found a really interesting article about the history of oil down, where its ingredients came from, and how it’s made. Read it here.

By now, official practice was over, and the orchestra was playing for fun. The thunderous sound of all those pans was amazing. Here’s a video of these talented musicians, one of which having an extra good time:

We stayed and enjoyed the music, and our oil down, until Shademan came around to gather us back to the bus. It had been such an interesting, informative and fun evening! We were glad to have had a behind-the-scenes look at carnival preparations, as well as a delicious dinner, and were now extra excited for the upcoming festivities! Here are more photos of our evening of pan music and costume-making.