From our slip at Club de Pesca, we had a great view of Castillo San Felipe de Barajas. The massive fort dominates an entire section of Cartagena’s skyline, and is the largest, most complex Spanish fort ever built in the New World. These photos  I found online give you an idea of just how mammoth this thing is. 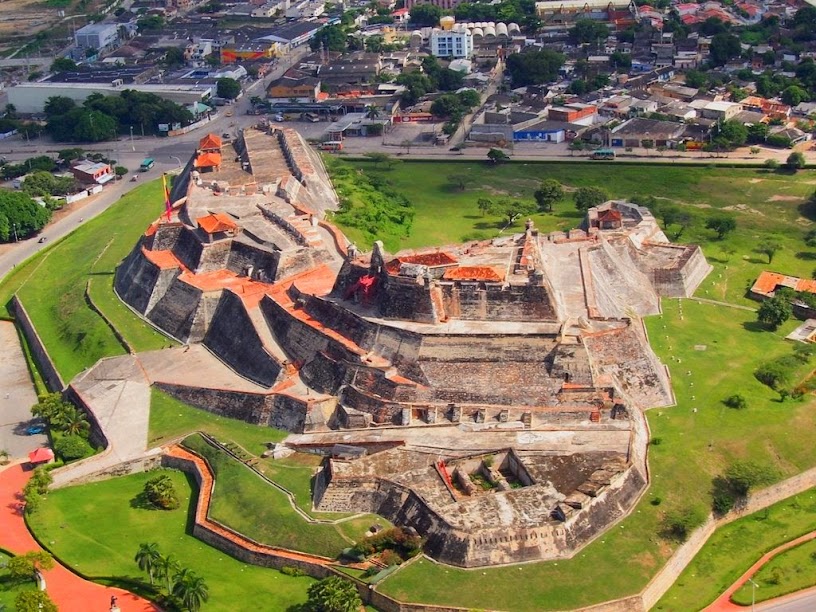 Having never met a fort he didn’t like, Scott obviously wanted to visit. The sheer size intrigued me, so I was game as well, despite Cartagena’s intense midday heat.

It was  just a short taxi ride to the fort, and after purchasing tickets, we made our way up the switch-back ramps that lead to the top.

Once there, we took time to enjoy views of the city below.

We then met our guide, who lead us on a tour, and provided us with many interesting facts about the fort and its history.

The original fort was commissioned in 1630 and was quite small, with eight batteries for artillery and barracks for 24 soldiers. Construction began on top of the 131 foot-high San Lázaro hill, and the fort took its shape over a period of 120 years. The original portion of the work, which included constructing the “old fort,” should have taken five years, but the governor’s unmerciful schedule pushed workers to complete it in just one.

In 1762 an extensive expansion began, which resulted in the entire hill being covered over with the huge fortress (online photo).

Slaves used pickaxes and shovels to first clear the highest point on the hill (pickaxes and shovels..no small feat), and then began building the fort from the top down. Using rectangular blocks gouged from both the coral reefs offshore and from a quarry nearby, the hill was covered with walls and ramps; sentry stations; watchtowers and bell-towers; weapons plazas, ramparts for cannons and artillery.

Structures were also built to maintain 500 troops at any one time, such as a central kitchen, laundry, hospital, foundry and huge cisterns to collect water during the rainy season, in preparation for times of drought.

There are extensive labyrinth-like tunnels that run under the fort, many dug by Welsh miners brought over especially for the task. The main underground tunnel runs along the perimeter of the fort’s complex at sea level. Chambers within it could be exploded, preventing the advance of overhead attackers.

This complex system of tunnels connected strategic points of the fortress, and were used for moving and storing provisions (food, weapons, gunpowder, etc.) as well as re-positioning troops or even evacuation, if ever needed, through a protected exit at the base of the fort.

The tunnels were constructed in such a way that any noise reverberated all the way along them, making it possible to hear the slightest sound of the approaching enemy’s feet, and also making it easy for internal communication among troops. Soldiers used verbal commands, or sent alerts by ringing bells with pre-arranged codes, their sounds echoing through the intersecting tunnels.

There are only a few tunnels open to the public, and I can only imagine the fear in taking a wrong turn (like a rat in a maze). We came upon a group of girls who had gotten turned around, and were a bit panicked. I was glad to have a guide to take us through the dark maze; at times, we used our cell phones for light!

As we entered the tunnels, our guide pointed out exposed sections of the coral and brick construction.

The strategic placement of the San Felipe was key in its defense. Located at the base of the fort was a “hospital” for lepers (where treatment consisted solely of prayer), which was avoided by all who feared the dreaded flesh-eating disease, believed to be caused by demons. The area surrounding the castle on three sides was a mixture of lowlands and hills, frequently flooded by seasonal heavy rains.

An elevated roadway connected these inhospitable surroundings to the fort. It served as a route for supplies, but was useless to attackers, as the road was well protected by the fort’s cannons.

Swamps lay on either side of the road, thick with swarms of mosquitoes carrying malaria and yellow fever that had been introduced to the New World by the African slaves, further hindering enemy troops; an army weakened by disease, exhaustion and thirst was an easy foe for the Spanish to overpower.

The fort itself was actually seven defensive structures, with overlapping fields of fire. Should an attacker actually breach one of the outer parameters, they’d find themselves confronted with a hail of gunfire coming from two or more of the remaining six fortifications. It was a death trap waiting to trap any enemy fool enough to accept the challenge.

Cannons fired through the upper openings, while men with rifles laid down to fire through the holes below.

The small slits at the other end allowed enough room for rifles to fire out, but prevented enemy fire from coming back through.

The entire massive fortress stands as a testament to Spanish tenacity and genius. It was truly impregnable, and was never taken, despite numerous attempts to storm it.

The geometry of San Felipe was years in advance of that practiced in Europe; a full half-century would elapse before fortifications on the continent would rival this enormous fort in Cartagena. Along with the old City of Cartagena, the fort was recognized as a UNESCO World Heritage Site in 1984.

When our tour was over, we spent more time admiring the views of Cartagena, from high atop San Felipe. 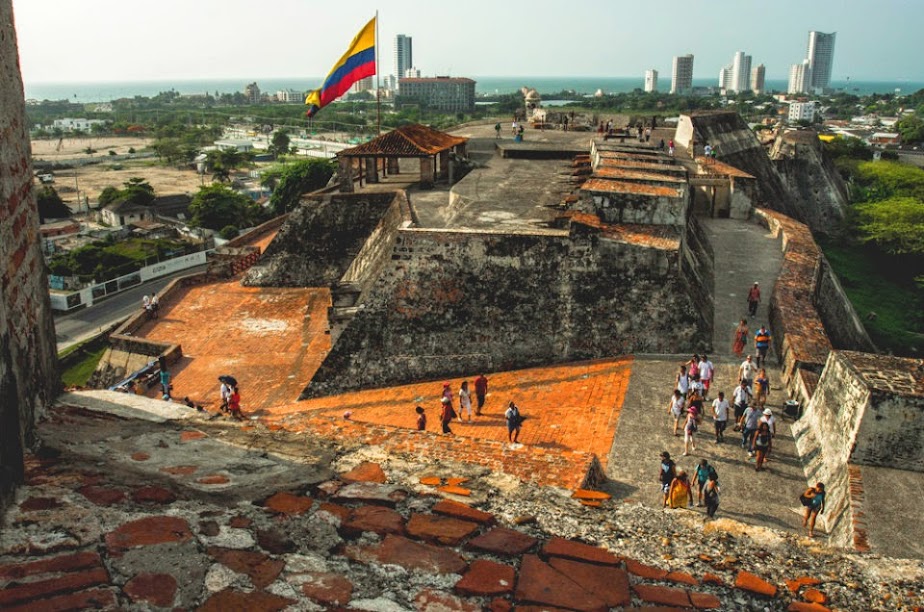 At night, the fort is lit with a warm glow, like a towering beacon on the hill. Here are a few online photos, the second is the view we had from our slip:

I have to say, the imposing and impressive Castillo San Felipe de Barajas was worth the day of sweat.