After our friend Karen headed back home, Scott and I decided to head over to the “big city” of Nargana. On the morning net, we regularly hear cruisers mention stopping at the larger, more populated island for fresh produce, water and other items. At only an hour or so from our anchorage in the Coco Bandero Cays, we thought it was time to check out Nargana for ourselves.

One of several larger and more populated islands in the San Blas archipelago, Nargana is joined to the neighboring island of Corazon de Jesus by a covered, concrete bridge. Here’s an overhead view. 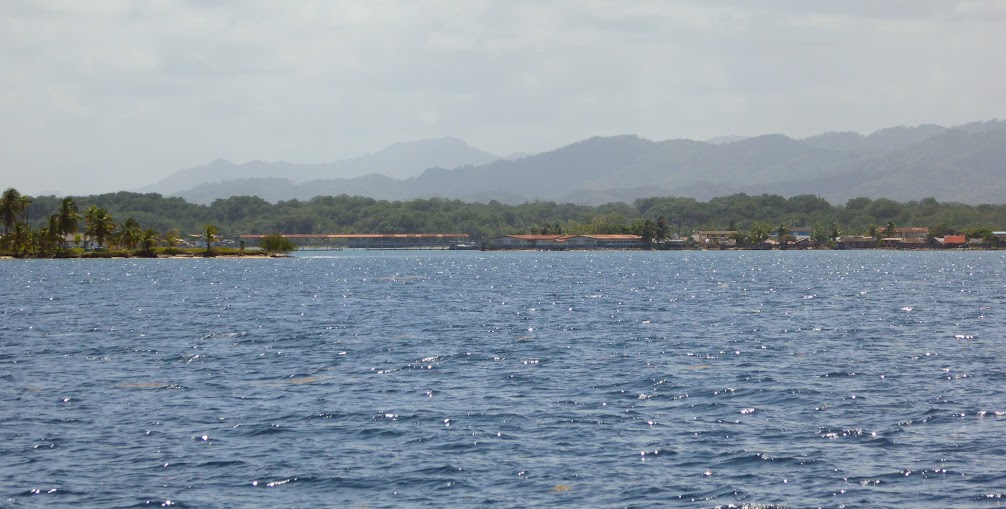 Being a “big city,” we were greeted by a sizable cell phone tower, but unfortunately I still struggled with a decent signal (what are these stupid towers made of??)

Not long after we had anchored, a local man stopped by in his ulu. Frederico lives on the island, and offered his help with anything we may need during our stay. His primary income comes from offering laundry service, but thankfully we have a machine here on board. After chatting with Scott a bit, Frederico told Scott where to land the dinghy when we went in for groceries, and then made his way back to shore.

Never meeting a river he didn’t like to explore, Scott took off the next morning to see what the nearby Rio Diablo river had in store (I stayed behind, to fight with the maddening, in-explainable internet service). He found the usual thick jungle-lined shorelines, but also discovered several graveyards through the trees. 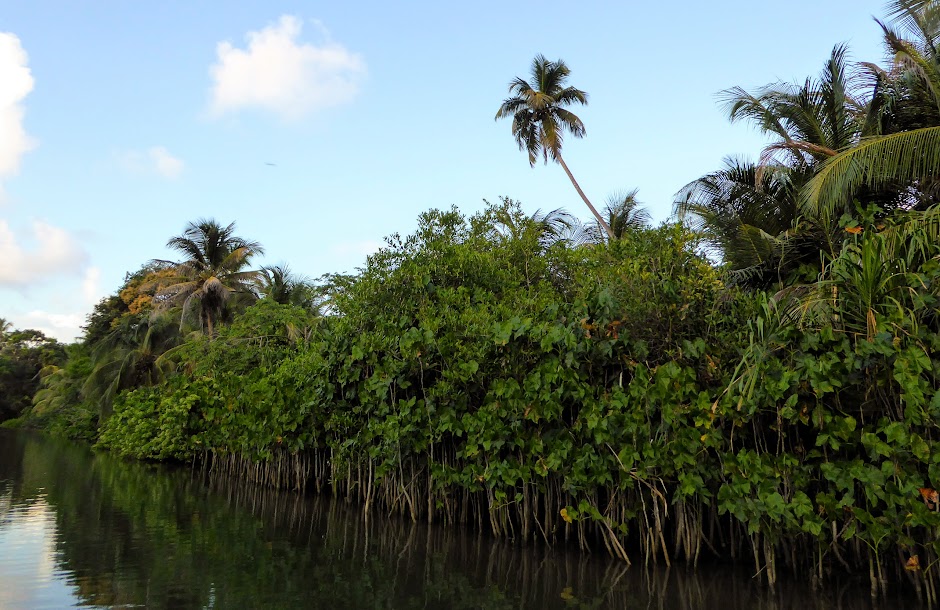 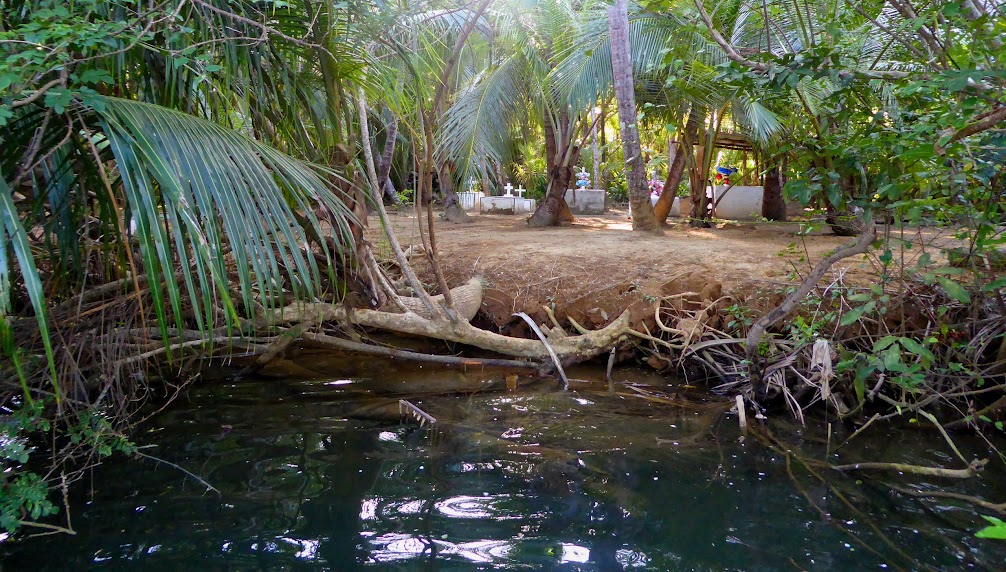 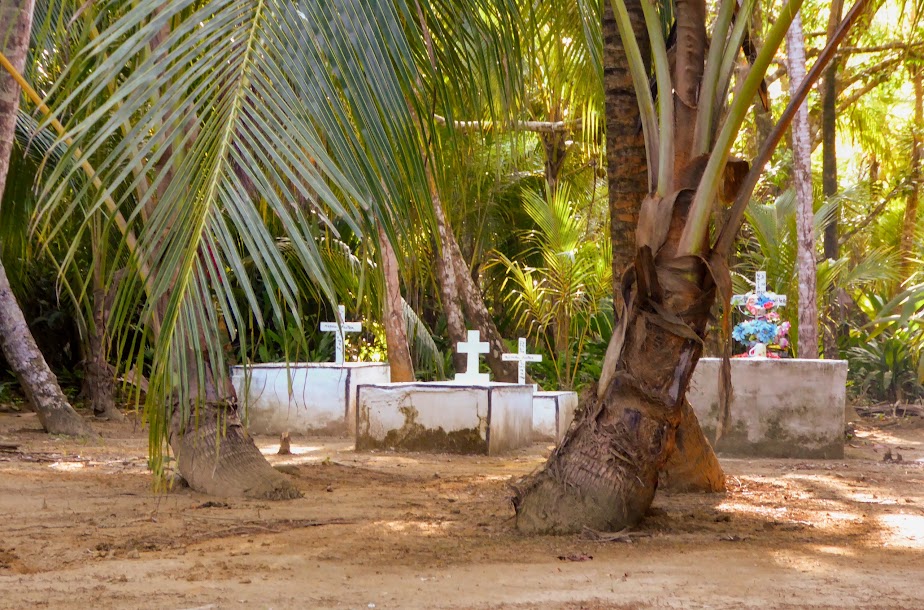 Toward the end of his exploration, the sun came out brightly, casting beautifully clear reflections in the water. 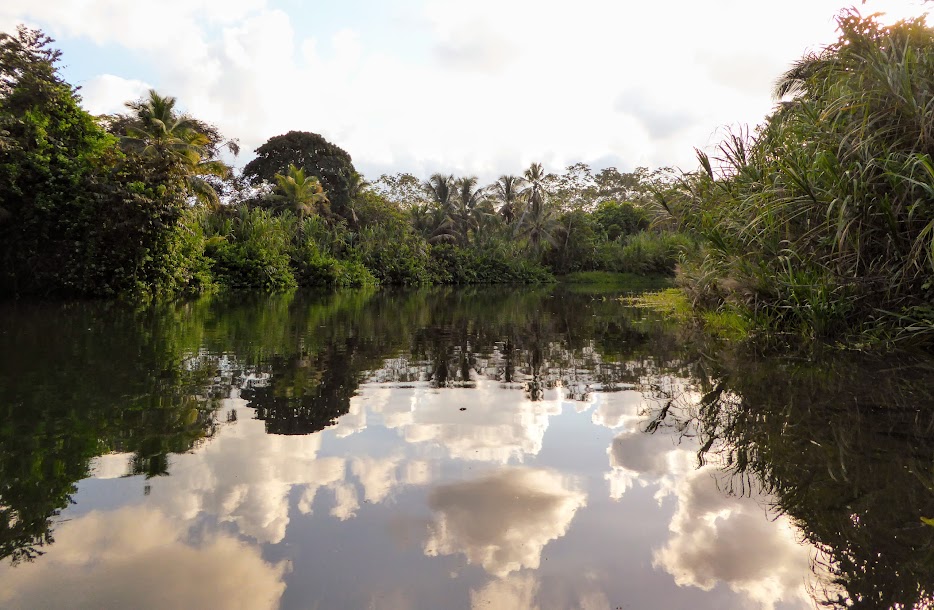 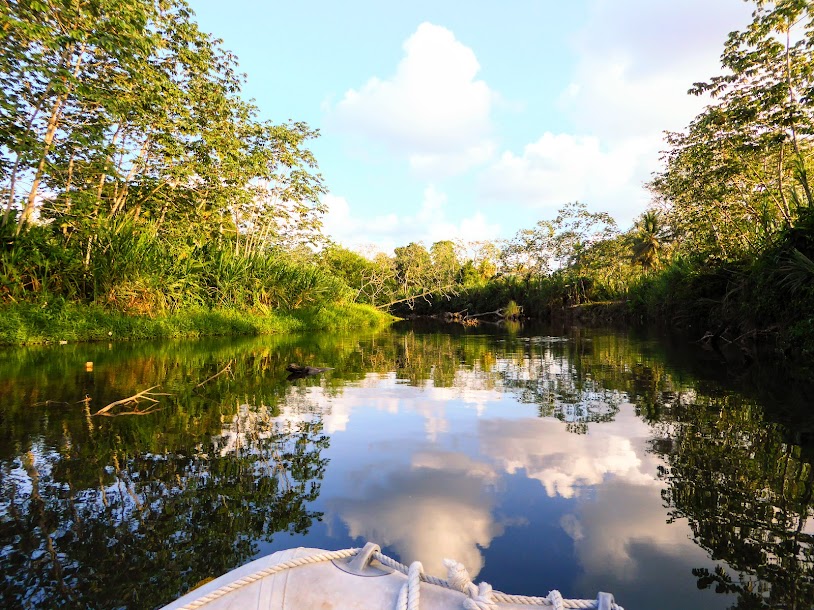 That afternoon, we headed into town in search of fresh produce and bread (Guna bread is made with coconut water, and it’s the best!). As we approached the dock, there was Frederico, waiting for us to land. His house is located on the the outer edge of the island, with a view of the anchorage. He’d seen the dinghy heading into town, and came to offer us a tour. Having no idea where to go in search of produce and bread, we thought, why not, and accepted his offer.

Frederico walked us down one of the island’s main streets, passing a heated volleyball game and many gardens. 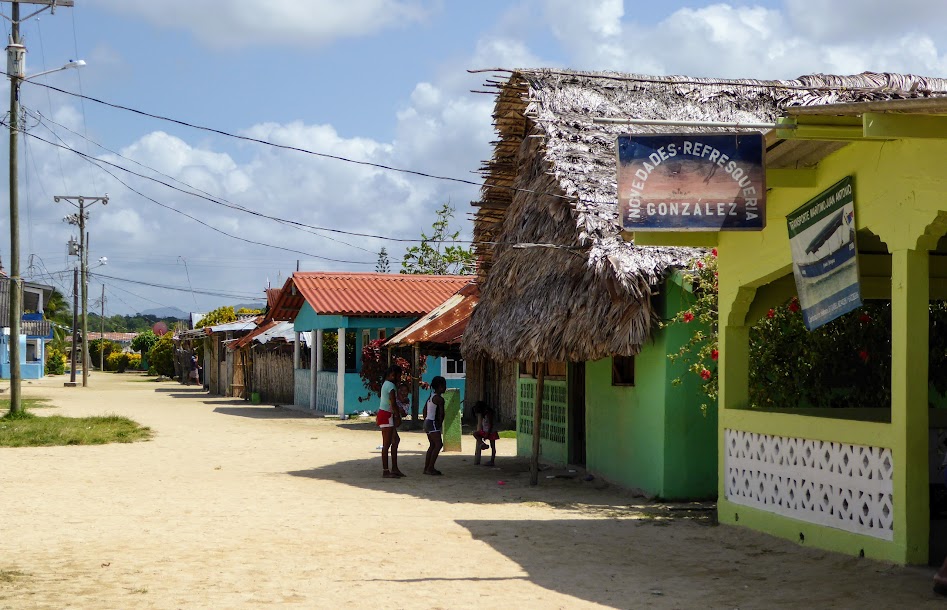 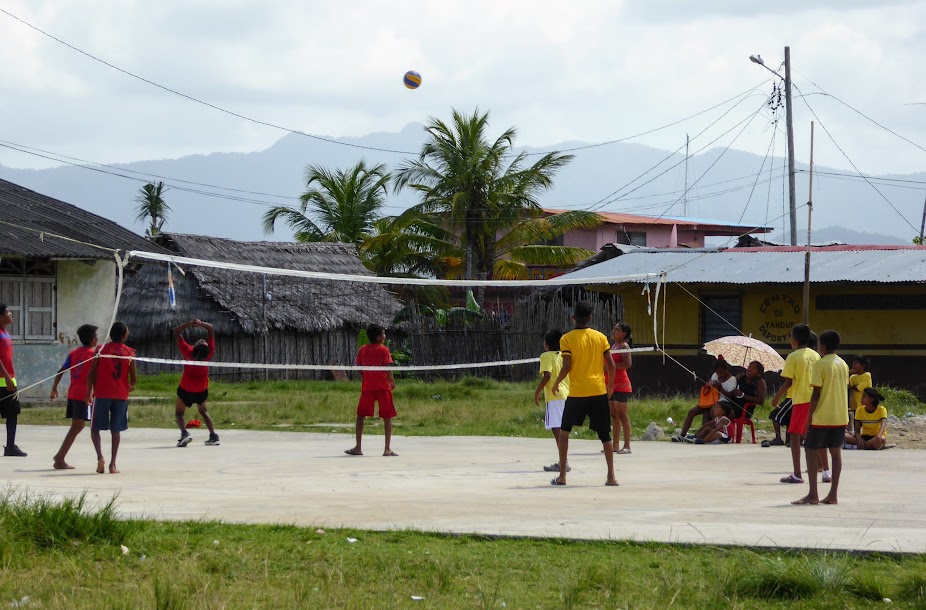 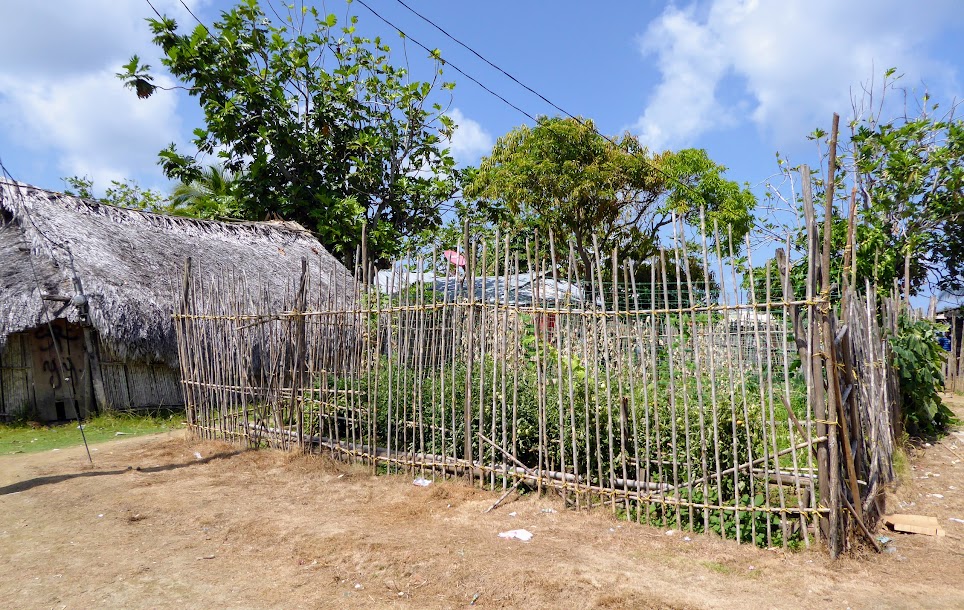 We ended up at the water’s edge, where there were several graves. Frederico explained that the raised burial sites were important people, but we didn’t quite get the who and why. 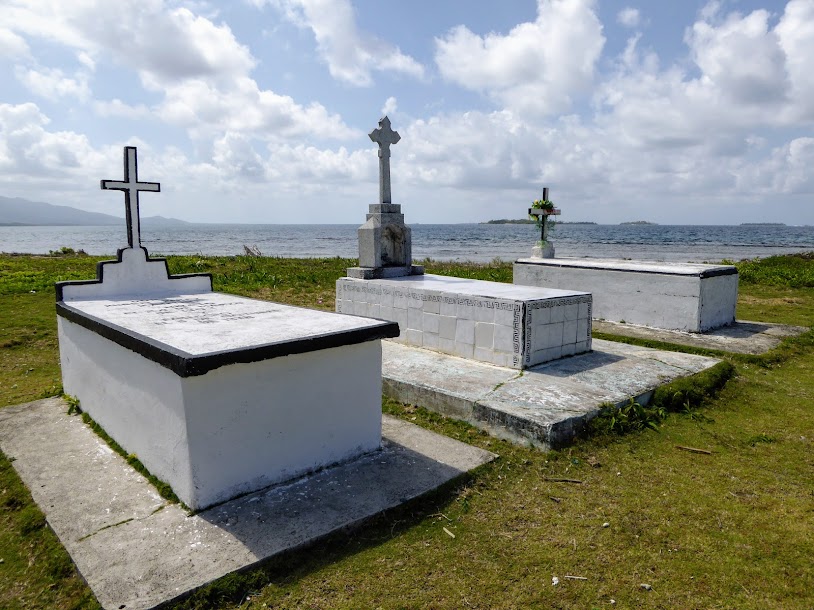 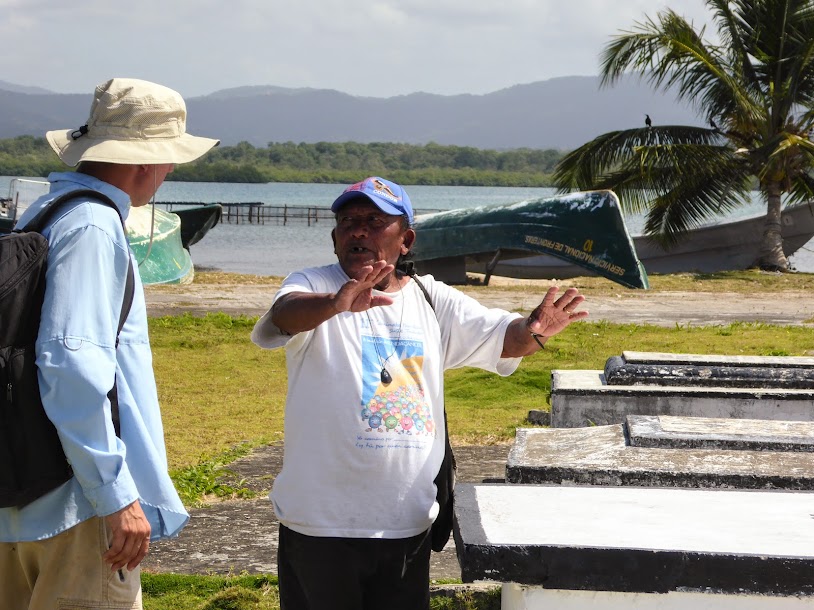 He showed us a beach where many turtles come to nest and hatch each year, and then we made our way back to town, walking an old airstrip that used to service the island. 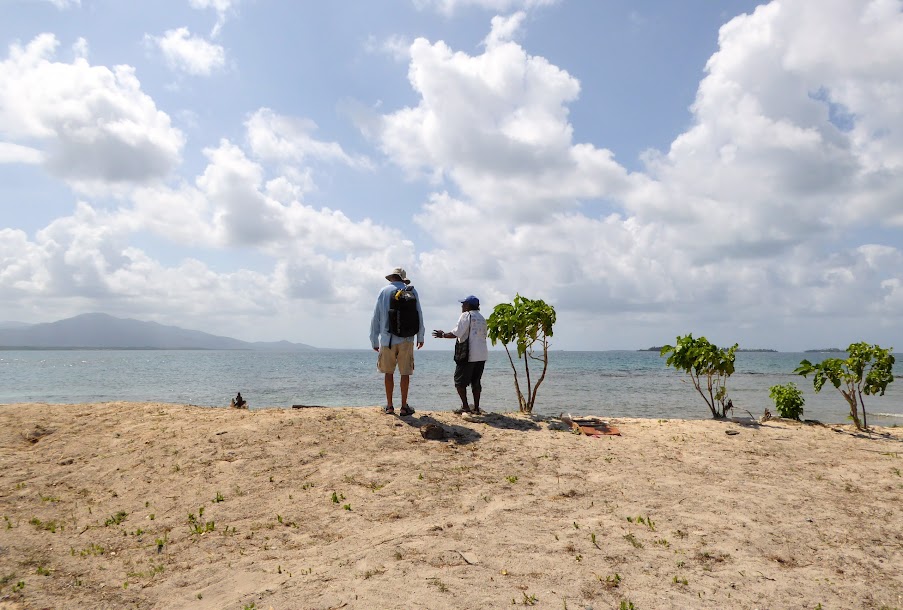 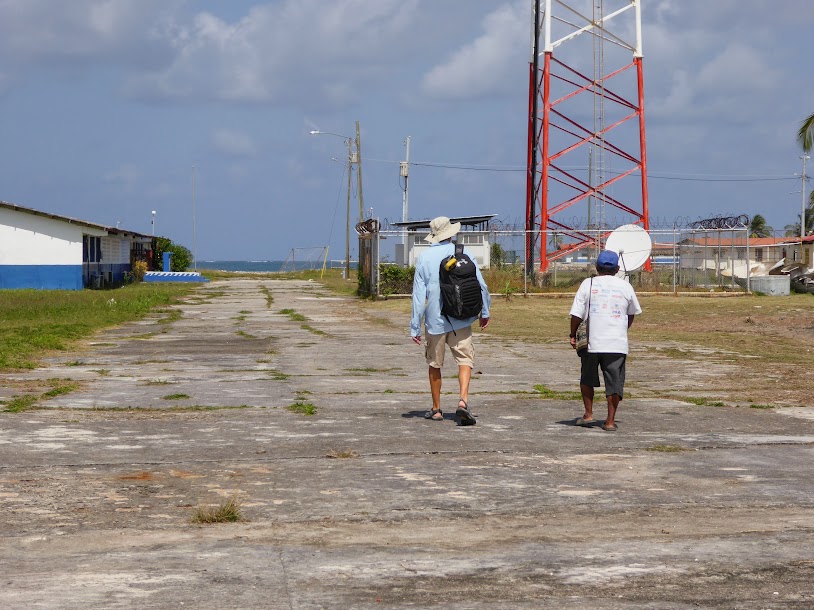 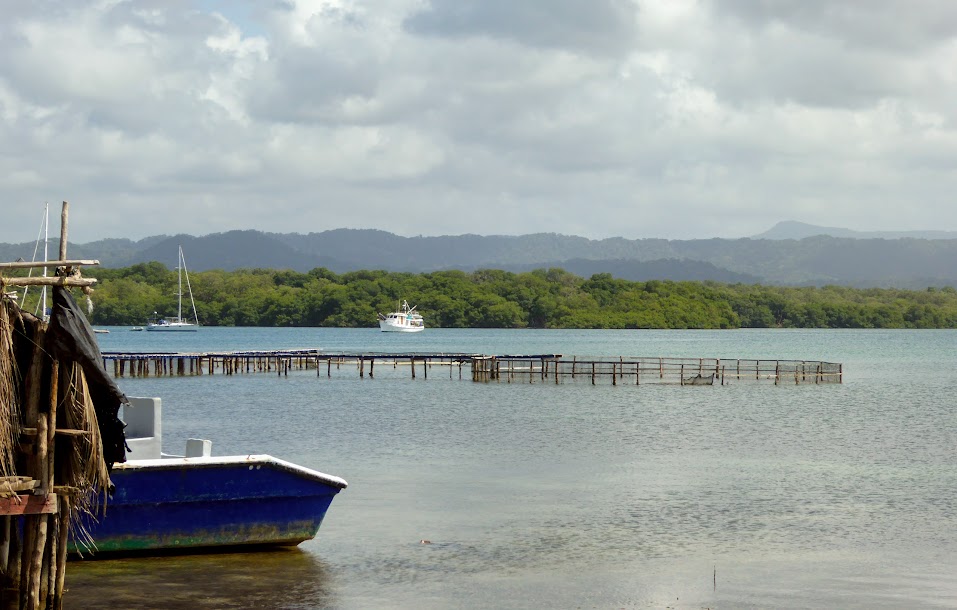 Our quest for bread and produce was lengthy. We’d had no success on Nargana, so it was across the bridge, to try our luck in Corazon de Jesus. 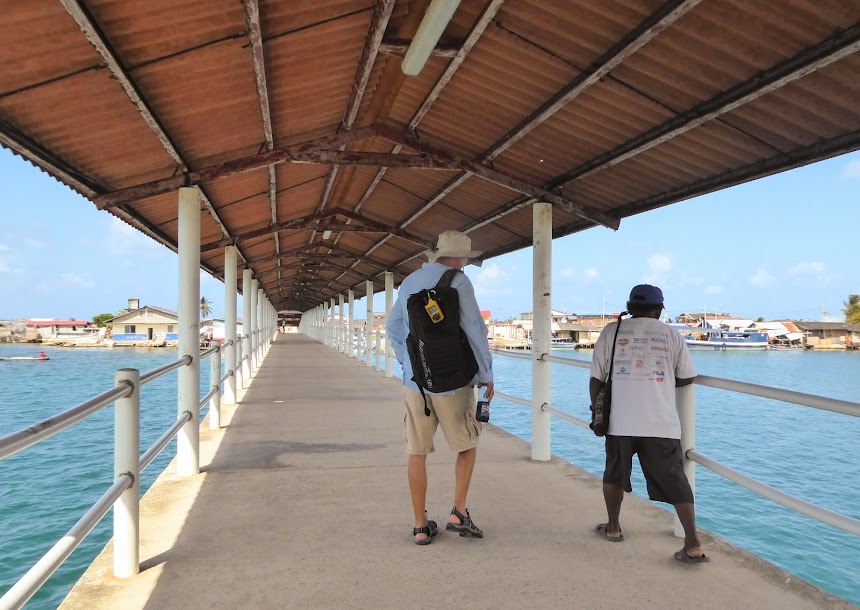 The bread wasn’t too difficult to locate on Corazon de Jesus, although we’d never have found it on our own. Many of the bakeries and tiendas are run out of, or blend right in with homes on the island. 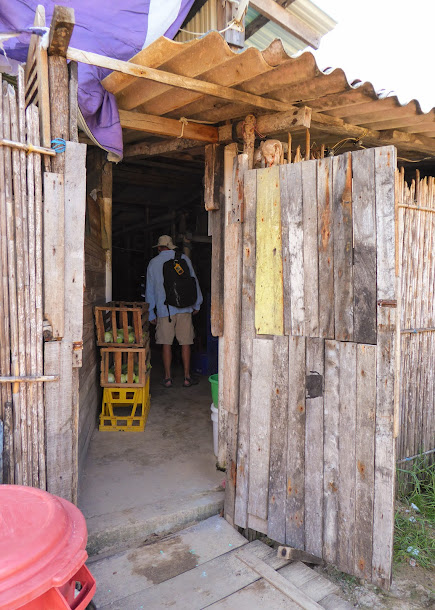 Finding produce was not as easy, or productive. We’d seen several supply boats in town as we came in, but there was nothing to be found but some beat up cabbage, carrots and potatoes. There’s always talk of fresh stuff disappearing the day after it arrives here, and apparently this was true.

After walking both islands in the midday heat, we enjoyed a beer in the shade with Frederico before he walked us back to our dinghy. He raises funds to aide the handicapped people on both islands, and we were happy to donate to his efforts as a thank you for his help in town. I snapped a photo of our friendly guide with Scott, who is a giant in the San Blas; for that matter, in all of Mexico and Latin America. 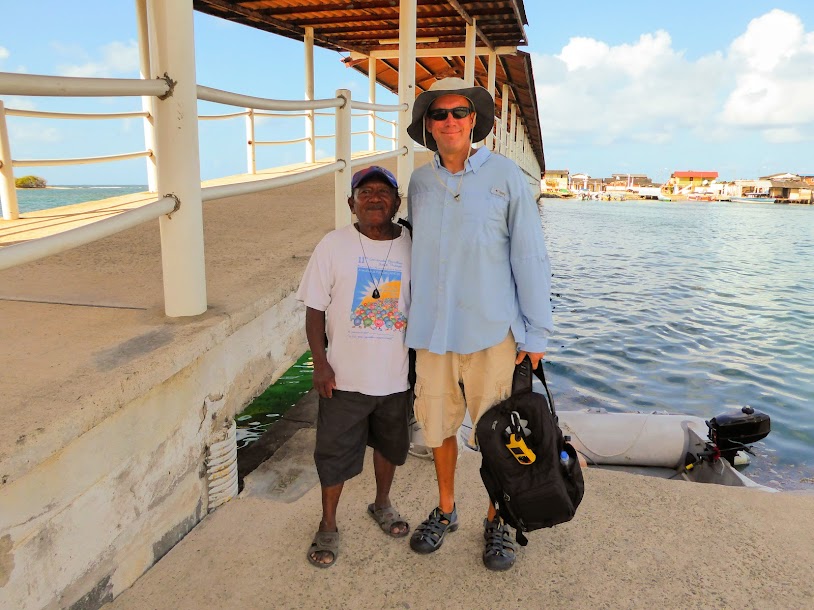 Our last quest was for gasoline, and we’d been told that Paco’s was the only game in town. Frederico hopped into the dingy to help us locate the pier (again, we’d have never found it on our own). It was quite the place, definitely not your usual gas station. While gasoline was siphoning out of a barrel and into our jerry cans, Frederico grabbed a seat. 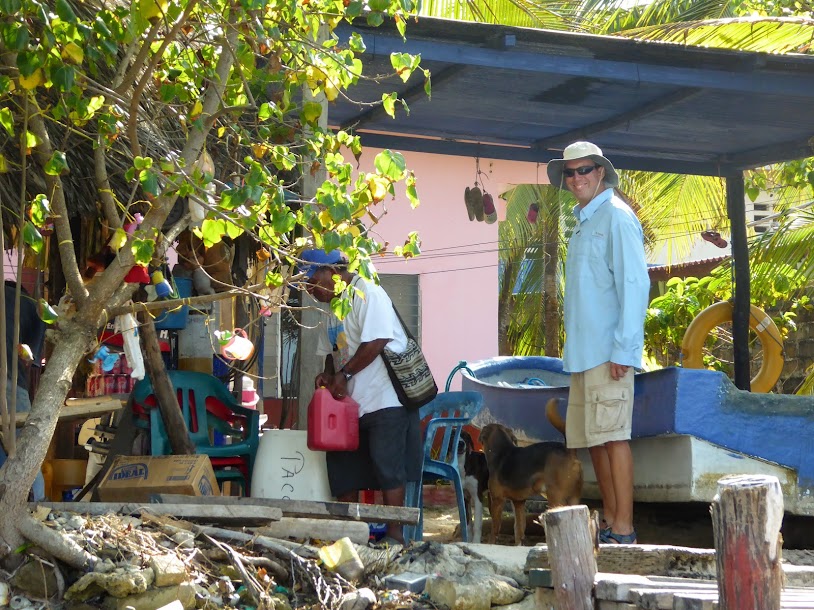 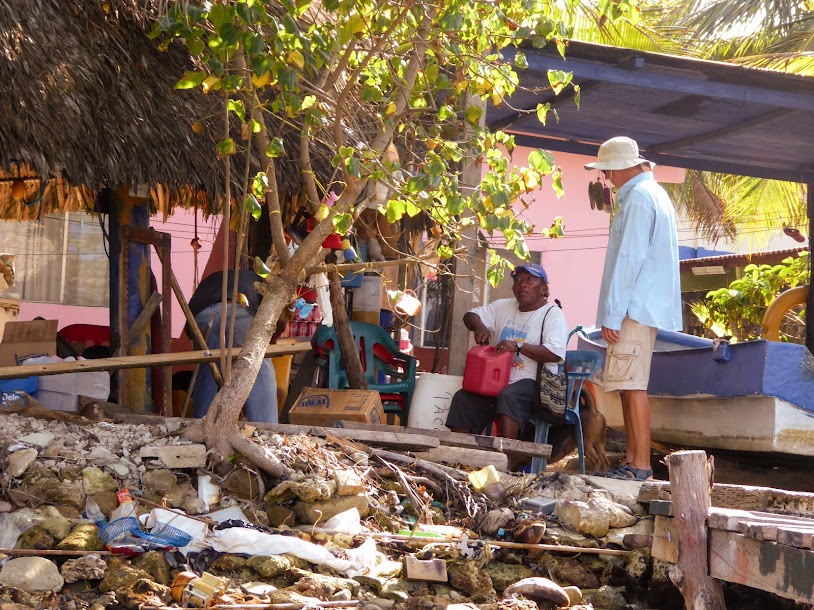 With two out of three things checked off our list, we headed back to Sea Life. Off of our bow was the crowded Nargana shoreline, but behind us were beautiful views of scenic islands in front of the mainland mountains. 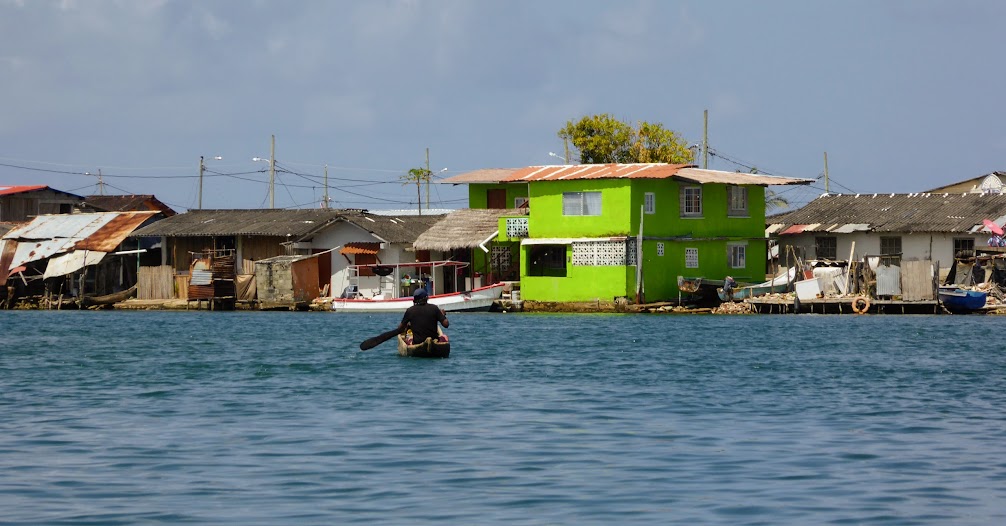 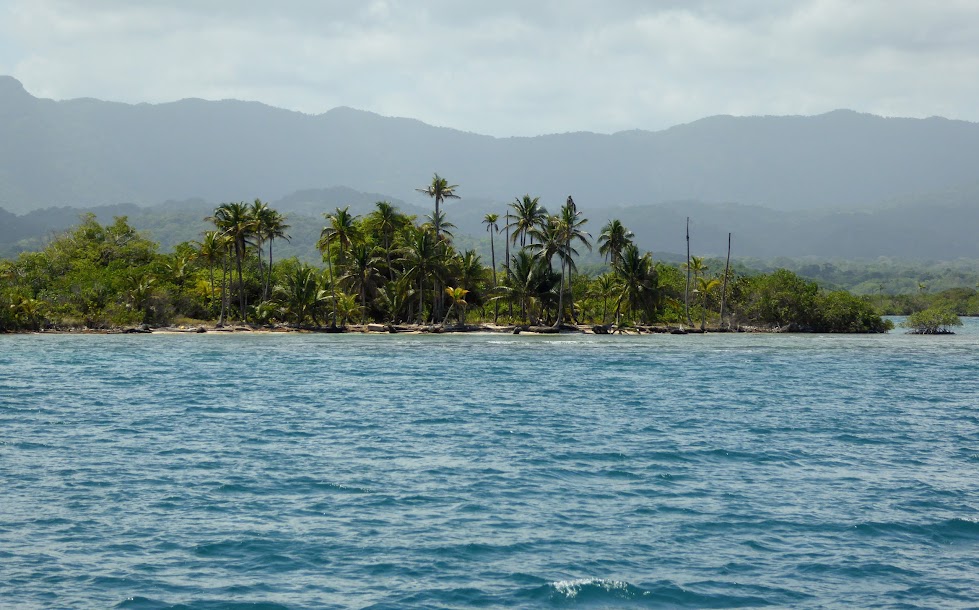 Before leaving the next morning, I sent Scott back into town to get some more guna bread, so we could stock the freezer. Again, Frederico was there at the dock to greet him, and it was a good thing. They visited seven places, before finding bread. Apparently, it’s not usually ready until early afternoon; very different from the bakeries in other countries, where fresh loaves are available first thing in the morning.

With the big city visit complete, we headed back to the swimming pool anchorage. Our friends Dani and Tate (s/v Sundowner) were expecting a guest with provisions in tow, and some of the loot was for us. On the way, Scott decided to put his fishing rods out, to see what might happen.

As luck would have it, he snagged a little tunny tuna. The poor thing threw up some icky liquid, as I performed my designated “documentation-of-fish-catch” photos. Knowing that Dani and Tate are fans of sushimi, we decided that the fish would make a nice welcome dinner for their guest. 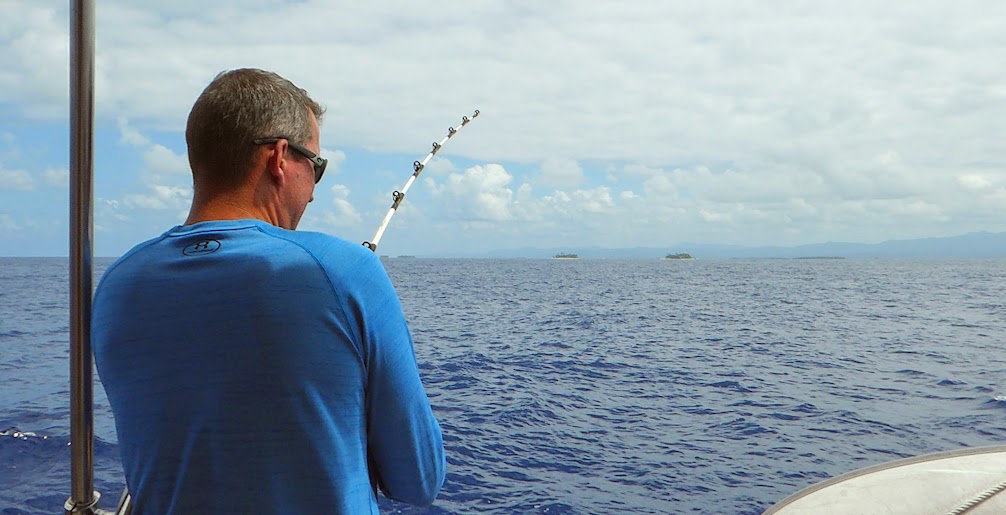 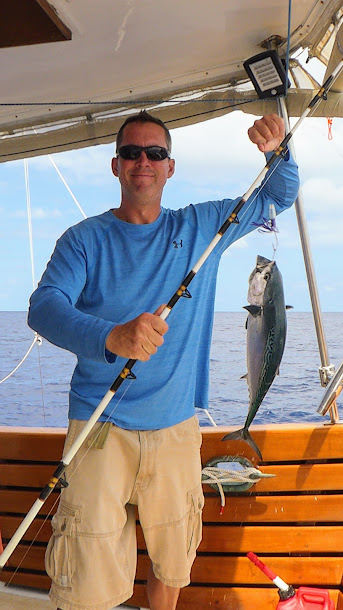 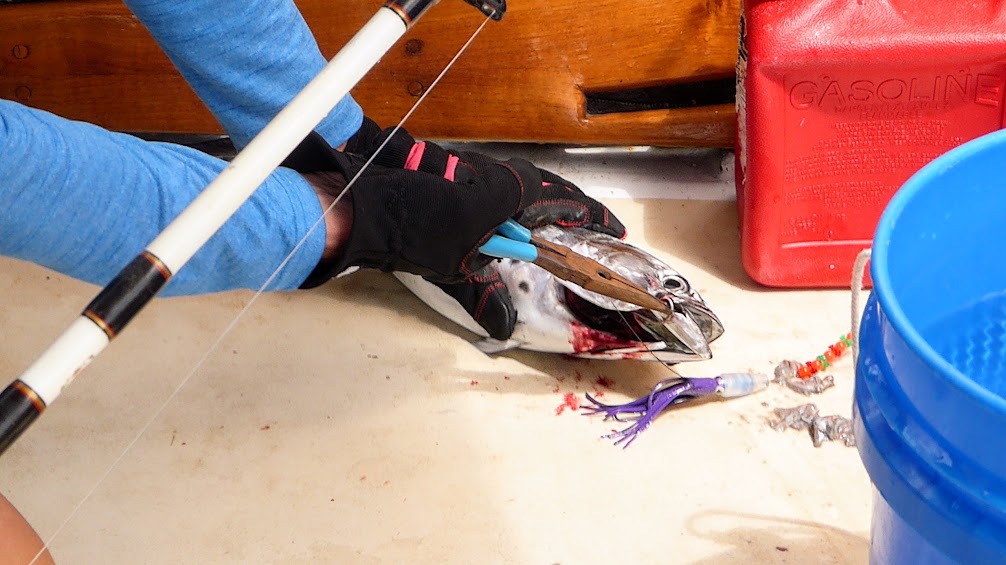 We arrived just in time for Michele’s arrival to Sundowner by panga, and headed over to collect our goodies. It took a little leg work and a bit of water travel, but we had quite a productive and satisfying 48 hours: bread and gasoline in the big city (along with some river exploration), and now butter, pretzels and bacon! Here are more photos.