Leaving Red Frog Marina, we headed back to anchor off of Bocas Town for a few days. I wanted to make a final trip to town, some  fresh produce before we continued on, and was also interested in renting a golf cart to see more of Isla Colon. After that, the plan was to anchor at several places in the area, and then head east along the coast of Panama.

Once again, Mother Nature had other plans. A tropical low was trying to form, just north of Panama, and the timing would conflict with anchoring in areas along the coast, as they don’t allow for good protection in certain wind directions.

The wind forecast was all over the place, predicting very strong stuff one day, and backing down on it the next. There was also a threat of squalls every day, but we are confident in the hulk, and decided to take it day by day, relocating if needed.

We decided to focus on the positives…the weather was breezy, more cloudy and cooler. All good things for being at anchor, and unplugged from air conditioning! We were also just a stone’s throw from a free dinghy dock, so shopping and other things in town were easy and convenient. Anchored off of town gave us unobstructed views of Costa Rica’s mountains on the horizon, and we were timed perfectly to enjoy the supermoon! 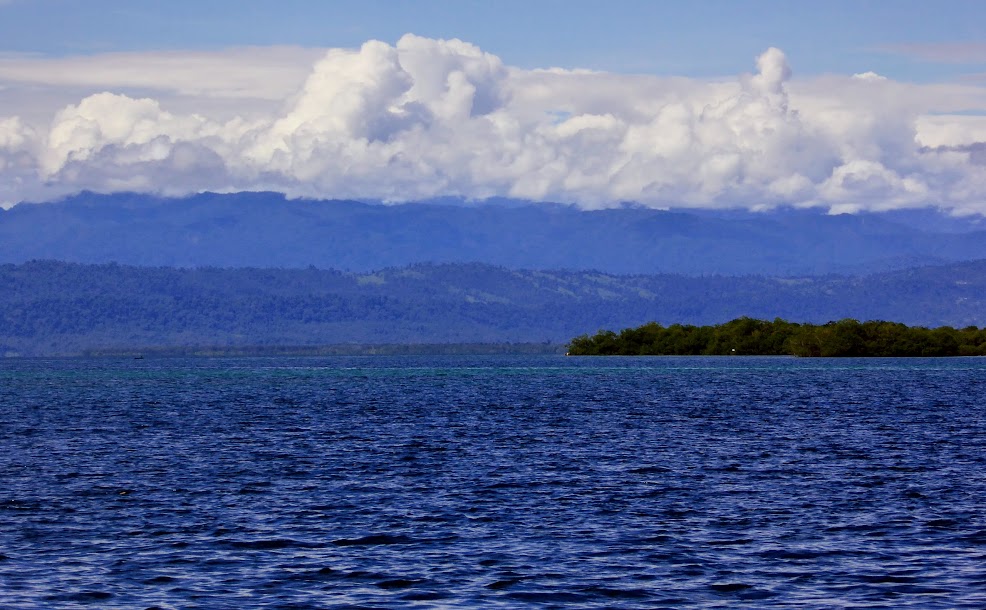 We decided to use our extra time, and have a golf cart day. There are all-terrain vehicles for rent in town, but I wasn’t interested in driving one myself, and Scott couldn’t guarantee not scaring me to death if we rode together. Helmets are required to ride the ATVs, and I’d be sitting right on top of the motor. Both of those thing spelled hot for me, so a golf cart it was.

The man behind the counter told us that we were restricted as to where on the island we could go, as the carts aren’t built to handle the condition of the roads in some areas. So of course, at the first opportunity, Scott turned to the right when he should have stayed left. 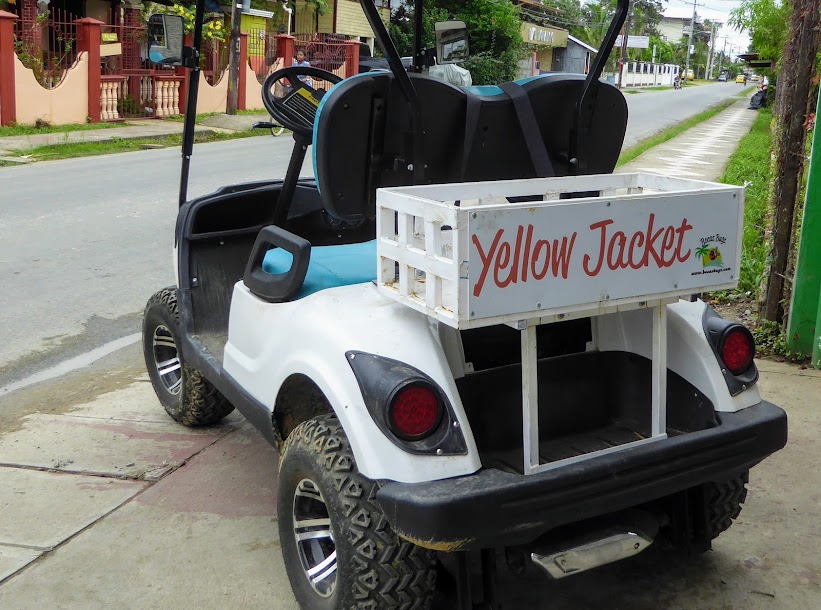 Once on the forbidden path, we passed many signs for Plastic Bottle Village, and it finally came into view.  A community of buildings and houses is in development, with used plastic bottles as core material before they are covered in concrete. The castle-like, quirky entrance was definitely eye catching. 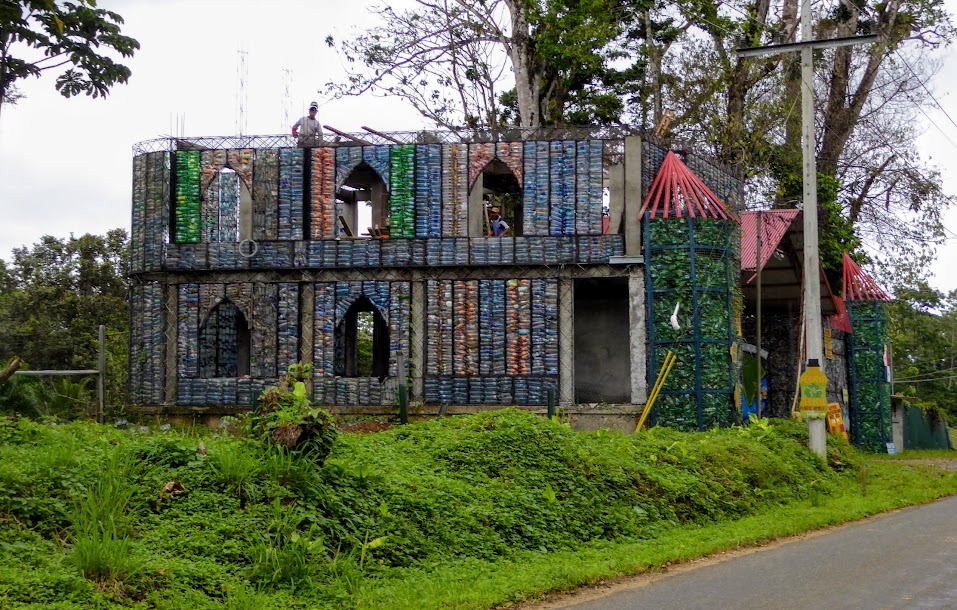 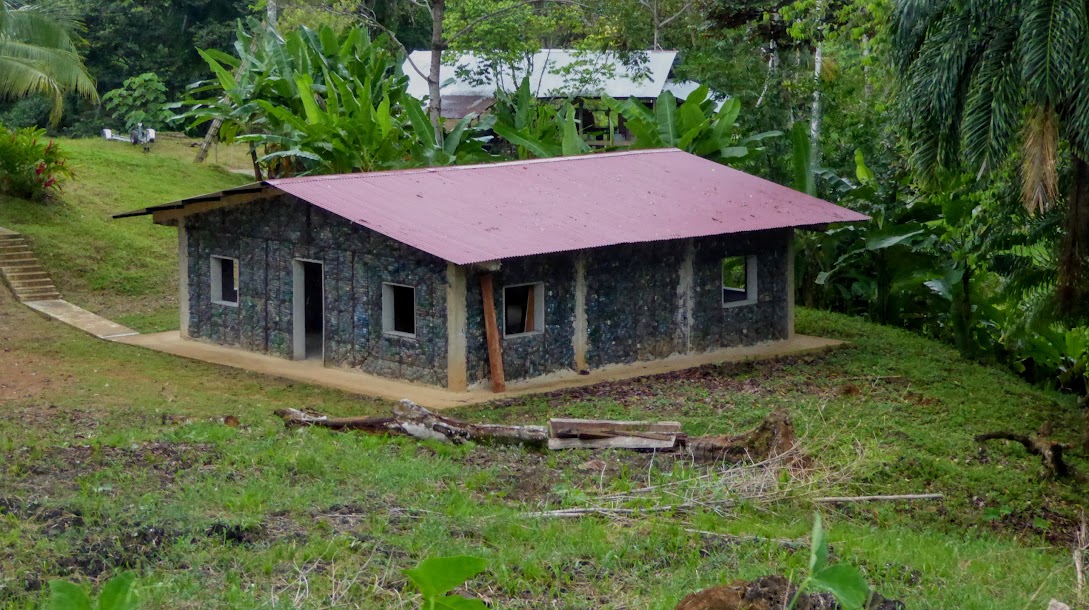 As the roads became more hilly, muddy and bumpy, we passed under a huge canopy of bamboo, thickly anchored in the ground. It was like driving in a fairy tale, and Scott wished he’d had access to bamboo this thick when building a tiki bar each year, for our  summer parties on land. 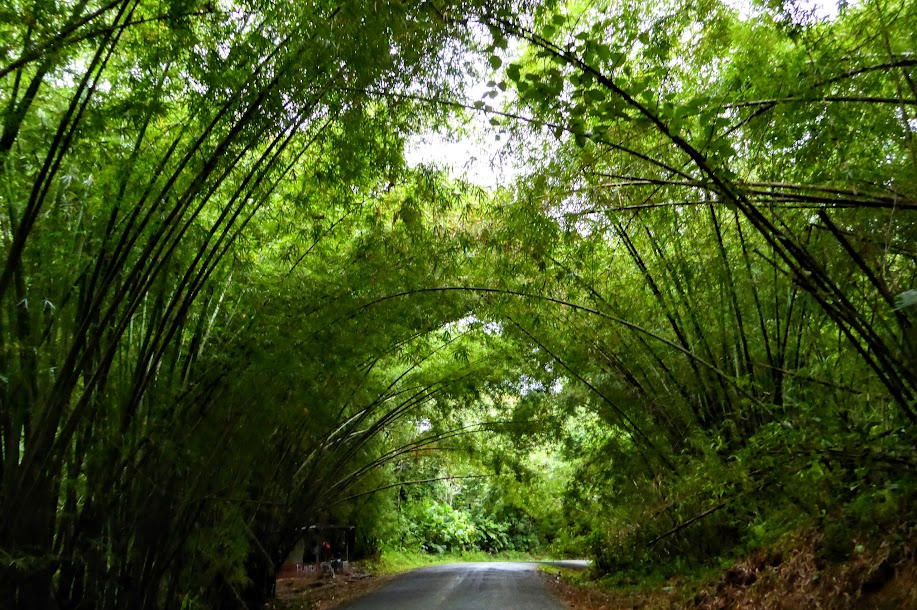 Not wanting to challenge the poor cart any further, Scott admitted defeat, and we turned around. It was lunch time, and we stopped at Scully’s for a cold drink and some food. Owned by American expats, Scully’s sits on the waterfront, with several inviting seating options. 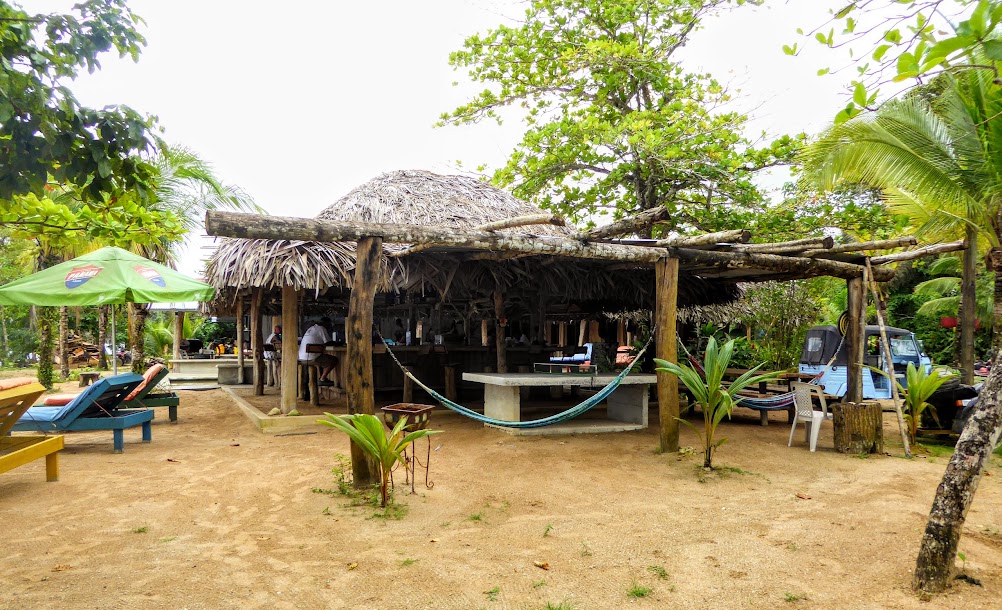 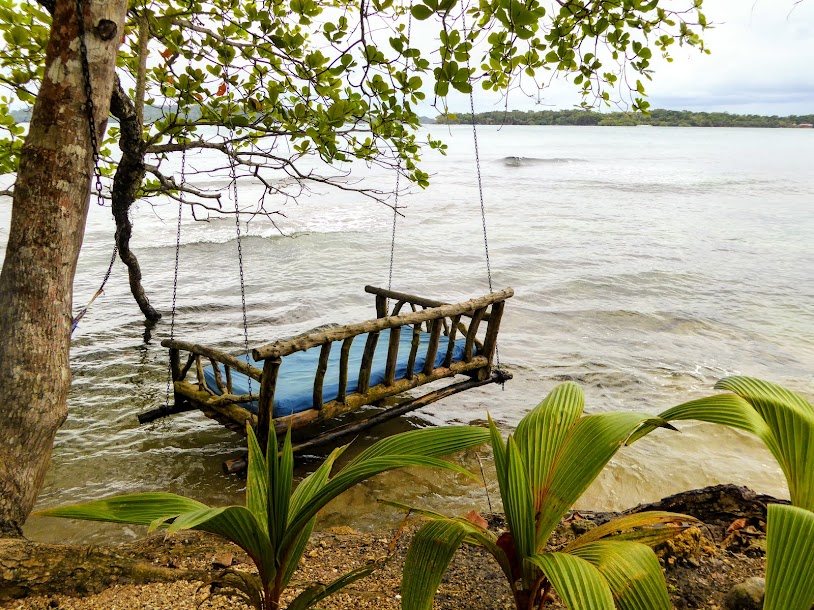 Sadly, our little cart was not the best built model. It had been stalling on us all morning, when we slowed or came to idle, and the steering was similar to that of an amusement park bumper car. I spent most of the drive holding my breath as we’d make an unexpected, hard swerve toward the edge of the road, with Scott yelling, “I can’t help it, this thing is garbage!”

While this cart definitely ran better, the steering was worse! Scott was too worried that he’d run over some poor person walking alongside the road, so we called it a day, and headed back to the rental shop. Since we’d only had the cart for just under half a day, they refunded us some money, which was fair.

Bocas had proved to be spear fish-challenged for Scott. There just weren’t many areas to find fish and lobster. However, Scott is nothing if not diligent, and finally came up lucky, bringing home four lobsters, and a black crab.

Howard was fascinated with Scott’s catch, and watched intently as Scott prepared them. Contrary to what you may think, he wasn’t interested in engaging with, or eating the crustaceans. With more than enough lobster,  and because boiling water would heat up the boat, we decided to release the crab. 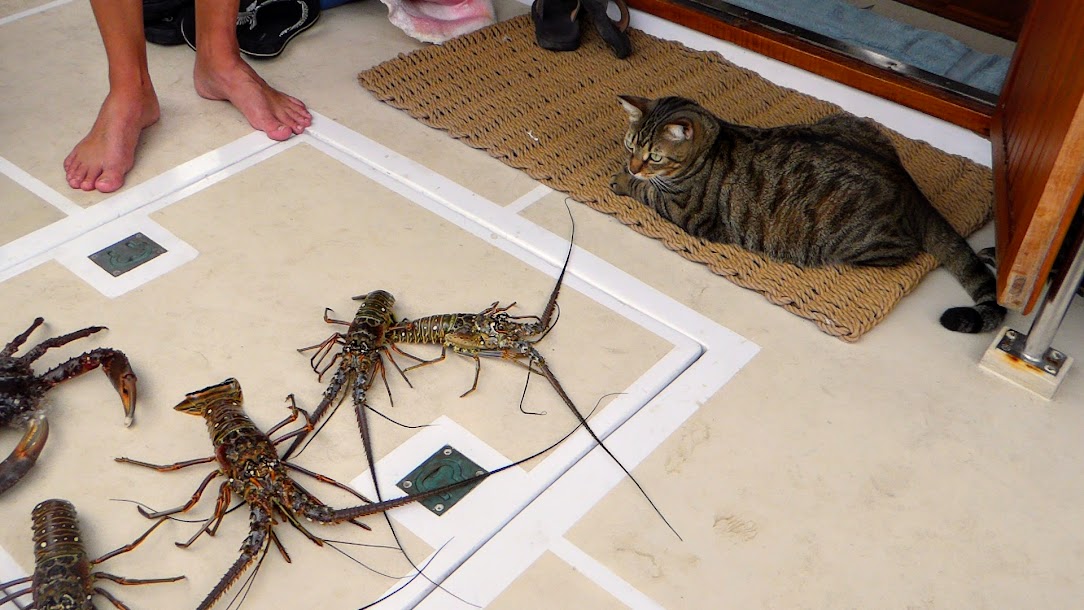 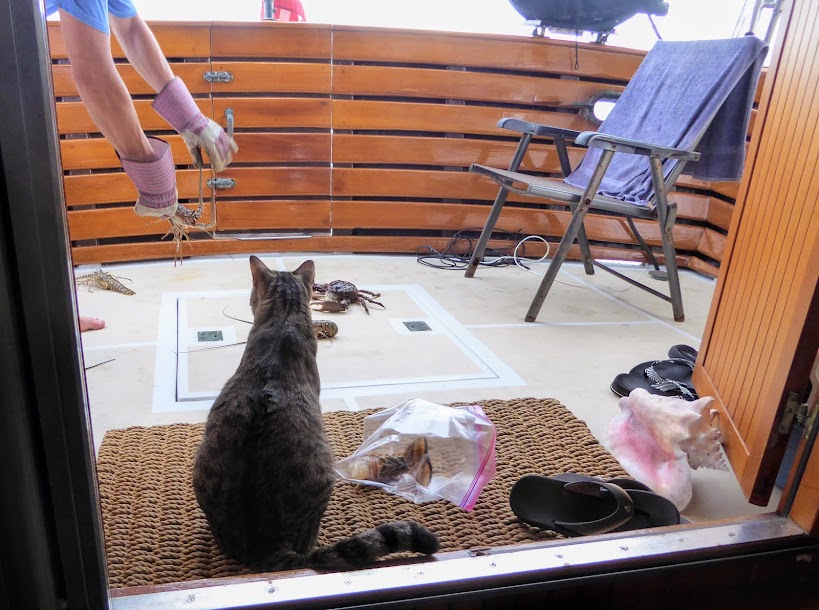 We picked up many little geckos on our decks while at Red Frog, and one has recently made it’s way inside.  Scott noticed it in the galley, near the sink, coiled up like a snake. Since then, we’ve spotted the little guy in other areas of the boat as well. 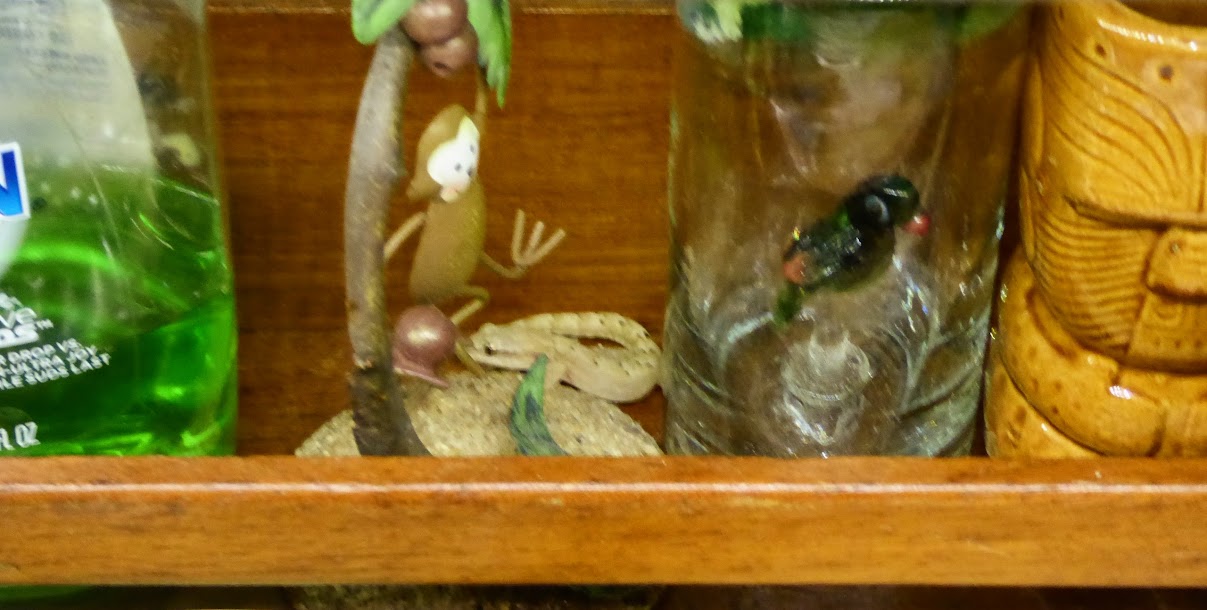 Howard has failed to notice our latest stowaway, and that thing better hope I don’t wake during the night to find it crawling across me.

Heavy rain was often visible on the horizon, and the skies became dark each day, but we managed to dodge severe weather. 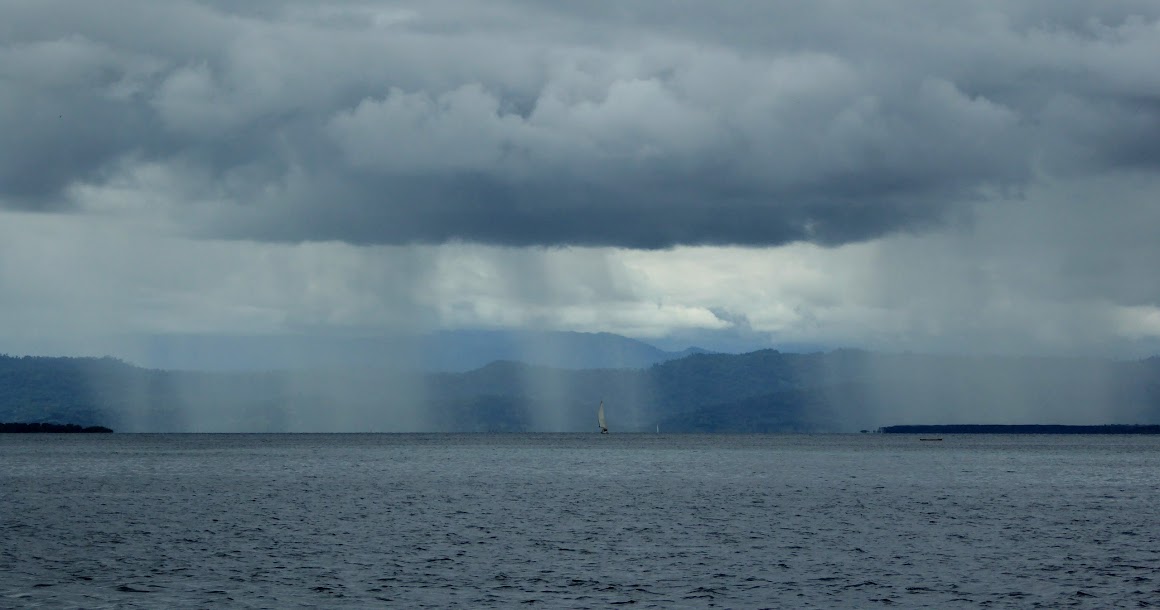 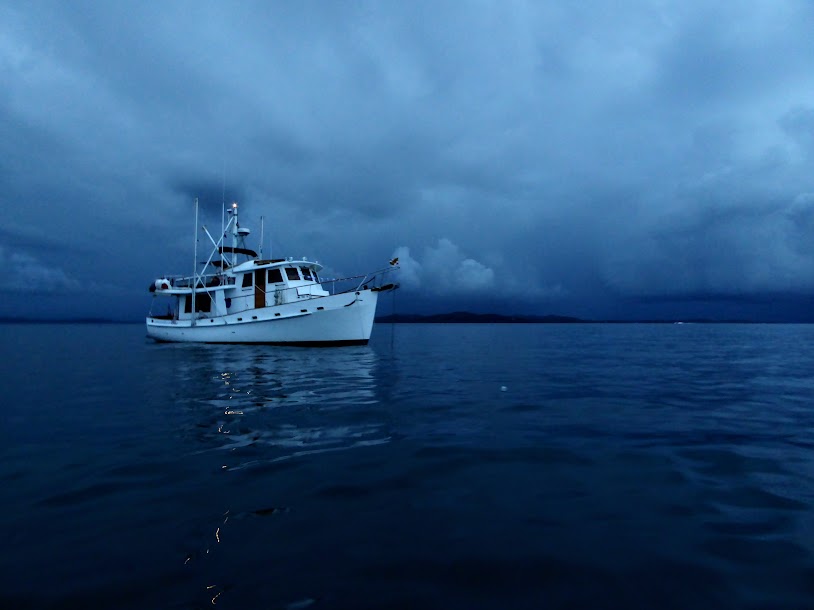 We enjoyed a few more trips into town (Scott actually requested that we revisit sushi!), and I was able to get in another barbecue night at Boca Marina’s cantina. The supermoon caused higher than normal tides, and when we arrived, it was either slosh through the water, or walk across the soggy, muddy grass. 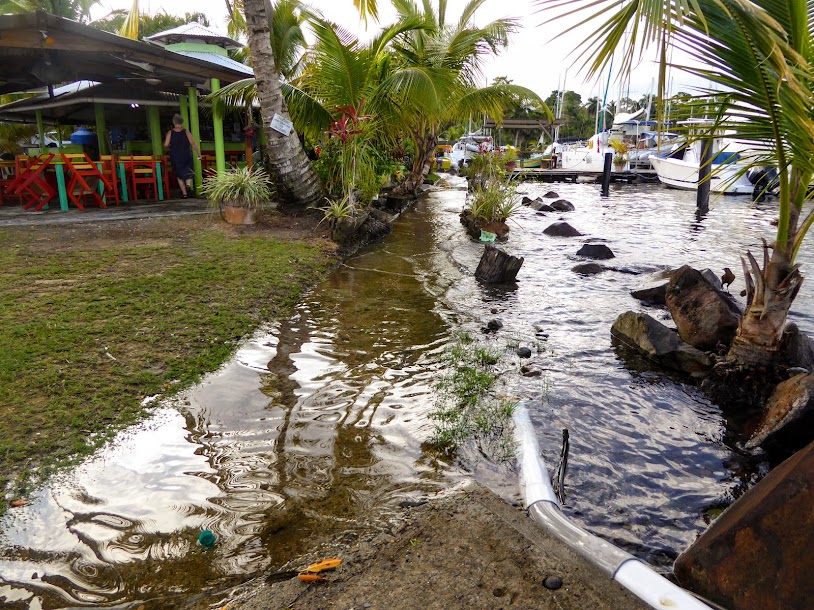 Sadly, their delicious pizza that I came for wasn’t offered on our last visit, so I settled for a less yummy burger.

Weather threat aside, we are enjoyed being back at anchor, and hoped to be on the move again soon. Here are more photos.

One thought on “Back At Anchor”