So we’re on a new island, and you guessed it, another golf cart day! We traveled to San Andres with our Aussie friends Brian and Sue in tow, and they joined us for a day of island exploring. First up, getting our golf cart out of the busy downtown area. Thankfully, all of the inner streets are one way, so we just had to focus on dodging the weaving motorcycles, trucks, cars and scooters.  The intersections are especially tricky, as there are no stop signs, and very few traffic lights.

As we made our way out of town, and around to the west end of the island, the views from the shoreline were beautiful.

We passed a small drink shack, and turned around to make a stop. Paul welcomed us, and made quick work of cutting coconut “cups” for our drinks.

We made note of the time, our earliest start yet! Oh well, it was hot enough to be noon…so close enough! Scott enjoyed the water views, while drinking from his coconut cup. 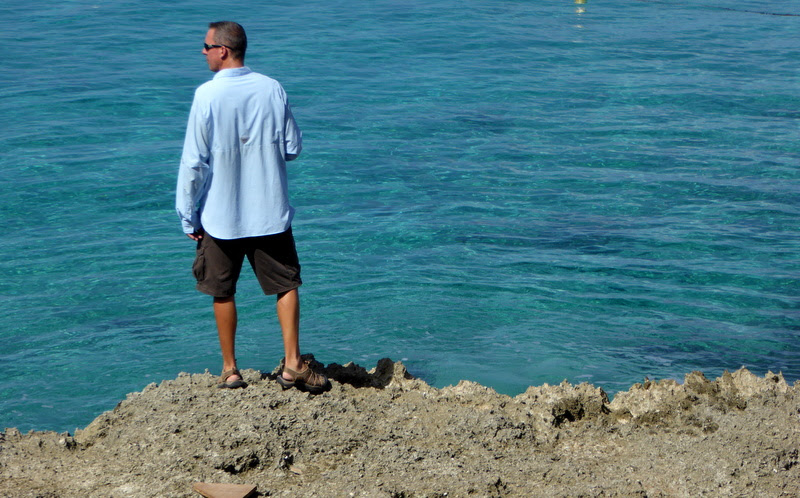 Scott and I like to see the sights, and if possible, take tours on each island that we visit. It’s a good way to get a feel for local history, and also gives a little boost to the economy.

Our first stop on San Andres was Captain Morgan’s cave. The buildings were made of stone, coral and shell, and there were several rooms displaying many things that coconuts are used for (baskets, carvings, food, etc). One room also acted as a gallery for local artists.

We made our way to the cave, which reminded me of the cenote that we visited in Mexico, with much less inviting water. The uneven, steep coral steps made it challenging to get down to the bottom.

Next stop, First Baptist Church. Located atop the highest hill on San Andres, it was established in 1847, with lumber brought from Alabama (I’m not sure why).

It’s bell tower is the highest point on the island, and offered great views. At the door, they asked 5,000 pesos from each person, to climb up ($1.60). Brian and Sue chose to stay outside, so I waited with them as Scott made the climb (I was disappointed to find out later that we could’ve also gotten some history on the church, included in $1.60, as I’ve had a hard time finding information on it).

Inside, Scott made his way up to the balcony, which has a slanted floor, and then climbed a steep ladder to some scary spiral stairs.

Next, there were some tiny, scary steps, leading to a small hole that Scott crawled through to the tower above. This process would have terrified me, and I was glad that I chose not to do this!

Even though some clouds and rain had moved in, the view was still good for a photo. You can see the downtown area at the top, spreading along the peninsula to the right.

On to the Big Pond, a freshwater lake located in the center of the island. We paid another $1.60 each, and a man walked us down to the lake. Our timing was a bit off, as it started to pour rain, making it a muddy go.

We got to meet the resident alligators, who come to eat bread that’s tossed to them. They were small in size, and Scott thought them to be decoys, diverting our attention so that larger ones could come in for the kill.

Leaving our creepy friends behind, we continued on to see a blow hole. As we approached, a man waved us down and explained that there was no charge to see the hole, but asked that we buy a drink from his stand to support his business. Fair enough…we parked our cart and ordered some drinks. Unfortunately, they weren’t the best libations, but the bar was quite a cheery place, with pretty views.

We walked a few steps over to the blow hole, which was surrounded by people and tourists shops, selling food, clothes, hats and trinkets. The ground around the hole was jagged coral, and it was hard to keep our footing. Scott and Sue made their way closer to get a better view. Strong winds would regularly gush out of the hole, but being so far from the shoreline there was never a strong enough wave force to move water up through it while we were there.

The breezes as we drove along the southeast, windward side of the island were quite strong.  The tops of many of the palm trees along the road here were just stumps.

We were starving, so it was time to find some lunch. After passing several places, stopping at one that was closed and not being able to find another, we finally stopped at Hotel Cocoplum. Our food was pretty good, and we left rested and recharged.

We never made it up, after discovering the large deck out back that extended over waves crashing on the coral.

There were two more blow holes here, that we had all to ourselves. Scott and Sue investigated up close again, and Sue received a refreshing “facial.” We had a drink, watched the blow holes and hung with the residents.

Our rental car was due back soon, so we headed to town on a route that took us back up the highest hill and past the First Baptist Church. Now that the sun was out, we stopped for some final photos of the view below.

By the time we dropped the cart off, I was spent. The noise of our cart, other carts, cars, motorcycles and buses had worn me out, and the 93 degree sun had taken its toll. However, I always enjoy golf cart days. They’re a great way to get a good overview of an island, and we usually have friends along for the ride. Here are more photos of our golf cart day on San Andres.

One thought on “A Golf Cart Day On San Andres”