We’ve been in Providencia for six weeks, which is much longer than planned….too long, as locals are starting to recognize us. They nod and wave to us on the street in town, Delmar yelled from his scooter as he whizzed by us on our third rented golf buggy and the woman who runs the restaurant where we play Jenga and dominoes recognized us and said hello as we ate pizza on the other side of the island!

Why have we been stuck here so long? How can the winds possibly blow this long and hard?? Well, here is the dumbed-down version of Scott’s explanation: There is a sub-tropical ridge (a high pressure feature) that is unusually far south, and hasn’t budged. At the same time, the low pressure system that is always over Colombia is unusually strong. There is also a strong low pressure system in the Eastern Pacific, which refuses to move.

To have all three of these things happening at the same time is not “normal.”  Providencia is caught between these weather features, and is consequently stuck in a wind “bubble.” To the north, in Mexico, virtually nothing. South of us, in Panama, light and variable. Here, 20-25 knots, with many days blowing 30+ knots. All that winds causes the swells to run between 8 and 10 feet, with breaking waves….like a cherry on a sh*# sundae!

So this is why we’re still here, settling into day-to-day life on Providencia. There are nine of us who plan to head south. Some are not in hurry, and will leave in a month or two. Others, like us, are itching to change scenery and move south.

While we wait, there have been many ideas tossed around to fill up our time here, now that we’ve done hiking, horse races and golf buggys to death, and have visited Delmar for Cocolocos so often that it’s put a dent in the coconut supply. 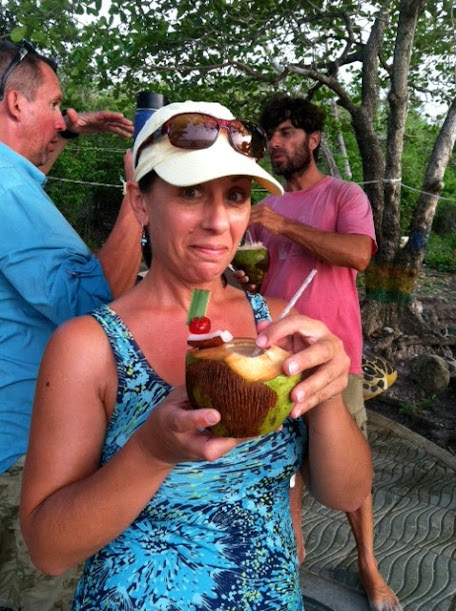 My sister suggested that we reclaim Pablo Escobar’s house, as a cruiser crash pad. It’s a great idea, but hauling water up that hill, to fill the pool would be a real pain in the ass.

Scott considered getting a job, but with a 98% unemployment rate, on an island of 5,000 residents, the possibilities are slim.

I worry that Scott and Kevin will resort to joining the local men who gather in the park to drink and watch traffic go by, while sitting in Providencia’s both indoor and outdoor furniture of choice…the molded plastic chair. As far as I know, there are no rehab facilities on the island, so I hope it doesn’t come to that.

The Americans here in the anchorage gathered on Sea Life for a 4th of July cook out, and we spent an afternoon playing Jenga at a local restaurant (it’s hard to balance blocks at anchor).

One evening we met on Jack and Monique’s catamaran, s/v Aloha (I am so jealous of their huge, open cockpit!) to celebrate our friend Rachel’s birthday. As I’ve mentioned, she and her husband are from Baltimore!

Scott’s spent many hours hanging from the paravane on his air chair, a gift from my sister that has transitioned well to cruising life. Thanks Sally!

Kevin spent a few afternoons showing some cruising friends the beginnings of kite boarding. It proved challenging in the strong, gusty winds. They ended up being dragged through the water, and often catapulted up into the air, before being thrust back down again. At least they got their exercise for the day!

Our friend, Pete, kayaked through the lesson with his dog Budders in tow. She’s a skilled kayak passenger.

Budders frequently takes a swim off of the kayak, and knows how to countdown for a jump-in, in four languages!

Sooo, after weeks of living like locals here, today we finally get to make our exit! The winds are down significantly over the next few days, causing the seas to calm a bit as well. We’ll make our way to San Andres, another Colombian-owned island 10-11 hours south of here. It’s a more developed and touristy sister to Providencia’s quiet villages and surrounding mountains.

Follow us on our Delorme tracker, through the Where Are We Now page of our blog. In the meantime, here are more photos.