We rented a two-person buggy, to save a few dollars. Based on the bench size of our previous one, we felt there would be plenty of room for three, and no need for a back seat. The buggy truly was a two-person, and it made for a snug ride. Scott drove this time, and I kept trying to reign him in on the curves and turns, for fear that Kevin would fly out of the buggy!

We made our way to Caribbean Place Donde Martin for dinner. This time, we’d called ahead for a reservation.

The food was great! Kevin amused our server by having her practice her English on us. I think this went over well, due to the fact that he speaks more than a fair amount of Spanish.

After our meal, we drove back through town, and into a large group of people who were gathered near the bridge to Catalina Island. There is a bar here, but we’d never seen it open until now, and there were more patrons on the sidewalks and street than inside. The whole scene reminded me of hanging out at the mall on a weekend  night when you were young, or riding around searching for “something going on.”

It was an inviting scene, so we parked the buggy, ordered beer from the bar and found a place to people watch from the sidewalk.

The next morning, we were off on the buggy to Southwest Bay, determined to see a horse race. As we came around a turn, and up a hill, we came right up on a herd of cattle crossing the street.

Maybe I should say sauntering, as they seemed unfazed by us, and the other traffic that swerved around them at full speed. The man herding them didn’t seem in a hurry either. Island time, I suppose.

When we arrived at Southwest Bay, it was clear that we were very, very early. We inquired about the race, and were told that yes, there would be one, at 1:00. Since the restaurant’s kitchen was just getting their fire going, we decided to have lunch elsewhere, and come back for the race.

I’d read about Roland’s Reggae Bar, on the east side of the island. Since we had transportation, this seemed like a good time to check it out. On the way, we encountered two more cows, just wandering aimlessly up the road. Each one “yelled” loudly at us as we sped by. Their horns made Scott nervous, being in a vehicle with no doors!

It was very quiet at Roland’s, and we were told that Friday night’s band and crowd had lasted until the wee hours. A friendly woman served us drinks while her children played nearby in the sand. We ordered grilled lobster, stewed crab and grilled fish for lunch (with Miller Genuine Draft beers) and enjoyed the atmosphere.

Roland’s is on the windward side of the island, so the water here is more rough, but the breezes were terrific.

I hoped they were enough to keep the sand fleas at bay, since I’d left my bug spray back on the boat! I even grabbed a rake, and worked the sand under our table, just for good measure.

It was nearing race time, so we made our way back to Southwest Bay. We didn’t encounter any cows this time, but as we made our way down the road that ends at Southwest Bay, there was a huge crowd that spread across the street in front of one of the small convenience stores.

I think it also acts as a restaurant and bar, due to the music coming out of a stack of speakers the size of a truck. It was deafening, as we squeezed through the crowd who parted for us to move through, smiling and waving as we passed by. It seemed like the island equivalent of tailgating!

Back at the beach, there were a decent amount of people milling about and eating at the restaurant, but no real crowd. We asked again if there would be a race, and were told yes!..at 2:30. Again…island time, so we sat at a table, ordered a beer, and waited.

Before long, a steady stream of motorcycles and scooters began to stream into the beach area, and farther down the beach, near the start point, a crowd was growing as well. 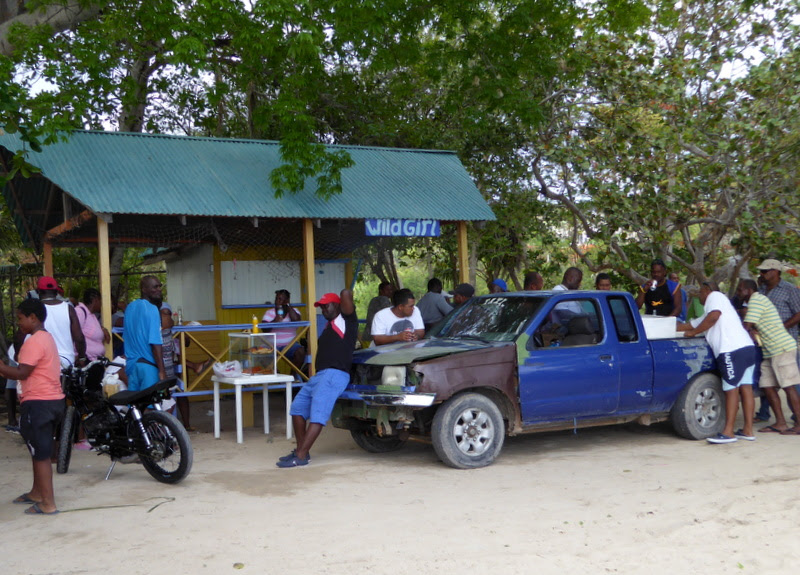 We have learned that there are only two horses, who run one race, and it is amazing to see the crowd that forms just to see this one race. Today’s race was “friendly,” with a more serious one being run on Monday (when a large cash prize is awarded). As we waited, one of horses took a practice run down the beach. A local man told us that he was the favorite, being a thoroughbred. The jockey “worked” the crowd on his way back up toward the starting point.

Soon after, we spotted two horses coming at us in the distance….. the race was on!

As they approached, the crowd crept into the path of the oncoming horses, cheering “Thoroughbred! Thoroughbred!” The “thoroughbred” did win, as predicted. We later learned that the second horse was a only 3/4 thoroughbred…..well no wonder he lost! As the winner took a victory lap, the loser disappeared into the crowd, taking a shortcut off of the beach.

Once the race was over, the crowd began to stream off of the beach on foot, scooters and in cars. We hadn’t seen a police officer all day, and the crowd was incredibly well behaved. Everyone patiently waited their turn to leave, happily chatting back and forth.

Once the crowd had thinned a bit, we squeezed back into the bench seat of our buggy and headed out. The crowd streaming out from the convenience store was even larger as we came back through, and I think they’d turned up the volume a few more notches!

There was still time left before the buggy had to be returned, so we went back to Roland’s for a bit. On the way…you guessed it, we had to swerve around another cow. This one seemed completely oblivious to us, as we motored past.

As we made our way back to town, we came upon the same herd that had crossed our path that morning. I guess they too were headed home after a long day.

So after a great dinner out, and a day of cows, reggae and finally seeing a horse race, we returned our little buggy, with a few more Providencia “must dos” checked off the list. Here are more photos.